Wiveliscombe was made a Railway Sub-Office (R.S.O.) in October 1874, and remained one until 1905 when the "R.S.O." terminology was abandoned, when it became a Sub-Office/Post Town.

The "WIVELISCOMBE R.S.O. / SOMERSET" cancel remained in use after 1905 (see the first item below). 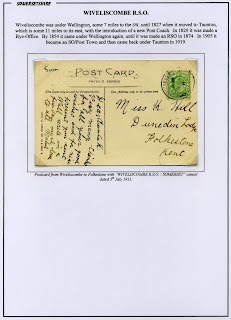 It was eventually replaced with a "WIVELISCOMBE - S.O. / SOMERSET" double-circle, double-arc cancel - here are two examples used in 1914 and 1915. 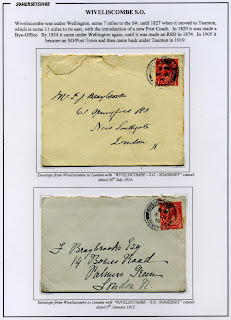 In November 1919 Wiveliscombe came under Taunton again - here is a "WIVELISCOMBE / TAUNTON.SOM" cancel from 1942. 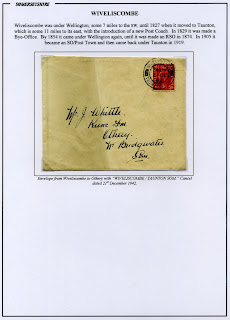 Email ThisBlogThis!Share to TwitterShare to FacebookShare to Pinterest
Labels: RSO, SO, Wiveliscombe