There are a few periods when no Bath postmark is known.  Here is an example of an entire from Bath to Chelmsford (via London) in June 1719, with a London transit bishop mark dated 25th June but no Bath mark.  No Bath mark is currently known from 1717 to 1719. 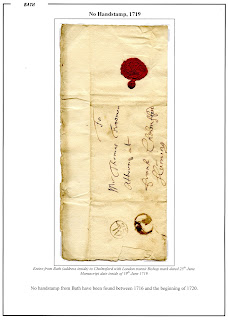 Similarly no Bath mark is known from 1727 to 1729.  This entire, dated October 1728, is to Edinburgh via London, with a London transit bishop mark dated 16th October but has no Bath mark. 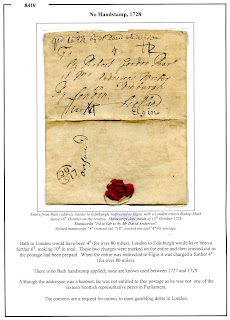 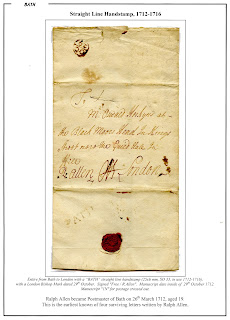 The contents are some accounts: 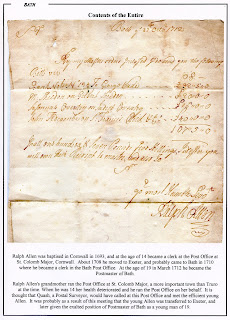 Here are two entires addressed to Oliver Le Neve at Benjoy's Coffee House in Bath in May and June 1709.  They are both from Norfolk hoping "that you may come from the Bath quite recovered". 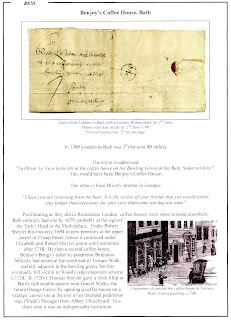 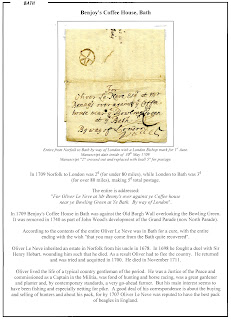 Here is a map of the part of Bath where Benjoy's Coffee House stood. 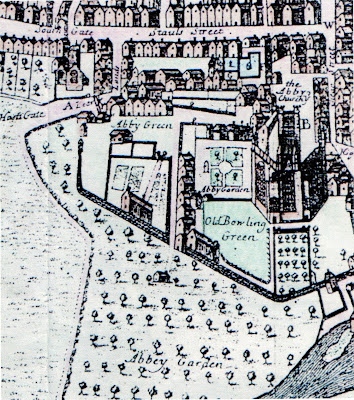 Two more examples of the early Bath handstamps, firstly another example of the the first handstamp (known 1706-1708) from April 1707.   This went from Bath to Ireland, via London. 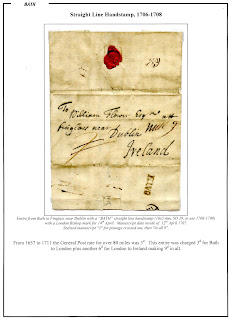 Secondly an example of the second Bath handstamp (known 1708) from September 1708, from Bath to London. 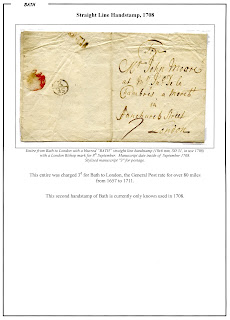 Bath first handstamp - the contents of the entire

In the previous post I showed an early example of Bath's first handstamp, written before the Treaties of Union of Scotland and England.

The contents of the entire relates directly to these Treaties.  Here is an image of the contents ... 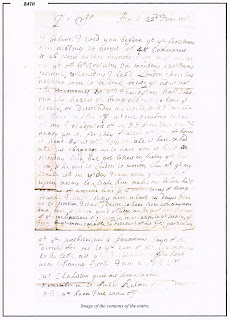 ... and here is a transcription.  It appears that the entire was sent by Sir George Lockhart of Carnwath who was one of the "Treaters" from Scotland.  He was the only one who did not sign the agreement and in the entire it says that he had just left London to escape having to sign it. 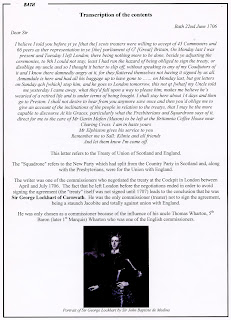 Email ThisBlogThis!Share to TwitterShare to FacebookShare to Pinterest
Labels: Bath, Treaty of Union

The next series of posts will cover most of the early handstamps from Bath - with a few exceptions, one of the exceptions being the "BATH-X" cross-post handstamp of which only one example from June 1710 is known.

Here is an entire with an example of Bath's first handstamp from 1706, sent to Leith and going via London, picking up a London bishop mark of 24th June in transit.  The earliest known example of this handstamp resides in Bath Postal Museum and is dated 15th March 1705/6. 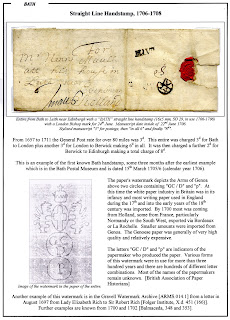 The entire was written on imported paper from Genoa, as evidenced by the watermark.

Wrington, 13 miles SW of Bristol, was in the Bristol Fifth Clause Post from 1805.  It was issued with post office number B23. 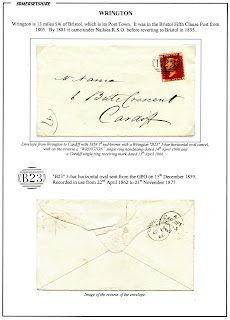 Yatton, 14 miles WSW of Bristol, became an RSO in 1861 and was issued with post office number B21. 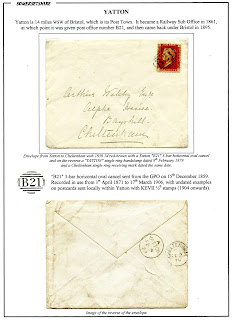 The following three postcards with "B21" 3HOS cancels were sent within Yatton and do not have any date markings.  Based on the KEVII stamps they cannot be any earlier than 1904.  The 1911 census indicates that the Hiam family had moved to Berkshire by then so they cannot be as late as 1911.  Eva Hiam was born c.1901 and Cecily c.1904 so it is probable that the cards date from 1904-1906. 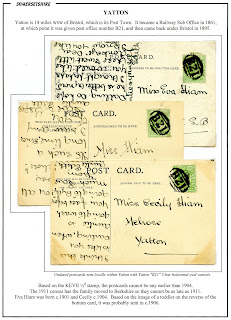 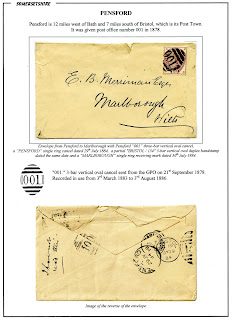 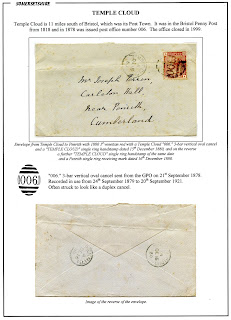 West Town, 9 miles WSW of Bristol, was in the Bristol Penny Post from 1824.  It became an RSO in 1861 and was allocated post office number B45.  It had both 3HOS and 3VOS cancels; the first sheet shows a 3HOS on cover while the second sheet shows both types of cancel on stamp. 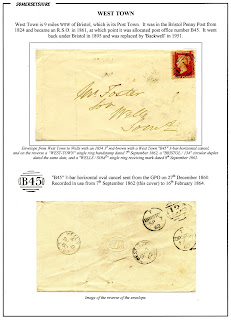 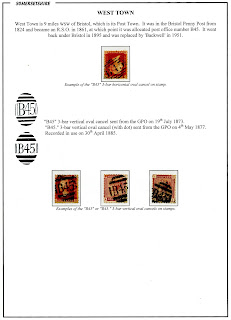