Below is a nice example of a black Maltese Cross on an 1841 1d red-brown, with a manuscript filing date inside of September 1841, alongside a "BRUTON" double-arc undated handstamp. 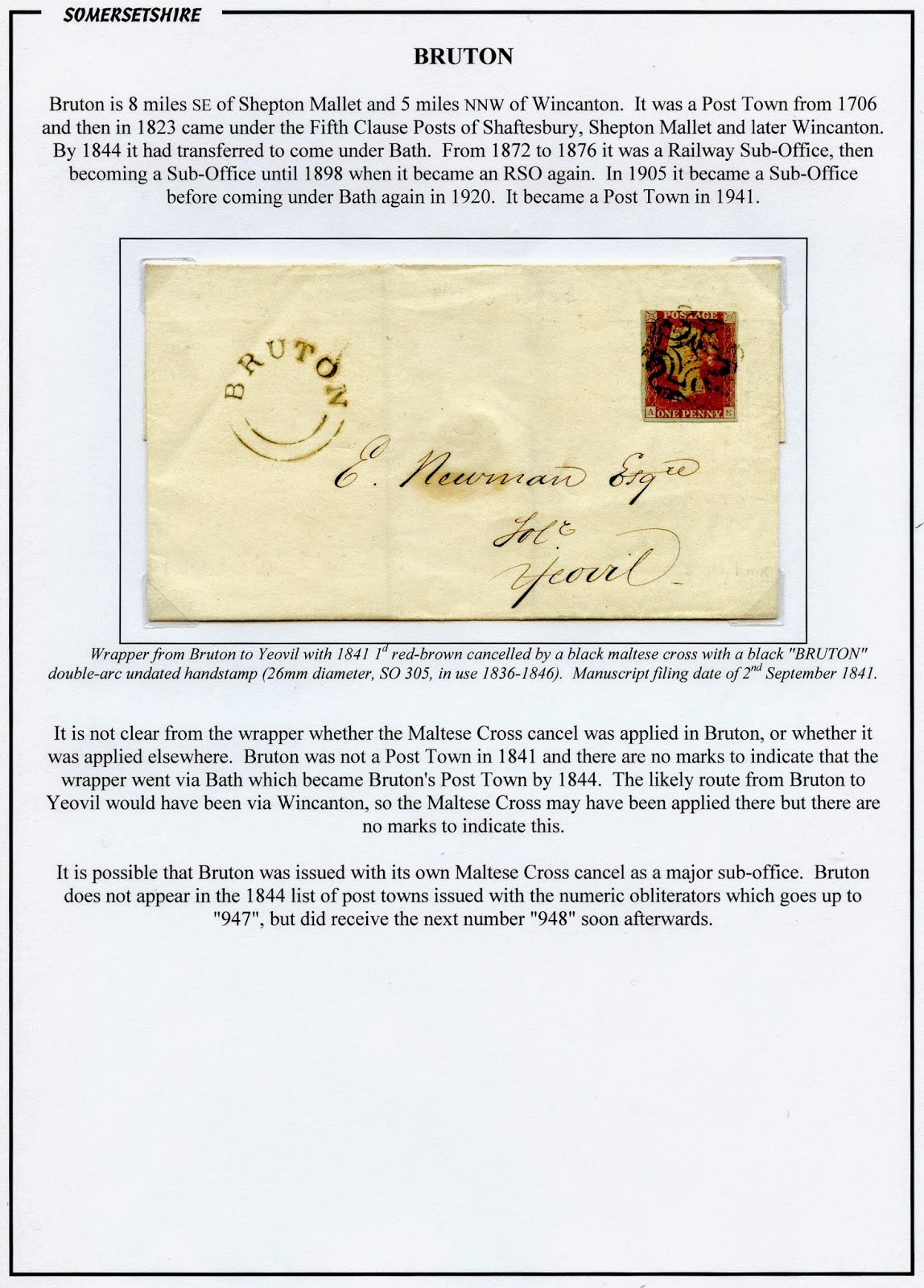 However Bruton was not a Post Town in 1841, although it had been previously.  Before the introduction of the Uniform Penny Post it was under the Fifth Clause Posts of Wincanton and Shepton Mallet.  By 1844 it came under Bath.  One assumption would be that the Maltese Cross was applied in Wincanton en route to Yeovil.  However there are no Wincanton marks to confirm this (both my examples of Wincanton Maltese Crosses have other clear Wincanton marks as seen below). 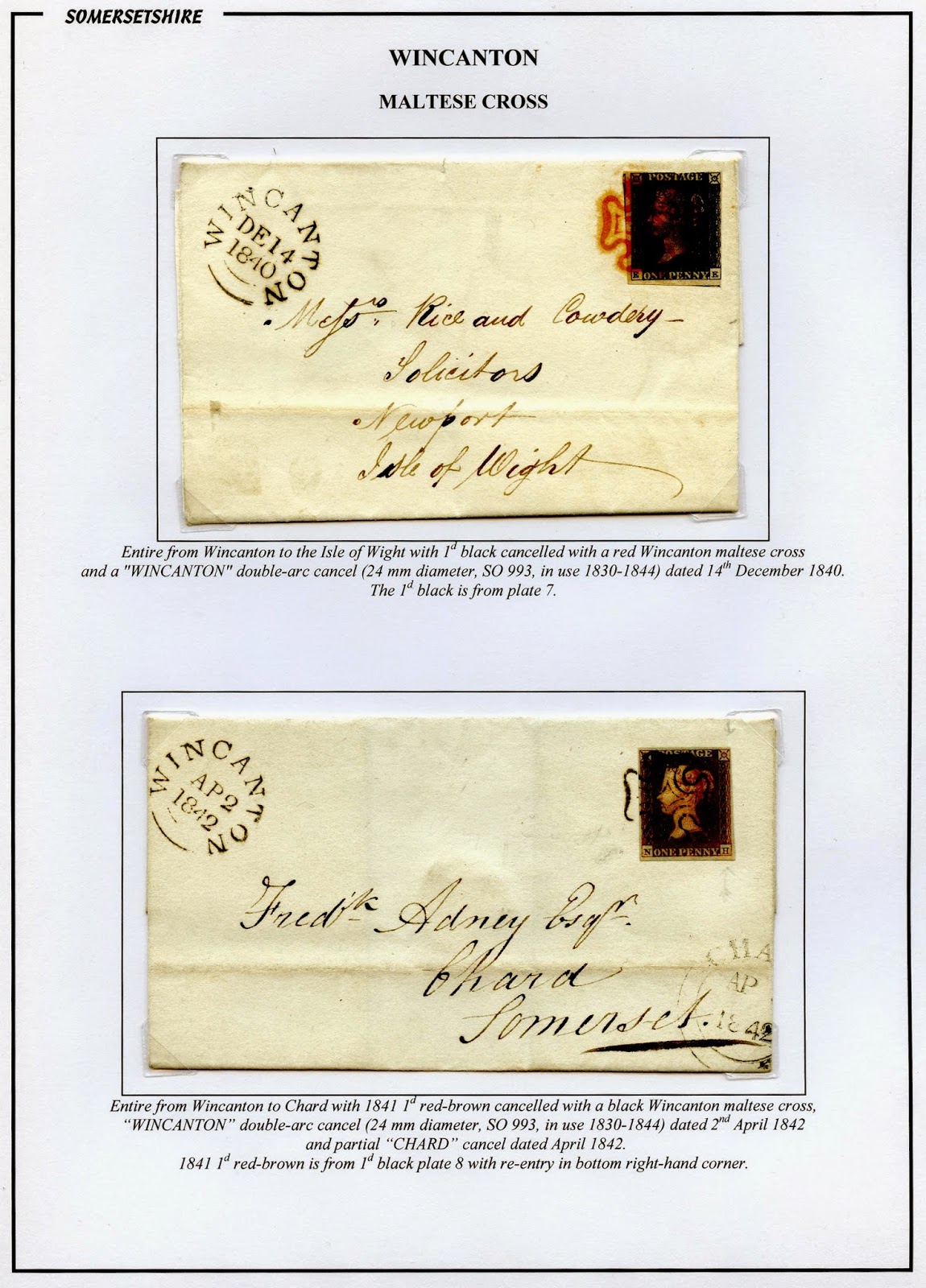 However Bruton was a major sub-office, and although it does not appear in the 1844 list of post-towns issued with the barred numeral obliterators, which went up to number "947", it did receive the next number "948".
Posted by Leamphil at 07:00 2 comments:

Following on from the previous post, here is an example of a Martock (726) Maltese Cross cancel in red on a 1d black, from July 1840.  The cancel is quite faint but can be clearly seen with a glass. 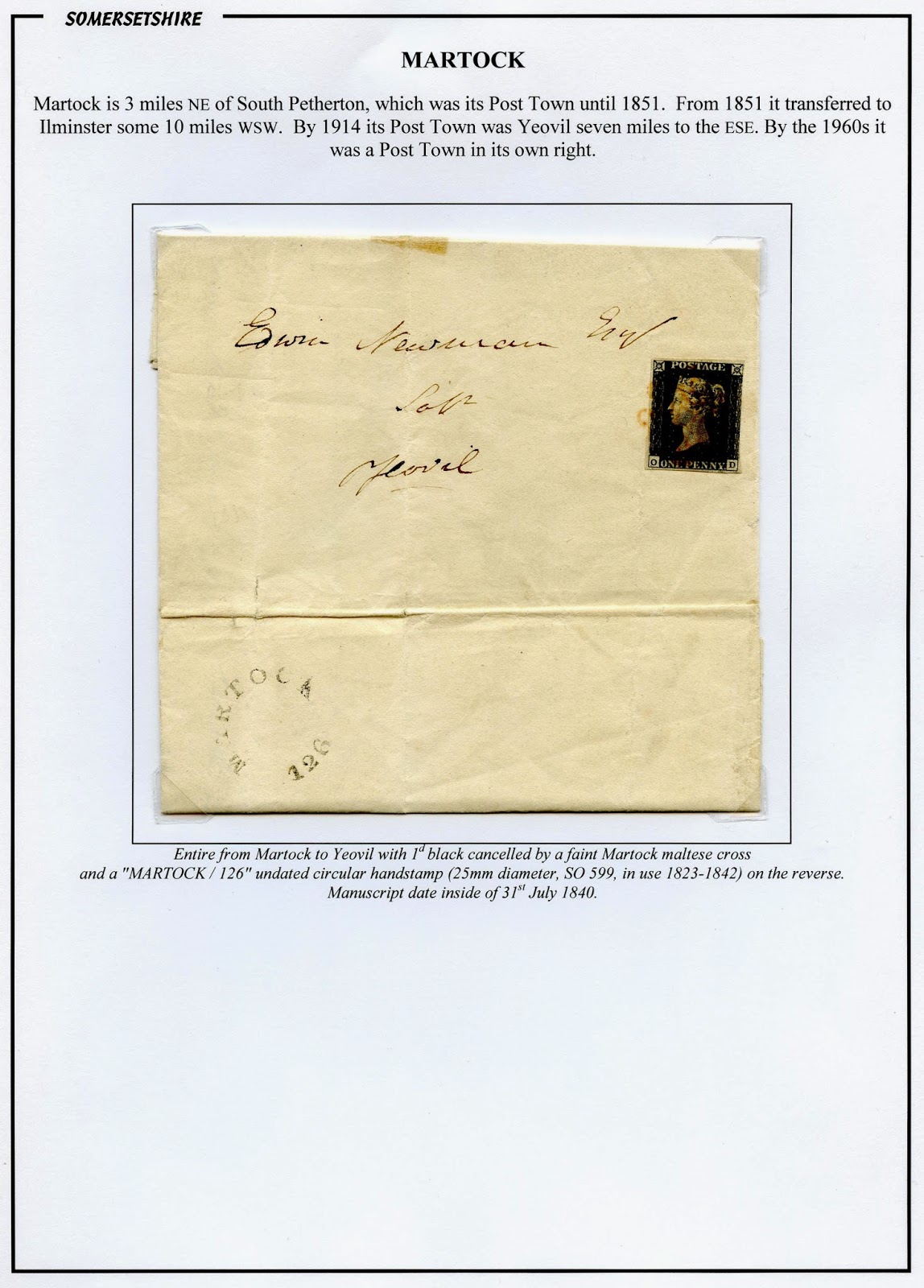 It is not known exactly which Towns in Somerset (or elsewhere in the UK) were issued with Maltese Cross cancels.  The first candidates come from the list of Post Towns that received Barred Numeral cancels in 1844.

The two sheets below confirm that Shepton Mallet (701) did receive a Maltese Cross, the first being an example of a red cancel in September 1840 and the second of a black cancel in February 1842. 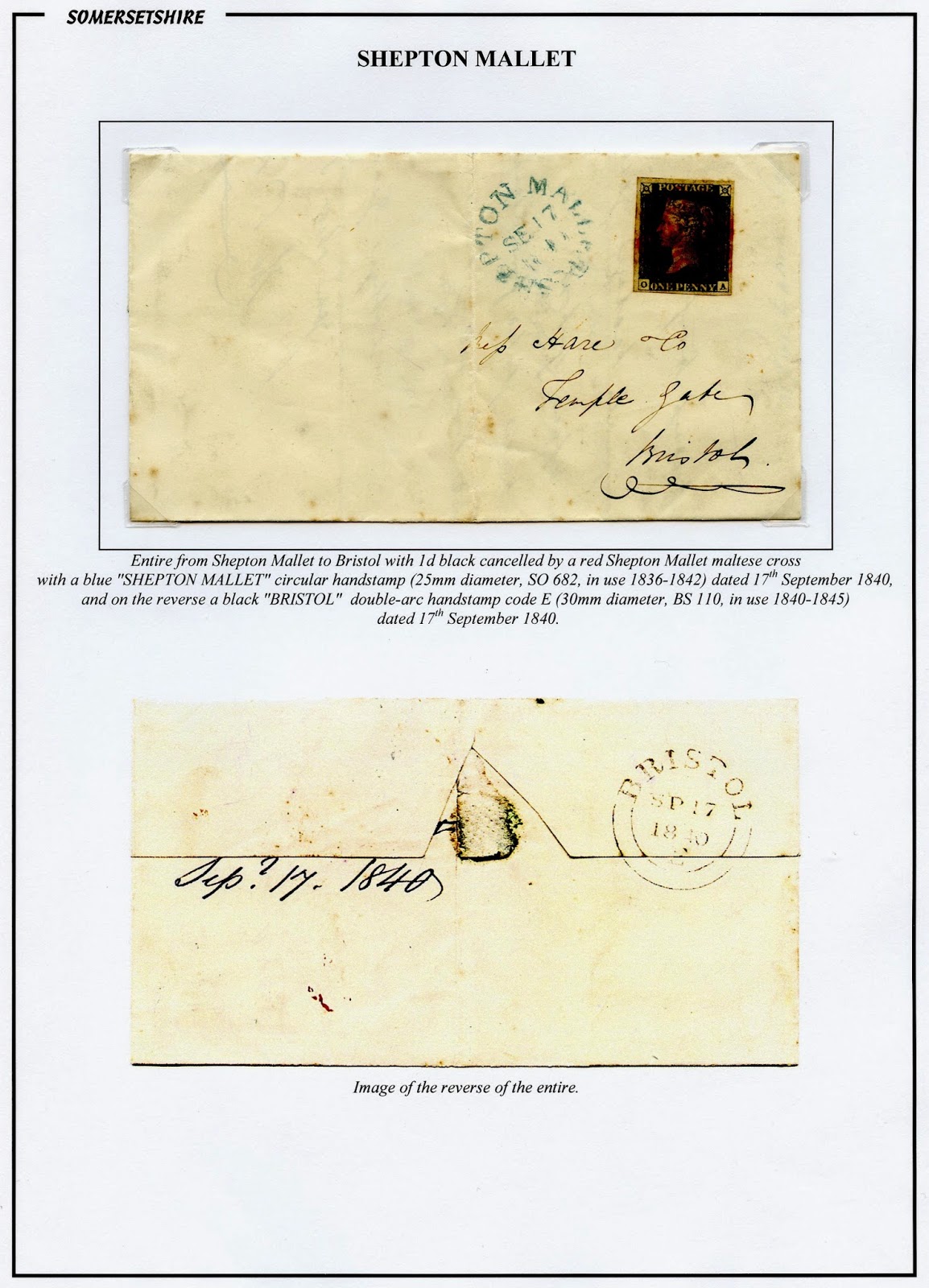 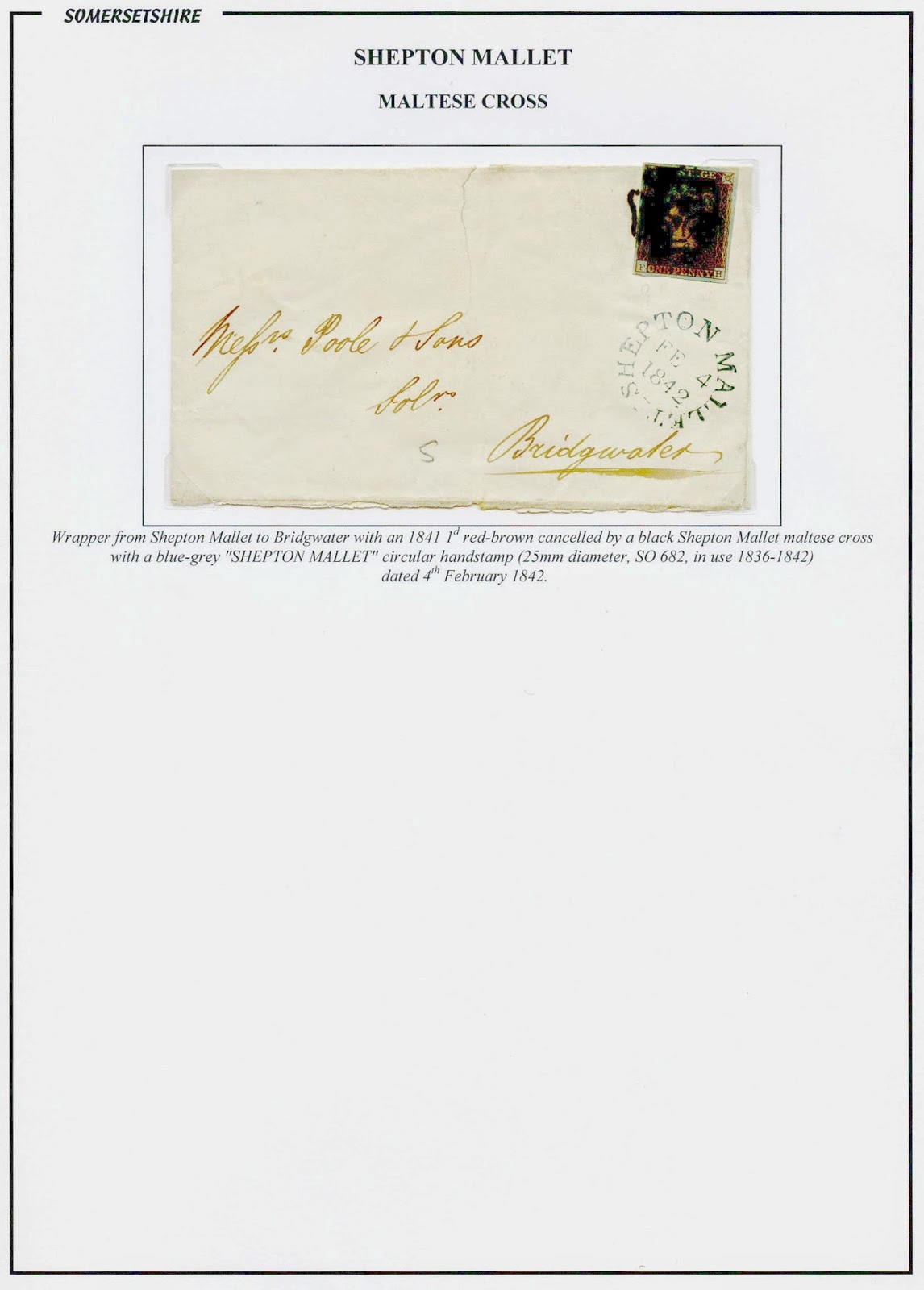 The floods in Somerset earlier this year (2014) caused widespread disruption, particularly to the farming communities.  The following gives some background to the management of water within Somerset.

The Somerset Levels and Moors is a sparsely populated coastal plain and wetland area of central Somerset, running south from the Mendip Hills to the Blackdown Hills.  The Levels occupy an area of about 160,000 acres and are bisected by the Polden Hills; the areas to the south are drained by the River Parrett, and the areas to the North by the rivers Axe and Brue. The Mendip Hills separate the Somerset Levels from the North Somerset Levels. The Somerset Levels consist of marine clay "levels" along the coast, and inland (often peat-based) "moors".  One explanation for the county of Somerset's name is that, in prehistory, because of winter flooding people restricted their use of the Levels to the summer, leading to a derivation from Sumorsaete, meaning land of the summer people.

Commissioners of Sewers for Somerset had been functioning from the late medieval period (setup by the Statute of Sewers of 1531) over an area of about 160,000 acres although records of their activities survive locally only from the 18th century. A system of 'dole' work developed whereby landowners undertook allotted portions of works which were overseen by the viewers or dyke reeves who made presentments at the sewers sessions for their division.

Late 18th century and early 19th century schemes, eg. Axe, Brue and King's Sedgemoor Drainage, imposed further duties of maintenance of artificial streams. The responsibilities for these schemes devolved on the commissioners of sewers following the completion of works specified in the acts.

The River Tone remained under the view of the Conservators of the Tone, although from 1877 works were undertaken by the Drainage Commissioners. The Parrett Navigation Company, formed in 1836, took over navigation responsibilities for that river but was insolvent by 1860. Following the Land Drainage Act (1861) five drainage districts were set up for the Parrett hinterland, Chedzoy, Aller Moor, Stanmoor, Curry Moor and North Moor, and commissioners of sewers were appointed for the King's Sedgemoor district, thus removing it from the Langport and Bridgwater divisions.  General Commissioners for Othery, Middlezoy and Westonzoyland were appointed in 1841 under the terms of the enclosure act of 1830.

The 1930 Land Drainage Act set up an an overall authority responsible for the main rivers in each of the catchment areas, who would work closely with Drainage Authorities, who would be responsible for the internal drainage of smaller areas within a catchment. The funding for the drainage work could now be levied over a much wider area than had previously been the case.  Since the Statute of Sewers of 1531, it had only been possible to collect drainage rates from people whose land benefitted directly from the drainage works.  The new Catchment Boards could now levy rates throughout the entire catchment, not just on the low-lying parts of it, and could also levy rates on the Internal Drainage Boards within their area.  However, the 1930s were a time of economic uncertainty, and the Somerset Catchment Board was able to improve regular maintenance of the main rivers in the Somerset Levels, but would have needed to raise between £5 and £6 per acre to fund improvements. In a time of agricultural depression and falling prices, such rates were unrealistic.

The Land Drainage Act (1930) led to the creation of the Somerset Rivers Catchment Board which took over the powers of both the Somerset Drainage Commissioners and the remaining Somerset Commissioners of Sewers.  Three new internal drainage boards were created, viz. Gordano Valley, North Somerset and West Mendip.  In 1946 a board was set up for the Dunster district.

In charge of the rivers and sewers were:

Following on from the above, here are some monthly Rainfall reports sent in to the Somerset River Board, later the River Authority - not very exciting philatelically but demonstrating how things were measured in the 1960s and 1970s. 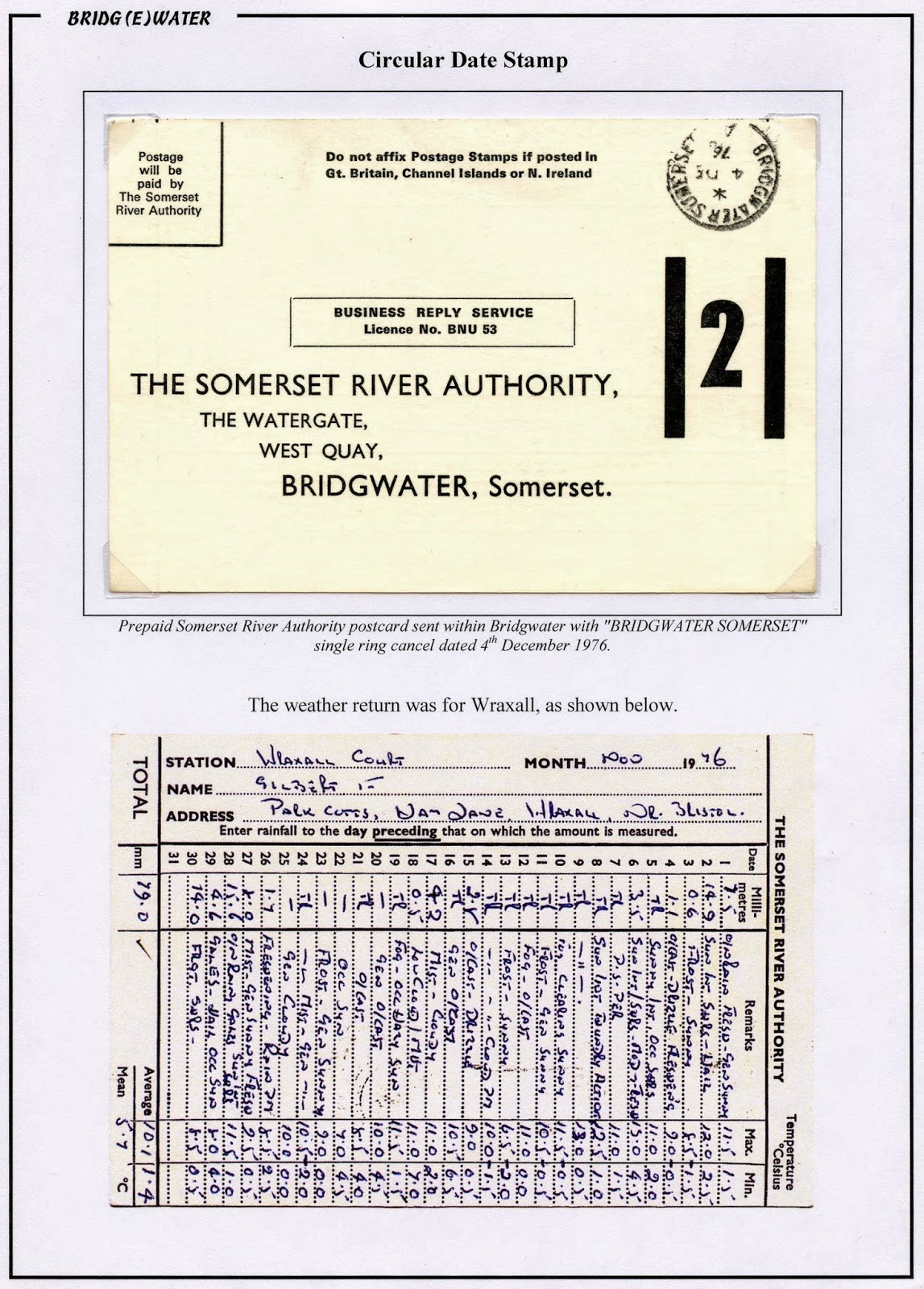 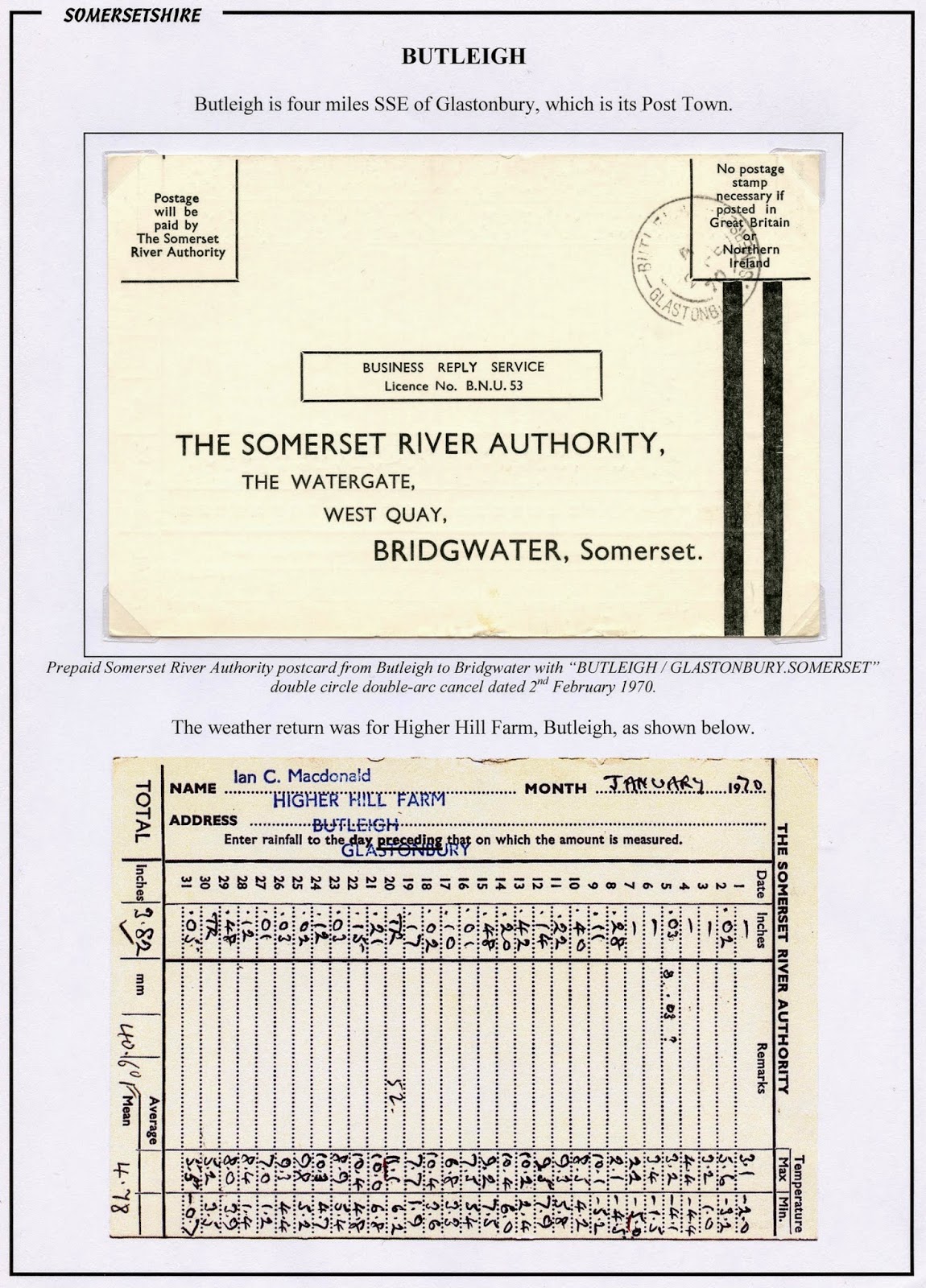 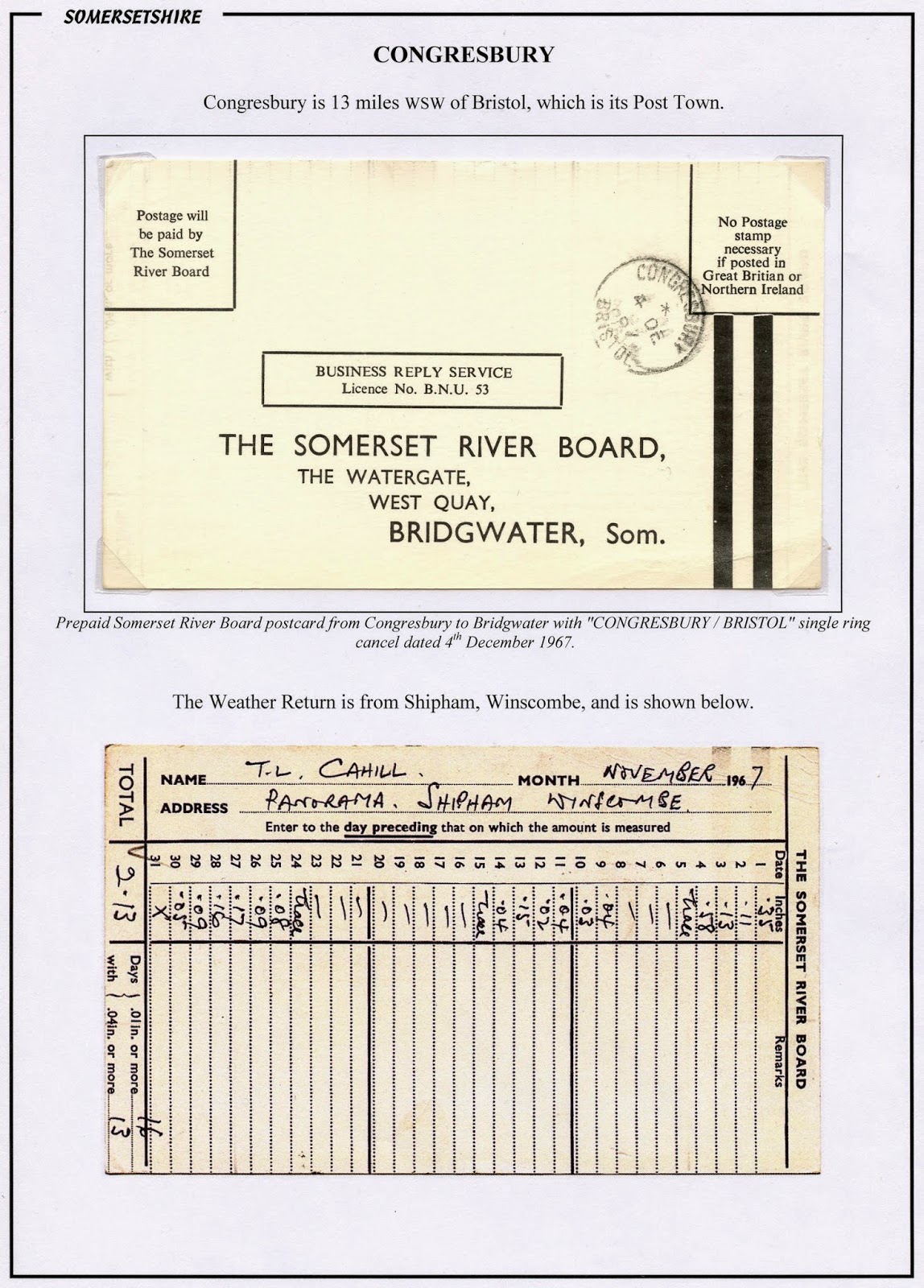 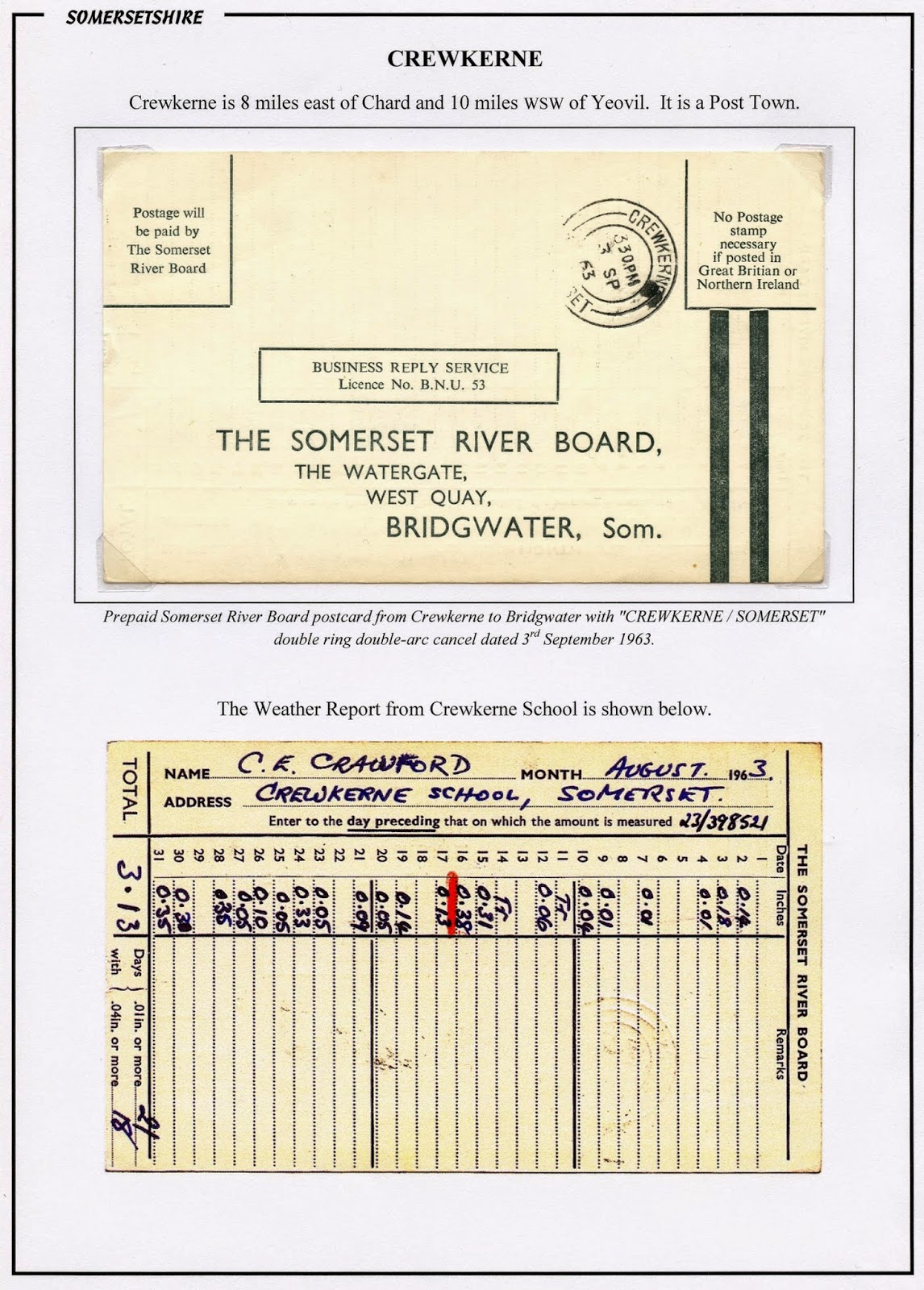 Email ThisBlogThis!Share to TwitterShare to FacebookShare to Pinterest
Labels: River Authority, River Board 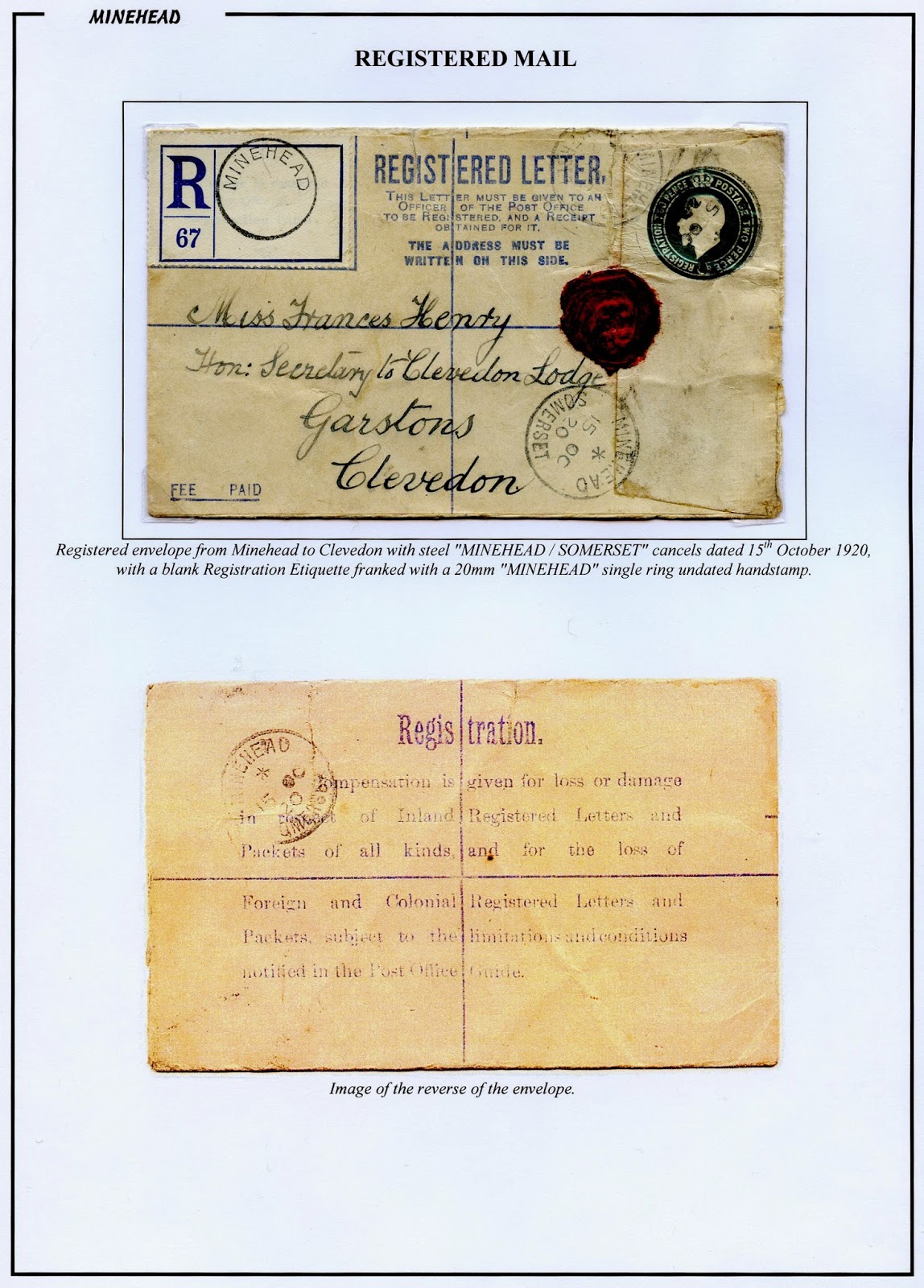 On consulting with more knowledgeable members of the S&DPHG the answer is No.  The undated 20mm circular handstamp is likely to be an ordinary circular datestamp with the date slugs temporarily removed, being used to identify the Registration Label at a time when the Minehead office did not have a named Registration Label.

Below is another Dunster entire with a black "DUNSTER" undated circular handstamp with a manuscript date (3rd August 1846) written in the centre.  By 1846 mail from Dunster was certainly not going via Taunton to be datestamped, so it appears that the Dunster office improvised this way of getting the despatch date on the mail. 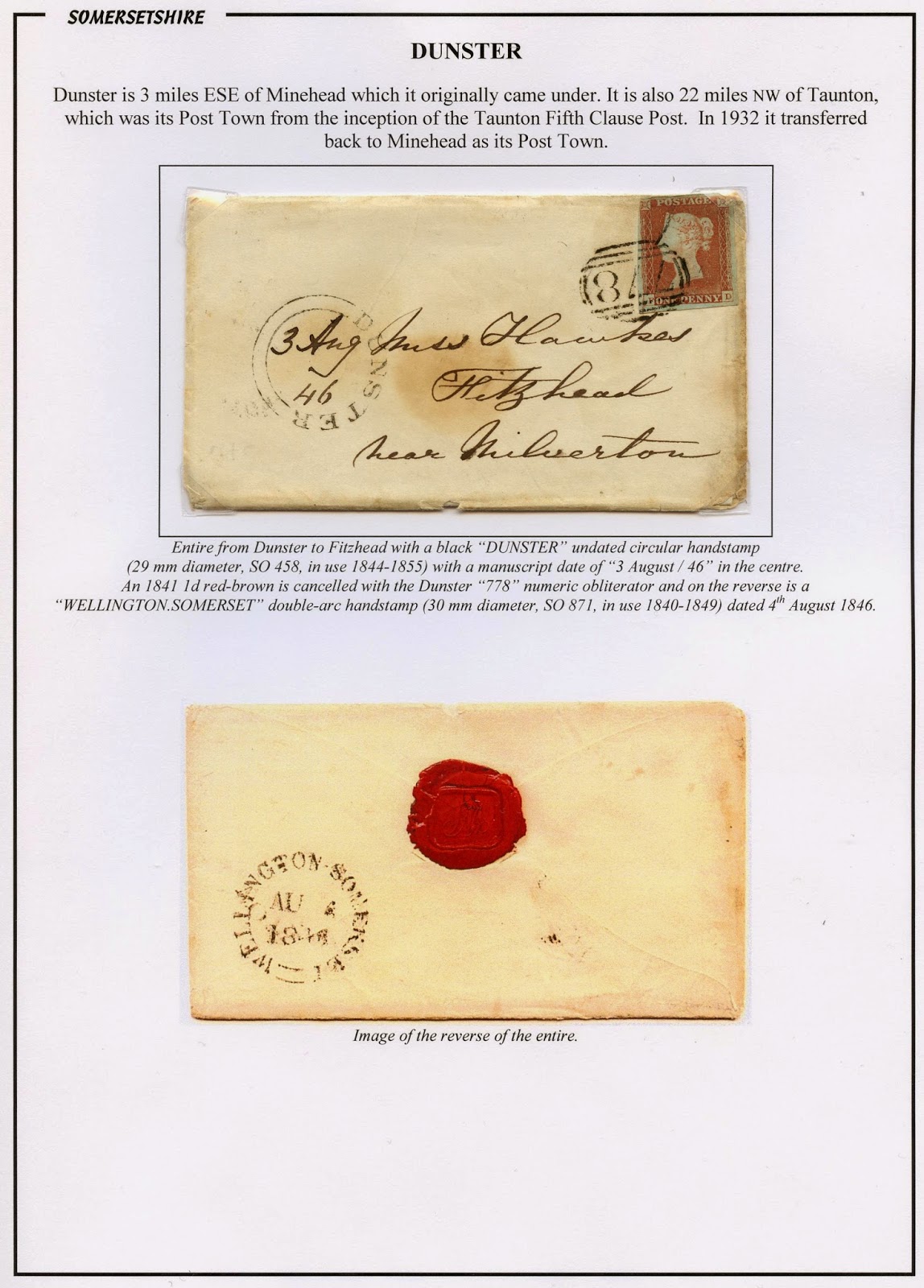 Round and about Bristol - Clifton, Fishponds, Kingswood, Staple Hill and the Gorge

More postmarks with a Bristol theme, this time from round and about Bristol - starting with Clifton and a "CLIFTON / BRISTOL" circular date stamp from September 1906. 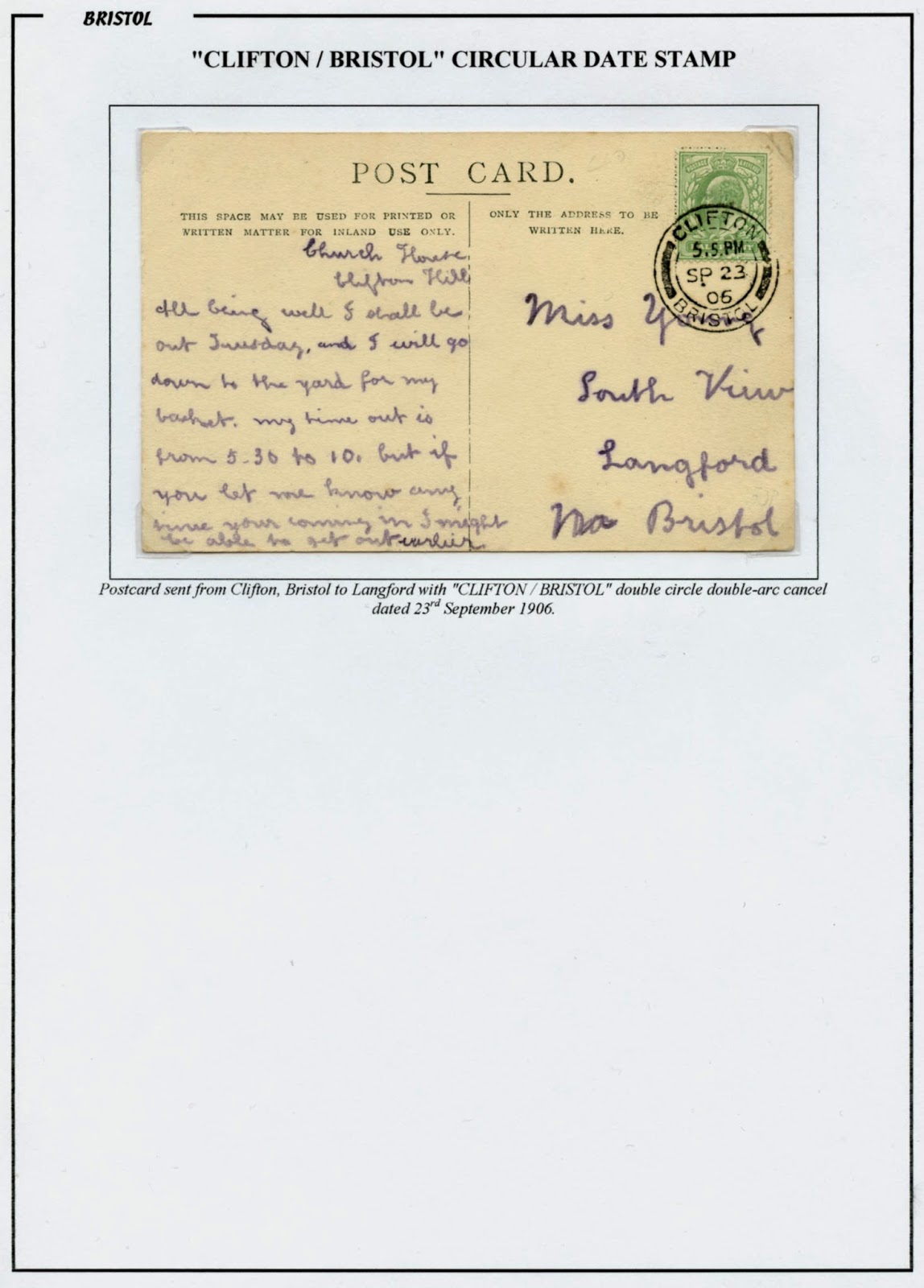 Then from February 1907 a "FISHPONDS" circular date stamp. 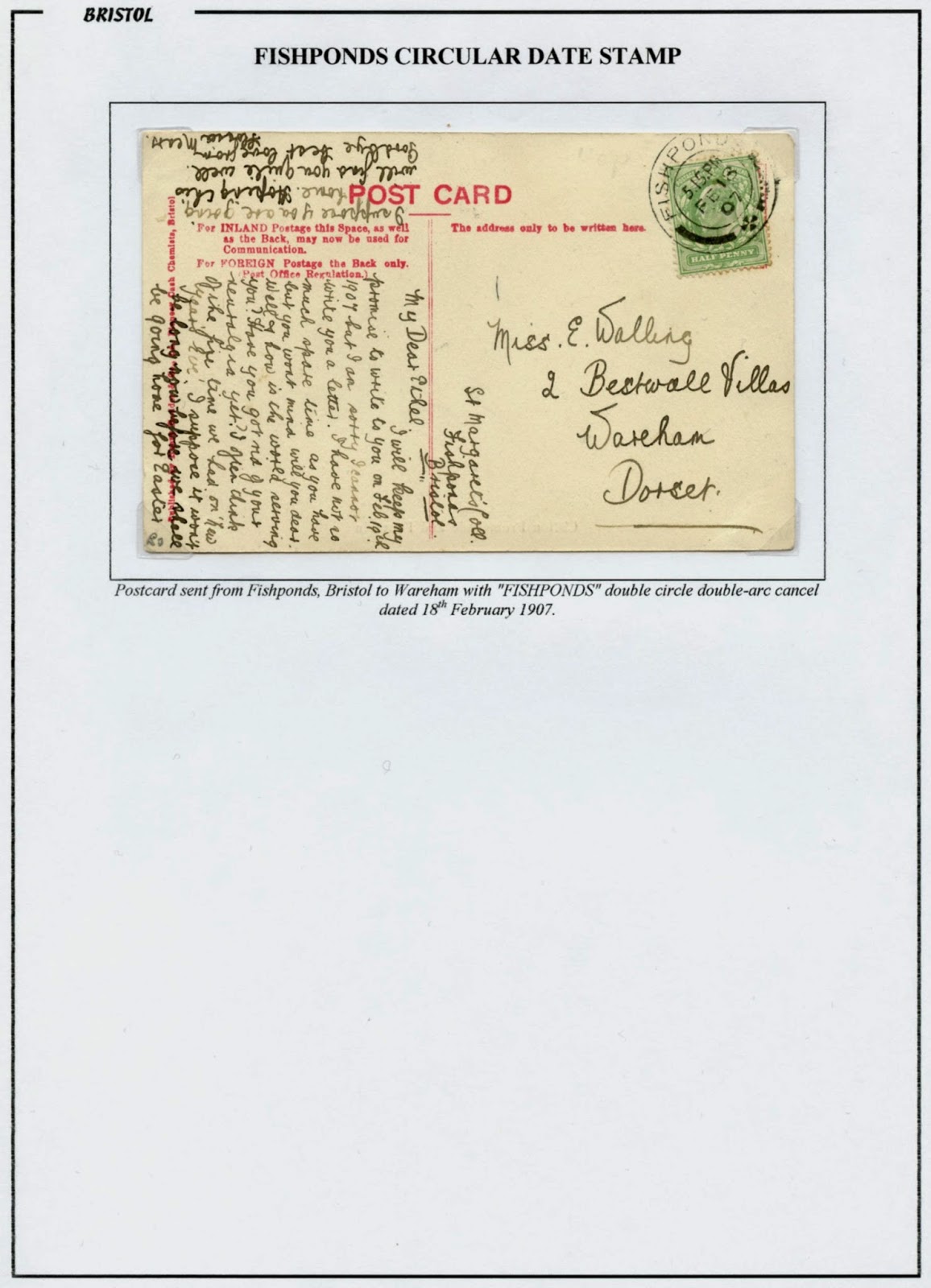 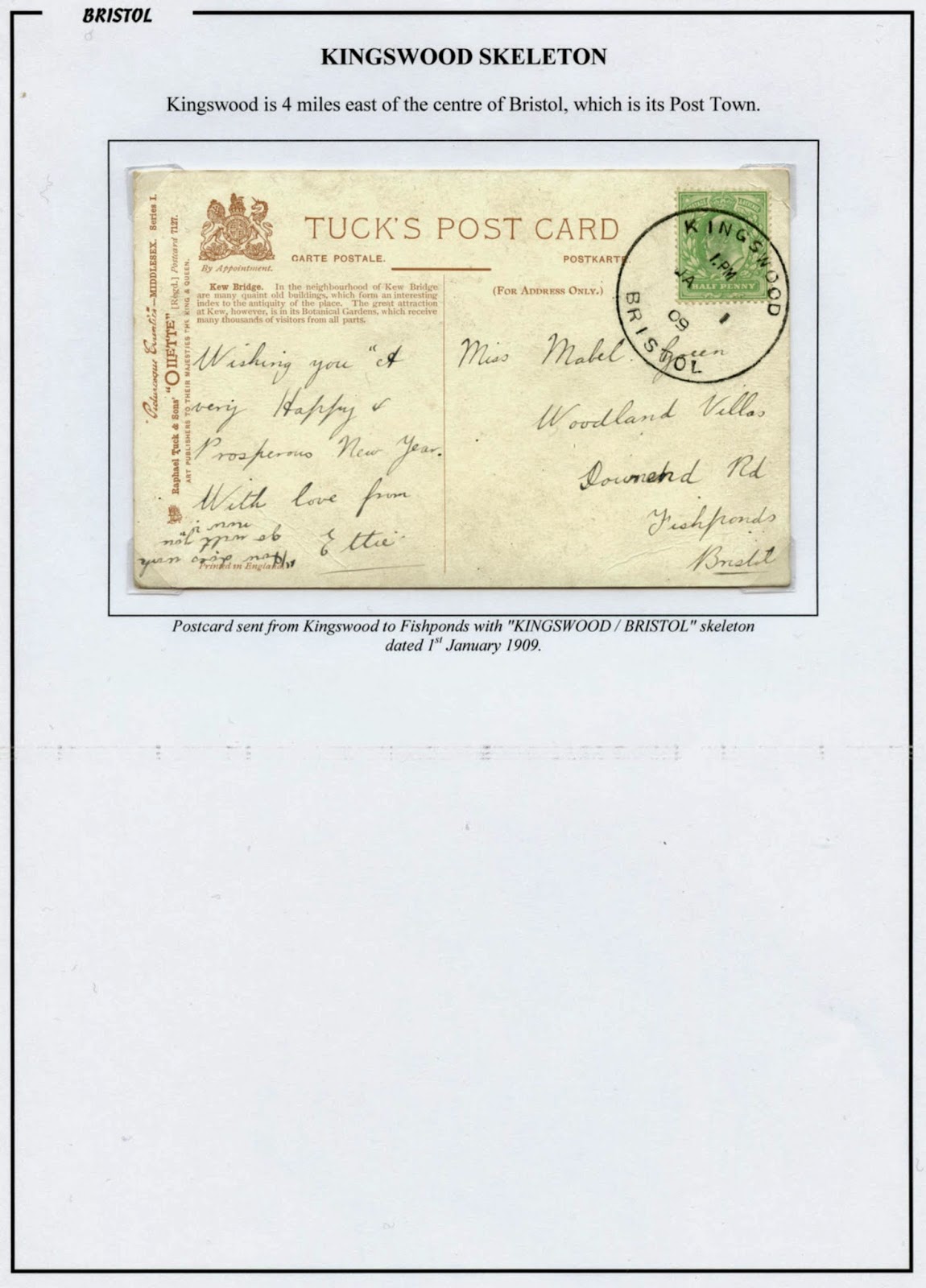 And from February 1915 a "STAPLE-HILL / BRISTOL" circular date stamp. 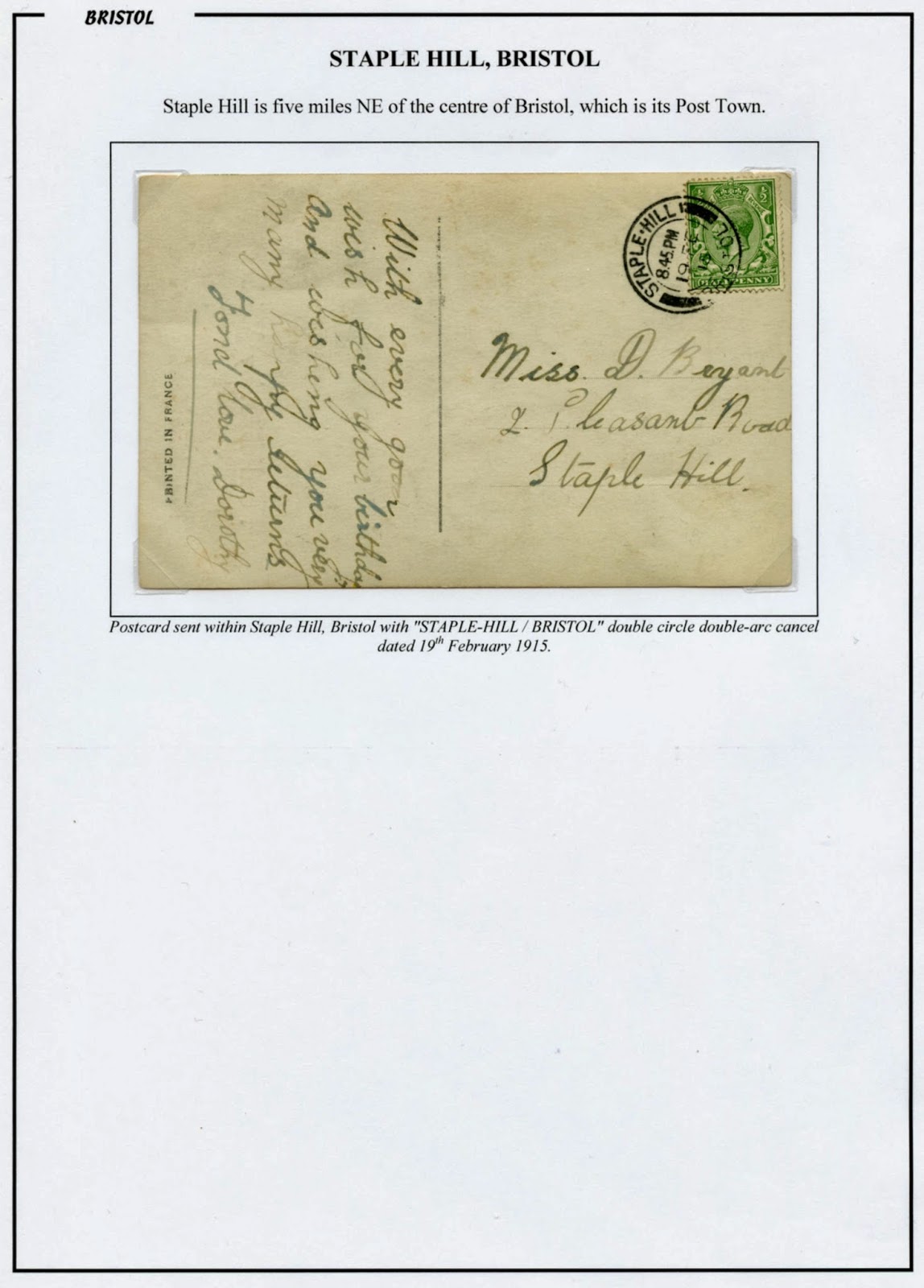 Finally to finish off, some photographic postcards depicting views of the Gorge. 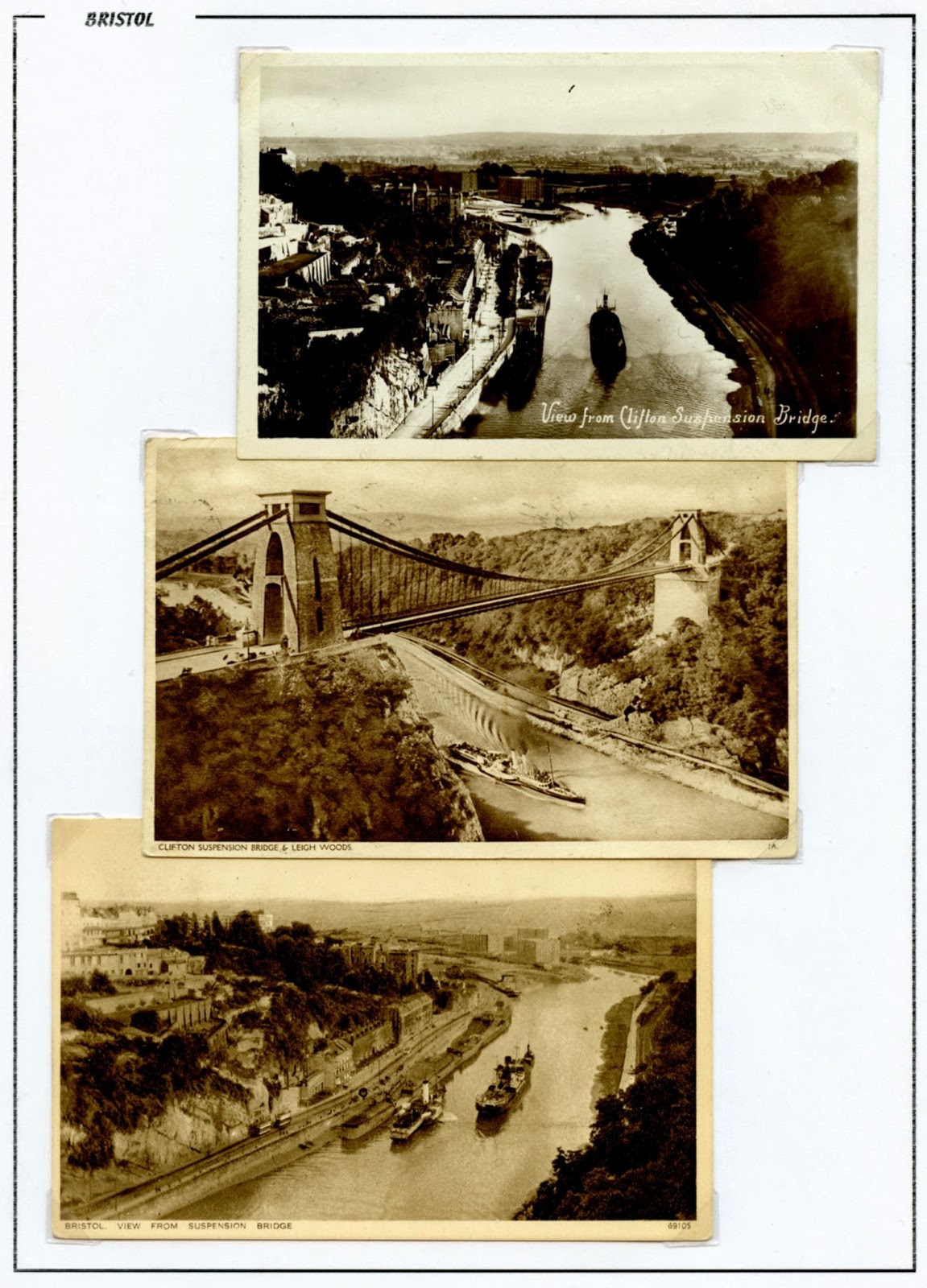 Email ThisBlogThis!Share to TwitterShare to FacebookShare to Pinterest
Labels: Bristol, Clifton (B), Fishponds (B), Kingswood (B), Staple Hill (B)

More recent acquistitions, this time from Bristol, starting with a "BRISTOL" squared circle cancel with "6" in the bottom corners from April 1905. 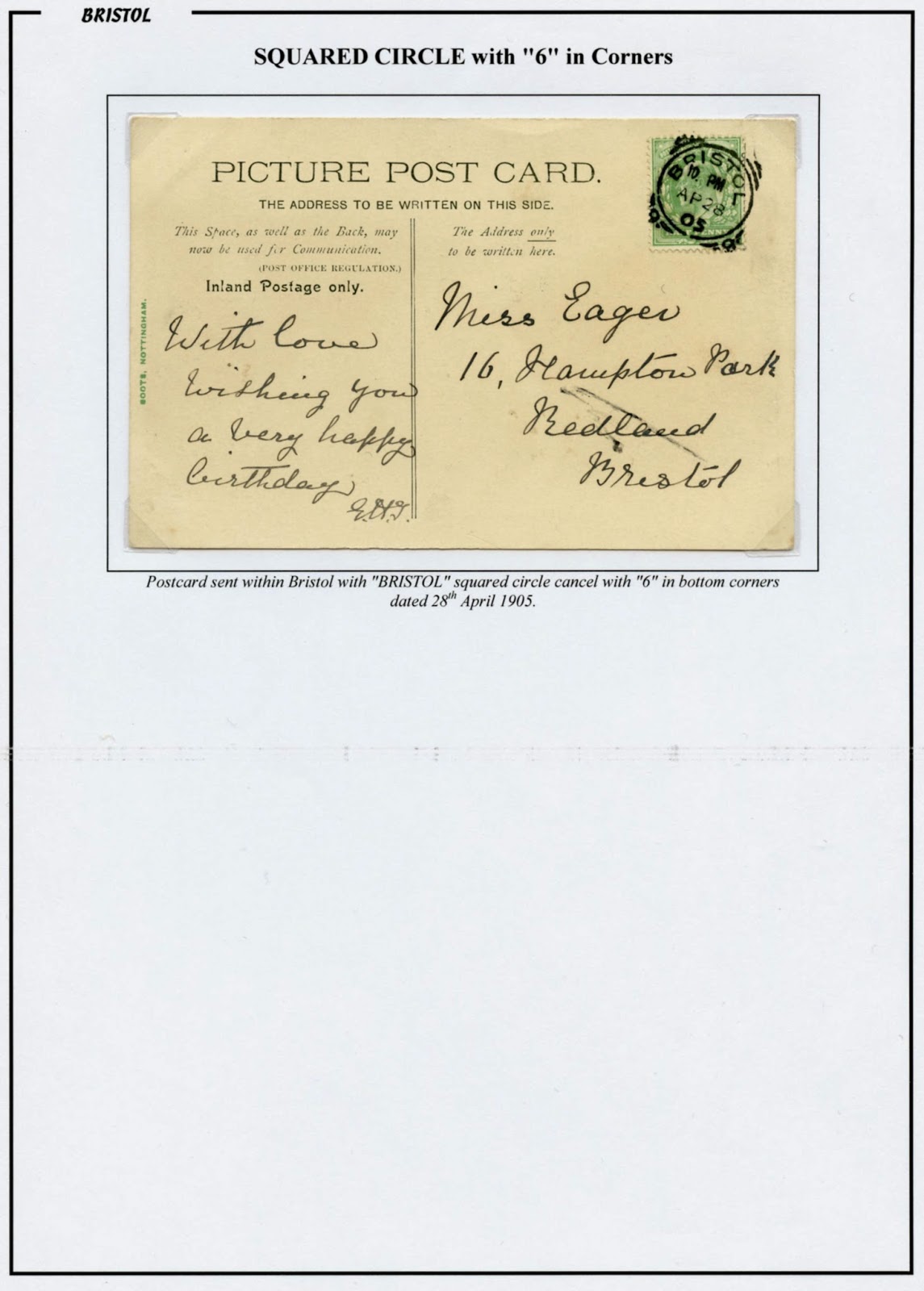 Then a circular date stamp with "37" in the bottom arc from November 1909. 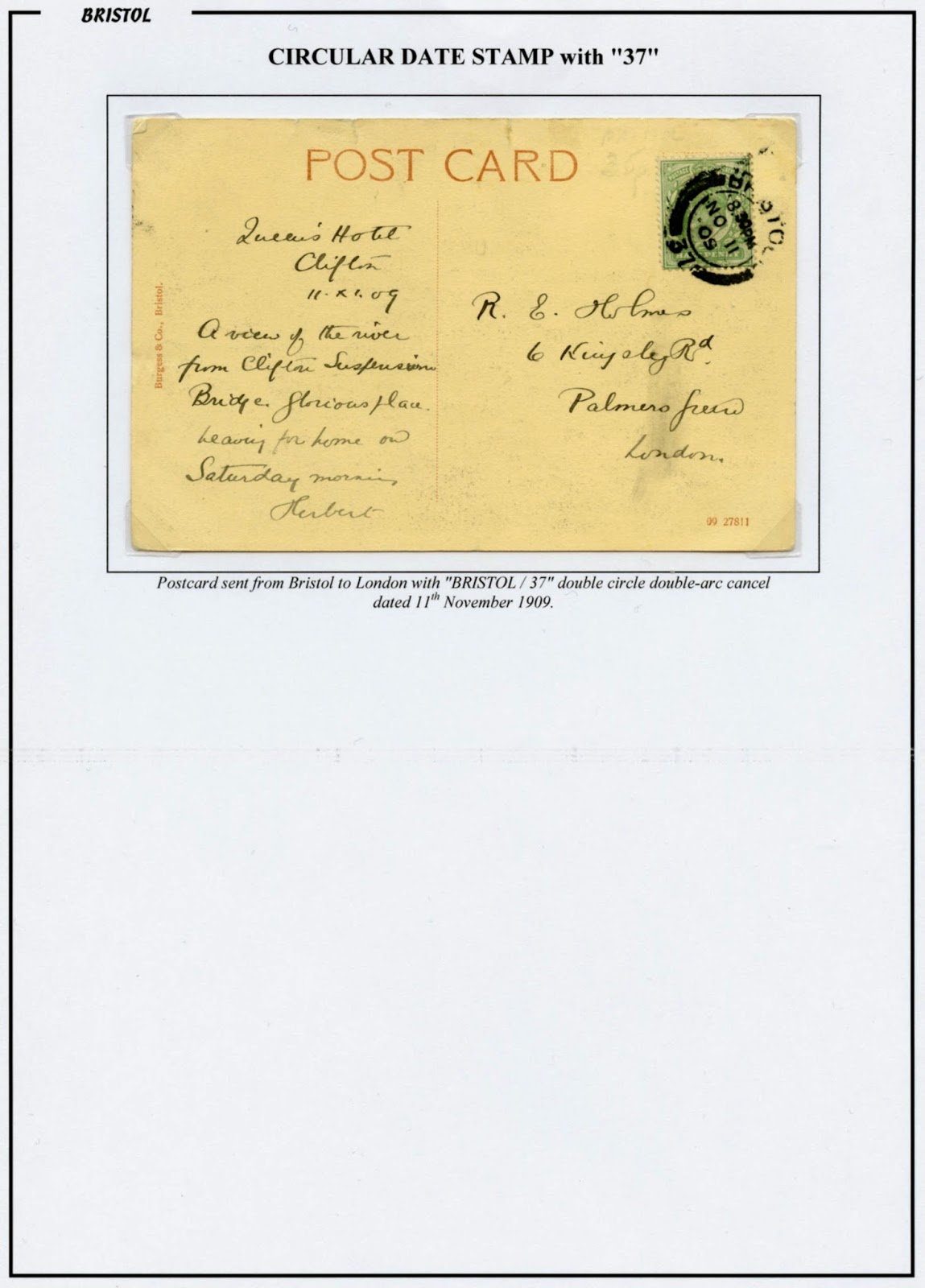 Ending up with a Registered Letter envelope with "142 WHITELADIES ROAD BRISTOL.8" circular cancels from January 1967. 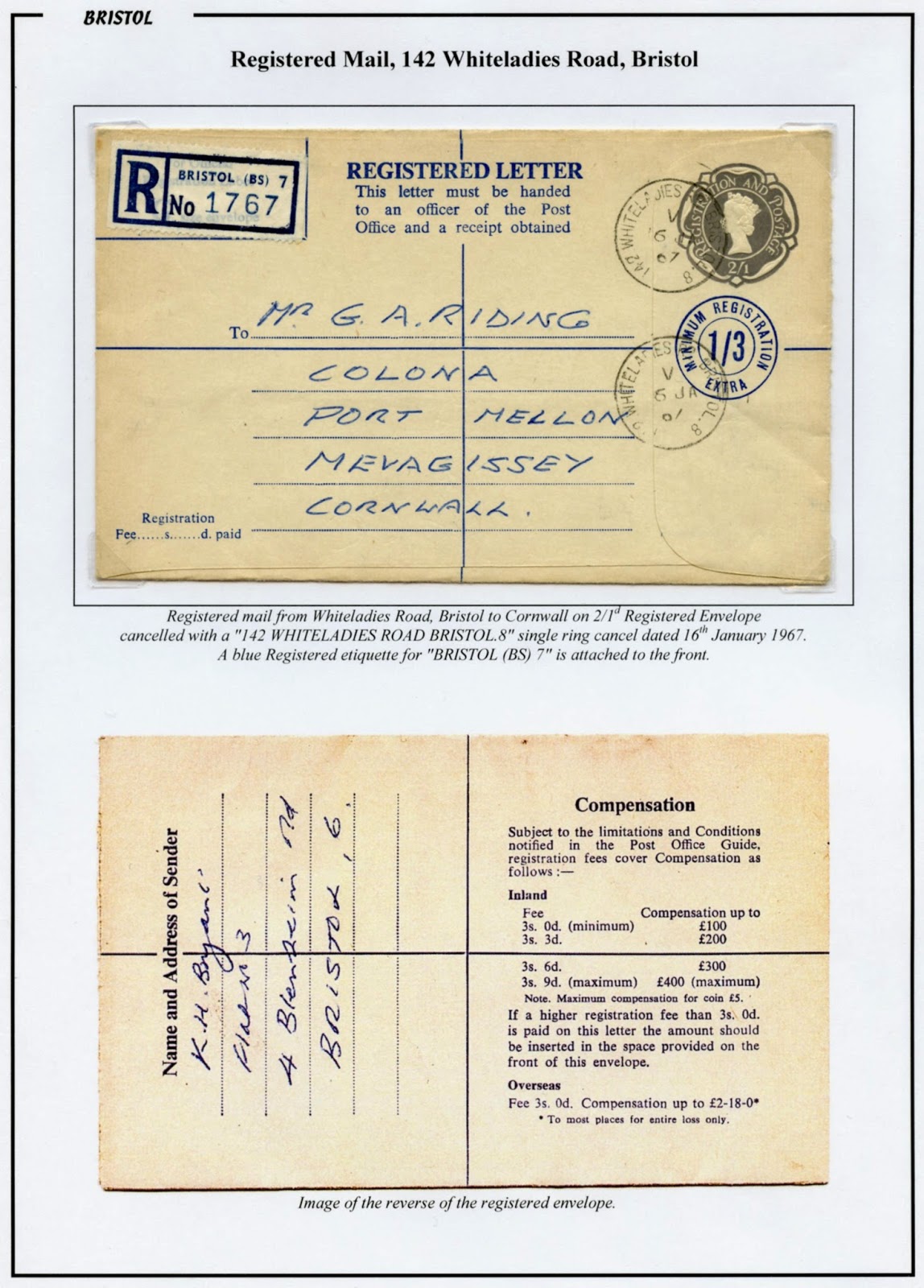 The final batch of this random walk through Somerset, starting with some modern Taunton town sub-office (TSO) self-inking datestamps from North Street and Station Road from October 2013. 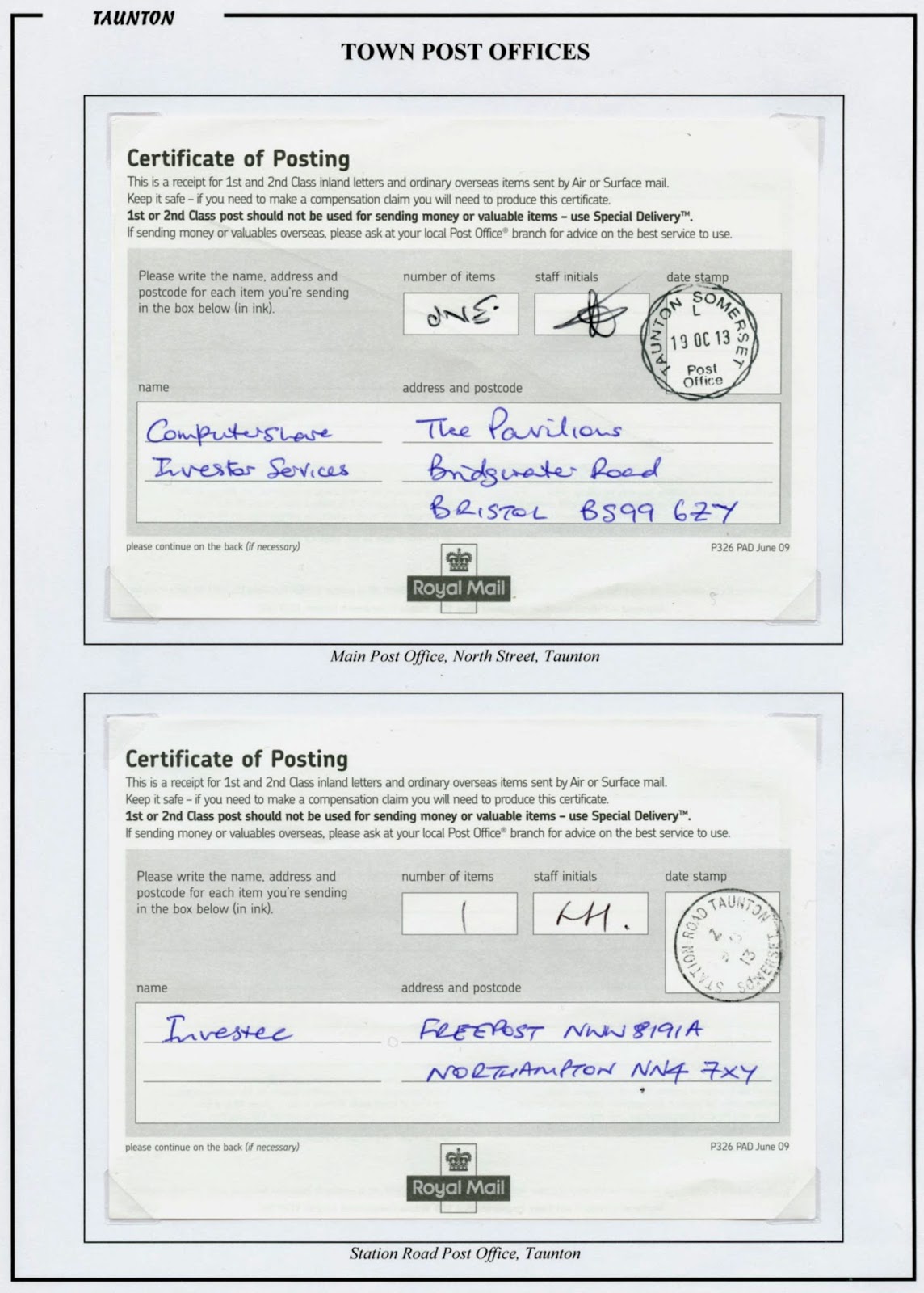 Next we go to West Harptree for a rather patchy "WEST HARPTREE / BRISTOL" steel cancel from August 1907. 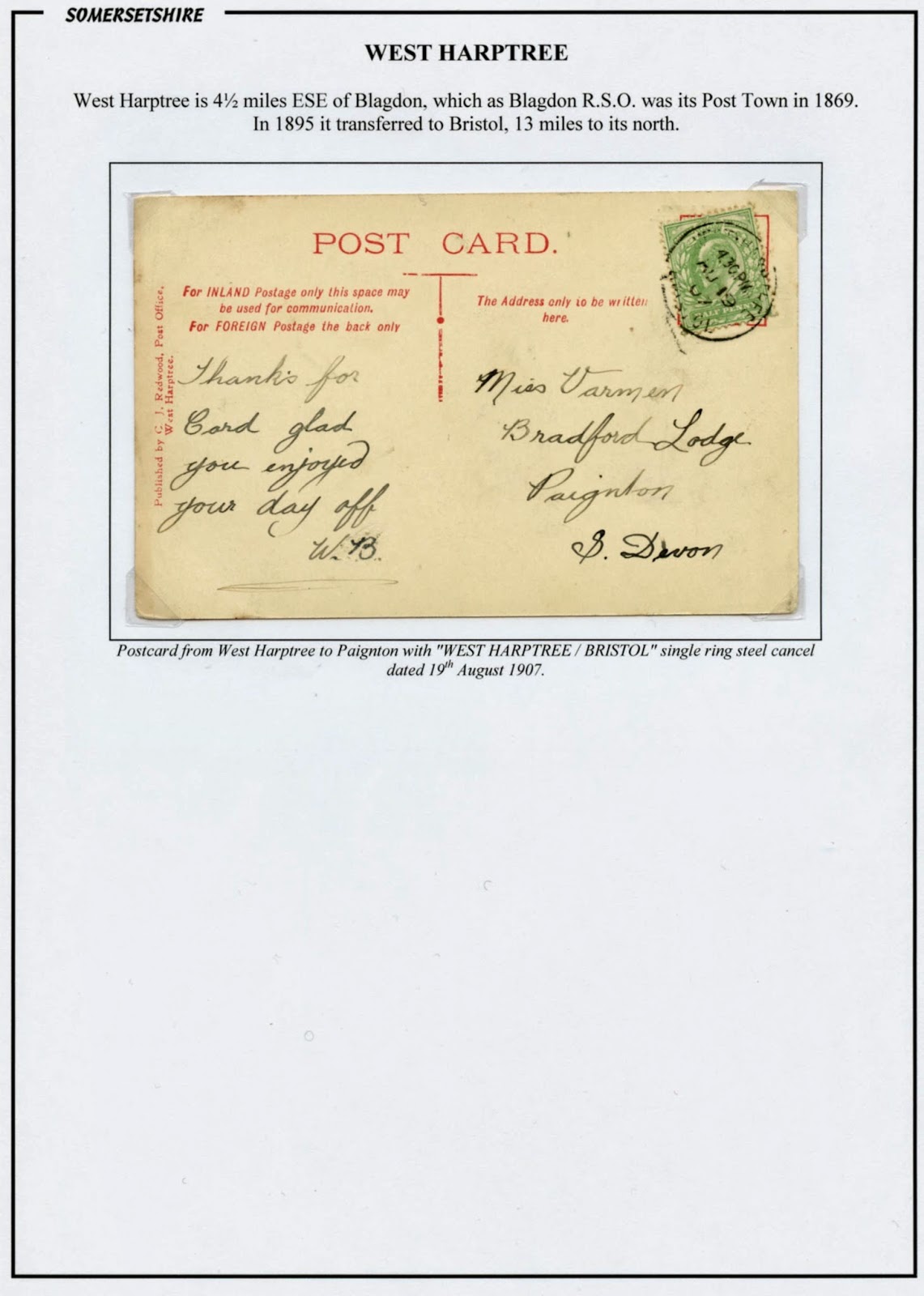 Then to Winsford near the border with Devon, with a registered letter bearing steel "WINSFORD / SOM" single ring cancels dated September 1921. 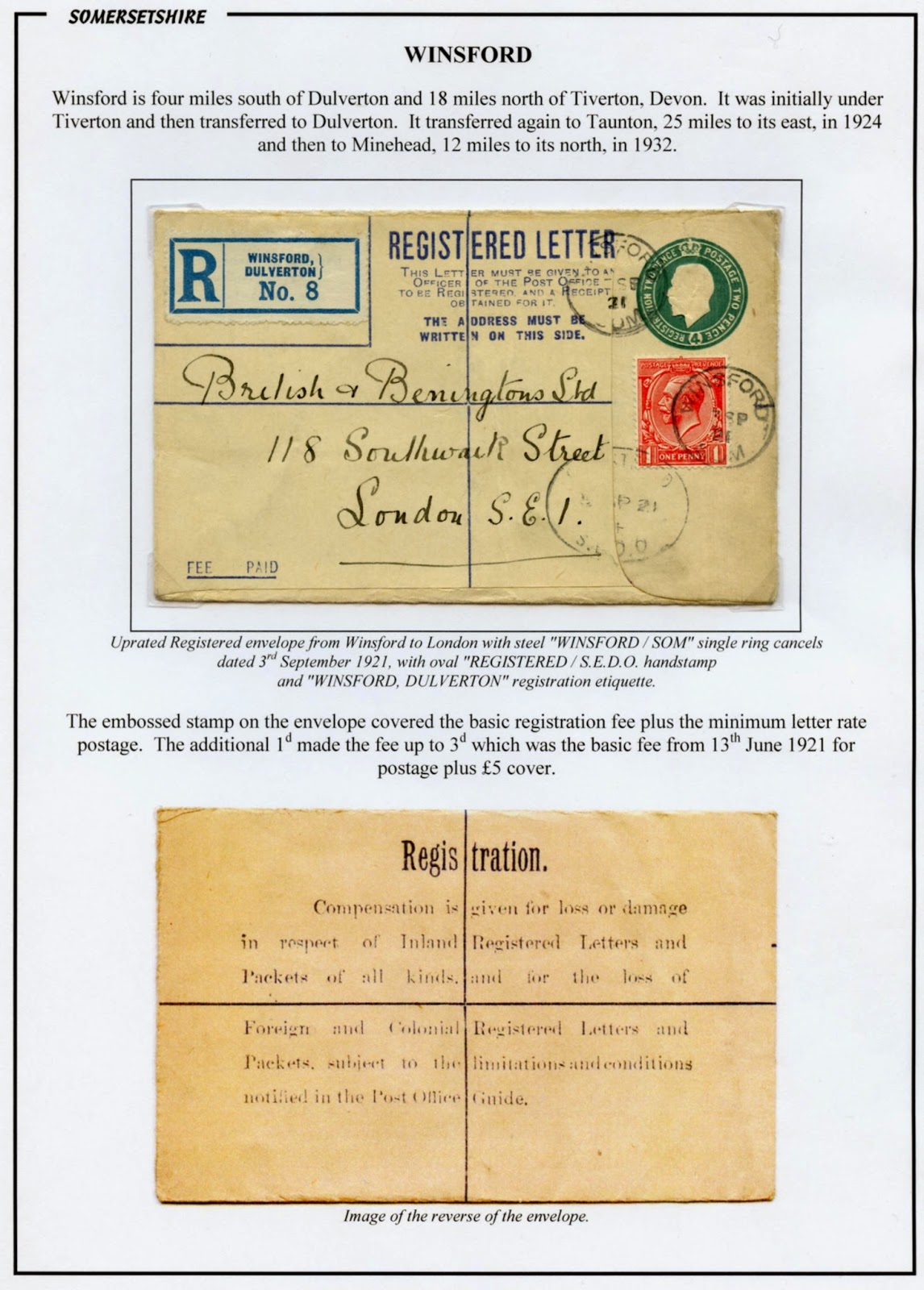 And we end up with a postcard from Yatton, near Bristol with a "YATTON" double ring double-arc cancel dated January 1904 (and a private violet receiving mark from the Junior Constitutional Club in London).  The postcard has a nice view of Yatton church. 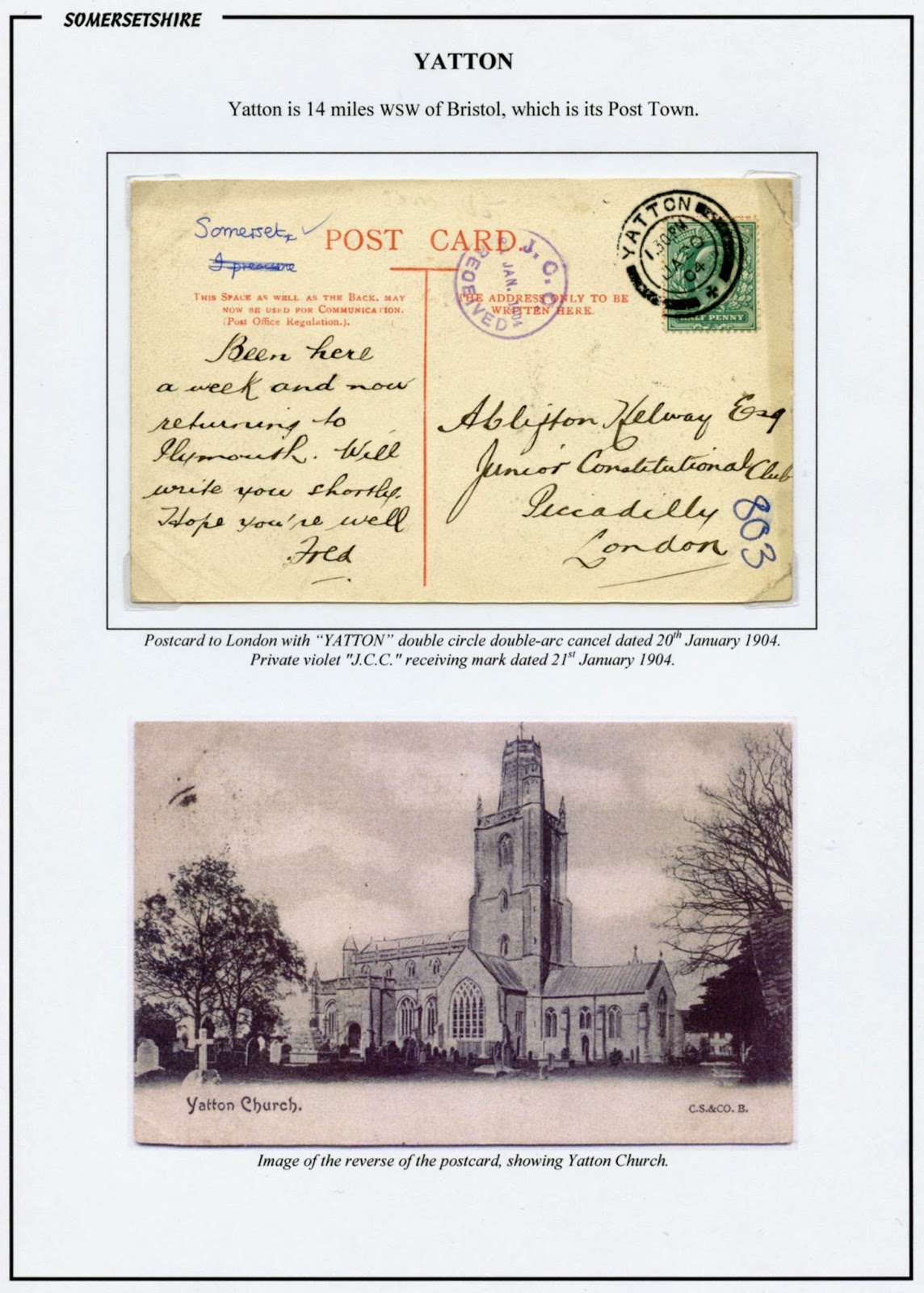