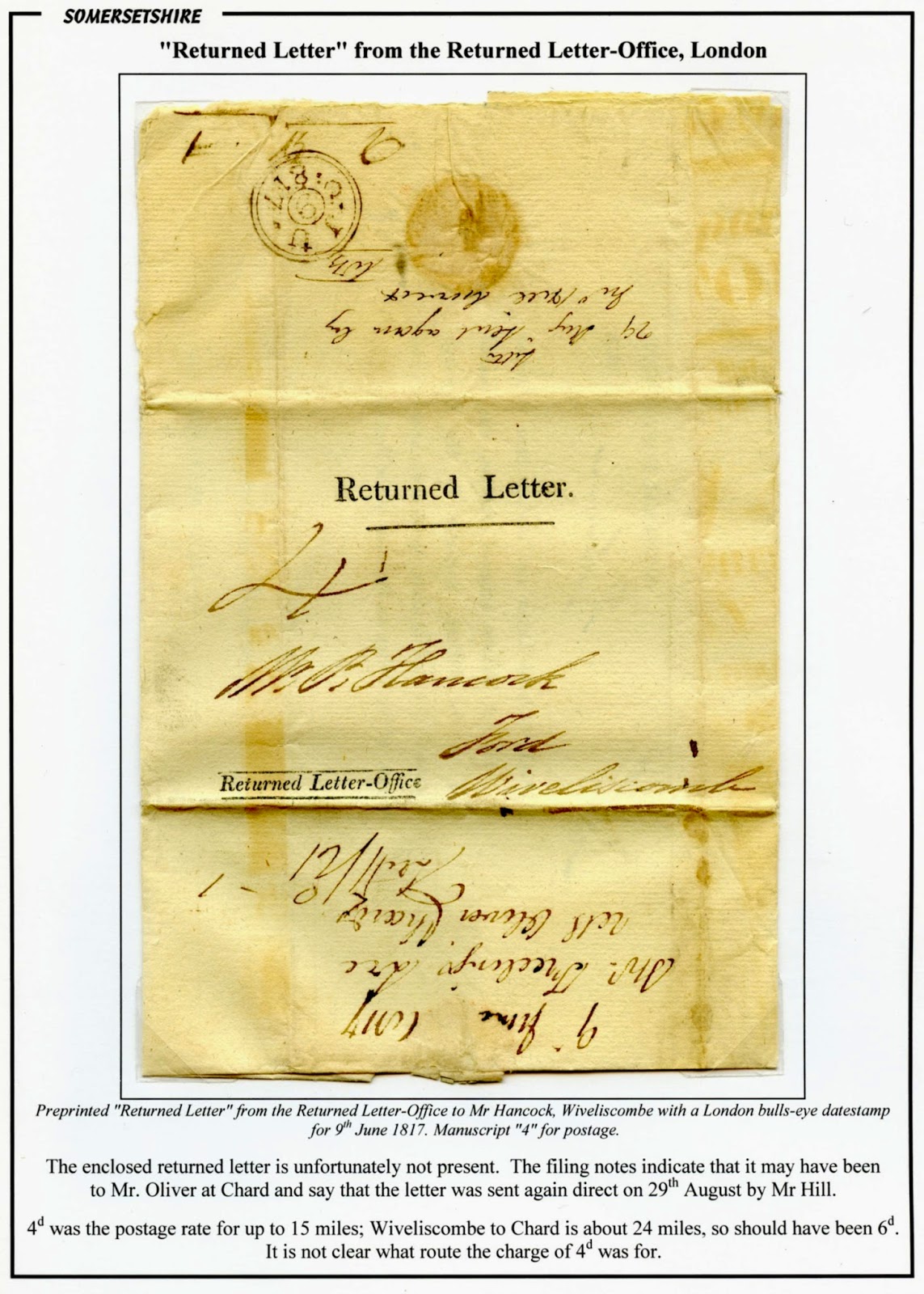 Here is a scan of the contents of the Returned Letter form. 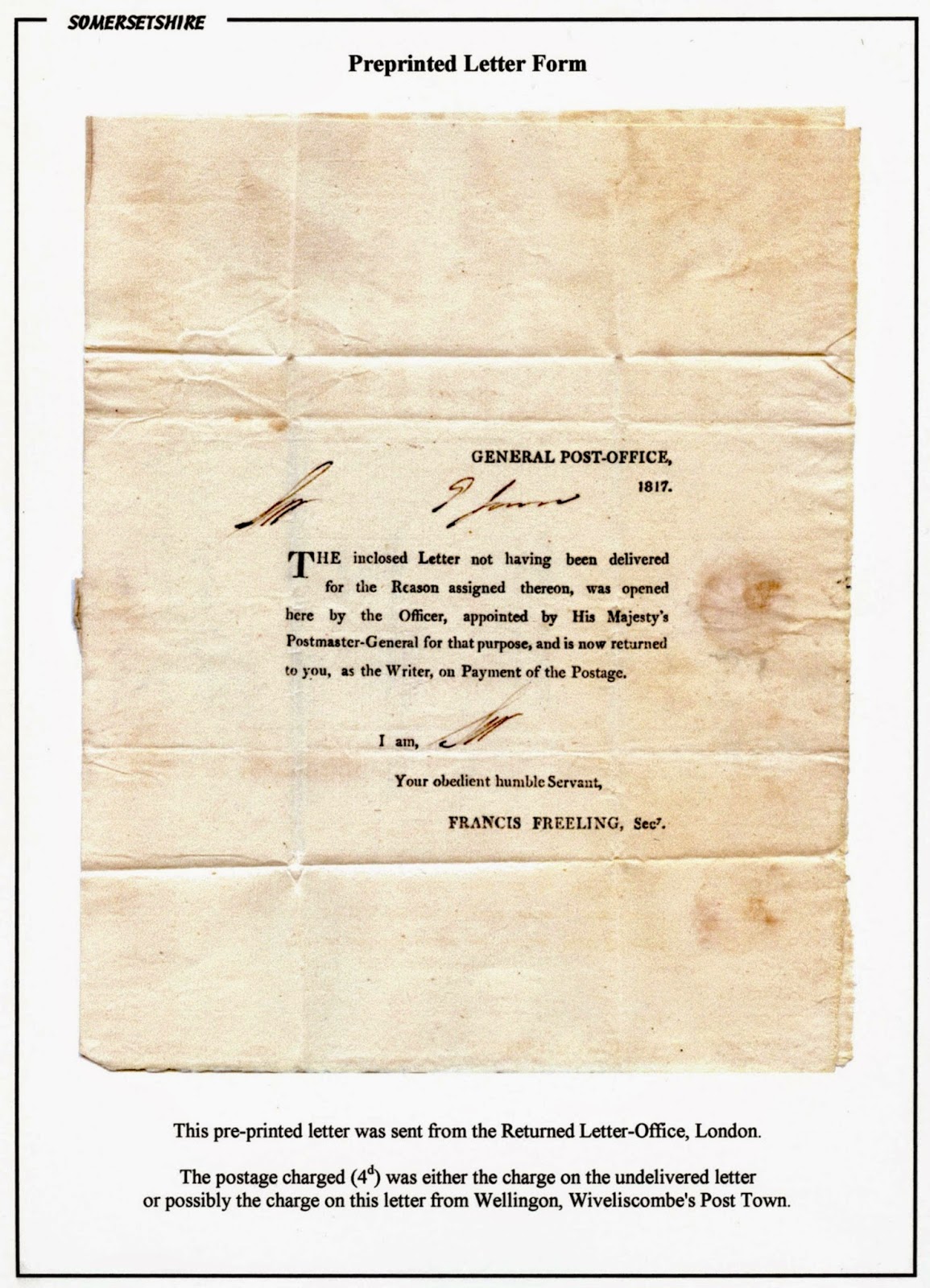 It is not clear to me why this Returned Letter was charged 4d.

The filing notes on this preprinted form may indicate that the undeliverable letter was originally to a Mr Oliver at Chard.  Wiveliscombe to Chard is about 25 miles, so would have been 6d in the General Post (for 20-30 miles).

Is it possible that the charge of 4d represents the postage from Wellington, Wiveliscombe's Post Town, back to Wiveliscombe ?  This is about 8 miles (via Milverton) so would have been 4d in the General Post (for up to 15 miles).

In later years the handling of returned letters was performed at the Returned Letter Branch, Bath.  Post Towns were also issued with "Undeliverable for reason stated / Return to Sender" cachets.

The two entires below both have boxed "No.15" handstamps (Templecloud) and oval "OLD-DOWN" handstamps.  The first, from August 1829, goes from Templcloud south to Old Down where it was put on the Bath to Exeter coach down to Exeter. 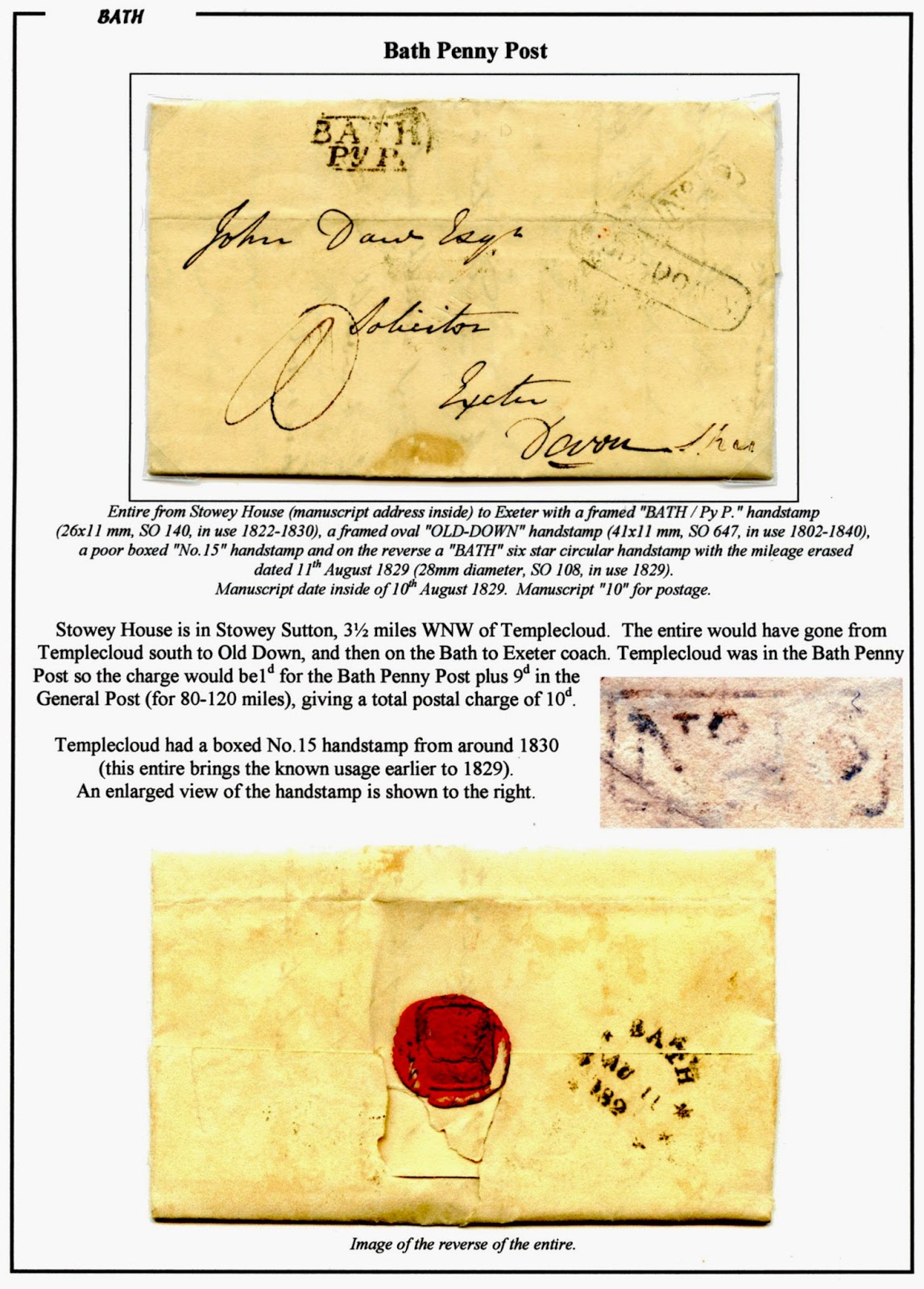 The second, from 1836, goes south from Templecloud to Old Down and then on the Exeter to Bath coach, from where it goes to London. 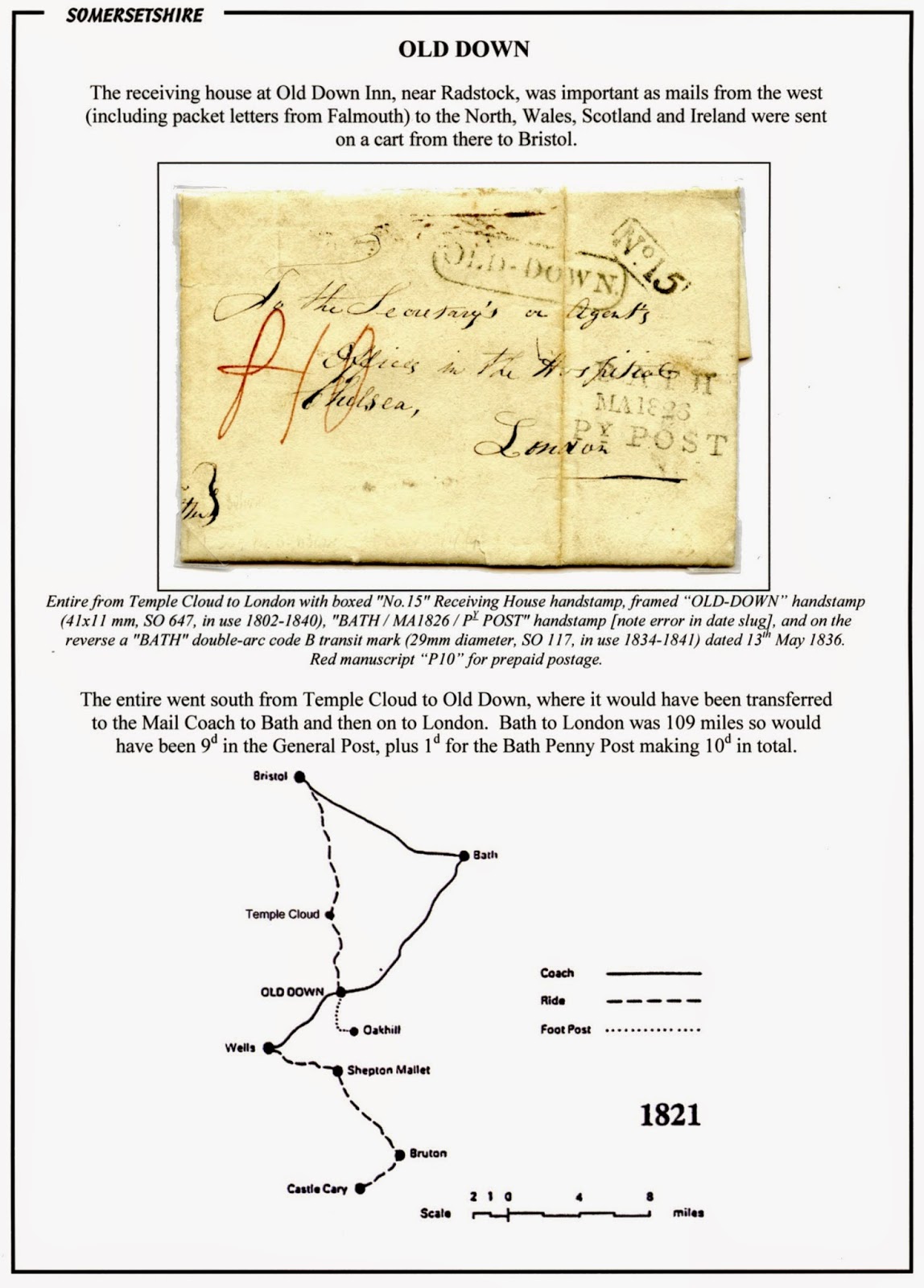 Christmas Greetings - here is a fairly unusual postcard with good wishes to Taunton from East Grinstead in 1907.  The card has a nice TPO mark from Great Eastern  - as a result of missorting ? 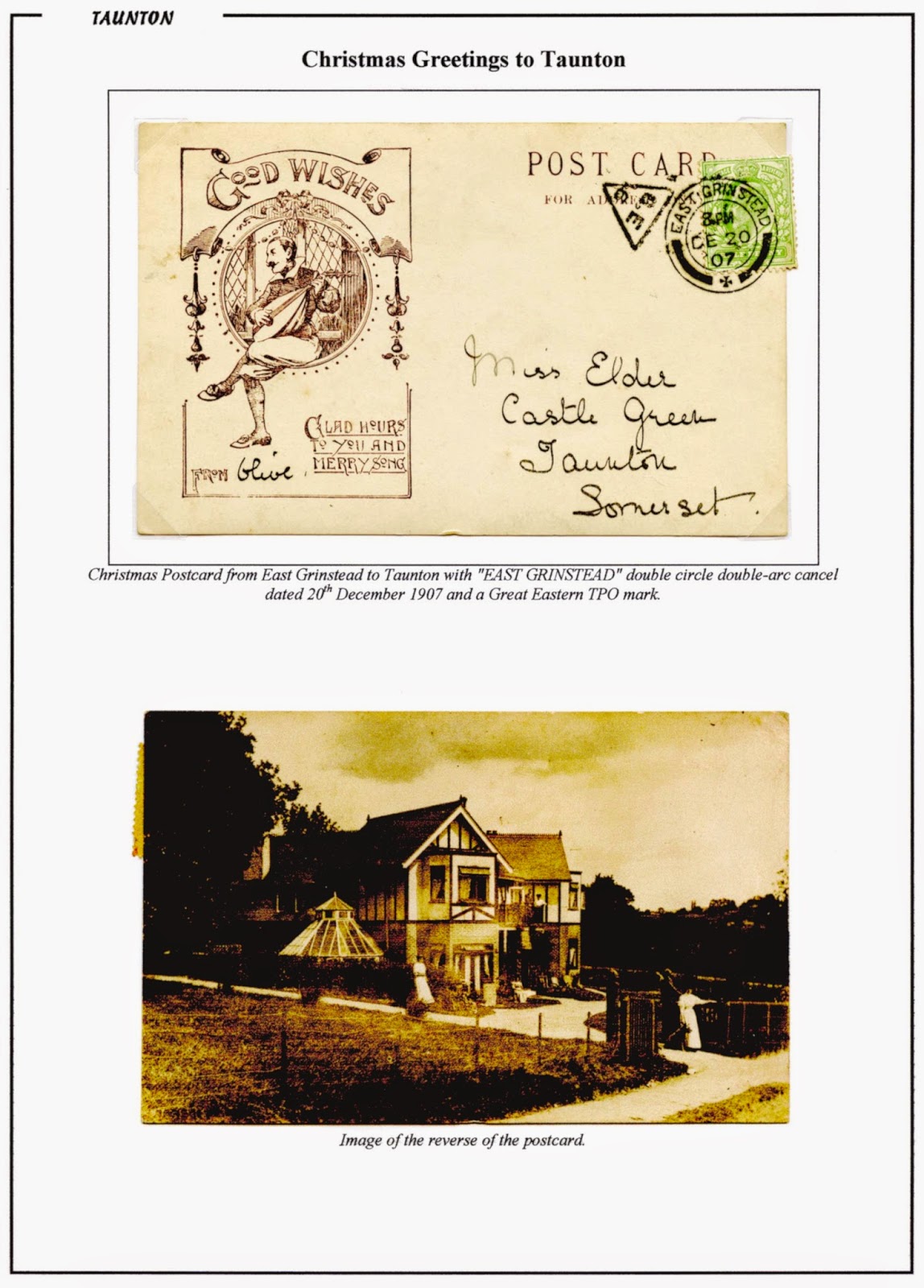 Perhaps the lady depicted in the postcard is the proud owner of what looks like a newly built house ?
Posted by Leamphil at 08:00 No comments:

Email ThisBlogThis!Share to TwitterShare to FacebookShare to Pinterest
Labels: xmas

The part-entire below was originally from Taunton to Farringdon, and then redirected to the Isle of Wight.  It has a nice Taunton Maltese Cross on the 1841 1d red-brown, and then a manuscript charge of "1" for the redirection. 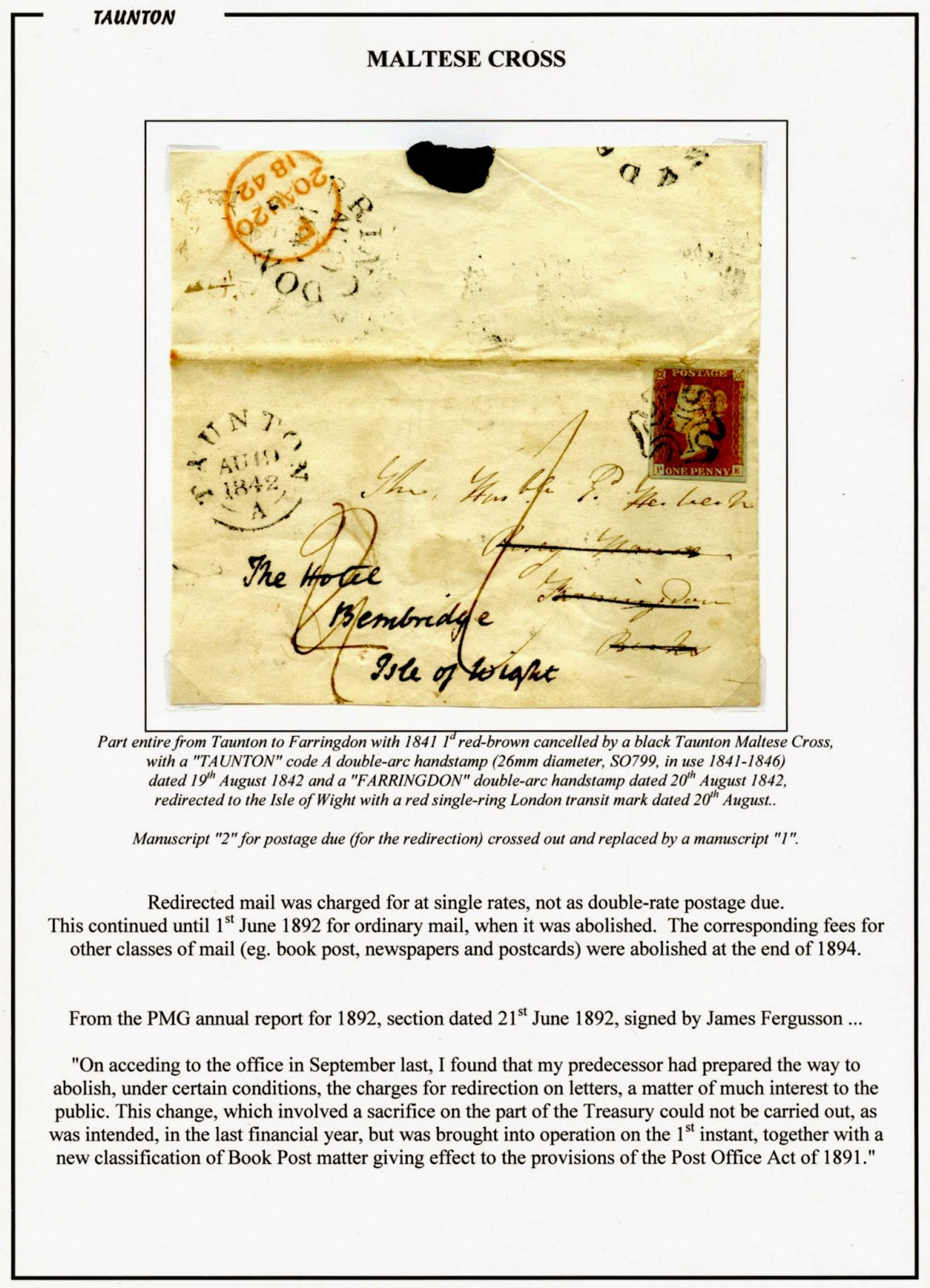 Redirection was charged at a single rate until 1st June 1892 when it was abolished.
Posted by Leamphil at 08:00 No comments:

Three items from Dunster, starting with a part entire with a framed "Dunster / Penny Post" handstamp (known in use 1830-1831).  The marked up postal charge of 7d does not include anything for a Penny Post and I don't know of any Receiving Houses (if you know please get in touch !). 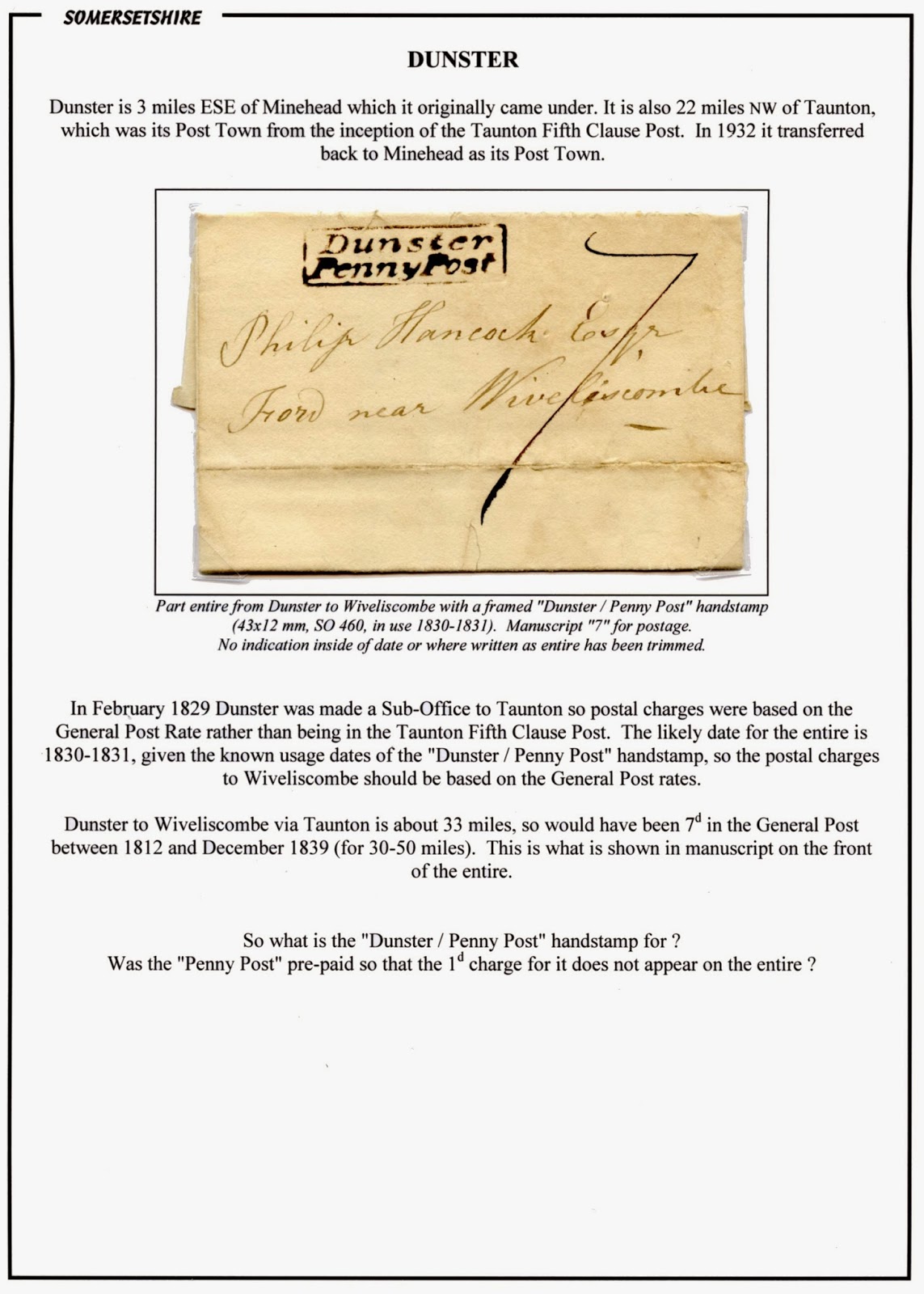 Next an item from 1843 with an 1841 1d red-brown with multiple Maltese Cross cancels.  The multiplicity of cancels makes it impossible to determine where the cancels came from. 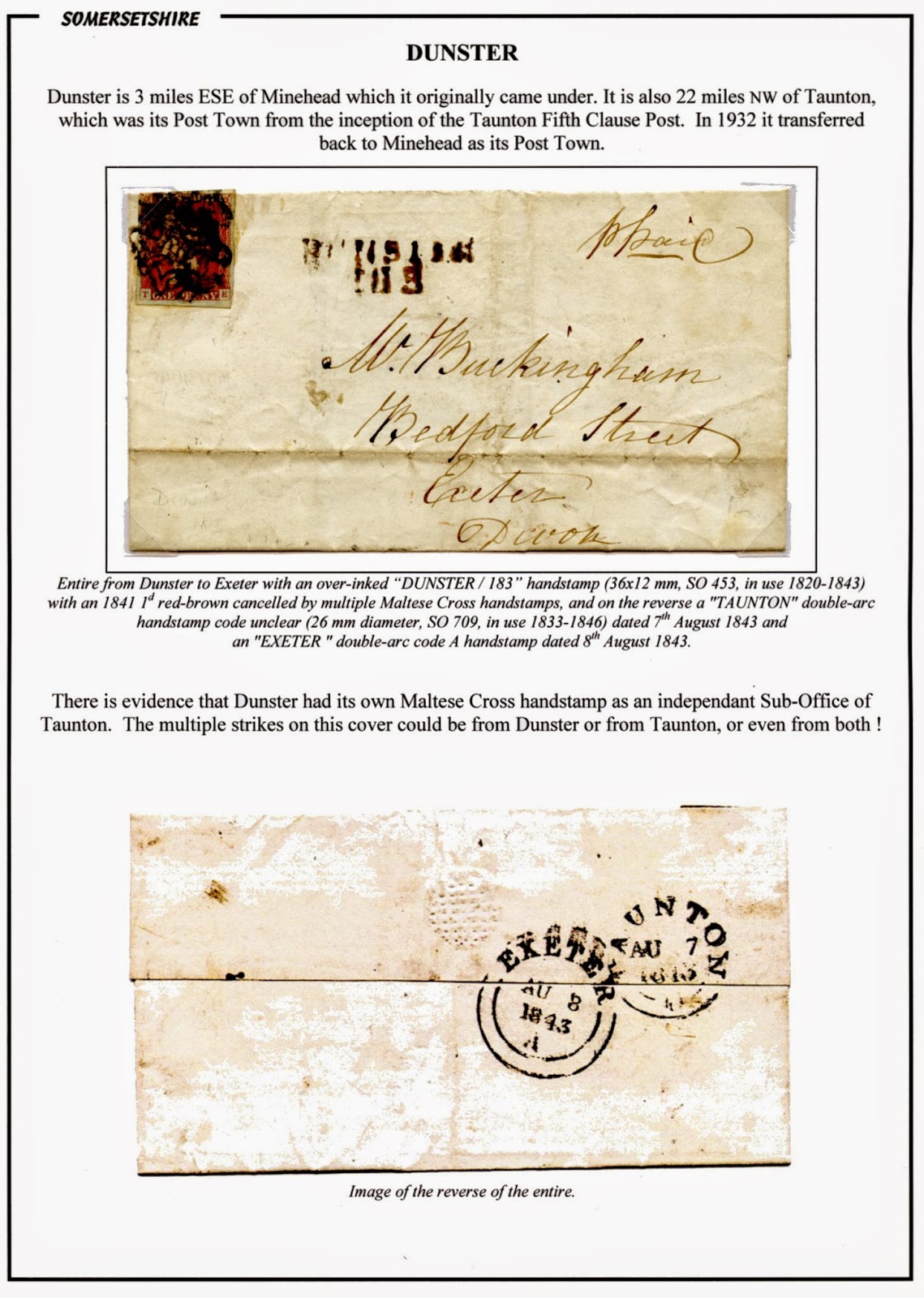 And finally an item from 1845 without any prepayment of postage so incurring 2d postage due.  The entire was to the Royal Hospital, Chelsea on behalf of an ailing military pensioner. 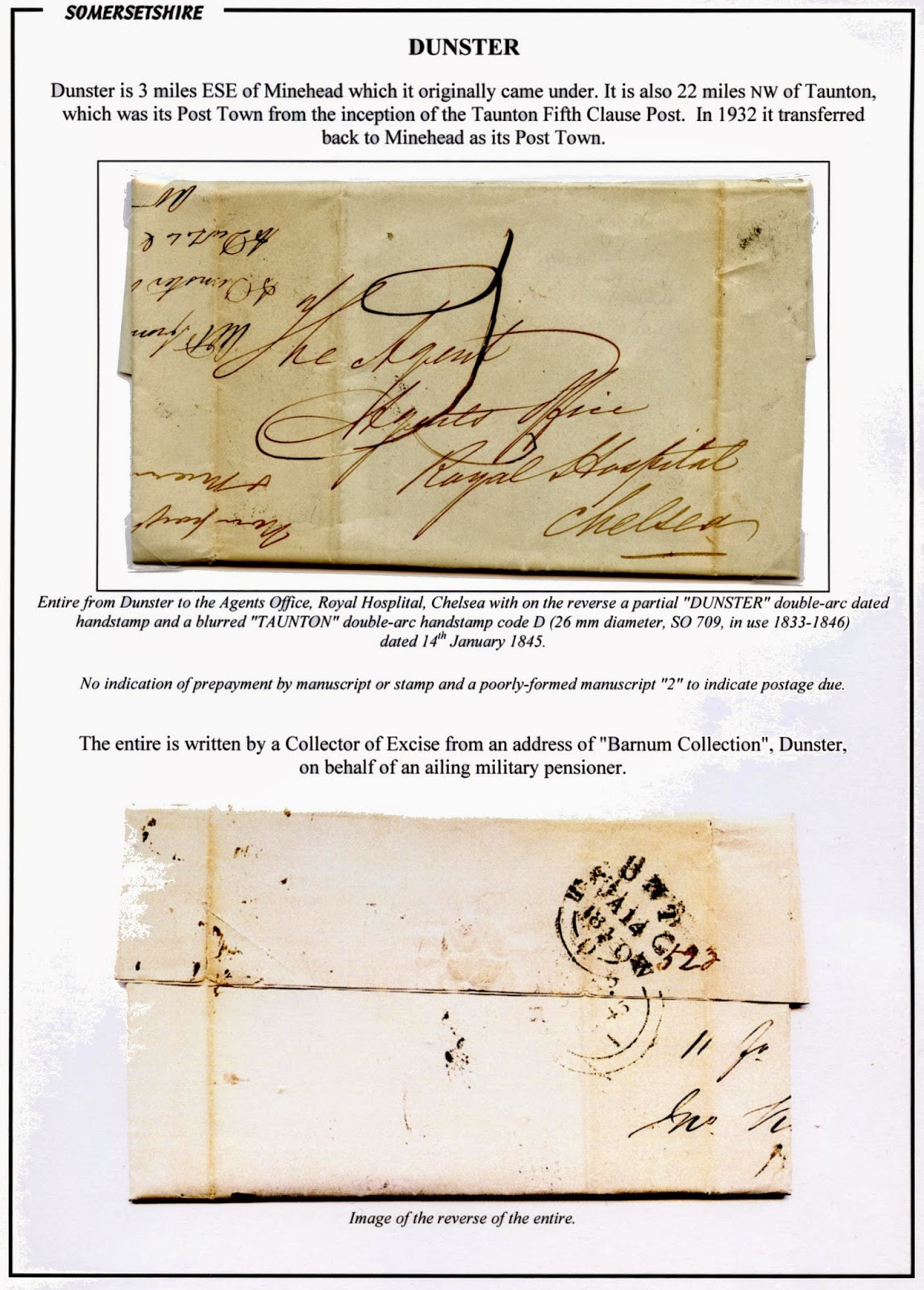 ... and now a couple of Bristol Cachets, starting with a violet framed "UNDELIVERED FOR REASON STATED / RETURN TO SENDER" on an item of mail in 1942 from Stamford, USA.  This item has some nice US pointing finger cachets as well. 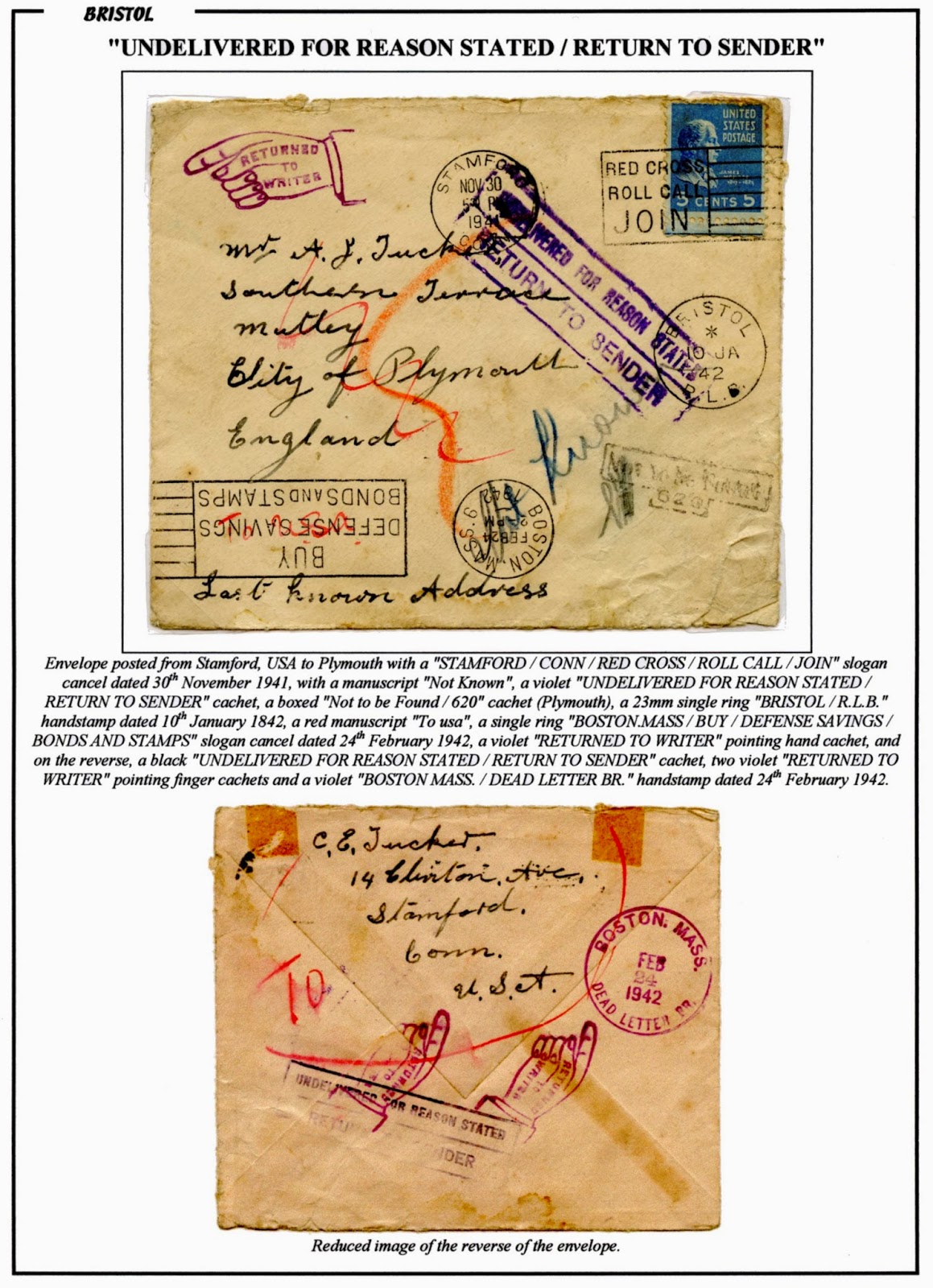 The next item is from 1981 and features a Post Office ambulance envelope with a framed cachet saying that "THE HEAD POSTMASTER IS VERY SORRY THAT THIS PACKET HAS BEEN ACCIDENTALLY DAMAGED IN THE POST". 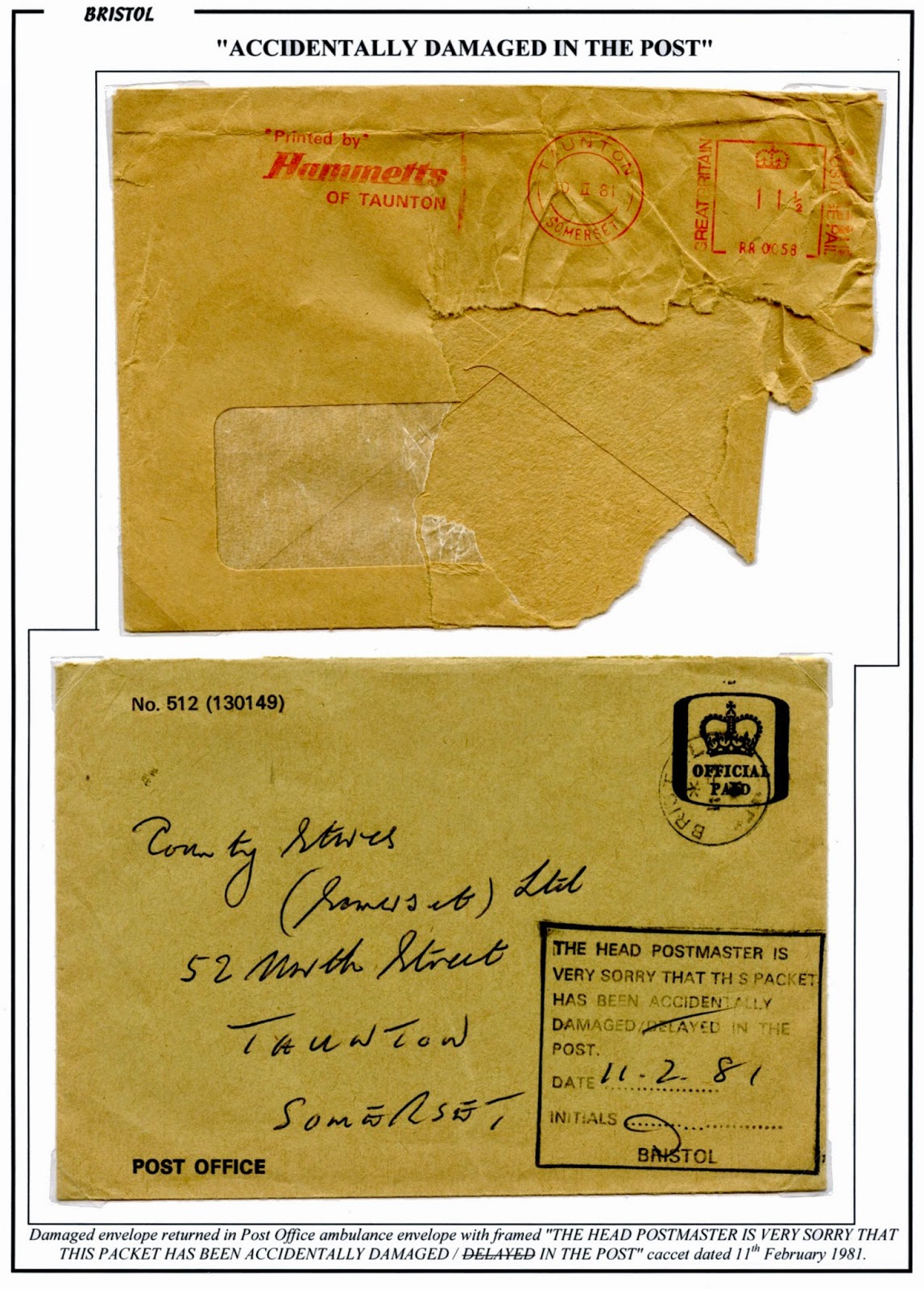 A couple of cachets from Taunton, starting with a green framed "INCORRECTLY POSTED IN A BUNDLE / OF METER-FRANKED SECOND CLASS / LETTERS AND SO LIABLE TO DELAY". 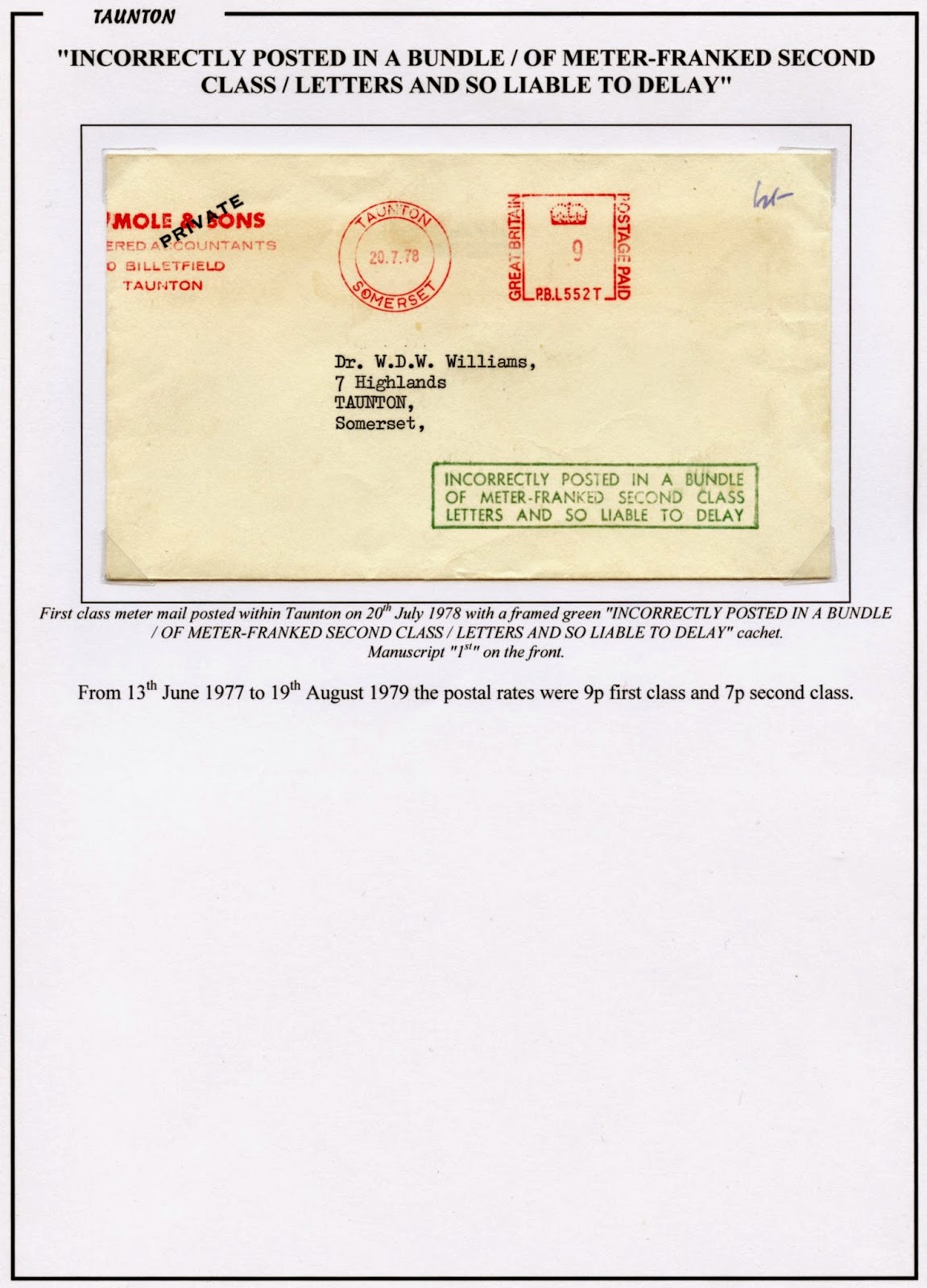 This second one from 1980 has a violet framed "INCOMPLETE ADDRESS" cachet, and was returned in a Post Office "Returned Postal Packet" envelope.  Because this latter envelope did not have any stamps it has an extremely clear example of the Post Office Telecommunications Museum slogan cancel. 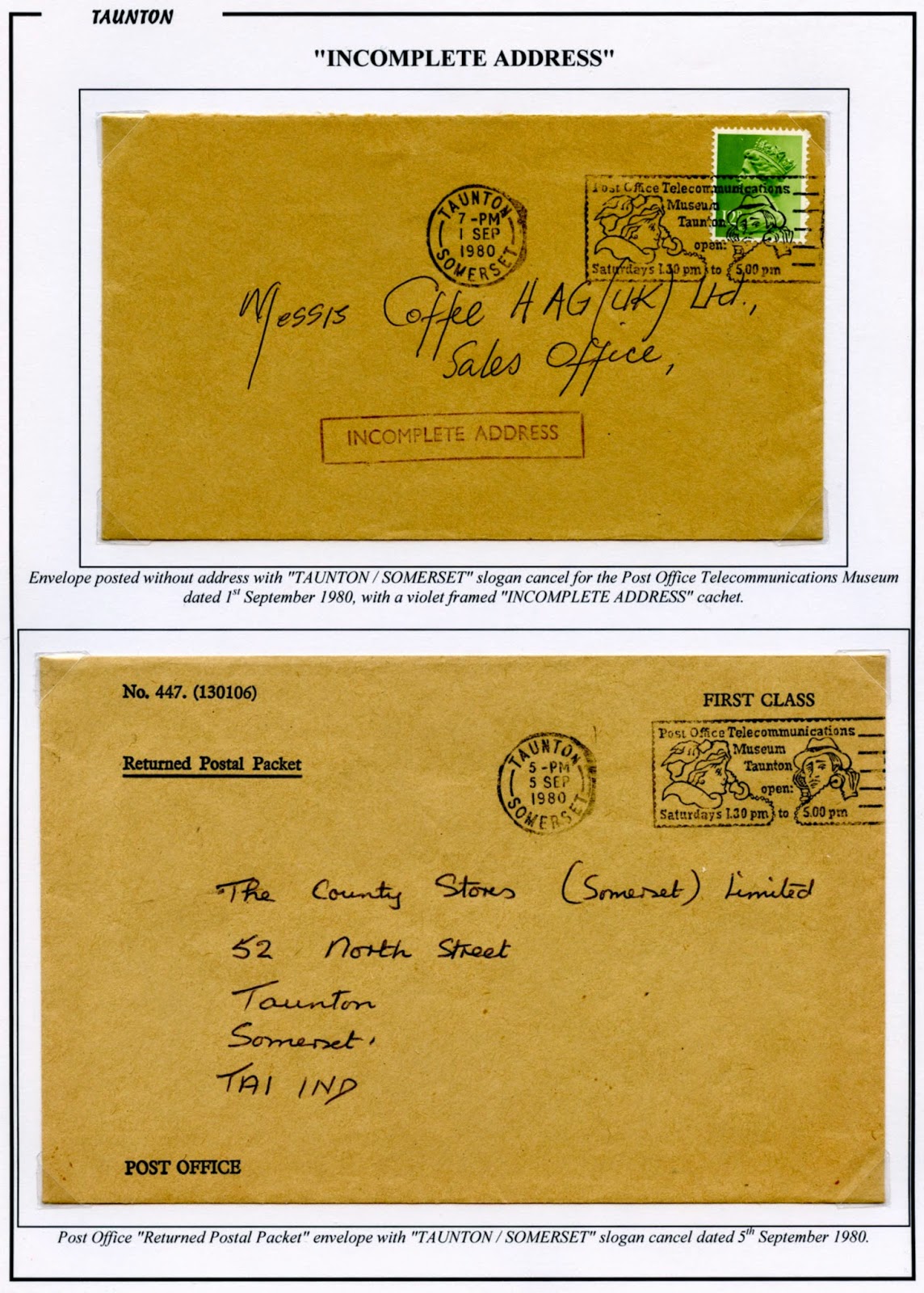 A much marked windowed envelope from County Hall, Taunton ... 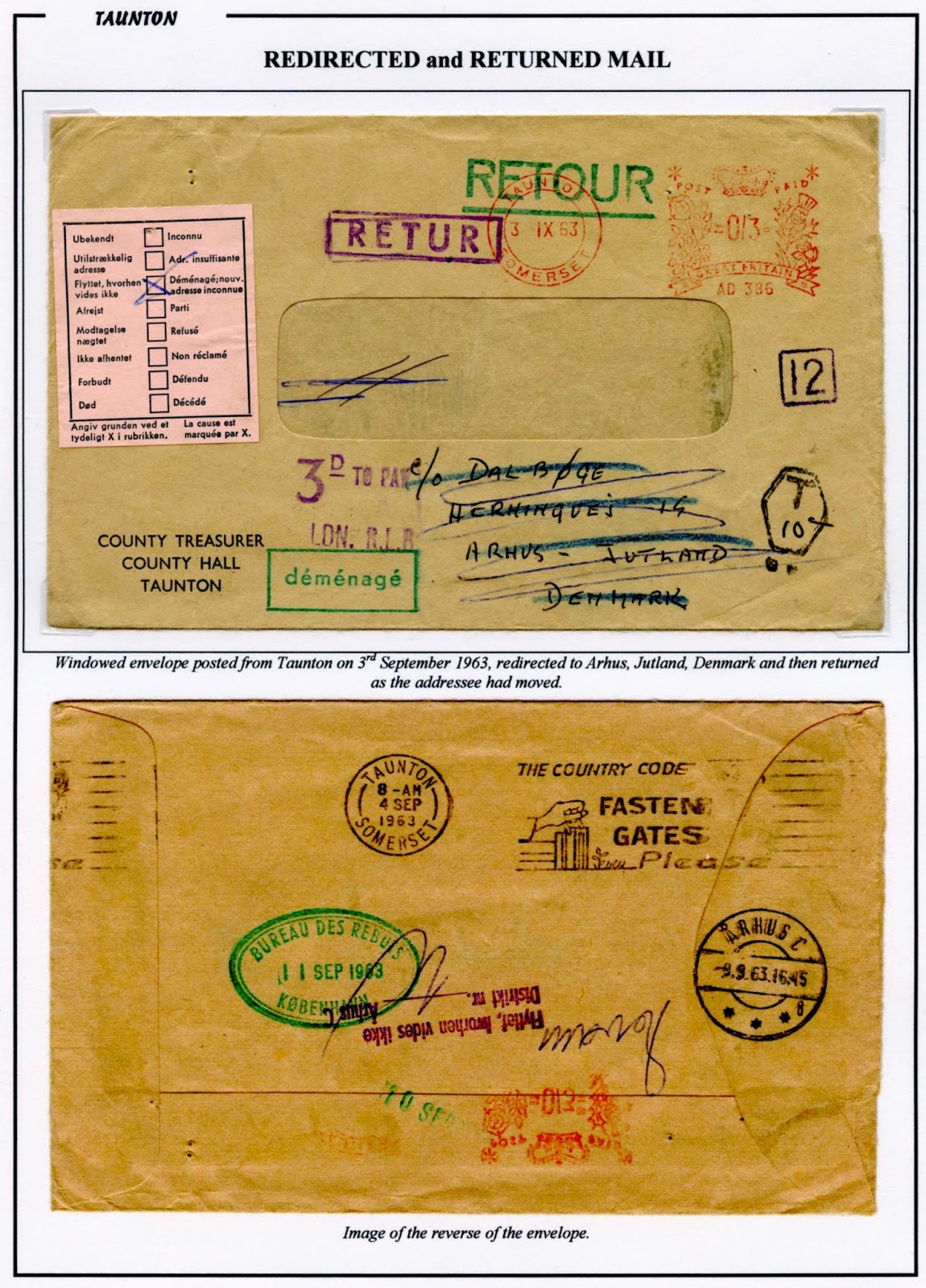 This second sheet describes what I believe all the markings indicated. 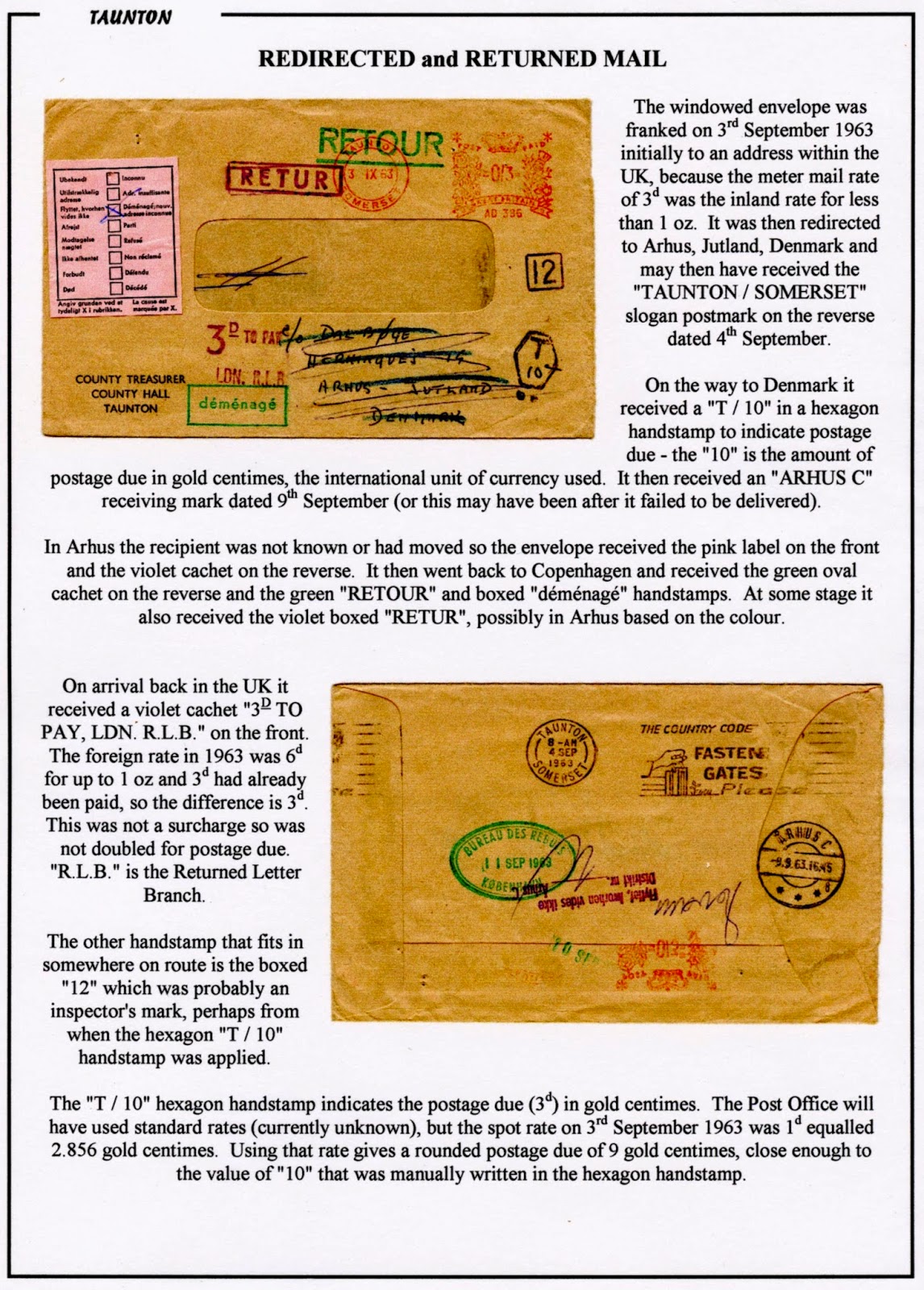 Another Taunton miscellany, starting with an ordinary postcard from December 1925 with the message that "As requested our closed car will be at Taunton Station ...".  It was from Marshalsea Bros. Ltd, Motor Body Builders and Engineers of Ilminster and Taunton, who had two telephone numbers, Ilminster 10 and Taunton 71.  Most communications in those days was by Post, very few people had telephones. 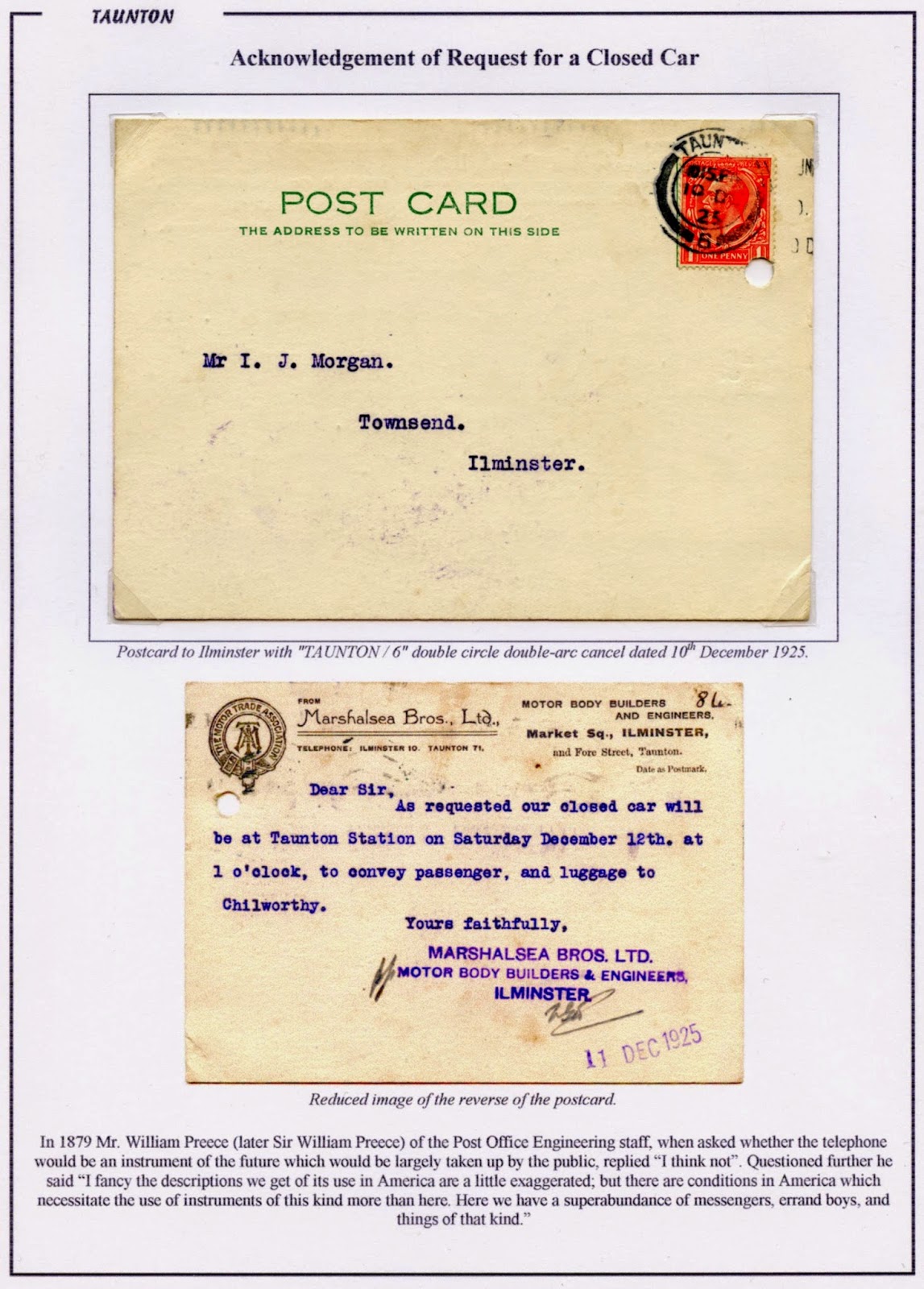 From the same era is this OHMS reminder to renew a "Wireless Receiving Station licence", dated March 1926. 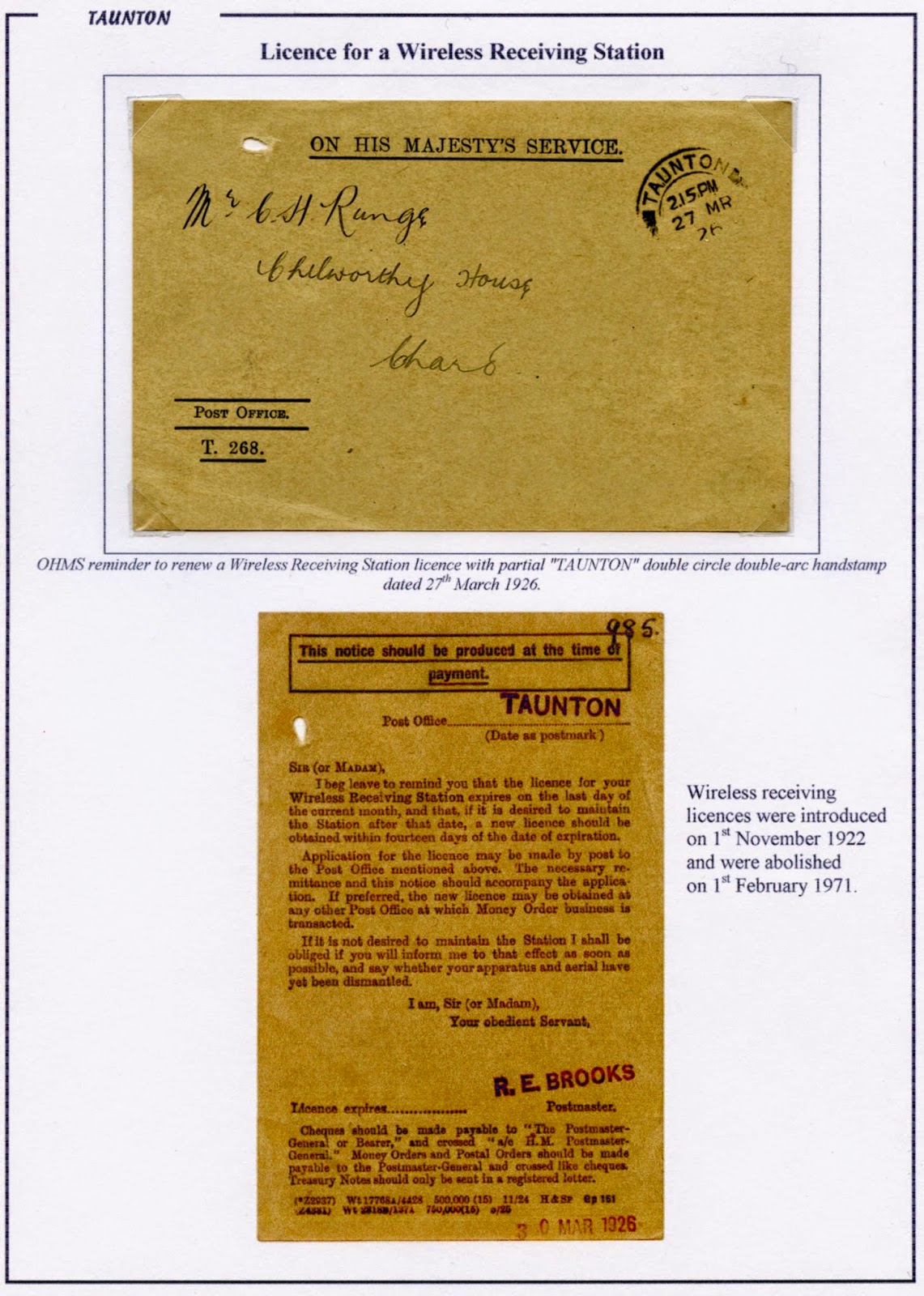 The sender of the envelope below attempted to use a bisected 3d stamp to pay the 1½d postage.  The result was postage due of double the deficiency or 3d, while the bisected stamp is carefully not cancelled. 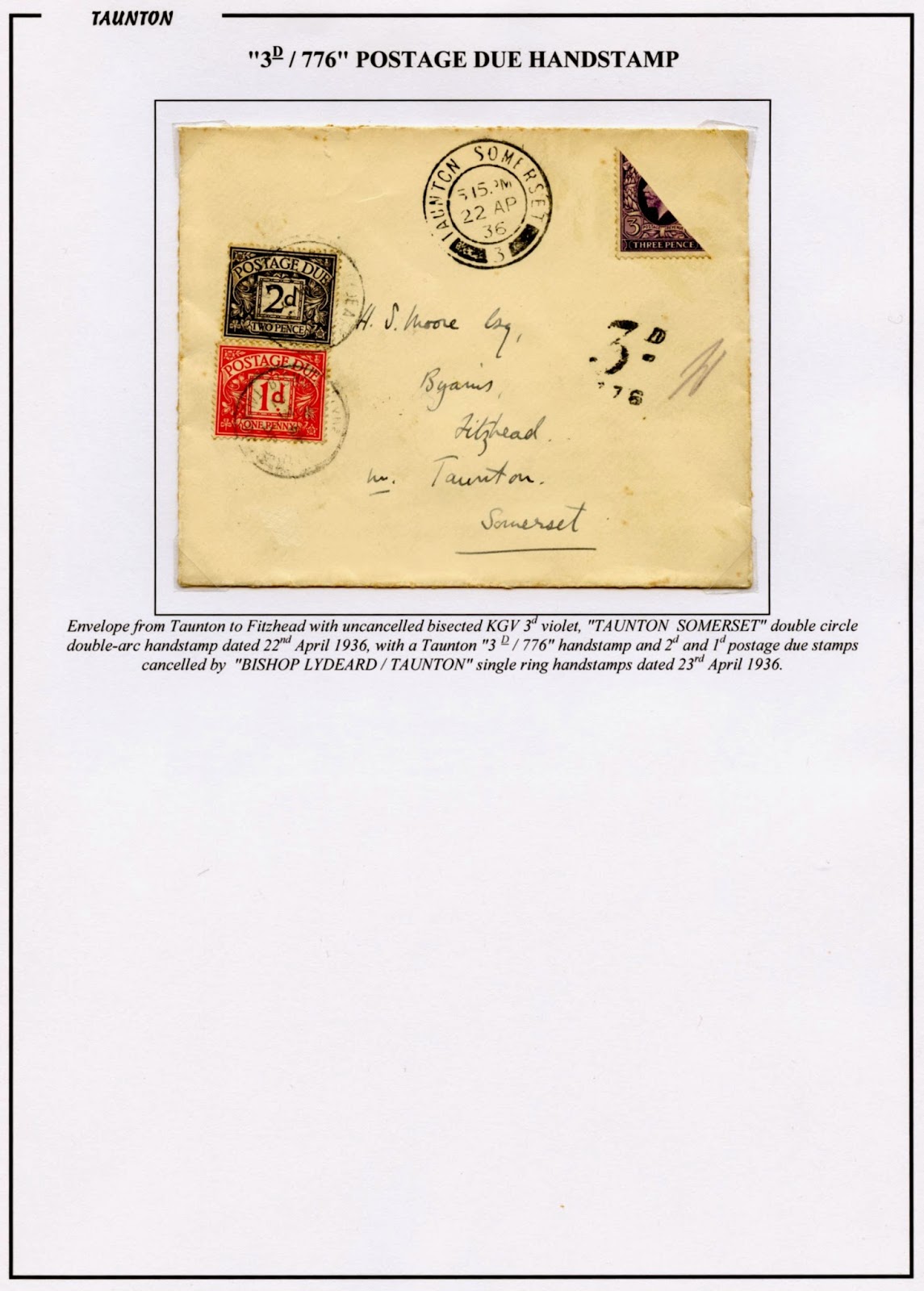 So not only was the 3d stamp wasted but the recipient also had to pay 3d - total cost 6d for 1½d postage.
Posted by Leamphil at 08:00 No comments:

Email ThisBlogThis!Share to TwitterShare to FacebookShare to Pinterest
Labels: Postage Due, Taunton

One would normally expect that the minimum postage due would be 1d, being double a deficiency of ½d, for example from the ½d postcard rate.  However there are some cases where the surcharge of ½d was not applied, one of them being Military Mail on active service. 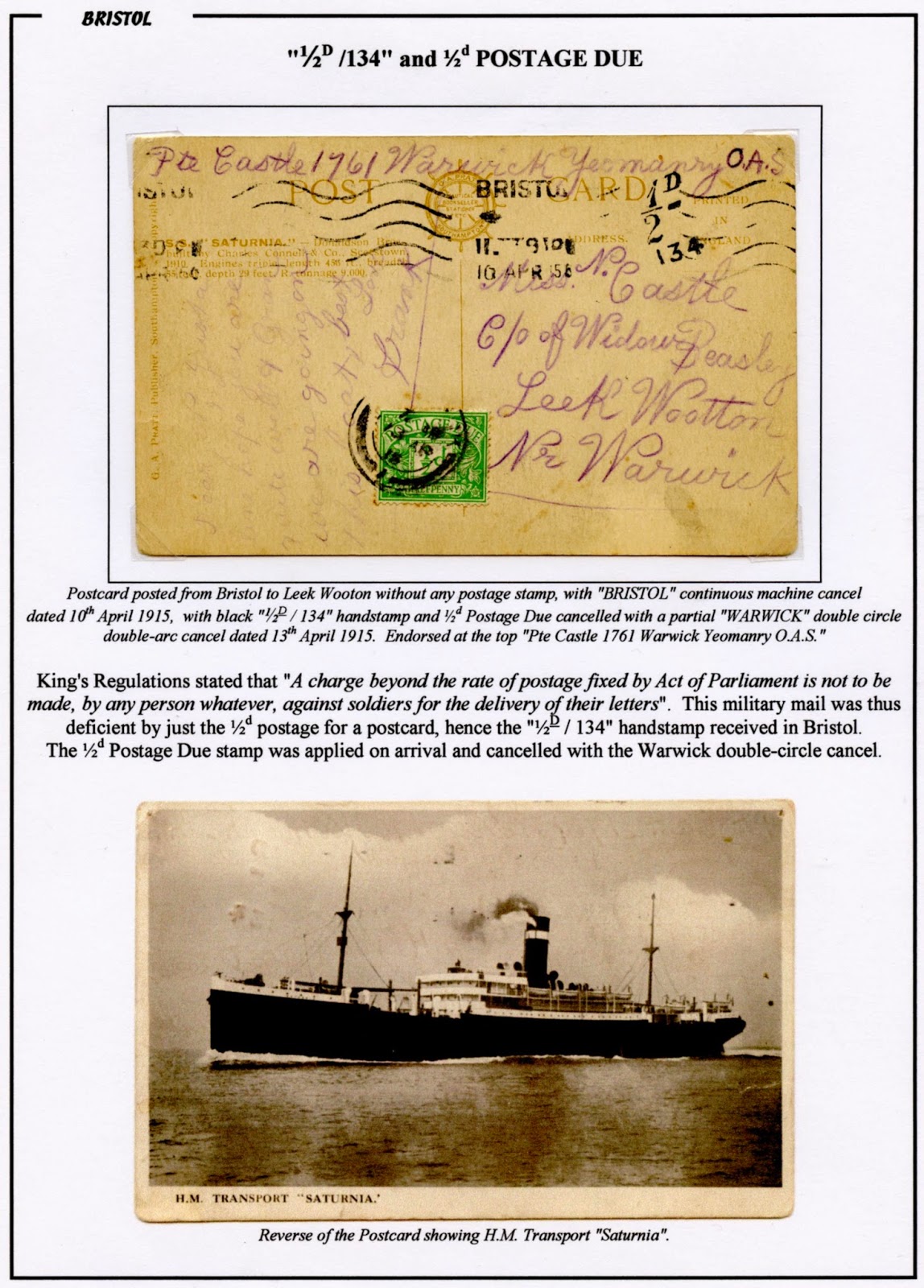 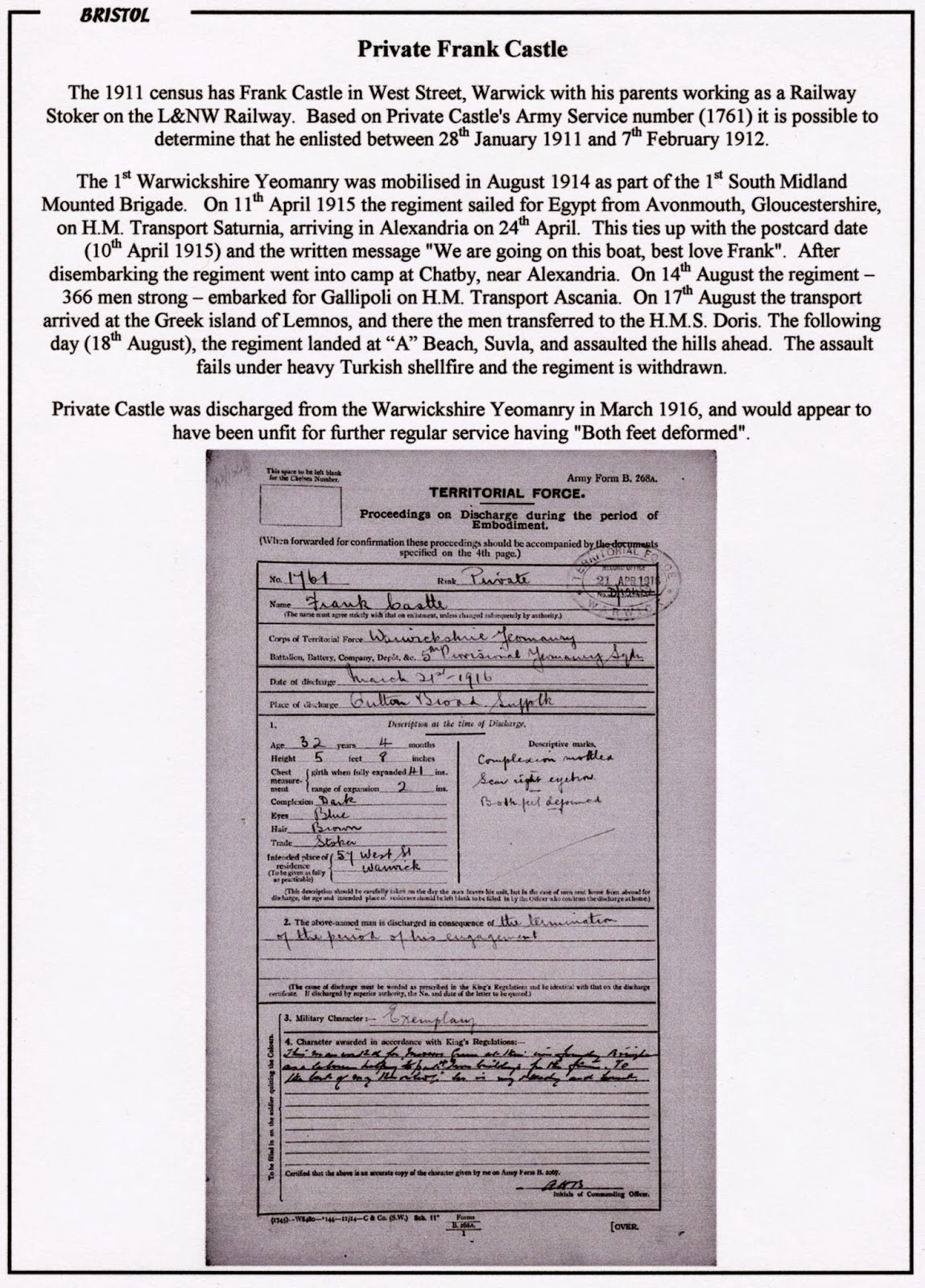 Private Frank Castle survived Gallipoli  but may well have been injured because he was discharged in April 1916 having "Both feet deformed".