I have just discovered (as part of the Leigh family archive that I bought from Cavendish) a partial example of the later "Crewkerne / Penny Post" unframed cancel (35x15 mm, SO 415) that according to the British County Catalogue (published in 1990) is previously only known in  the GPO archive.  Obviously this is subject to ratification (and there may have been other examples discovered since the BCC was published that I am not aware of).  I plan to take the item to the March 24th meeting of the S&DPHG to see what they think. 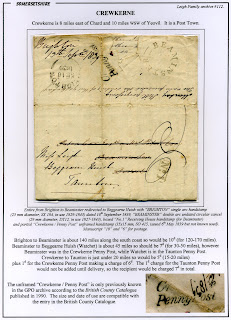 Here's a more detailed scan of the handstamp.

The partial unframed cancel is in the middle at the top.  The "Cr" at the start and the "e" at the end of Crewkerne are both visible, as is the "Penny Post".  The dimensions match (from the left-most part of the "P" of Penny to the right-most part of the "e" of Crewkerne, and the top of the "C" to the bottom of the "y"), while the date of use of 16th September 1839 is compatible with the date of issue of 6th May 1839.

The entire itself is fairly complicated, being from Brighton to Beaminster in Dorset redirected to Beggearne Huish (a parish of Watchet), and I'm not one hundred percent sure which handstamps were applied on which parts of its journey.  Obviously the "BRIGHTON" single arc dated handstamp was on the first leg and perhaps the "BEAMINSTER" double-arc handstamp was used as a receiving mark.  The framed "No.1" and "Crewkerne / Penny Post" handstamps should be on the second leg to Beggearne Huish.
Posted by Leamphil at 08:00 No comments:

The Leigh family of Bardon

At the end of June 2012 I was successful in two bids in Cavendish auction 752 and acquired the Dorset and Somerset lots of the Leigh family archive - a total of some 180 entires going into and out of Somerset.  I am still slowly going through the entires building up a list of dates, postal markings and who was writing to whom. 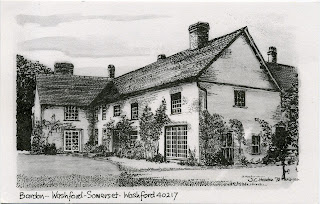 I think reading the contents is going to be beyond me - a few are readable but others have very difficult handwriting written across at right-angles to get as much in one one sheet as possible.

The following is a lineage of the Bardon family found on the internet - the archive relates to the William Leigh, "now of Bardon", the second son of Robert Leigh who married in 1770. 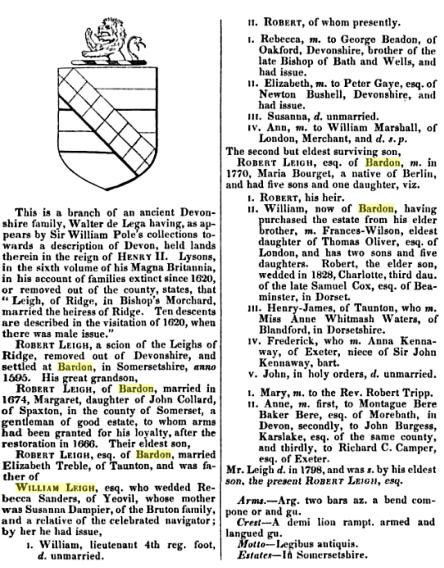 Bardon dates from the 14th century and was once a Grange of Cleeve Abbey – one mile down the Monks’ Path – a public way.  There are many legends surrounding Bardon, and there are some facts.  Probably the most interesting of these is the Bardon Papers now housed in the British Museum and associated with the trial of Mary, Queen of Scots and the Babington Plot.  The papers were discovered in 1834 when the thatching was renewed.  The Leigh family were in residence here as early as 1595 (Burkes 1864) until the beginning of the 20th Century.

As far as I know there is no definitive list of Post Offices that had Maltese Cross cancellations.  The "Encyclopaedia of the Maltese Cross Cancellations of Great Britain and Ireland" by Prof. SD. Rockoff and M. Jackson includes a number of towns in Somerset (Bath, Ichester, Minehead, Taunton, Wincanton) but only has the Maltese Crosses that are deemed to be unique.

As well as the towns with unique cancels I've got examples from Bridgwater (red and black) and more recently from Wells. 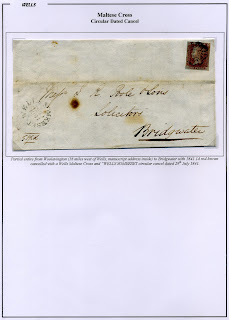 Scans of any other Somerset Maltese Crosses gratefully received !!

A new acquisition is this entire with a manuscript address inside of Dulverton, with a fairly rare "TIVERTON / Penny Post" handstamp (in use 1816-1835), to Wiveliscombe.  The postage was 6d, being 5d for the 18 miles from Tiverton to Wiveliscombe plus 1d for the Penny Post.  The date inside is 3rd July 1825. 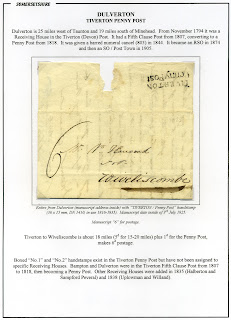 Dulverton was in the Tiverton Fifth Clause Post from 1807 to 1818, when it was converted to a Penny Post.  Boxed "No.1" and "No.2" handstamps are known but have not be assigned to specific Receiving Houses.
Posted by Leamphil at 08:00 No comments:

I've recently acquired an example of a "GLASTONBURY / SOMERSET" skeleton used on 11th October 1921.  According to the S&DPHG Journal this cancel is known used from 31st August 1921 to 16th March 1922 - a long time for a skeleton.  I wonder if it was in continuous use for this period ? 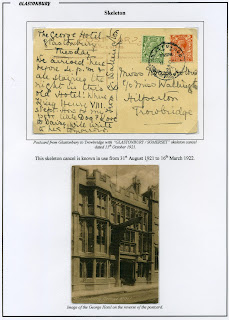 Some advice from the Craftworker, a magazine published in September 1947 price one shilling. 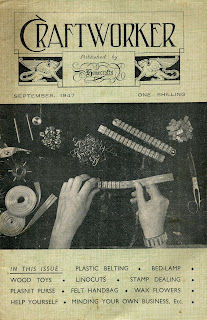 "Stamp Dealing is one of the ideal Home Businesses, and several £'s a week can be made in ones spare time." 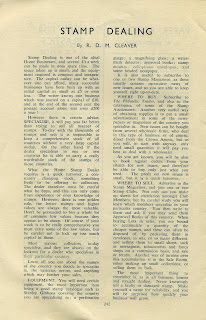 Of course, if this does not suit, one can always make a novel string holder: 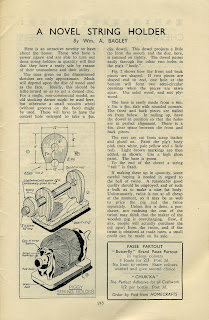 Email ThisBlogThis!Share to TwitterShare to FacebookShare to Pinterest
Labels: Craftworker

A couple of sheets of commemorative cancels relating to the City of Wells. 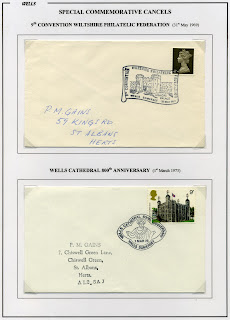 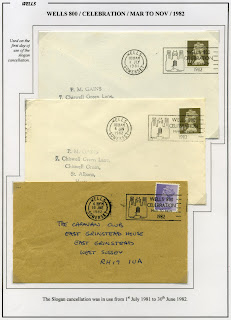 And a couple of sheets of commemorative cancels relating to H.G. Wells and science fiction ! 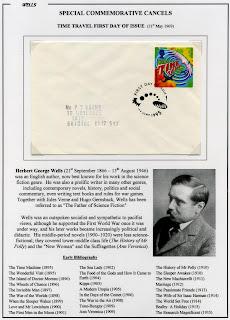 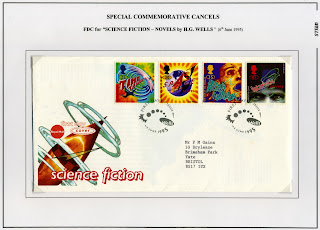 There was a P.O.W. camp at Wookey Hole Road, Wells during WW II.  Here is a letter sent by POW Post from there to the USA. 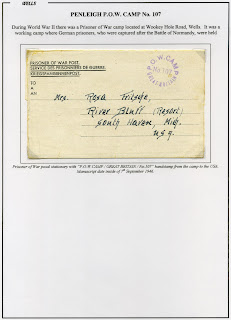 A couple of self-inking datestamp cancels from local post offices in Wells. 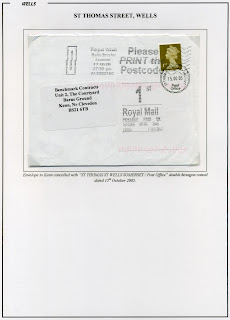 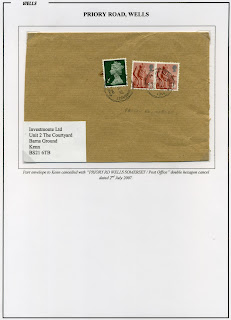 A miscellany of other cancels from Wells - first a couple of different single ring cancels from 1903 and 1915. 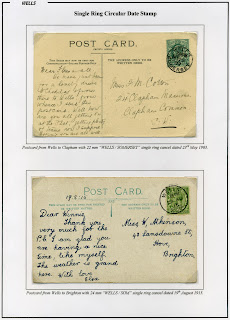 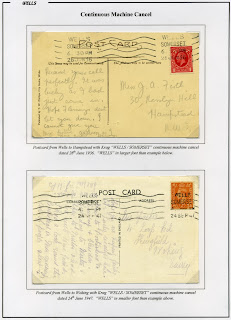 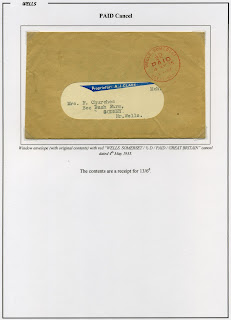 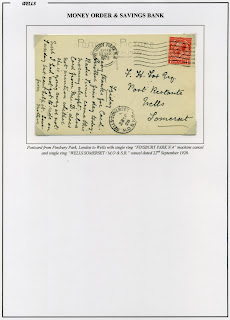