Firstly an introduction from Pigot's  Directory of 1844: 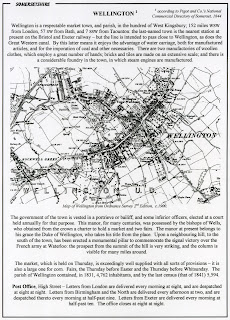 According to the British County Catalogue the earliest handstamps from Wellington are from 1705 - unfortunately I don't have any before 1795. 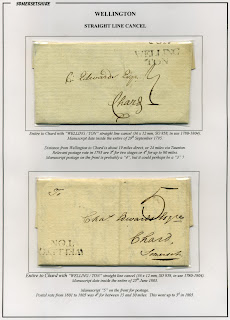 This entire from 1799 has been charged 1d before the introduction of the Penny Post and when the lowest rate in the General Post was 3d - so was probably a private arrangement with the local Postmaster. 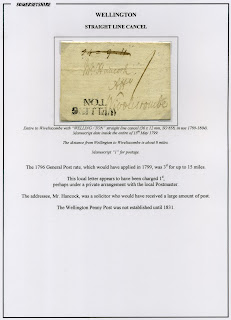 Email ThisBlogThis!Share to TwitterShare to FacebookShare to Pinterest
Labels: Wellington

A couple of Frome items

Here are a couple of Frome items that I've recently acquired - firstly an entire with an Inspector's mark (a crown) along with the postage being uprated because there was an enclosure. 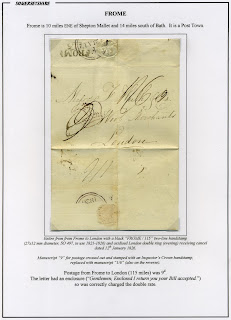 And secondly an "AR" form from Frome: 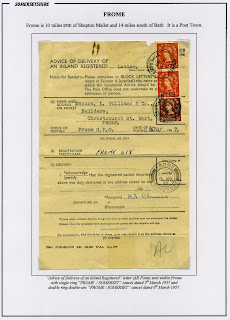 Here's an item I acquired at the recent S&DPHG meeting in Chard.  It is a thin wrappper and looks like a newspaper wrapper.  It bears an assortment of handstamps, a manuscript endorsement and postage due.

In particular it is endorsed "Contains Letter" so the first question that occurred to me was whether it was charged extra because the Post Office had found a letter inside something sent as a newpaper or printed matter. 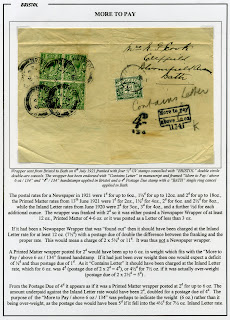 The conclusion I came to was that the wrapper must have been posted as Printed Matter (2d for 4-6 oz.) and the letter or just a written message discovered inside.  The handstamp "More to Pay / above 6 oz / 134" doesn't exactly fit any scenario if it was taken literally as indicating that the wrapper was over-weight (a postage due of at least 5d would be required).  I've assumed that it was there to indicate the actual weight limit being charged (6 oz.) which does fit with both the initial franking of 2d under the Printed Matter rate and the 4d postage due when it was charged at the Inland Letter rate.

Please let me know if you think my conclusions are wrong !
Posted by Leamphil at 08:00 No comments:

An item recently acquired from eBay: 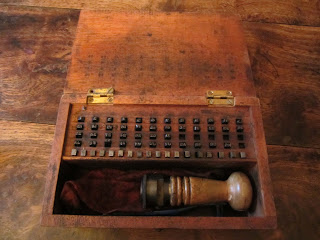 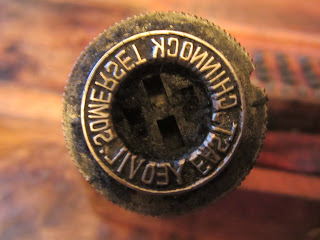 The year slugs in the box date the handstamp to the late 1980s - 2000 - it was around this date that the Post Office in East Chinnock moved.

Here is a copy of the cancel: 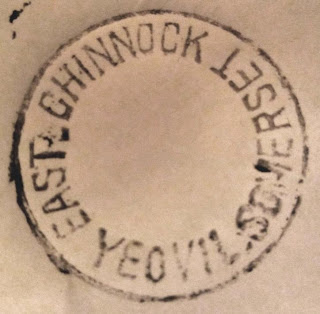 One of the questions that puzzled me when I started into Postal History is how, in the early days of the Post, did a stage (post-)master (typically an inn-keeper) get back his horses when they had been provided to a messenger or traveller riding post ?  And how did a private individual get back their horse if it had been requisitioned to ride post ?

In 1396 (King Richard II) a royal patent set the rate of hire for horses, that petitioners be in nonwise compelled to let their horses for hire unless paid promptly, and that for the better security of the horses a branding-iron be kept in each of these towns by an approved person for branding, without payment, horses on hire.

From the provision of arrangements to brand horses, it it clear that it was expected that horses would be returned to their original owners.

This is reinforced in Elizabethan times when more than half of the expense of riding post arose from the compulsory employment of the guide; but this was inevitable as long as so many of the horses used were requisitioned from private stables.  It was recognised that to have one’s horse taken “to run post” was always felt a bitter grievance, and the least that the Government could do was to guarantee that it should not be ridden beyond the next stage, and should promptly be returned.  Hence the necessity of the guide and the emphasis laid by all the Elizabethan regulations on the obligation to employ him.

In 1616 (James I, & VI of Scotland) a proposal for an extension of the posting system in Scotland provided that:
“To spair unnecessar charges to his Majesties lieges, and that no necessitie of boyes or other attendantes go with the jomey horsis, giff possibly it can be . . . the Maister of Poistes sall have speciale cair that sic correspondence be amange the jorney maisteres that lyis maist adjacent togidder, that ilkane of thame on reasonable conditiones sall cair for utheris horses resorting to thame, intertaine thame, and use thame kyndlie, and keip reciprocation togidder, ayther in back-reconducing of thame as the commoditie sall offer, or detening thame sum schort space”

In England the first reference to such an obviously sensible arrangement occurs in the Orders of 1635, which instruct the traveller that “if he shall have occasion but for one horse, paying for him 2½d. for every mile; if two horses then to take a guide and pay 5d. a mile.”  Until this concession was made the only way of avoiding the expense of a mounted guide was to time one’s journey so as to ride with the postboy who carried the Packet.

There appear to be three different types of person riding post:

Looking at these in turn, in the first case it would seem obvious that the postboy returned to the original stage with the horse that he had ridden, possibly with the next post going the other way.

In the second case, in the early days the traveller had to employ a guide on a second horse, who then had the responsbility of returning both horses back to their origin.  One imagines that only travellers who were well-known to the postmaster would be able to travel without a guide.  Travellers riding post would not be able to requisition a horse to ride, unless they had a warrant – which would make them the third type of person riding post (though people riding post under warrant were not always official messengers due to the abuse of the privilege to grant warrants).

In the third case, the official messenger could be trusted to leave the horse at the next stage where he would change it for a fresh one.  I would assume that the next postboy arriving from the original stage would return with both horse, and that the postmasters would have an unofficial reciprocal arrangement to look after each other’s horses.

That just about covers the case where the horse belonged to the postmaster.  The postmasters had to provide horses to take the post to the next stage or for offical messengers, for which they got paid by the Exchequer (eventually, see below).  They made their money by providing horses to travellers riding post.  As long as the volume of post was reasonably constant the postmaster could forecast how many horses were needed for the post, and thus how many could be used for the much more profitable jobbing.  However this was not always the case due to the abuse of the privilege to grant warrants (like the abuse of the “free” post franking).

In the case where no suitable horse was available to ride post, upon presentment of the traveller’s warrant the postmaster had the right to take a suitable horse, to the detriment of the owner of horse.  Horses could be taken from Inns, which caused a particular problem to the inn-keepers as they were responsible for any injury to their guests’s horses.

To cover this some towns lying on busy high roads kept a few horses ready for an emergency, paying for these by levying a town rate.  The chief London inn keepers paid an “annual Benevolence” to the Post of Bishopsgate “to spare their guests’ horses from his Majesty’s service”.

By the time of James I the Government adopted a cynical expedient of making the postmasters their own collectors.  Hitherto a post had no power to requisition until the traveller’s warrant was put in his hand, but it became the practice to furnish the post with a “warrant dormant”, empowering him to take up horses (or money in lieu of horses) at will within a specified area.  In effect he could now walk into a harvest field and exact a payment from the farmer for not taking his horses out of the shafts.  Having thus provided the posts with the a weapon of blackmail, the Government seems to have felt that it had done enough for them and allowed their pay to fall steadily into arrears.

It would seem to me that the return of a private horse to its owner in good condition after it had been requisitioned to ride post, would be a matter of some real concern in an environment where the postmasters had little real expectation of being paid by the Government.  The owner of a horse which was damaged or killed when requisitioned to ride post would probably have had great difficulty getting recompense from the Exchequer.

Later, when the post had been put on a better footing there would probably have been less likelyhood of private horses being called on, and the introduction of the mail-coach which ran to a timetable would have put the management of the horses into a business environment.

Bibliography:
Posted by Leamphil at 08:00 No comments:

A selection of later cancels for Shepton Mallet.  First a couple of Duplex cancels, a 4-bar (4VOD) and a 3-bar (3VOD) cancel.  According to Parmenter there are also 4HOS, 3HOS, 3VOS and 3CD cancels. 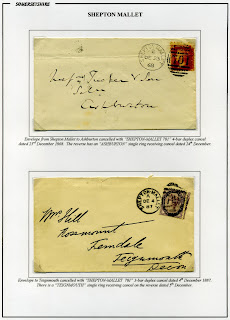 Next a double circle double-arc cancel from 1905. 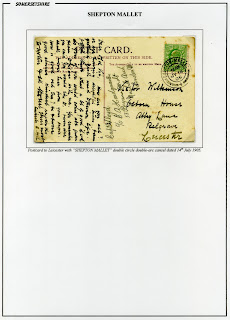 And then two examples of skeleton cancels from July-August 1909. 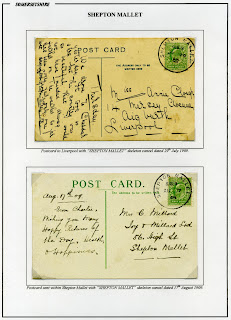 A single ring "SHEPTON MALLET.SOMERSET" cancel on a registered piece. 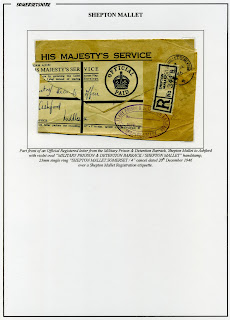 And finally a slogan cancel from the mid-1960s with a triangular "701" instead of the town cancel. 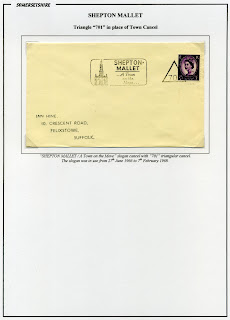 The entire below from 11th May 1839 illustrates the official 2d rate for up to 8 miles - as opposed to the unofficial and "illegal" 2d rate used on "short" Penny Post letters that did not go into the General Post.  The entire has a circular handstamp in blue (known in this colour from 1836-1842). 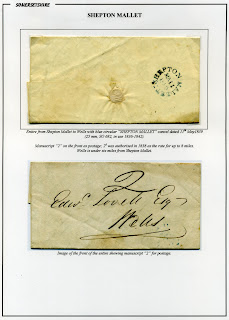 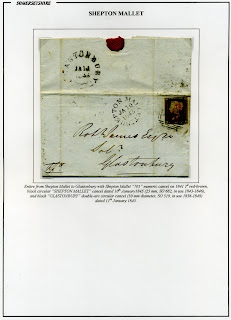 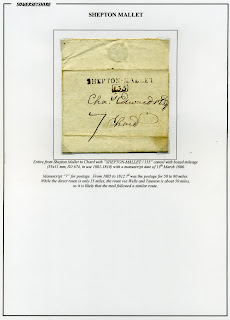 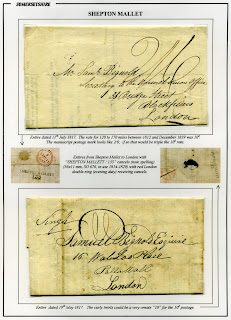 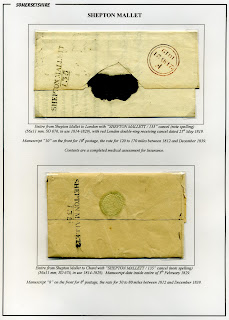 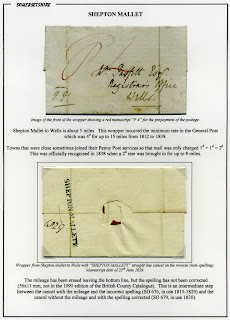 The fourth handstamp in use in 1830, of which unfortunately I do not have an example, has the mileage erased and the mis-spelling corrected to "Mallet"
Posted by Leamphil at 08:00 No comments: