The entire below from December 1829 was addressed to "Winsham, near Crewkern".  It went to Crewkerne and received a manuscript "Misdirected to" with a "CREWKERNE" mileage erased handstamp.  Winsham came under Chard rather than Crewkerne. 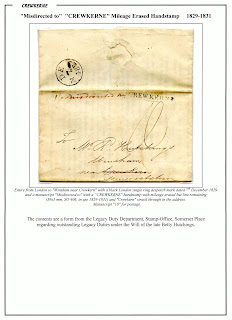 A little bit earlier, in June 1828, the entire below came from Thorncombe in Dorset to Chard in the Chard Penny Post. 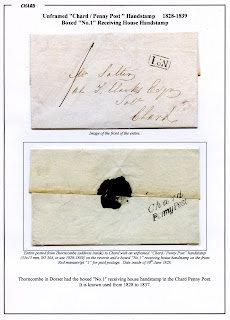 The entire below went from India to London by way of Portsmouth and Bath. 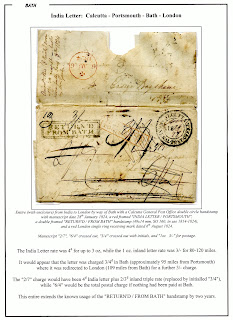 The lower part of the address is crossed out but appears to have been addressed to try Bath first before going to London (one can just about make out "Bath, England" at the bottom).  It has a red framed "INDIA LETTER / PORTSMOUTH" - as an India letter it had a reduced ship letter charge of 4d for up to 3 oz.

I believe this was paid in Bath and it then got charged a further 3/- for the 1oz inland letter rate from Bath to London.  The "6/4" crossed out could have been a charge for the whole route Portsmouth - Bath - London which it seems was cancelled presumably because payment had been made in Bath.
Posted by Leamphil at 08:00 No comments:

The entire below from 1726 has, I think, a "P" for privilege postal marking.  Before 1764 letters which went through the General Post free did not receive a special handstamp but were often cancelled with a manuscript "P" (rather than the postage charge).  This "P" marking often does not look much like a 'P', as shown by illustrations in "Herewith My Frank" by JW Lovegrove.

The entire below is franked with "Frank   E Harley Audt".  Edward Harley had been an MP until 1722 (so would not get free postage in that regard), but was appointed joint Auditor of the Imprest for Life in 1702.  The Auditor of the Imprests was a profitable office of the Exchequer, responsible for auditing the accounts of officers of the English crown to whom money was issued for government expenditure.  There is no definitive list of which offices had free franking privilege in 1726, but a list from 1838 does include the Audit Office, which replaced the Auditors of the Imprest when they were abolished in 1785. 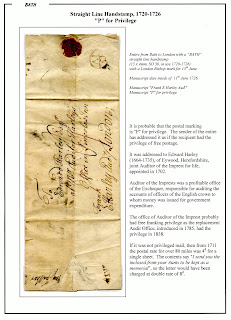 The Dulverton "803" horizontal oval cancel from 1848 illustrated below does not appear to match either of the two cancels recorded in Parmenter & Smith, having four bars below rather than three (to my mind this cancel looks more like an 1844-type cancel than the one illustrated in the reference book). 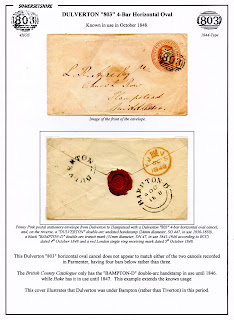 It also has a "BAMPTON-D" double-arc cancel which the British County Catalogue only has in use until 1846 while Hake in Postal Markings of Devon has it in use until 1847, so this extends the known usage of this handstamp.  The cover illustrates that Dulverton was under Bampton rather than Tiverton during this period.
Posted by Leamphil at 08:00 No comments:

Email ThisBlogThis!Share to TwitterShare to FacebookShare to Pinterest
Labels: Dulverton 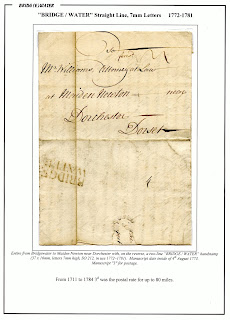 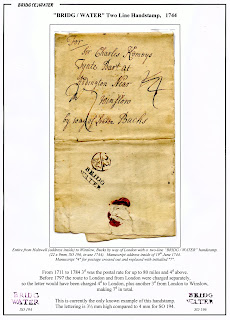 Extended date for SO 623 "MINEHEAD"

The SO 623 "MINEHEAD" handstamp (40x4 mm) was previously only known used in 1800.  The second entire on the sheet below extends the known usage to September 1805. 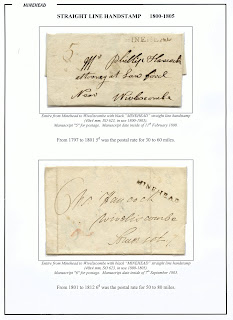 Bedminster is two miles south of Bristol, just the south side of the River Avon, so is in Somerset under my definition.  The Bristol Postal History Group's four volume book on the "Postal History of Bristol" currently identifies six single ring handstamps.  The sheet below has a further two different handstamps, a "BEDMINSTER BRISTOL" 23mm single ring used in February 1932, and a "BEDMINSTER . BRISTOL 3" 23mm single ring (without a dot before the "3") used in 1964. 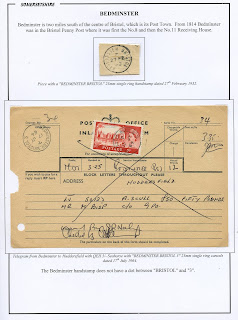 Email ThisBlogThis!Share to TwitterShare to FacebookShare to Pinterest
Labels: Bedminster

Not really to do with Somerset but here's a receipt from the Bridgewater Trust Collieries, issued to the Trustees of the late Duke of Bridgewater in 1898. 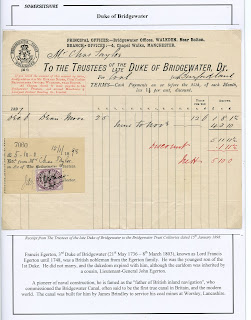