The introduction of a Bristol-Taunton-Barnstaple coach in 1827 meant that all mail to/from Wiveliscombe was routed through Taunton.  This led to complaints from Mr. Hancock (a solicitor in Wiveliscombe) that his mail to the west went eastwards to Taunton on one coach and then back out again on another.

As a result of this, in 1829 Wiveliscombe was made a Bye-Office of Taunton so letters were charged at the General Post Rate.

In 1829 the Wiveliscombe mileage mark was replaced with an undated circular handstamp.  This handstamp also exists in blue according to the British County Catalogue.  Note the spelling "WIVELISCOMB" - perhaps they just ran out of room ! 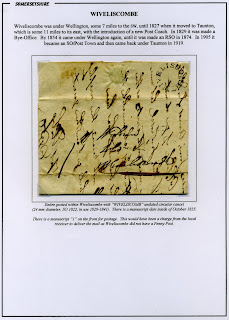 The next cancel, from1841 is a dated circular cancel.  The BCC just has this in red, but the example below is in black. 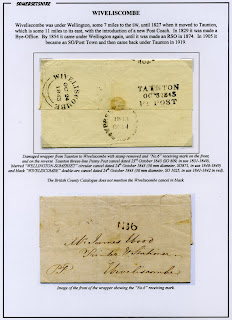