Below is a philatelic cover with the vignette of the Bath Philatelic Congresss of Great Britain tied to the cover with the special "PHILATELIC CONGRESS / BATH" double ring cancel on the last day of Congress. 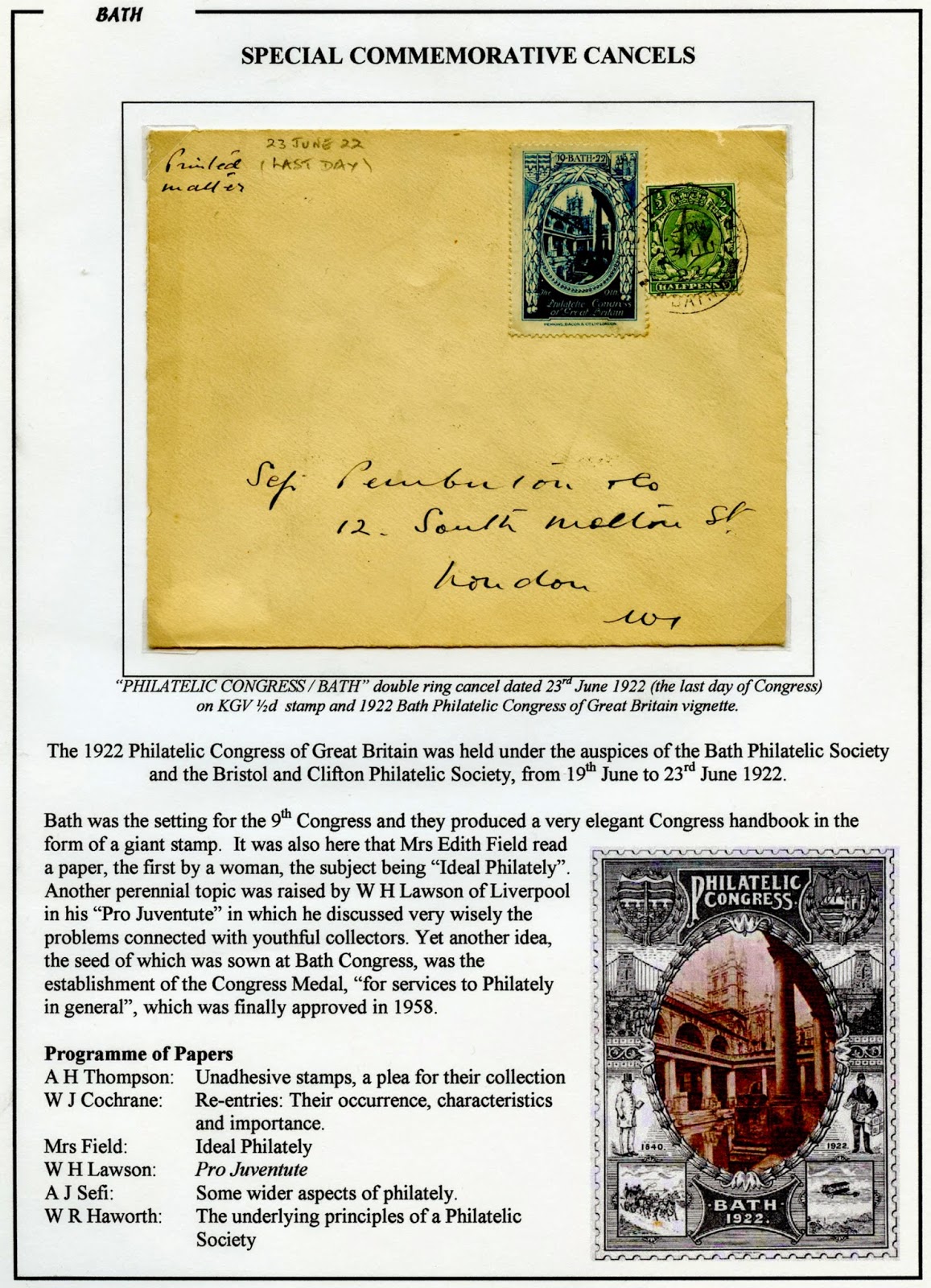 Below is a "Sutton Mallet / Bridgwater" climax rubber cancel from 1923 which appears to be a new type, later than previously known examples. 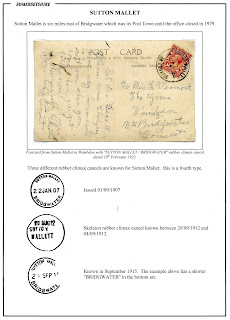 Two philatelic items from Alfred Smith of Bath, Foreign Stamp Importers, from 1892.  The Registered item was cancelled by the counter staff while the other item received duplex cancels. 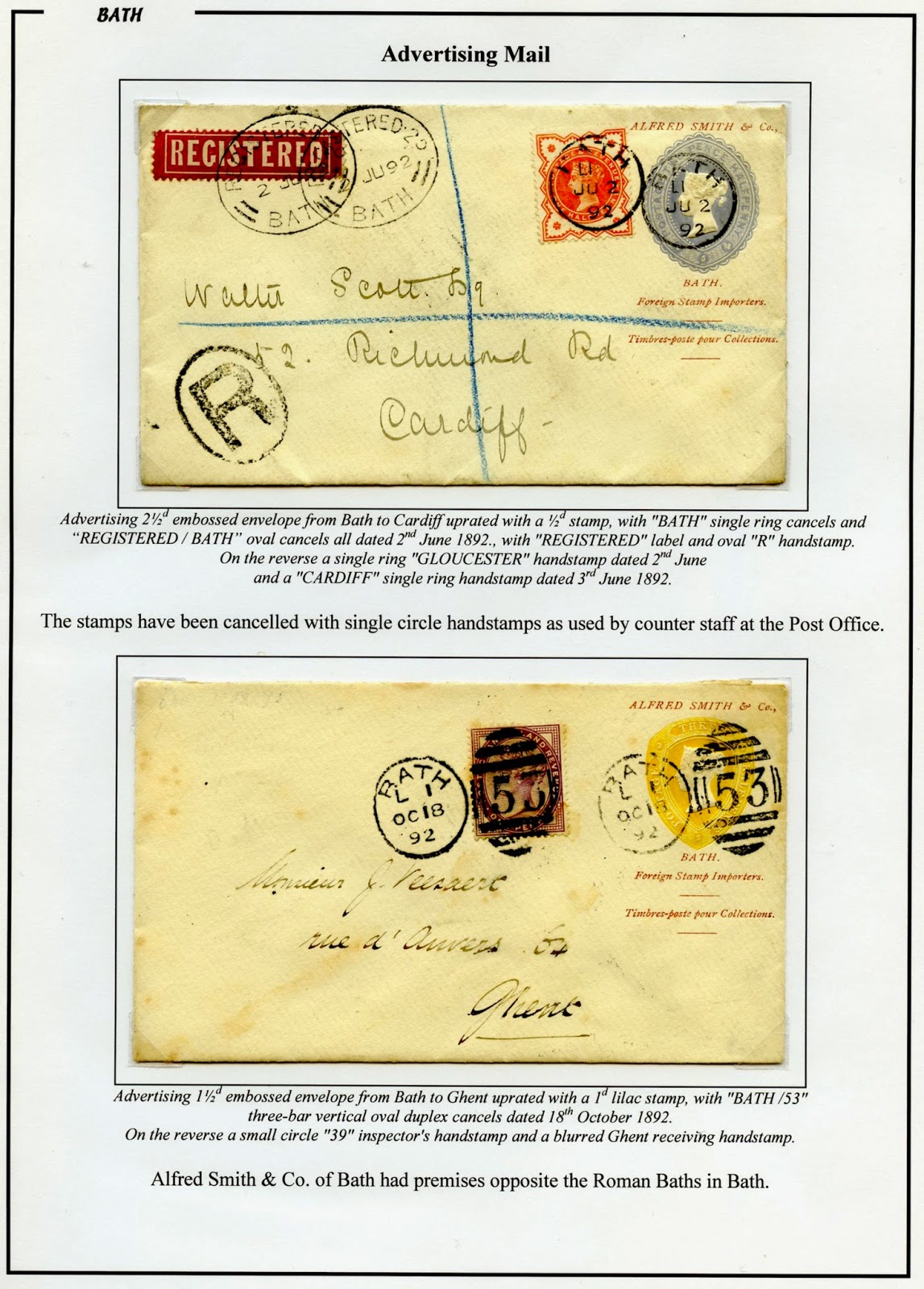 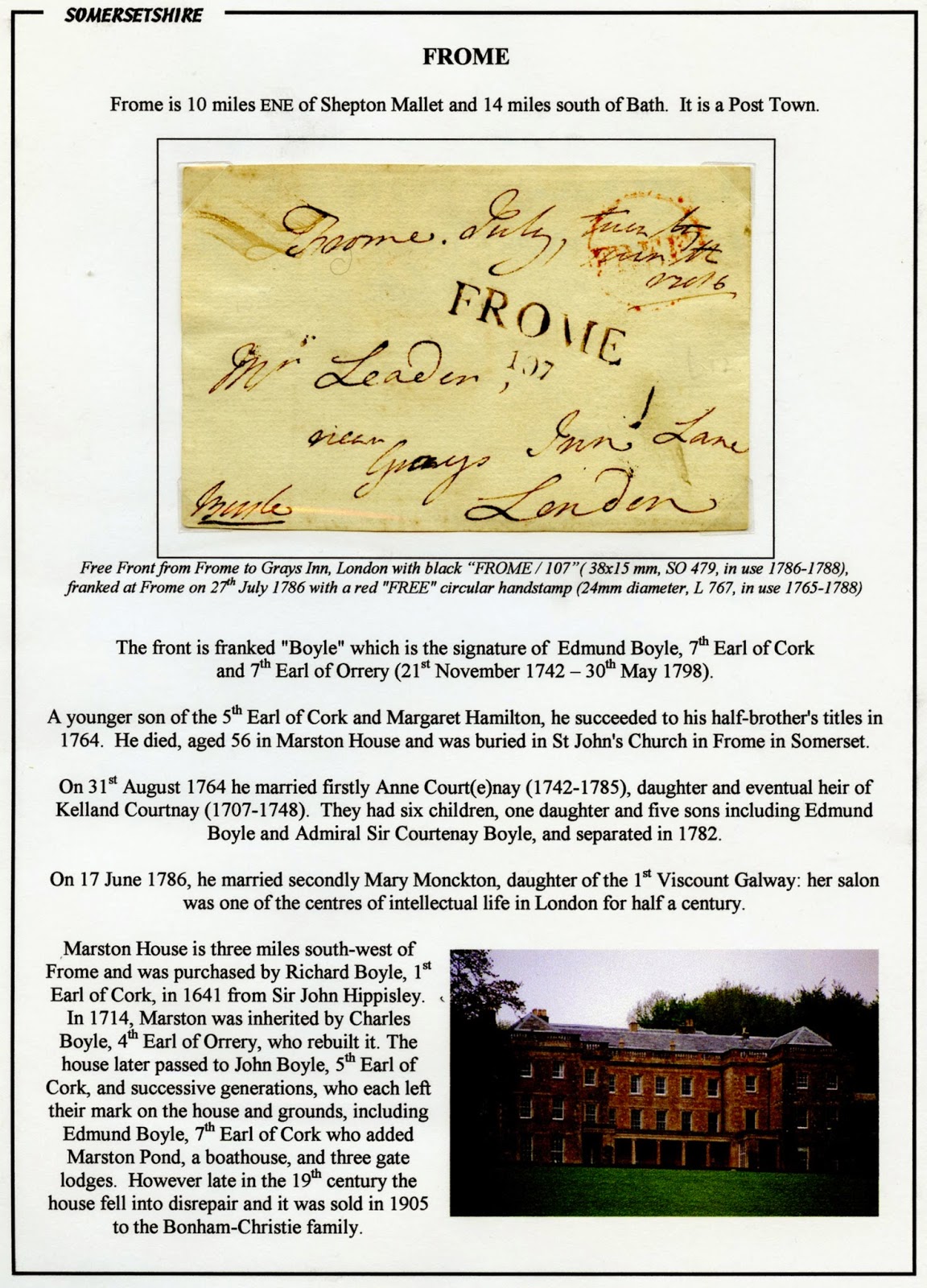 The entire below is a bit of a mystery.  It was written in "Taunton" in 1834 and appears to have received a boxed "No.1" receiving house handstamp on its way as a short letter (one that did not go in the General Post) to Chapel Cleeve, near Washford, and was charged 2d as a short letter.

It was then reposted to Bath at the Washford receiving house, getting the unboxed "No.7" receiving house handstamp, and was charged 9d in total (1d for the Penny Post plus 8d for 50-80 miles in the General Post). 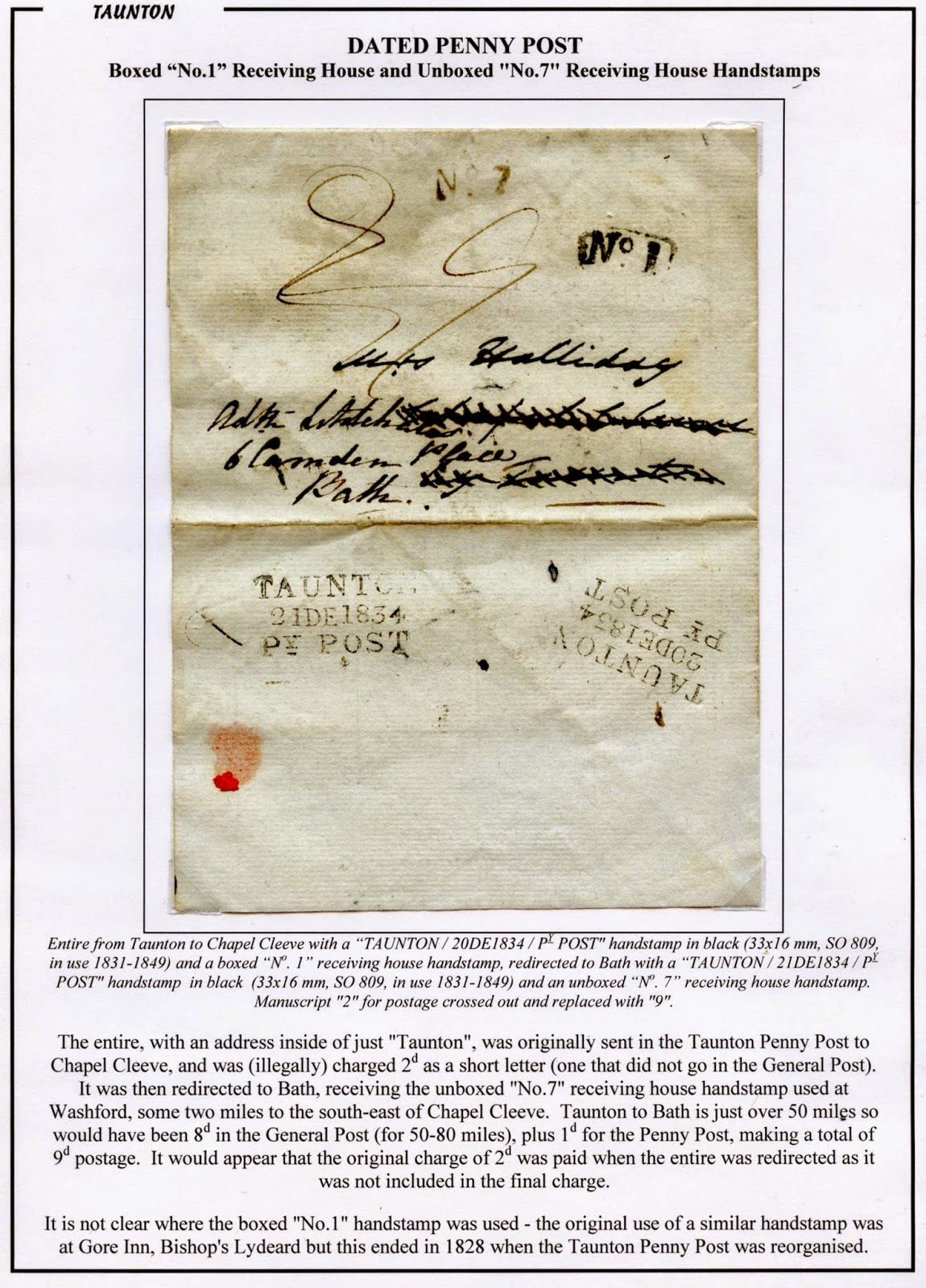 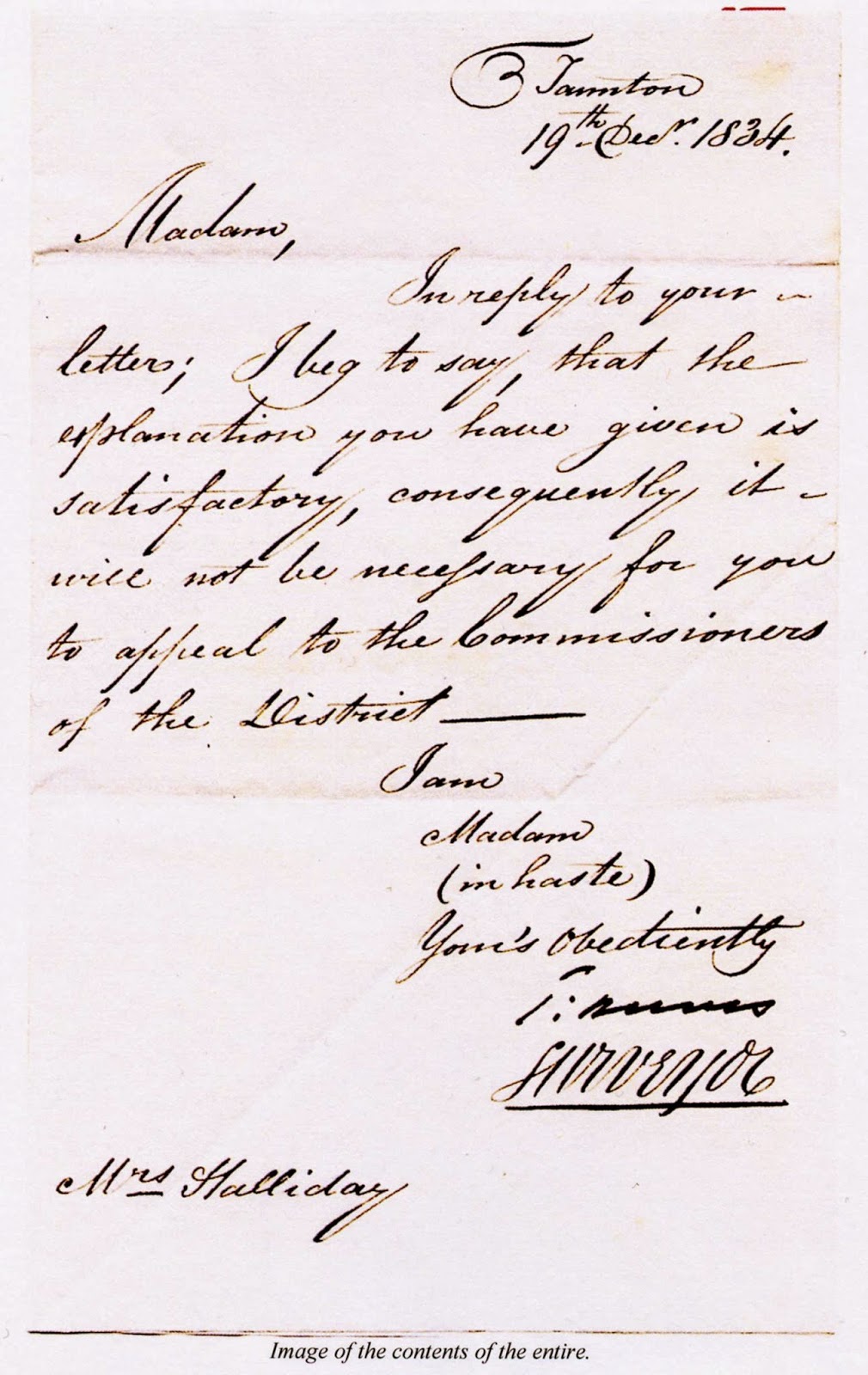 It is all consistent - except that I believe the boxed "No.1" handstamp went out of use at Gore Inn, near Bishops Lydeard, in 1828 when the Taunton Penny Posts were reorganised and Bishops Lydeard was given the unboxed "No.2" handstamp.

Did the boxed handstamp carry on being used ?  Was it perhaps used by mistake ??

The handstamp is slightly different from earlier ones, but this is probably because it was not struck straight (the left hand box edge is angled away from the right hand one). 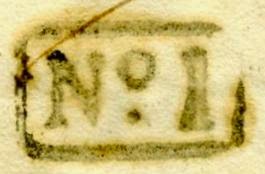 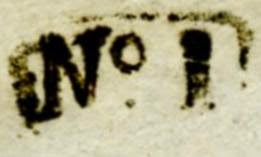 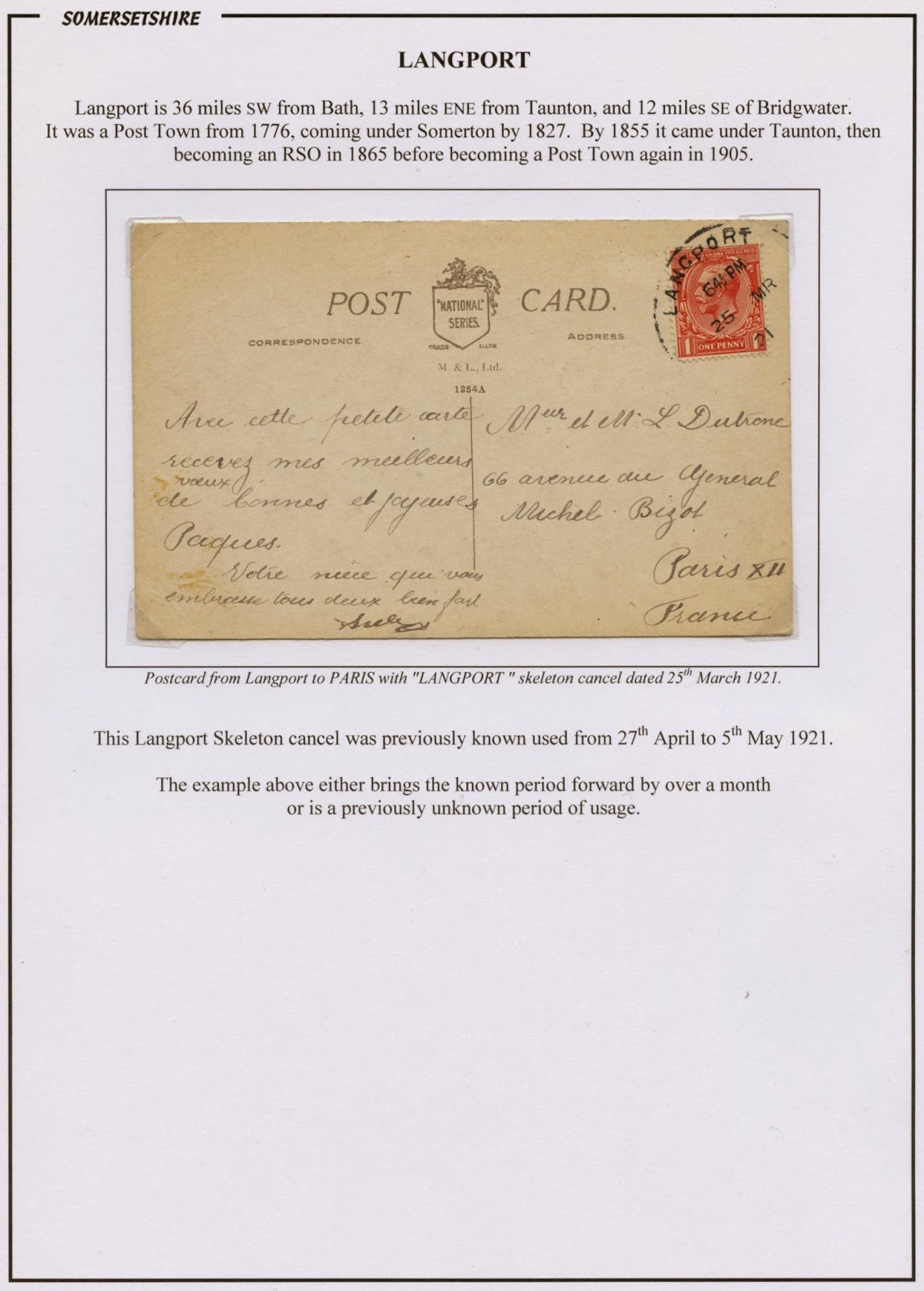 Is this a new example of the skeleton or is it already known ?  Does anyone have a Langport cancel of any kind from 26th March to 26th April to determine whether the skeleton was in use all this time or not ?
Posted by Leamphil at 07:00 No comments:

It's nice to get postcards with nice postmarks and pictures of the place that the postmark comes from - here is one from Crewkerne showing Station Road ... 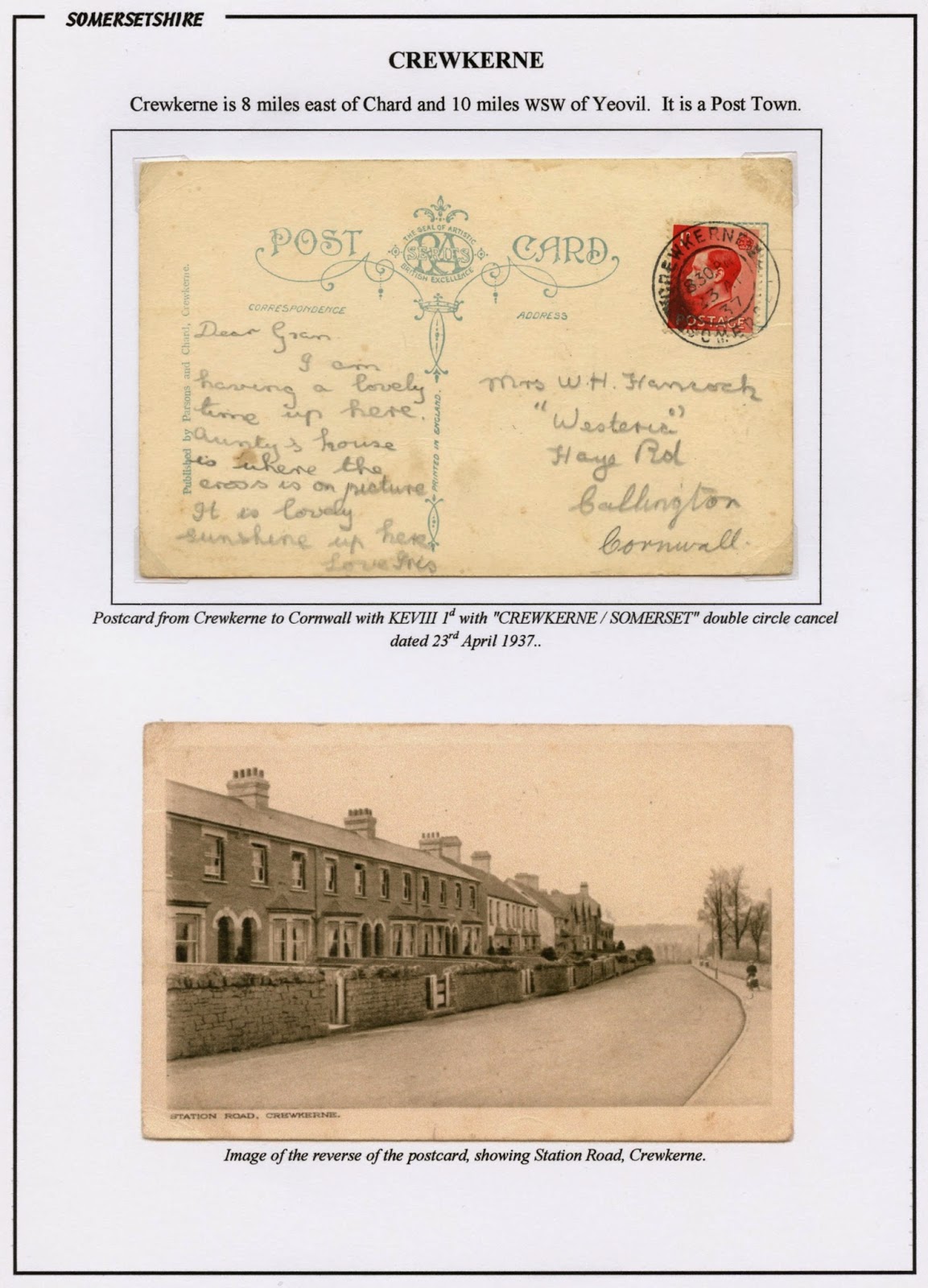 here is one from Highbridge ... 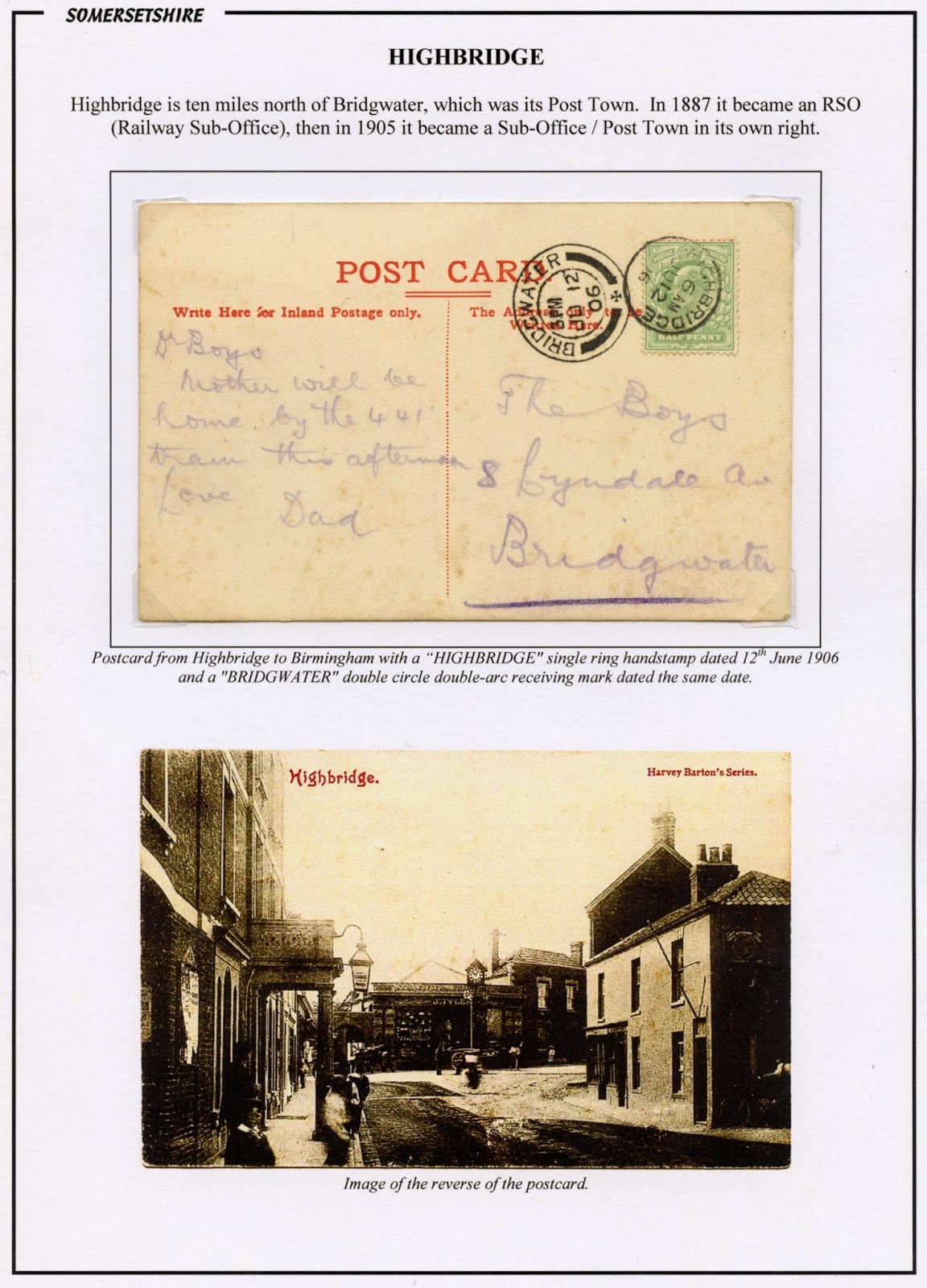 ... and one from Norton Fitzwarren. 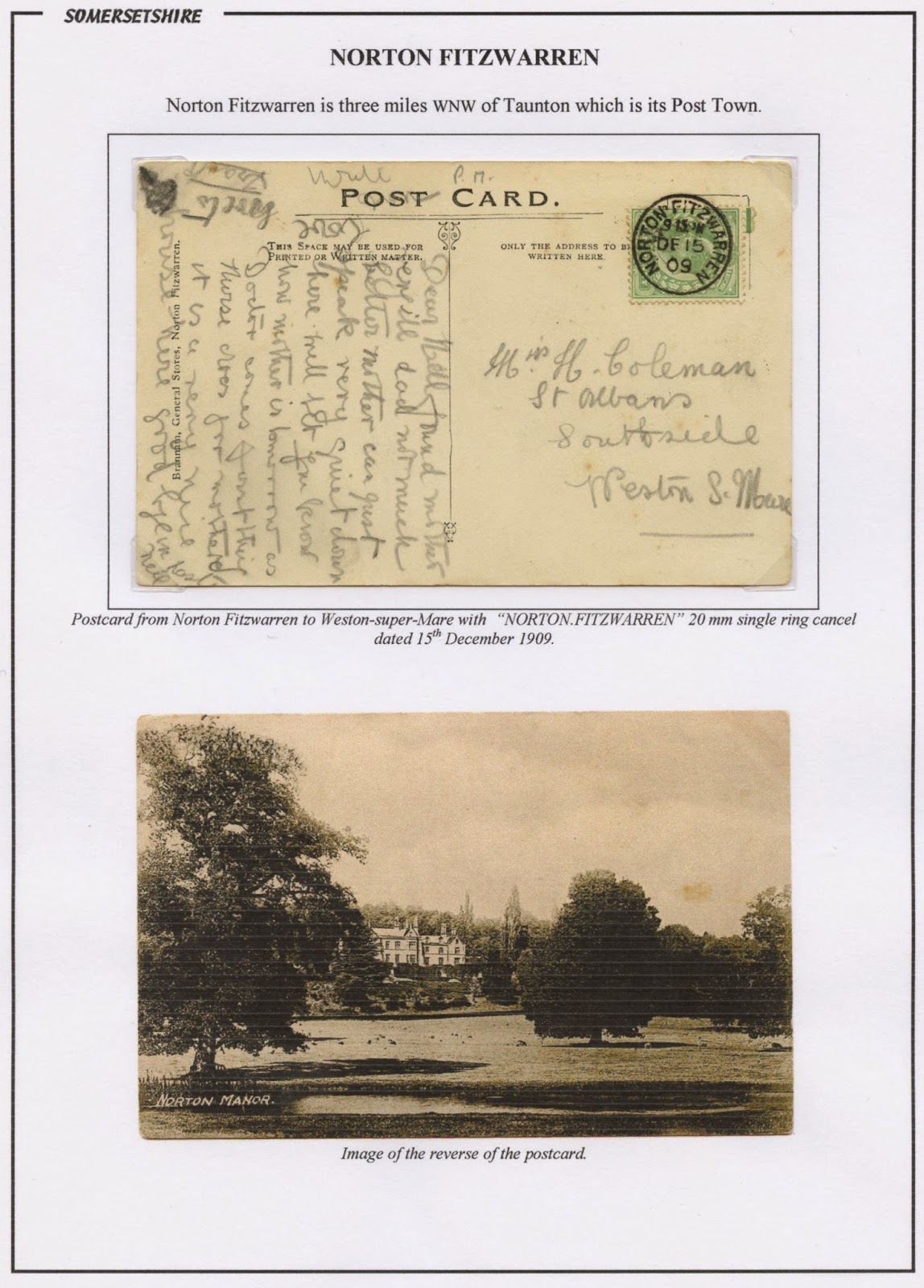 With the outbreak of the Second World War, the British Army were in desperate need of modern logistics facilities, positioned with easy access to the major port and transport facilities, yet away from the major Nazi-Luftwaffe targets.

Norton Fitzwarren is on the former Bristol and Exeter Railway mainline, which was operated and then taken over by the GWR in 1890. The station became an important junction station, with access within an hour to:

Resultantly, the station for a relatively small village was quite extensive, having two island platforms creating four platforms. Thanks also to the extensive local silk mills, there were also extensive existing freight handling facilities within the Fairwater Yard, a large regional freight yard located south of the mainline.
Posted by Leamphil at 07:00 No comments:

Here are a couple of items from Frome, starting with a nice early handstamp (undated though must come from 1760-1778). 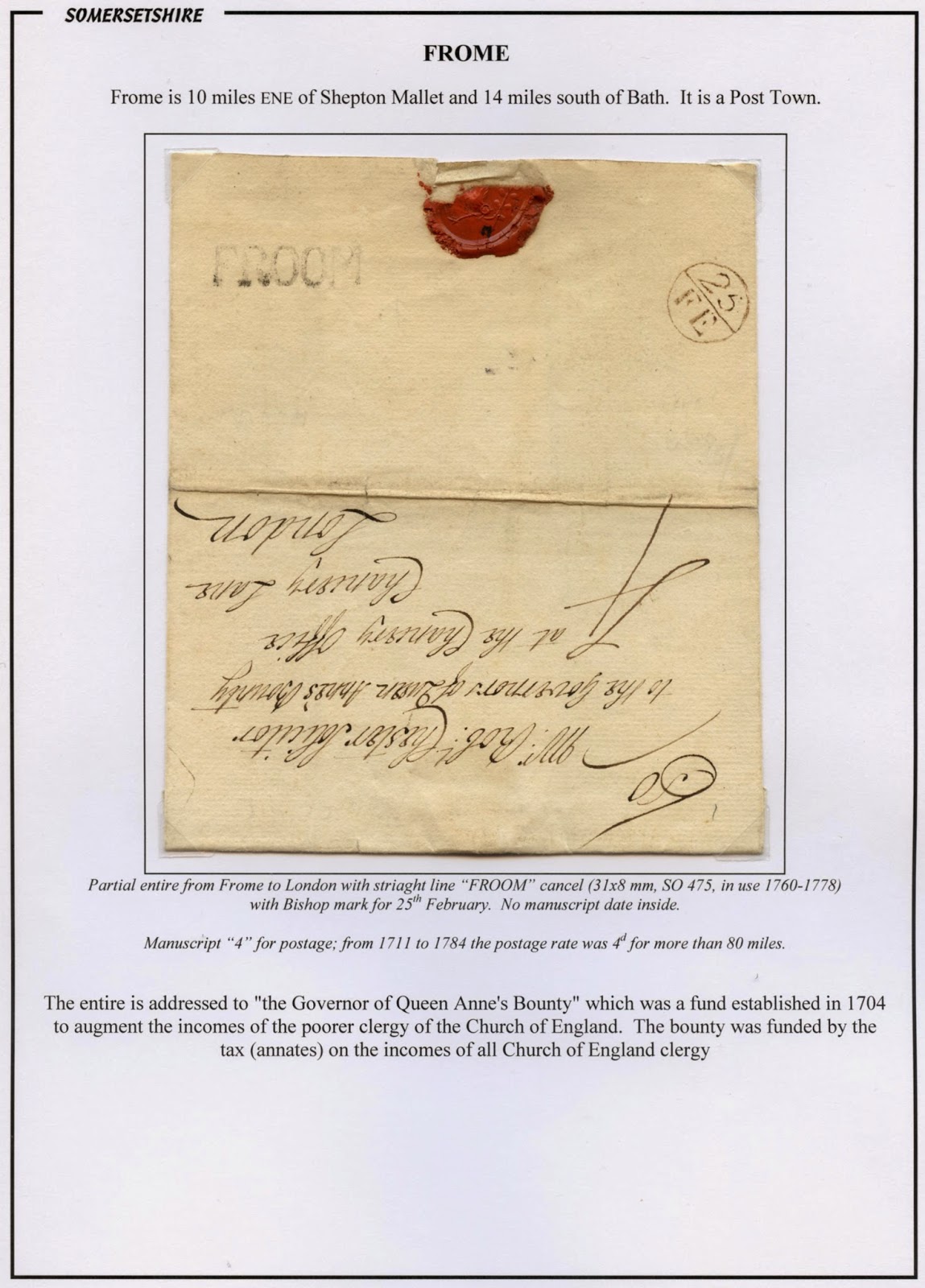 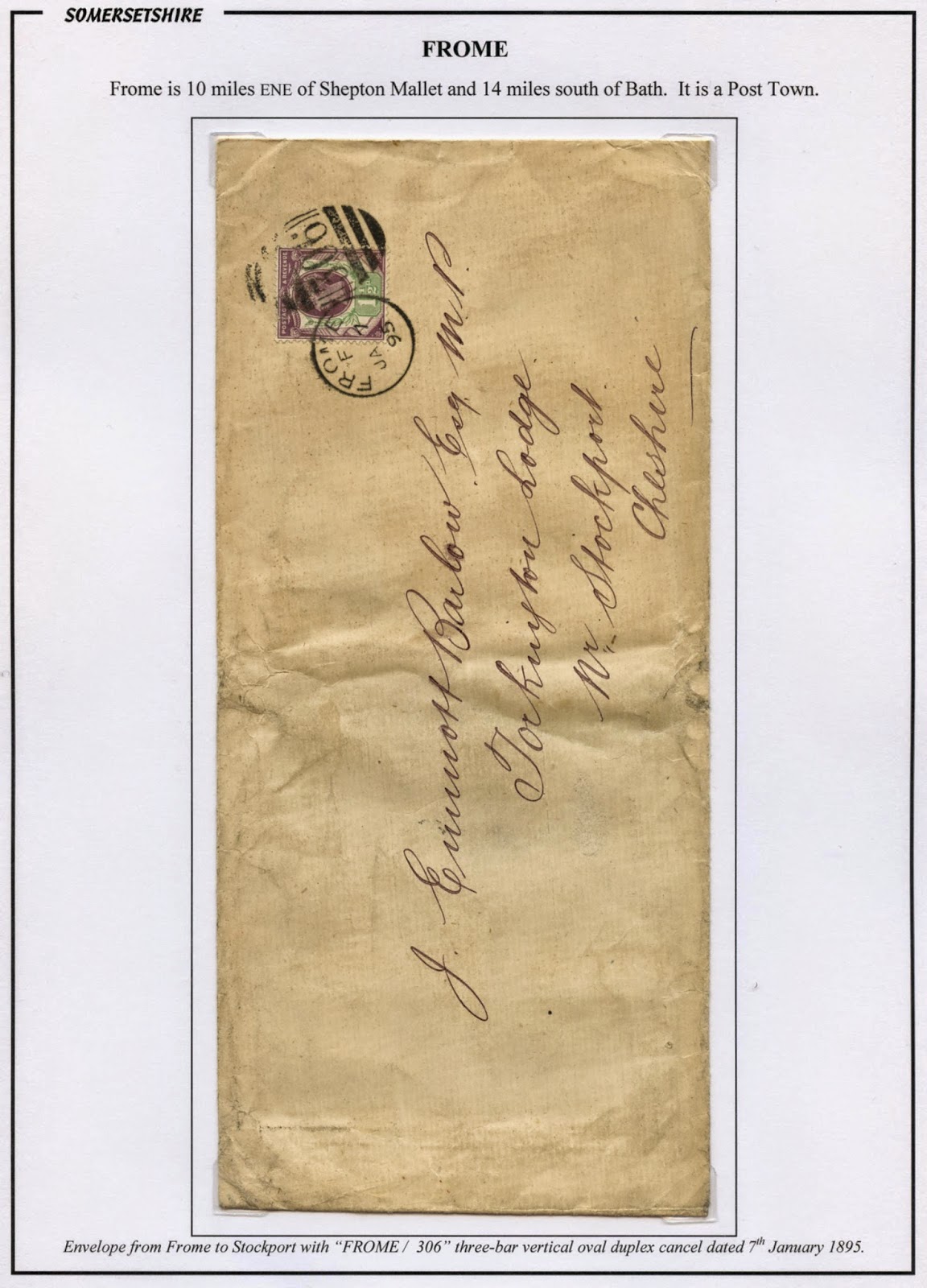 And here are a couple of fairly ordinary items from Dunster, starting with a receiving mark without a year (it looks as if the handstamp did not have a year). 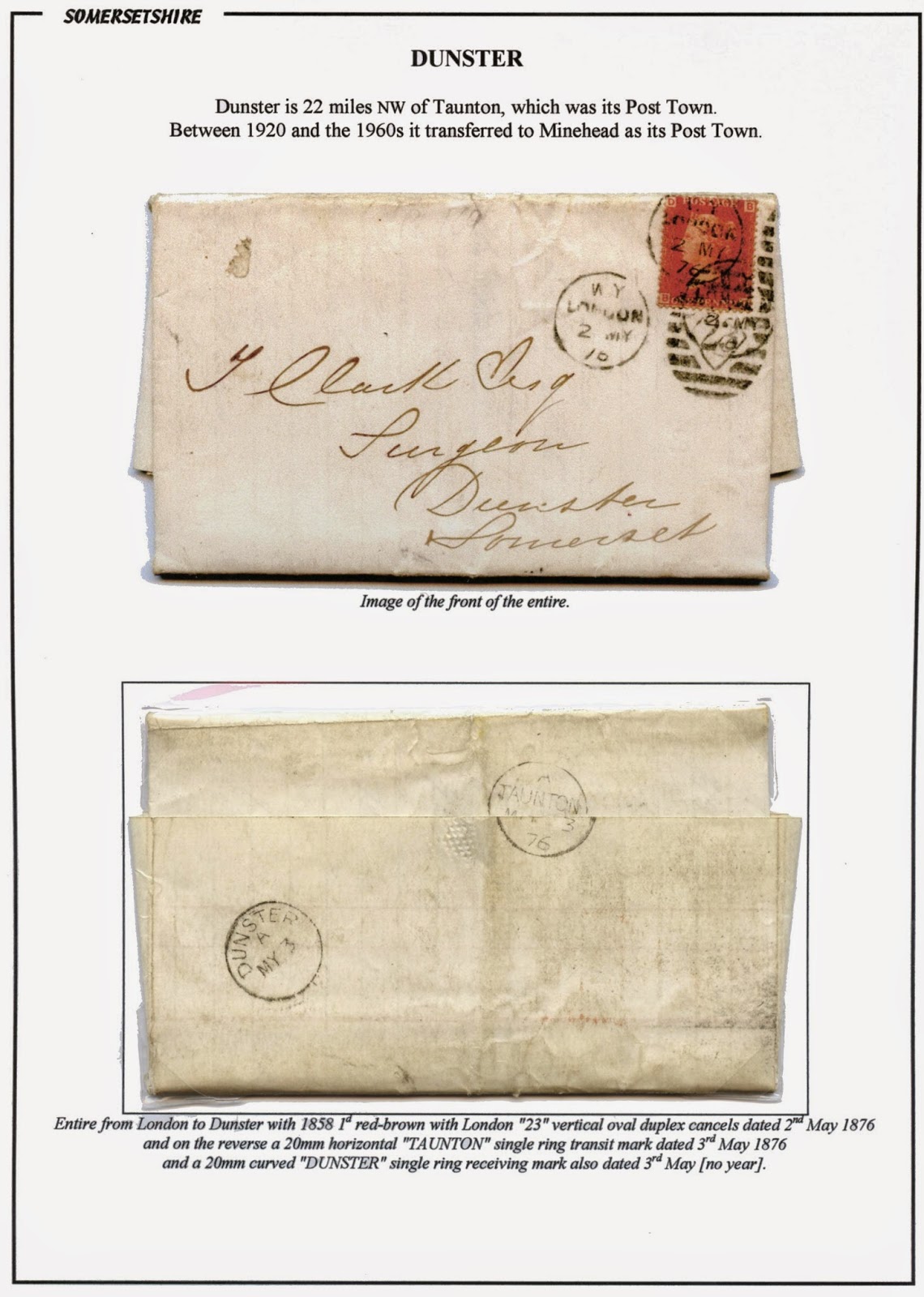 And finally a Registered envelope from Frome, with partial "DUNSTER / TAUNTON" cancels from 1918. 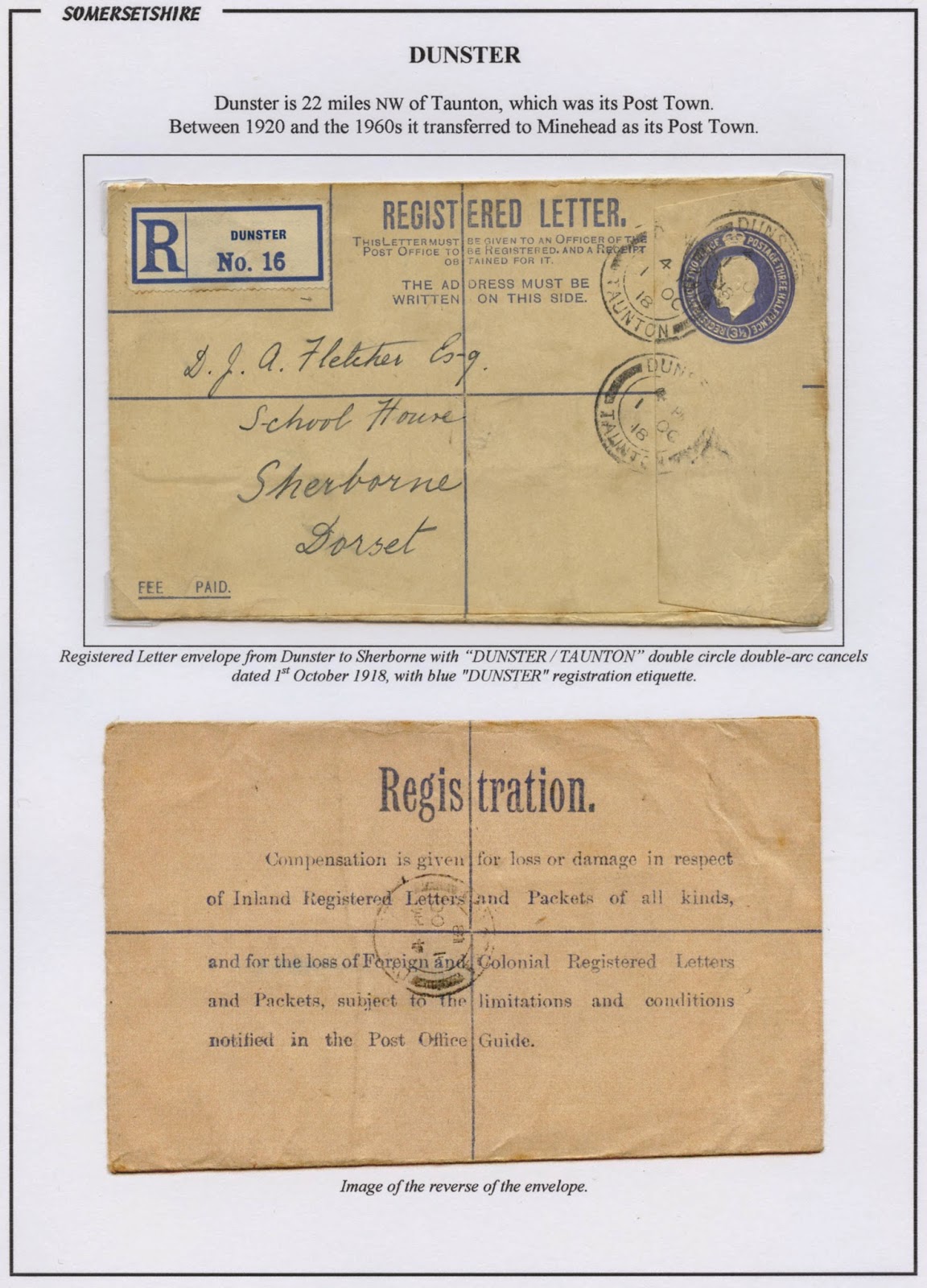 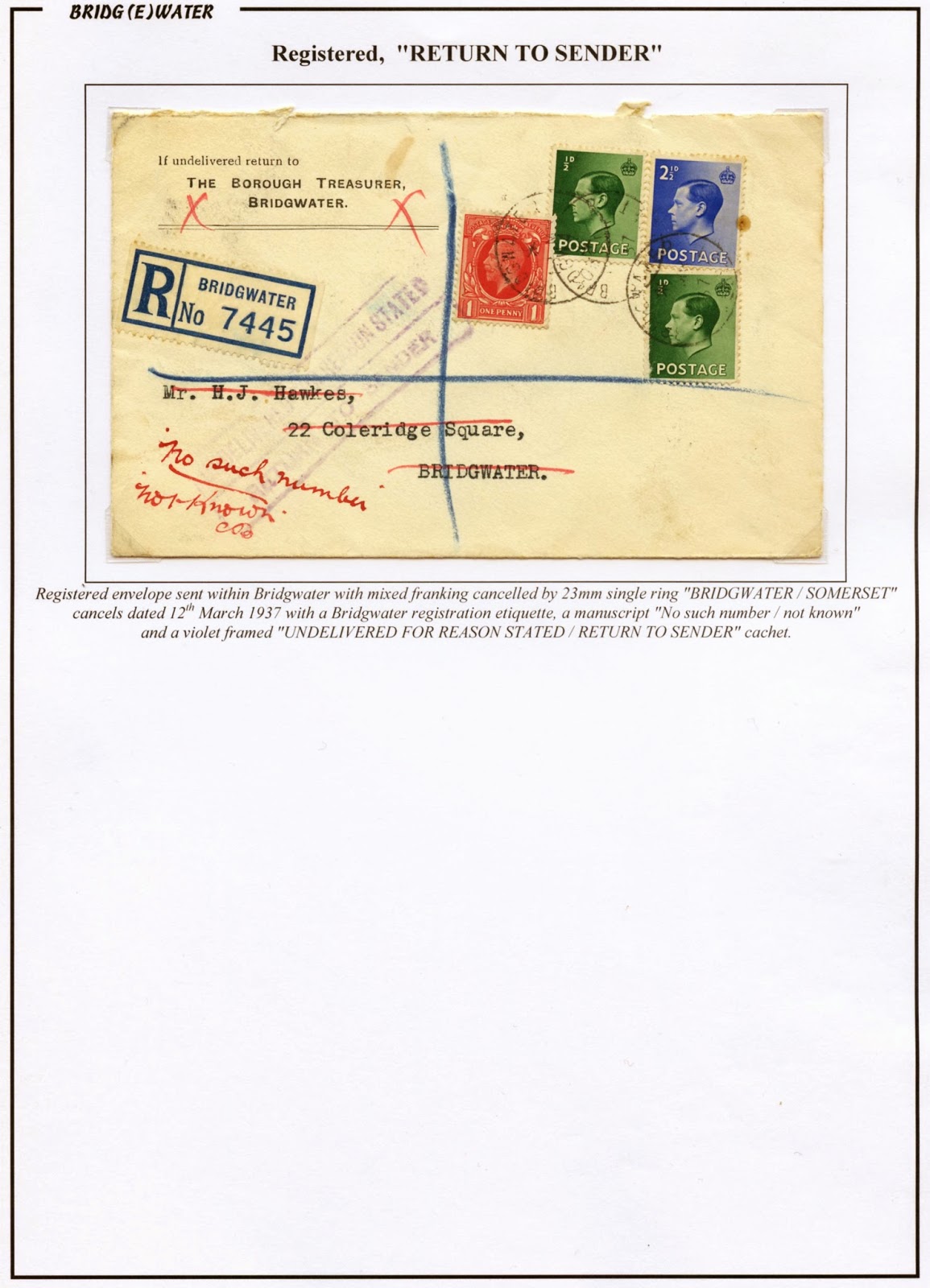 Then an item of printed matter with a "Universal" machine cancel from 1951. 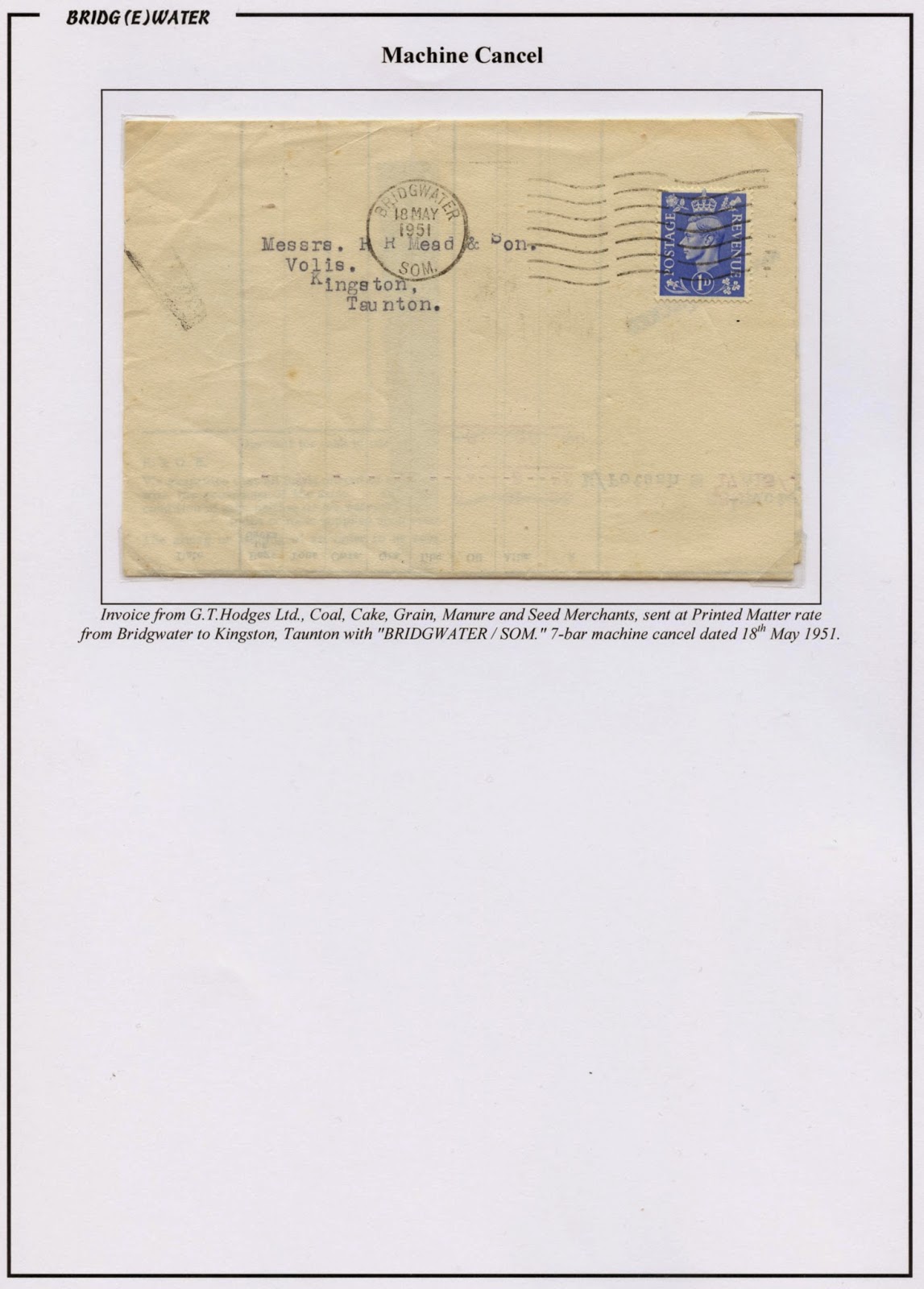 Next a highly philatelic Paquebot item from 1982. 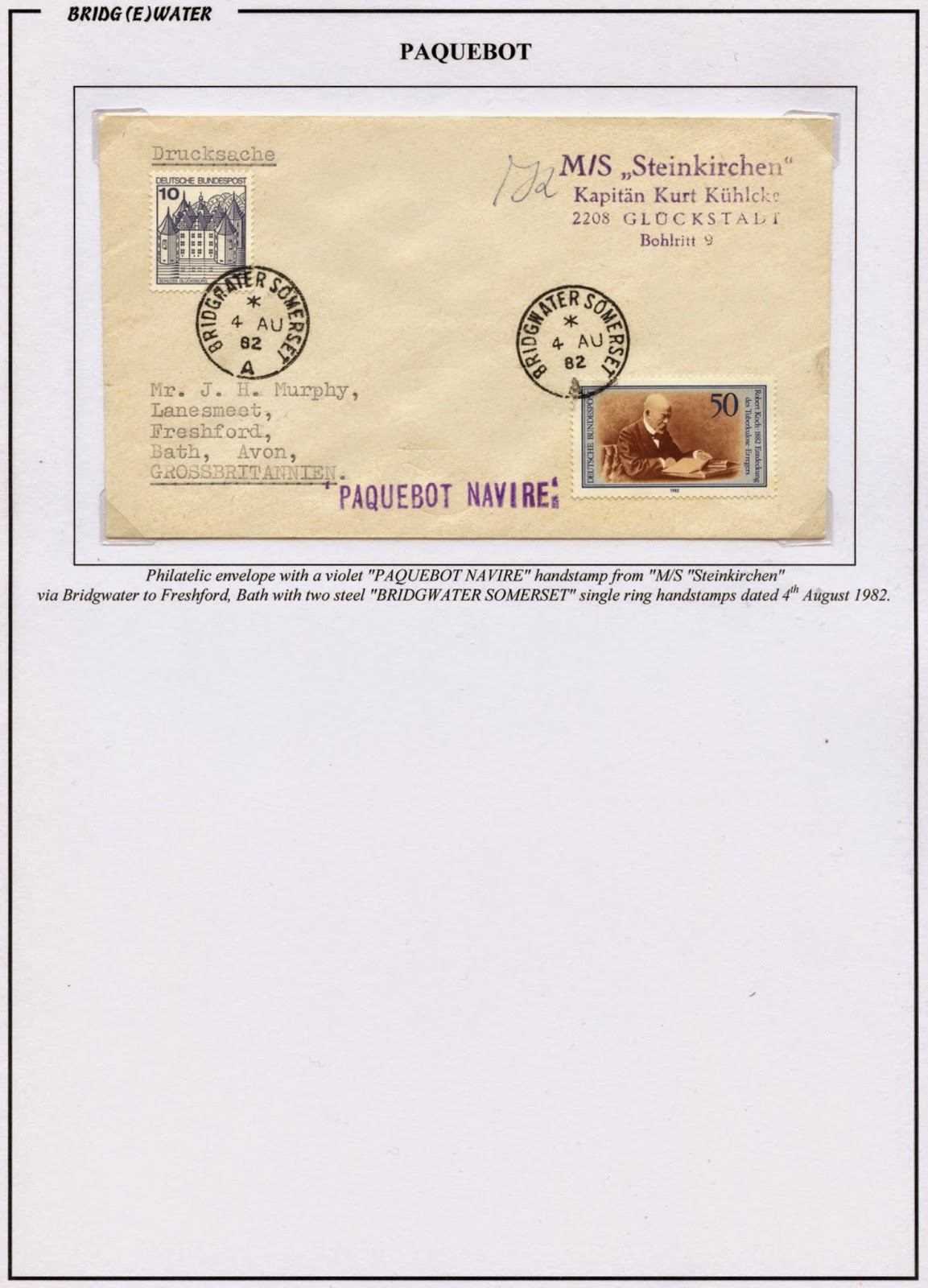 And finally an item of meter mail which was incorrectly dated. 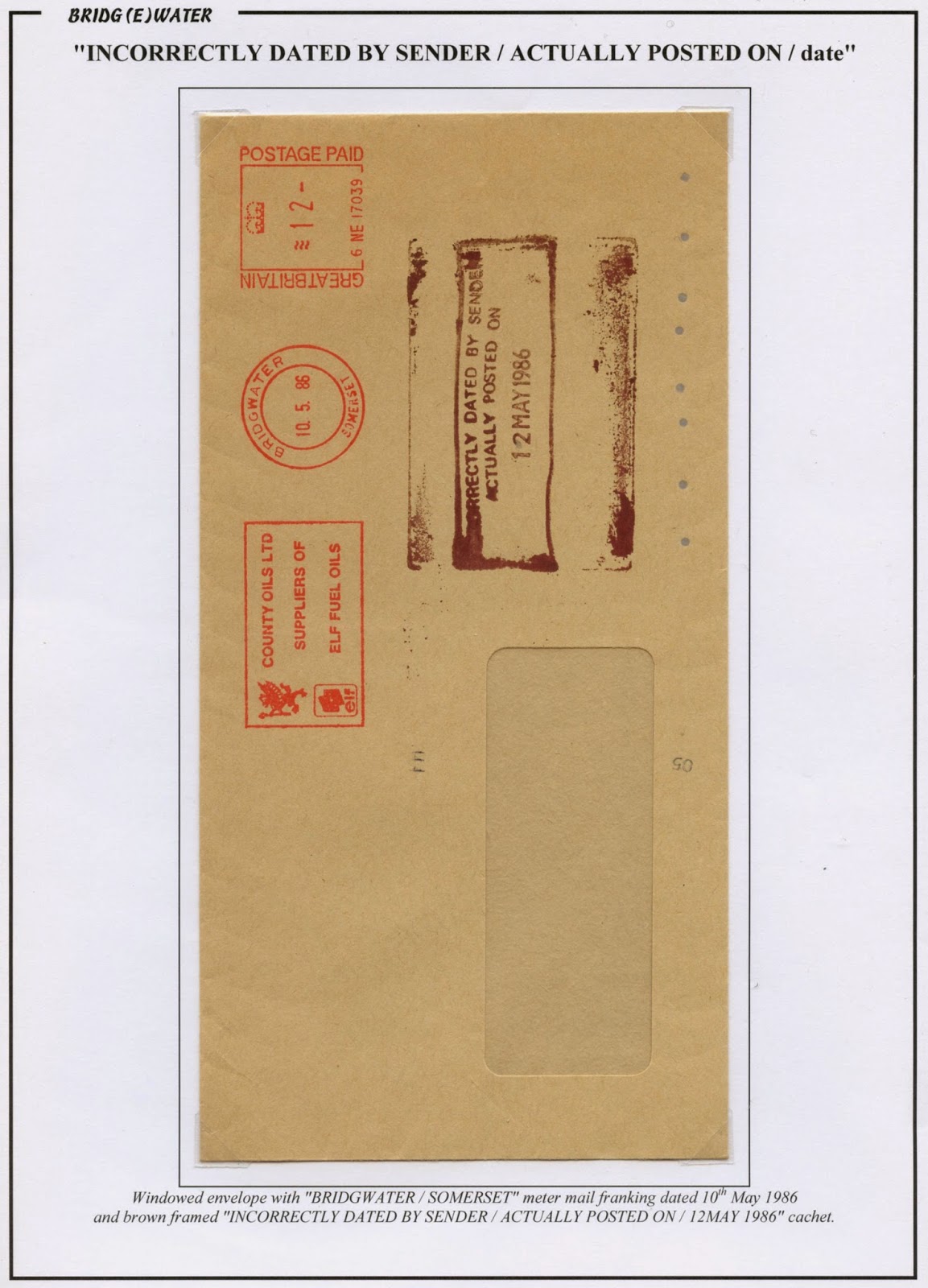