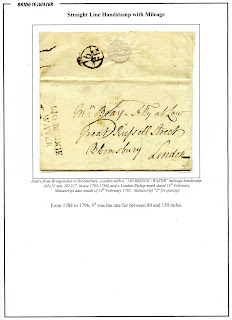 I do not currently have examples of the “115 CASTLE / CAREY”, “144 CHARD” or “141 ILMIN / STER” marks, so cannot illustrate them here – please do send me an image if you have a copy of any of these marks (or let me know if you have a copy you would like to dispose of).

By the end of the 18th century the Postmaster General had instructed John Cary, a map-maker, to prepare a survey of all the principal roads in the country under the supervision of the Superintendent of Mail Coaches. This was used in the issue of the second series of mileage stamps from 1801.


As can be seen from the table above, extracted from the Somerset County Catalogue, while the majority of the marks (9) are of the form 'mileage town', the remainder (6) are two line marks of the form 'town / mileage'.

Despite what it currently says on the Postal Museum website, the 1784 mileage marks were not introduced because the postal rates of 1784 charged based on the total distance that the mail travelled – that did not happen until the introduction of the 1796 rates on 5th January 1797.  In 1784 postal charges were still based on the postal charge to London plus the postal charge onwards from London as two separate charges.  The postal rate change in January 1797, along with the survey of principal roads by John Cary, may well have been instrumental in causing the Post Office to re-introduce mileage marks in 1801.

The first mark above, “113 BATH” is currently the earliest known usage of an English mileage mark, on 14th September 1784 (again correcting the information currently on the Postal Museum website). 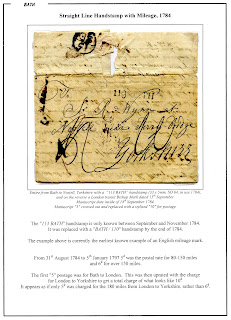 I have already posted on the "BATH / 110" handstamps here.

The sheet below has an example of the Drimpton UDC in blue (one of two currently recorded examples, the only one in blue) from May 1853.  The UDC was issued in June 1852 under Crewkerne.  By 1856 Drimpton was under Bridport, but the 1853 cover below appears to have come under Beaminster, with a Beaminster barred numeral cancel and double-arc dated handstamp on the reverse. 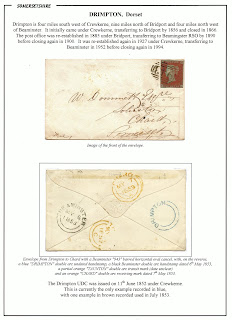 Buckhorn Weston in Dorset initially came under Bath (30 miles to its north) before transferring to Wincanton (4 miles north west), and then to Gillingham (4 miles east) in Dorset. 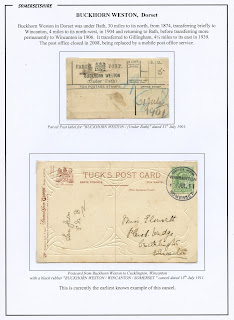 Here are two items of mail that were conveyed by the Great Western Railway before going in the General Post.  As such they paid an additional fee for conveyance by the railway of double the general post rate, hence the 2d charge for the railway with the 1d charge for the normal post.

This first item is from 1894, and has post office cancels (3-bar vertical oval duplex cancels) on both the railway and the normal postage stamp. 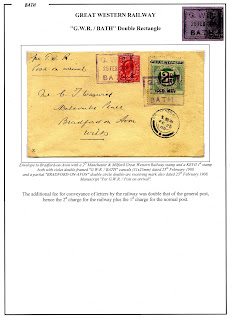 The item below is a piece from a parcel from Bath to Westbury in June 1904, with a "BATH" target cancel, a Parcel Post Label and a framed "COACH / ROAD BORNE" cachet. 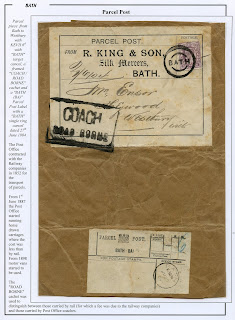 In 1852 the Post Office contracted with the railway companies for the transport of mail by rail.  In 1887 the Post Office started running horse-drawn carriages where the cost was less than by rail (the first service was from London to Brighton).  From 1898 motor vans started to be used.

The "COACH / ROAD BORNE" cachet was used to distinguish between those parcels carried by rail (for which a fee was due to the rail companies) and those carried by Post Office coaches.
Posted by Leamphil at 07:00 No comments:

East Anstey in Devon is four miles west of Dulverton and 13 miles north of Tiverton.  A post office is known from 1909 under Dulverton, where it remained until 1932 when it transferred to Tiverton.  The post office closed in 2000. 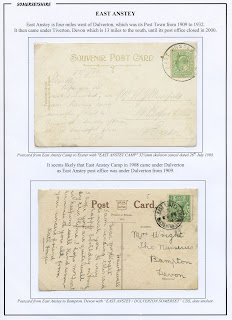 The envelope below, addressed to Milborne Port, Somerset, has a cachet correcting the postal address. 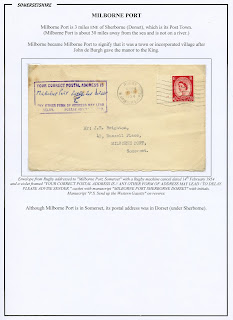 Although Milborne Port is in Somerset, its correct postal address is Dorset (under Sherborne).
Posted by Leamphil at 07:00 No comments:

A Receiving House at Queen Camel was established in 1828 in the Sherborne Penny Post, and it was issued with a boxed "No.3" handstamp.  The wrapper below went from Queen Camel to Sherborne in 1832. 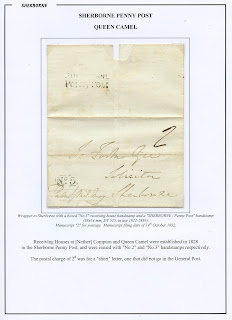