Burnham was in the Bridgwater Penny Post from 1835.  It is thought that it may have had the "No.7" Receiving House cancel - the example from my earlier post may show this as the entire below was written in Burnham, although it then went via Cross and Wells rather than directly to Bridgwater.  Bridgwater was Burnham's Post Town until 1887.

Here is a fairly faint UDC handstamp used in 1843, of the form "BURNHAM-SOMST". An earlier UDC with just "BURNHAM" in a serif font was registered in 1836 but has not been seen outside of the Post Office Archives. 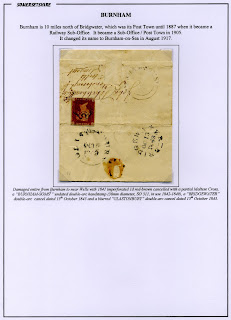 A double-arc dated "BURNHAM" cancel was registered in September 1849. 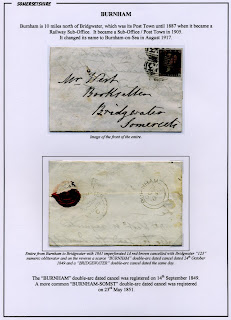 Skipping over a number of cancels that I don't have, we eventually get to the squared circle cancel.  I've already posted up a couple of example here, but this is a nice clear example from 1900. 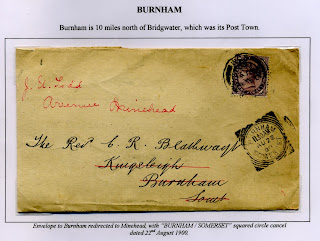 Email ThisBlogThis!Share to TwitterShare to FacebookShare to Pinterest
Labels: Burnham