In this final batch of UDC handstamps here are two examples from Washford, one in black and one in a very bright red. 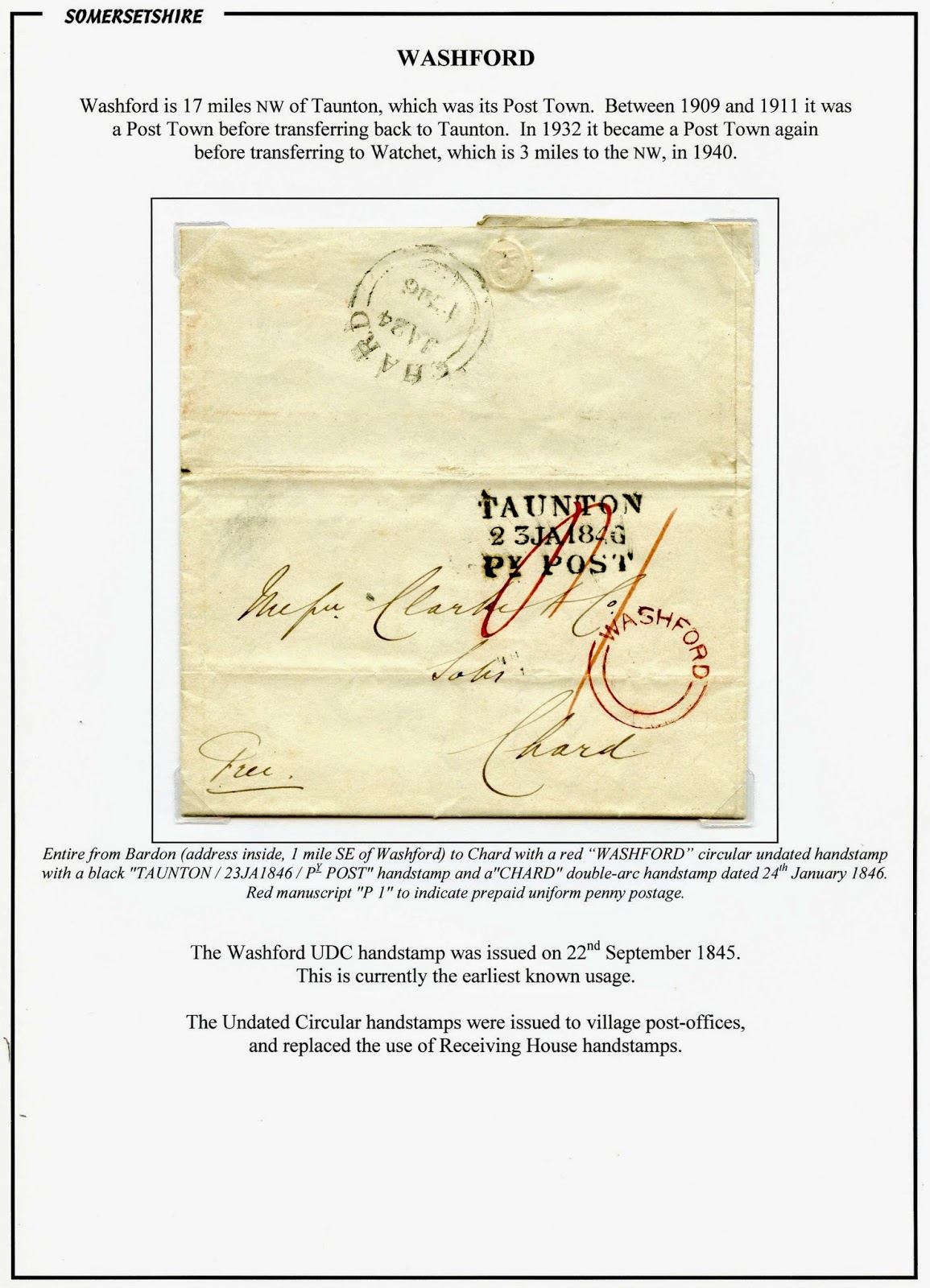 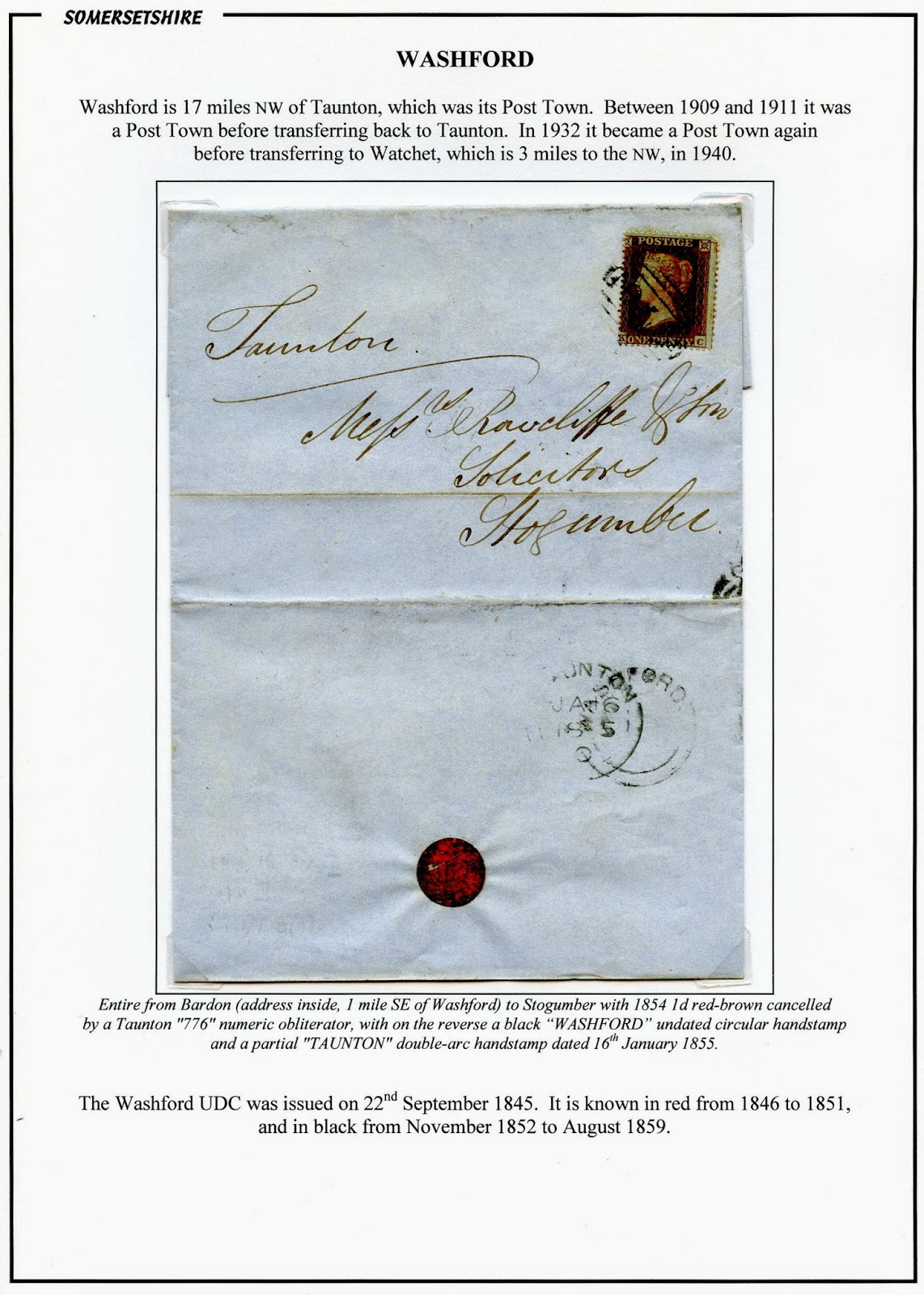 And lastly here are two UDC handstamps from Williton, one in red and one in black. Williton was issued with a numeric obliterator "777" in the 1844 list so perhaps would not have been expected to have a UDC handstamp. 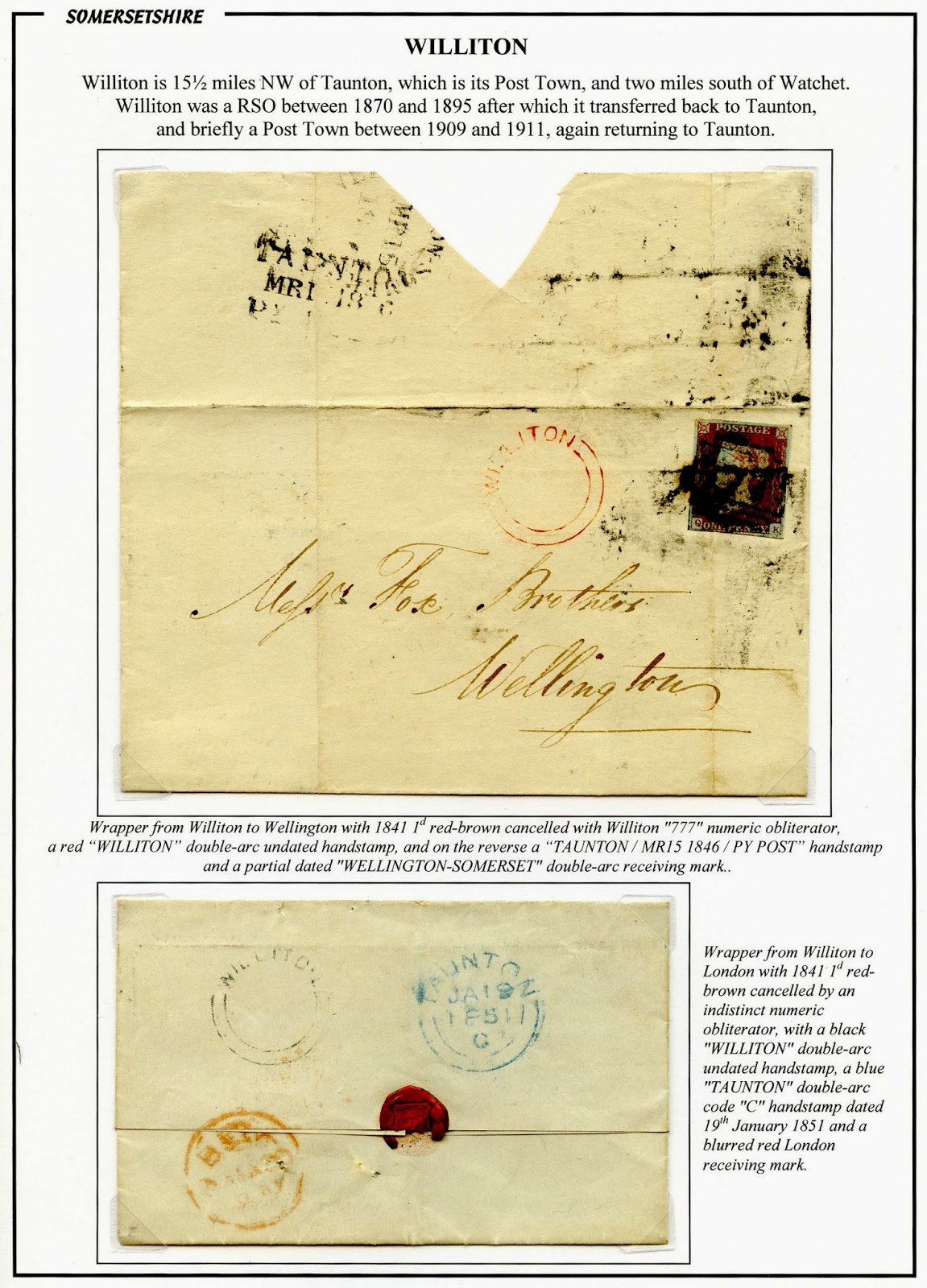 Here are two examples of the North-Curry UDC handstamp from 1846 and 1848. 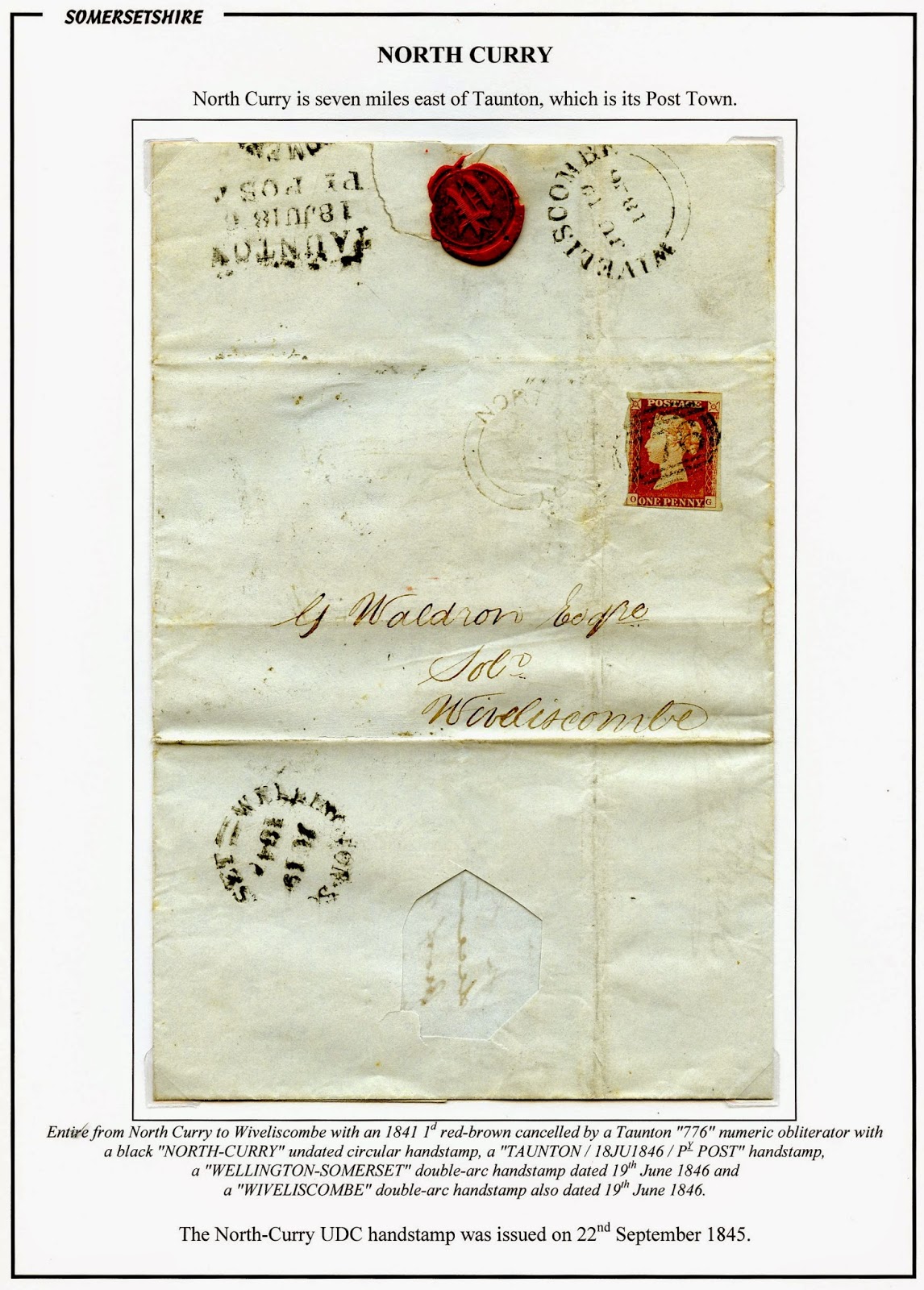 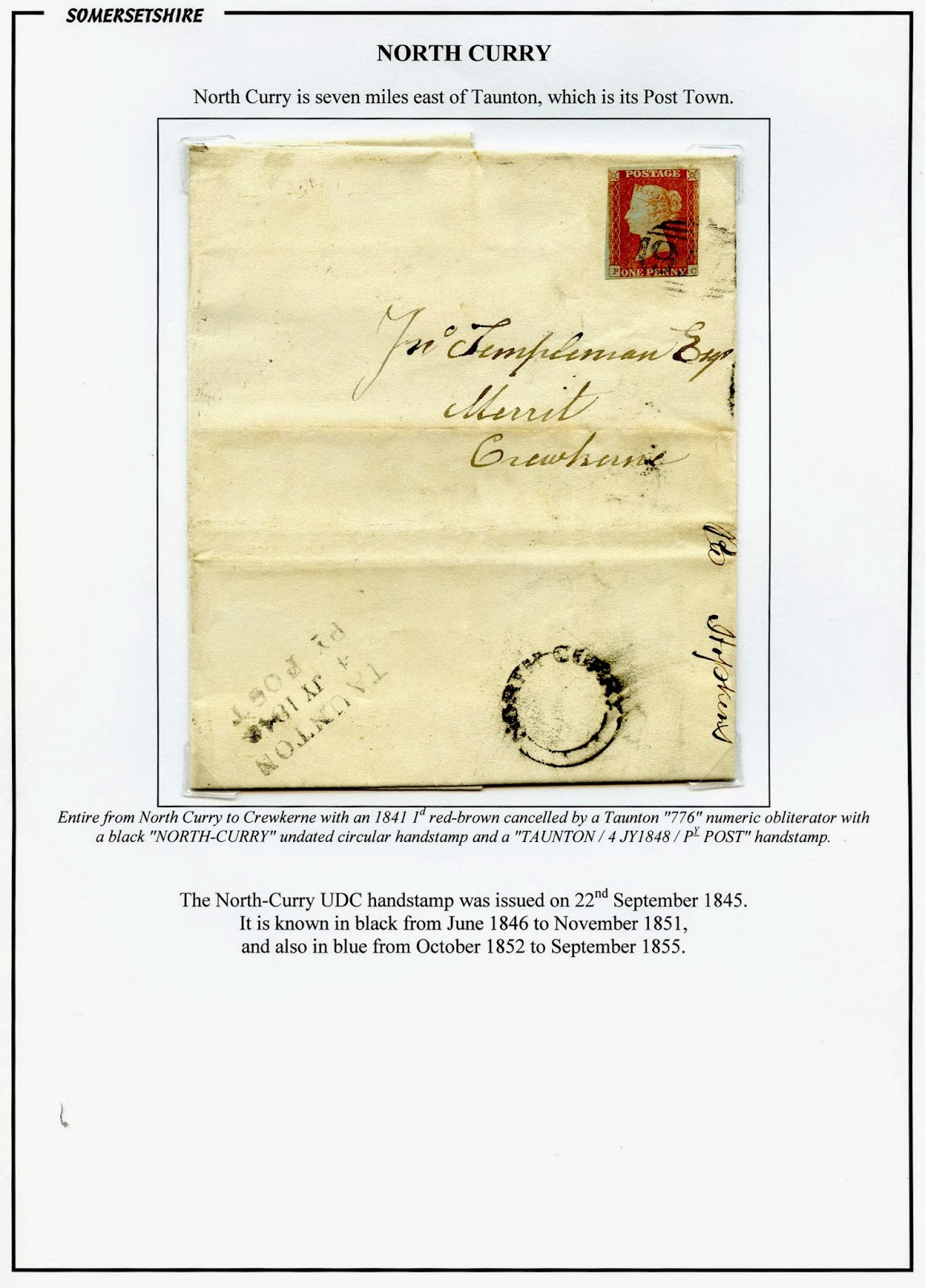 And two examples of the Stogumber UDC handstamp. 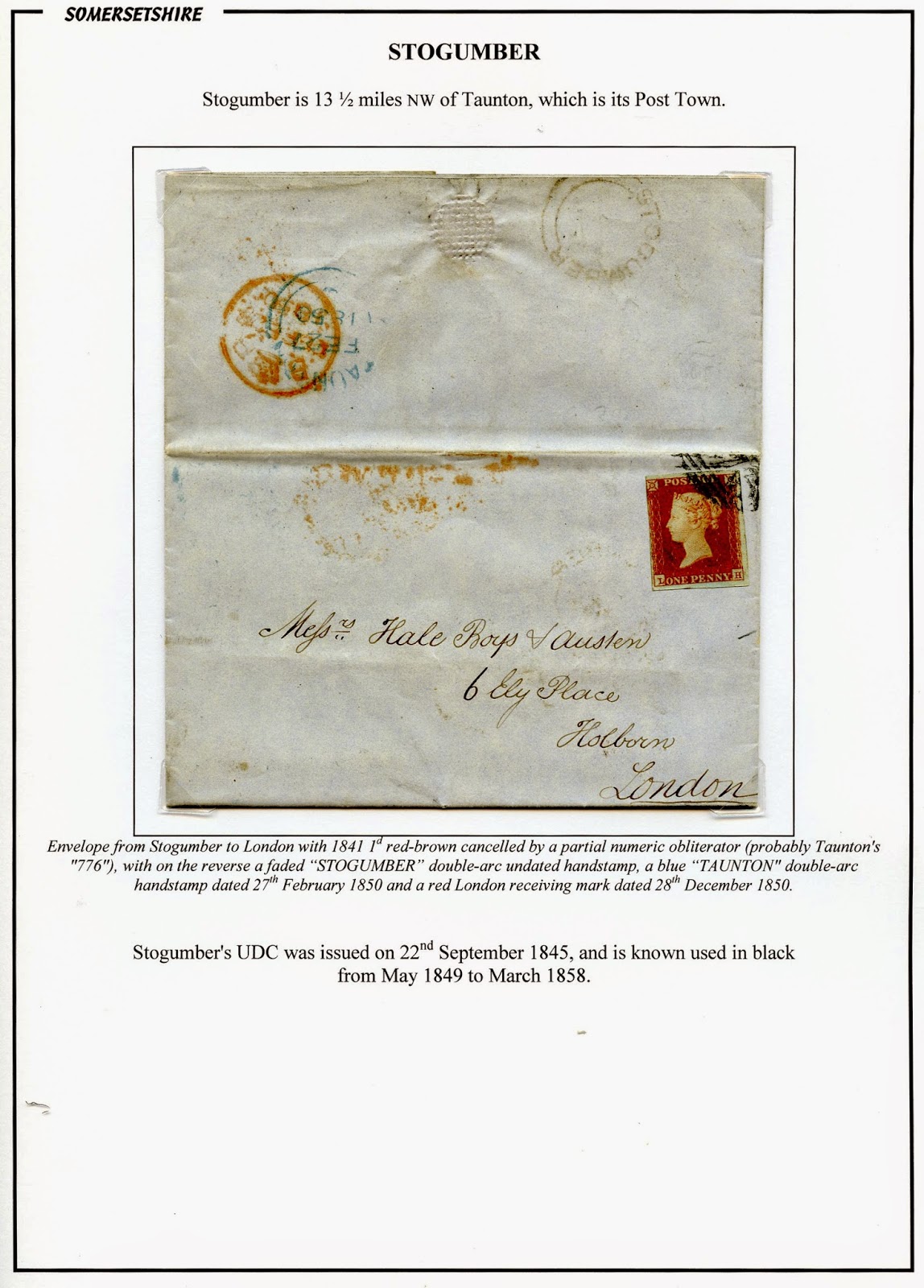 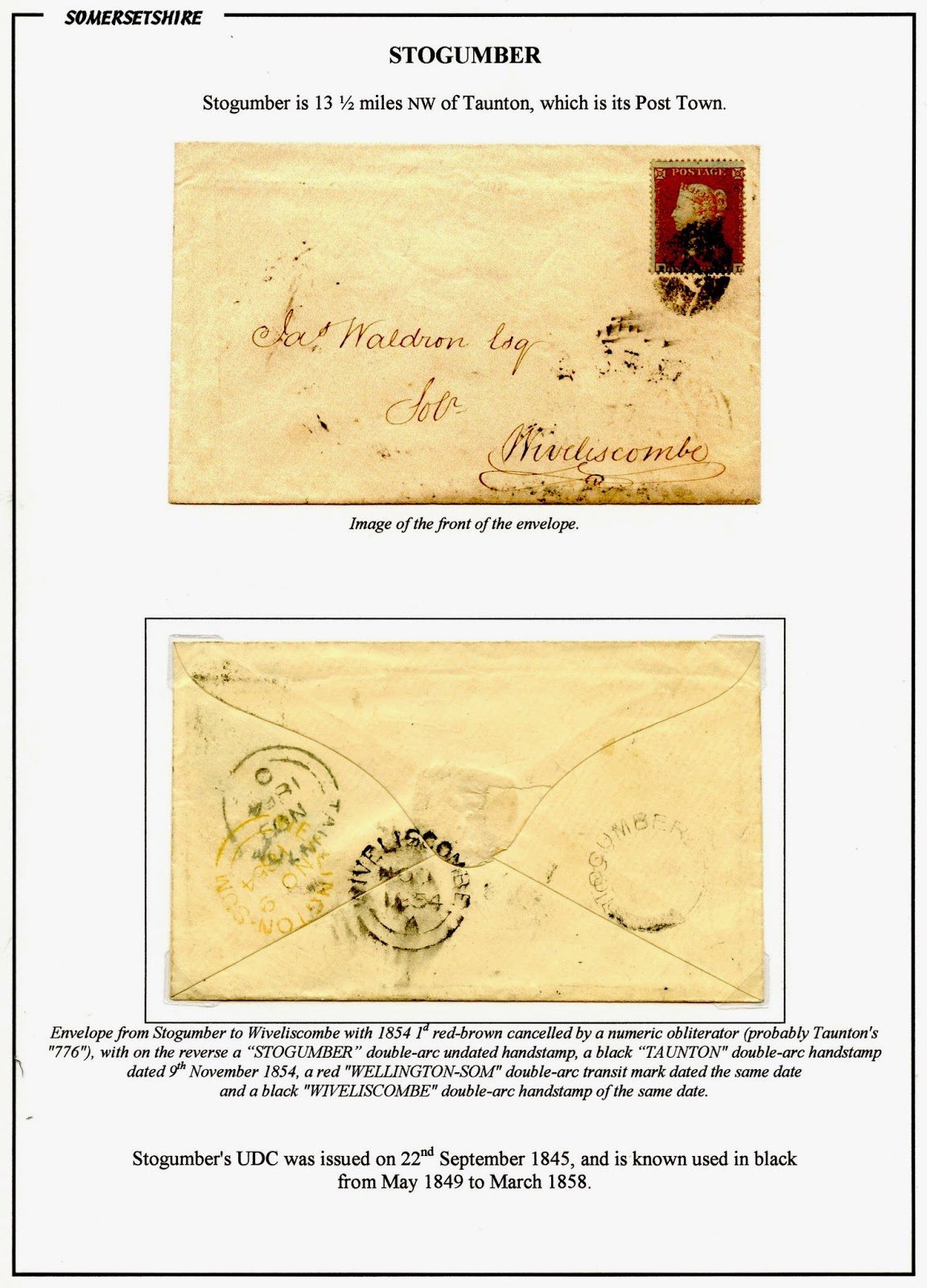 Carrying on with the UDCs, here is a late usage of the UDC handstamp for Cannington. 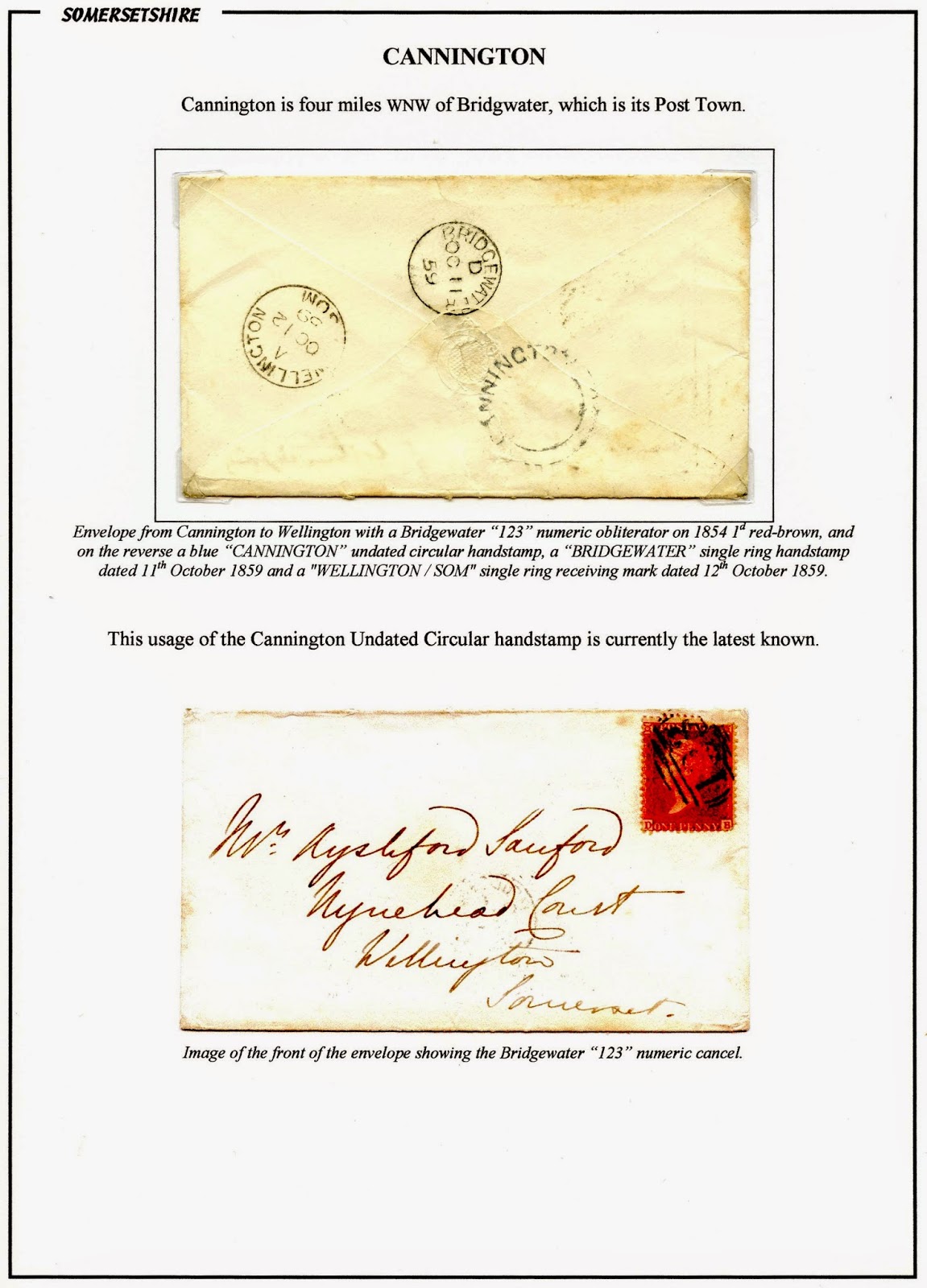 This is an example of the serif  "CURRY-RIVAL" UDC in blue, which is not recorded in the British County Catalogue.  It is also charged 2d postage due as it was not prepaid. 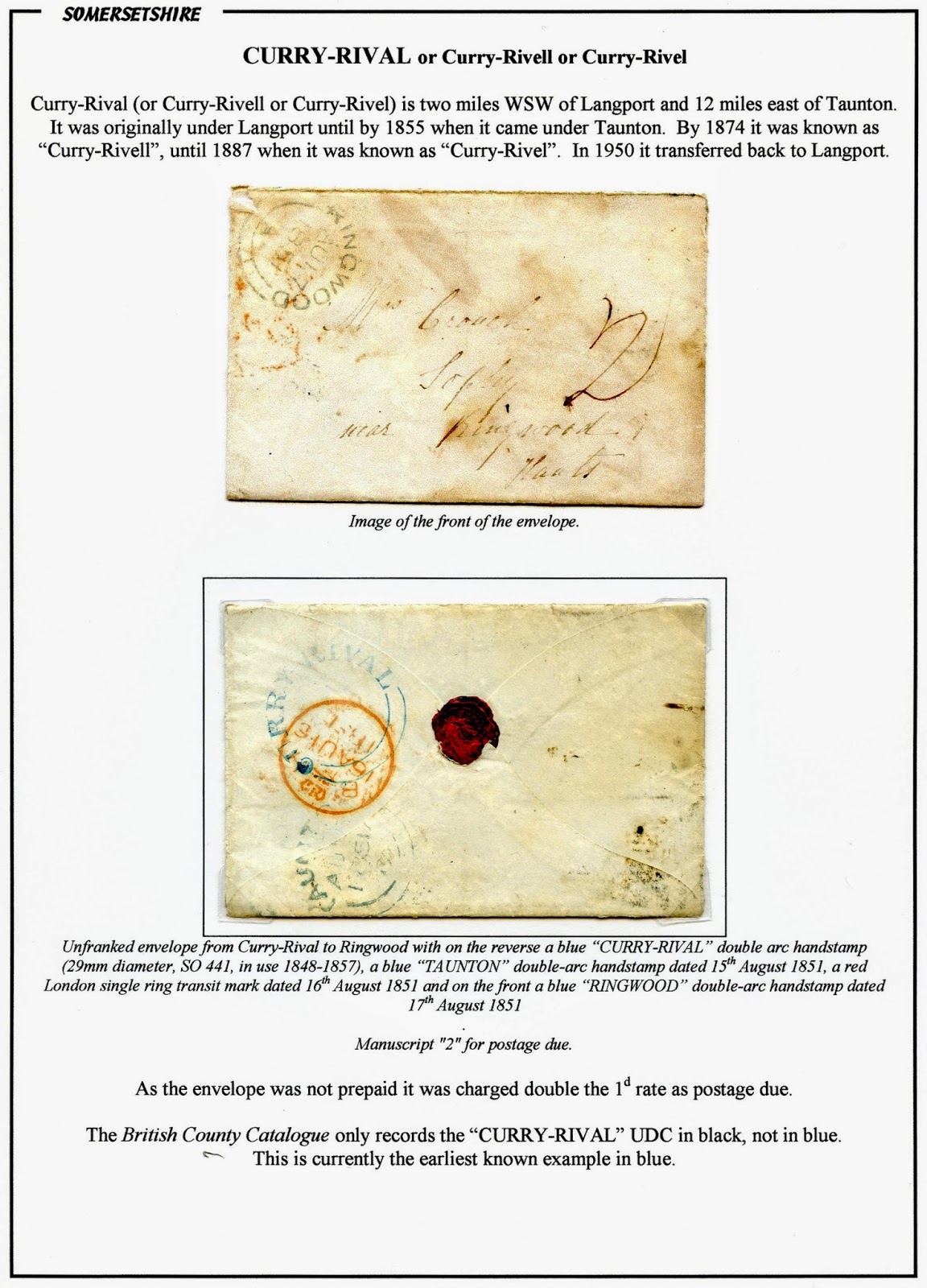 And finally here is what is currently the earliest known example of the UDC from Kingston [St. Mary]. 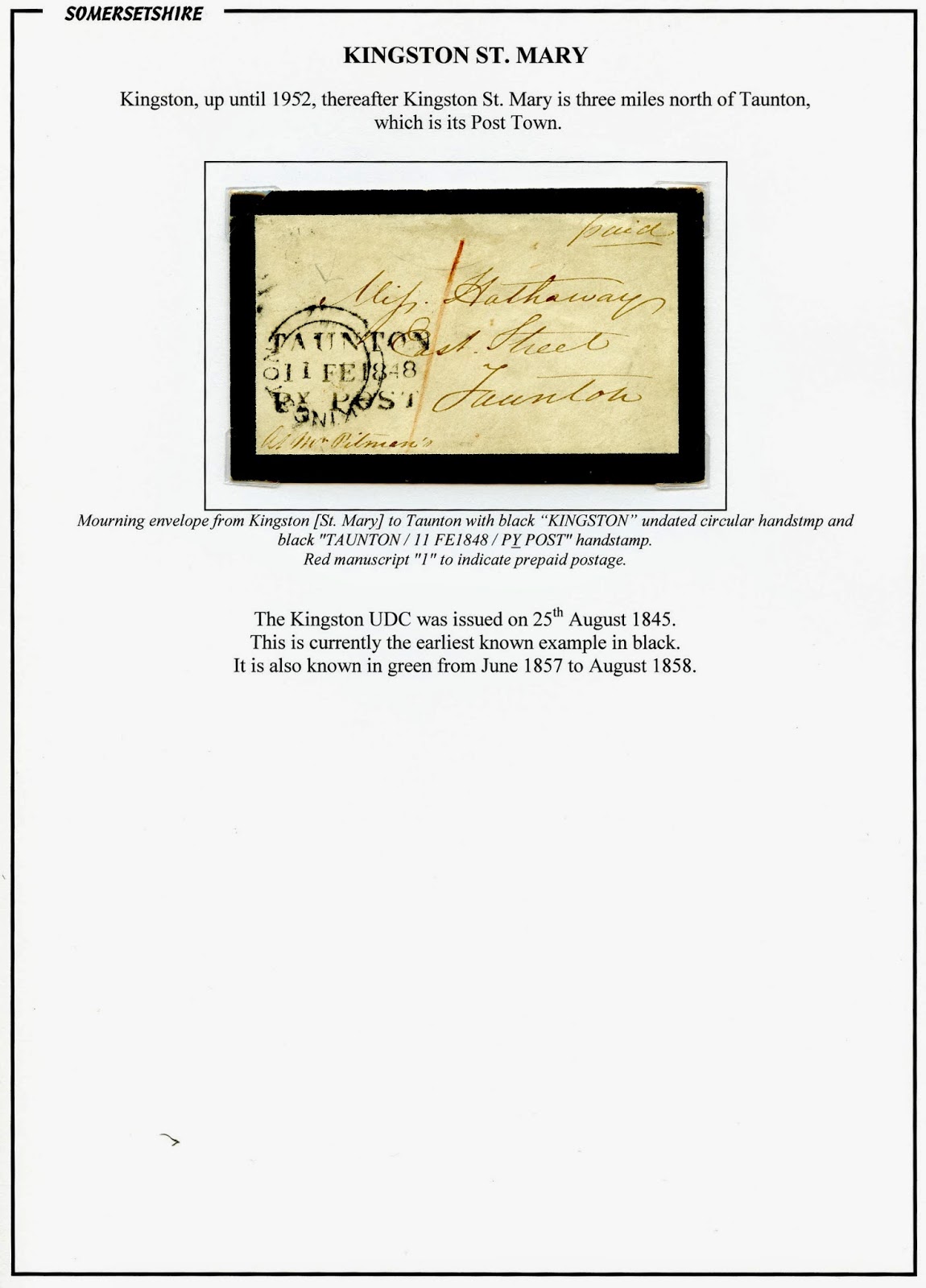 Before I get back to Taunton handstamps, the next few posts show some more Undated Circular handstamps (or UDCs), beginning with one in red for Bradford[-on-Tone] with a manuscript "2" for postage due as the entire was posted unpaid. 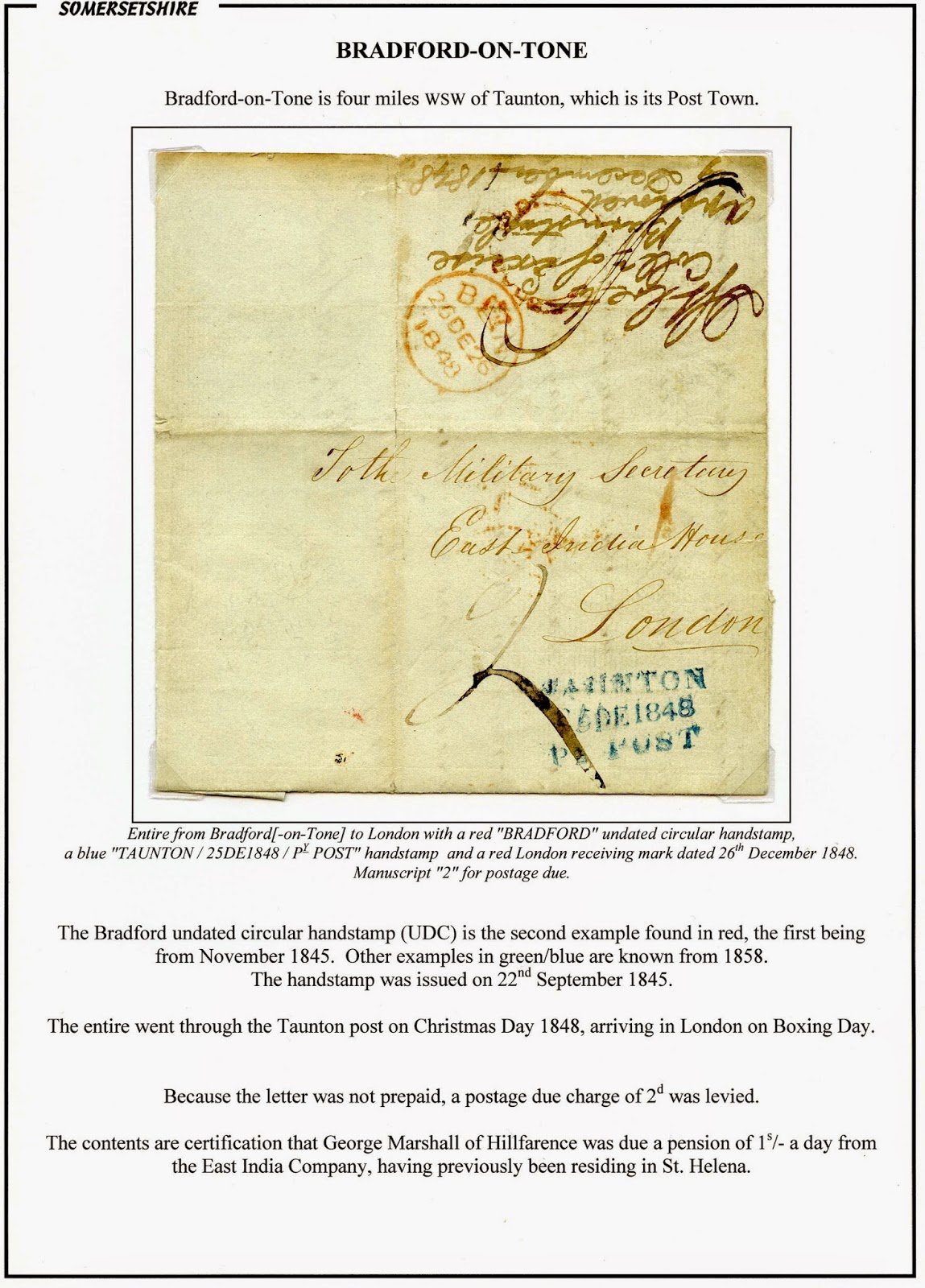 Next is an example of the UDC for Brompton Regis. 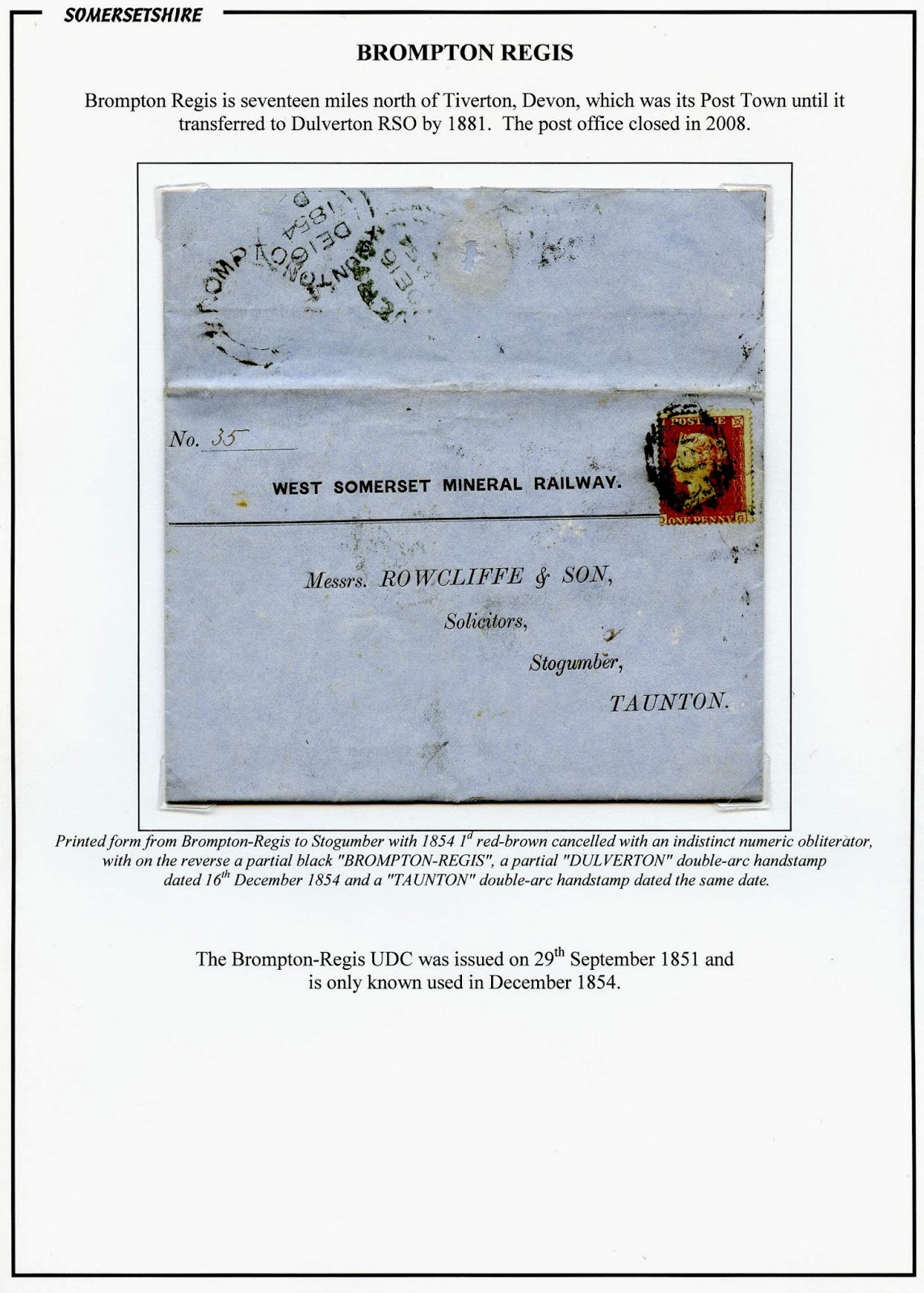 And finally in this post is an early example for Broomfield. 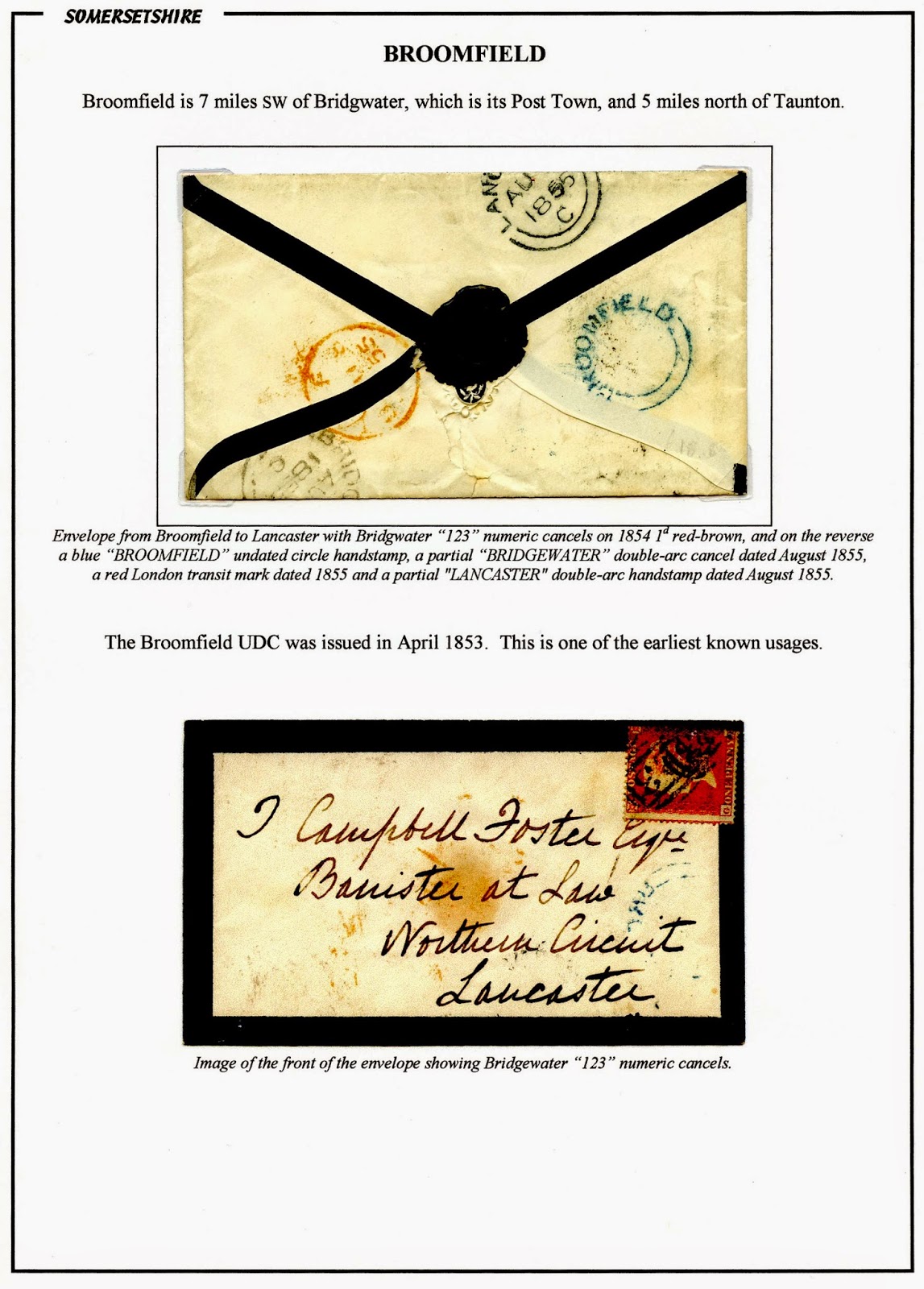 Here are a selection of Taunton Maltese Crosses, starting with one from September 1840 in red. 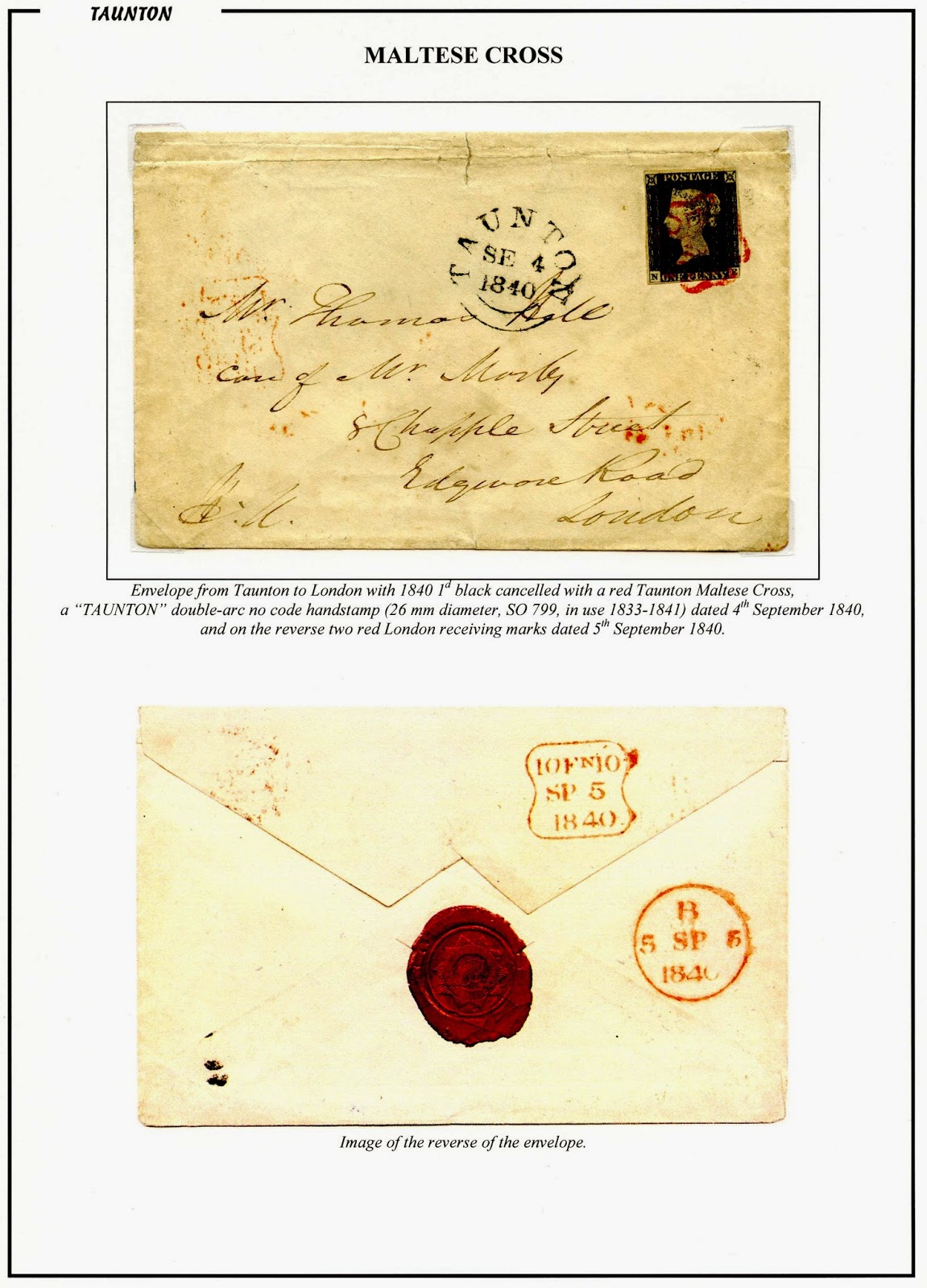 Next here are three sheets with Maltese Crosses from 1843, starting in March and July, then two more from November and December.  According to the Proof Books a new Maltese Cross cancel was issued to Taunton in August 1843. 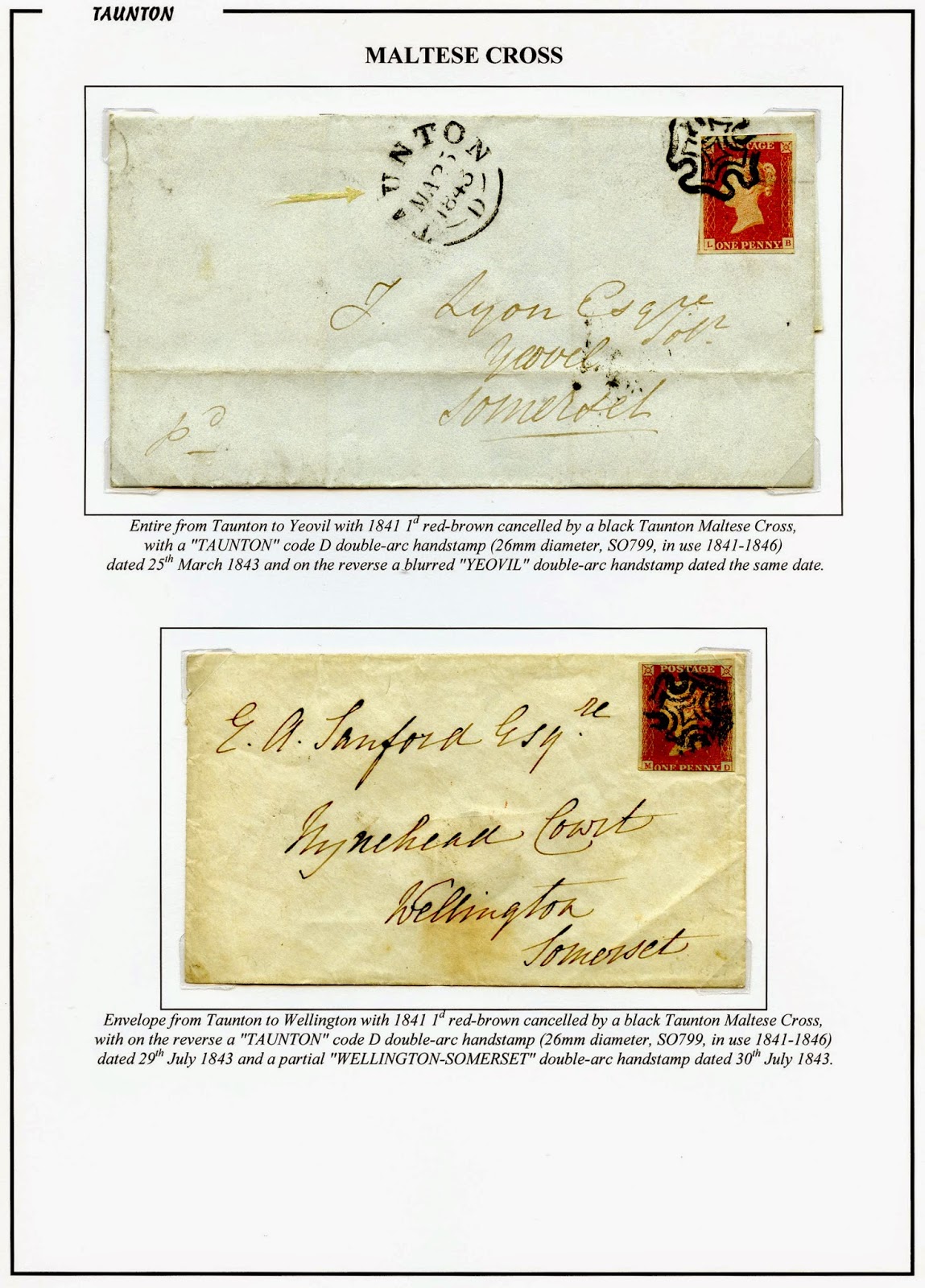 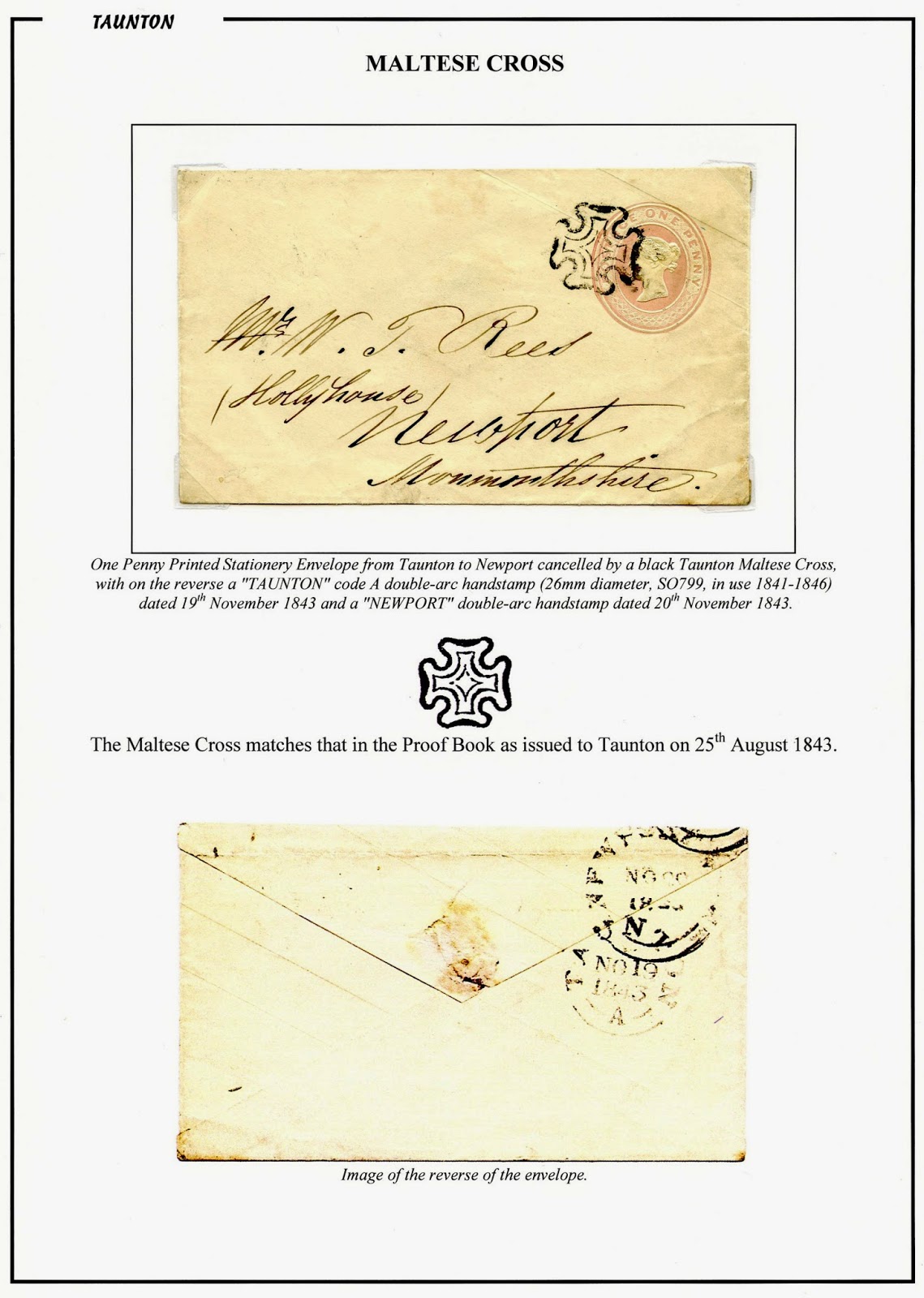 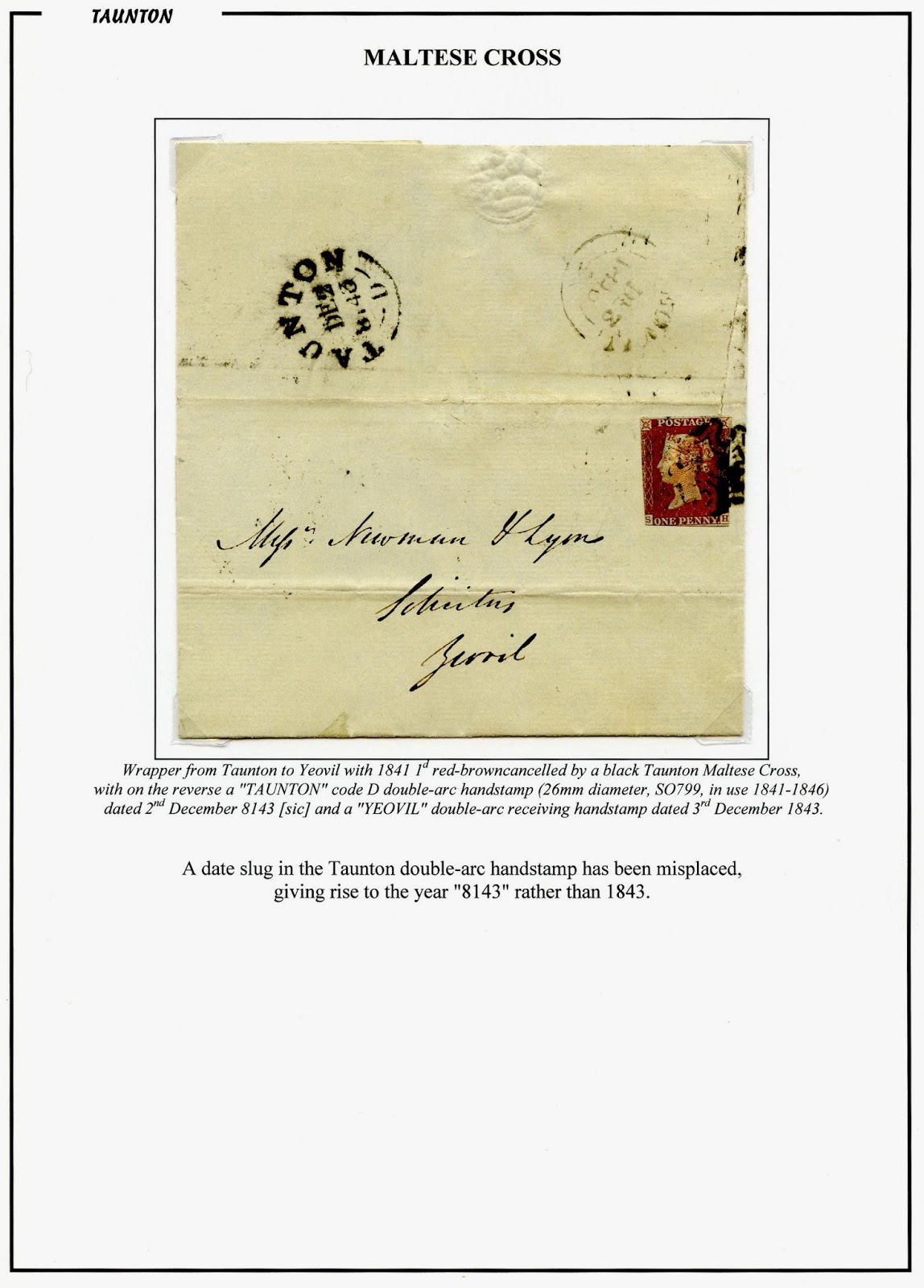 And finally two Maltese Crosses on redirected mail that were both charged an additional 1d for the redirection (this was an additional 1d charge not a surcharge of doubled postage due).  The second of the two entires is addressed to the Countess of Lovelace, who has been called the first computer programmer (see Wikipedia). 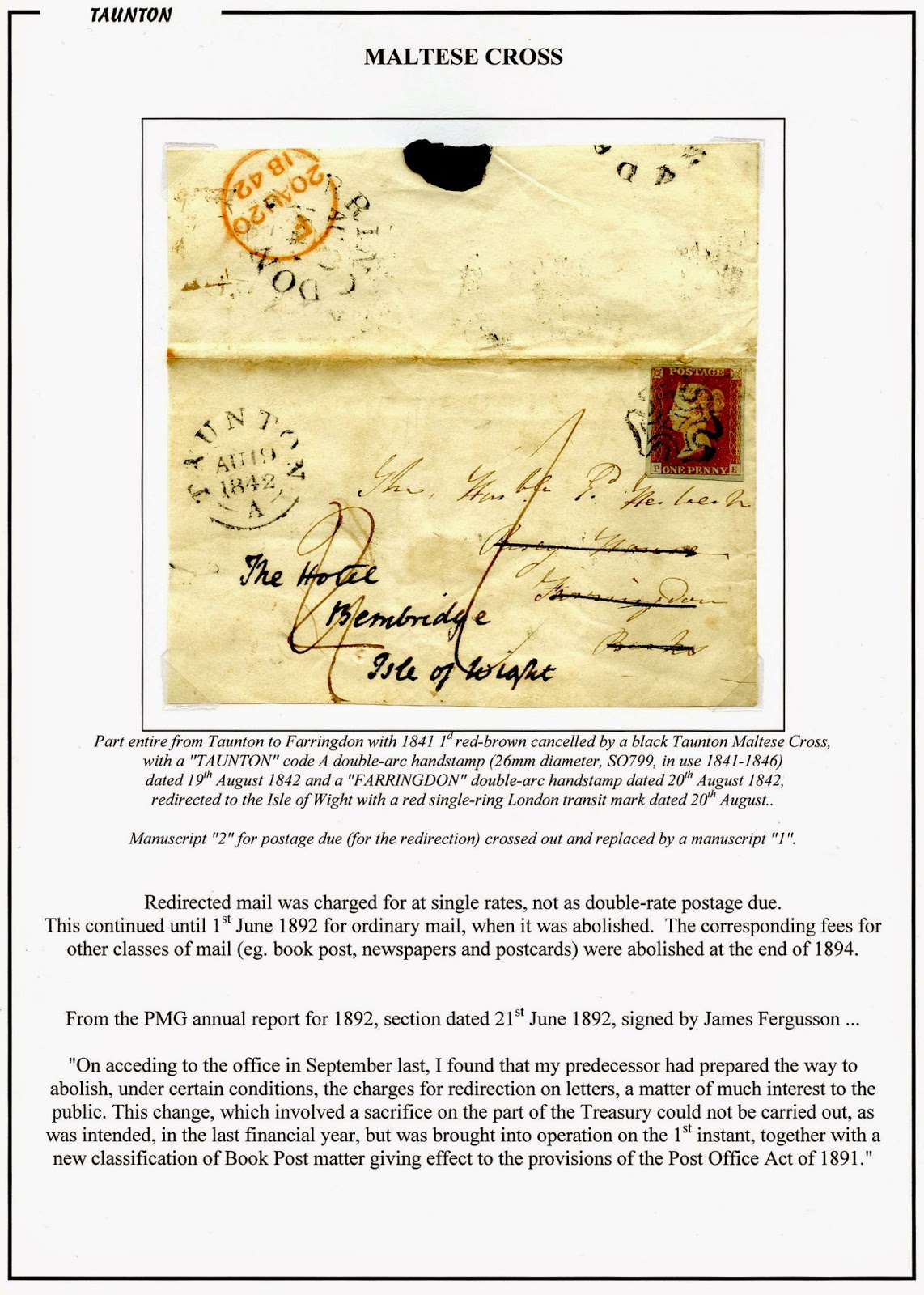 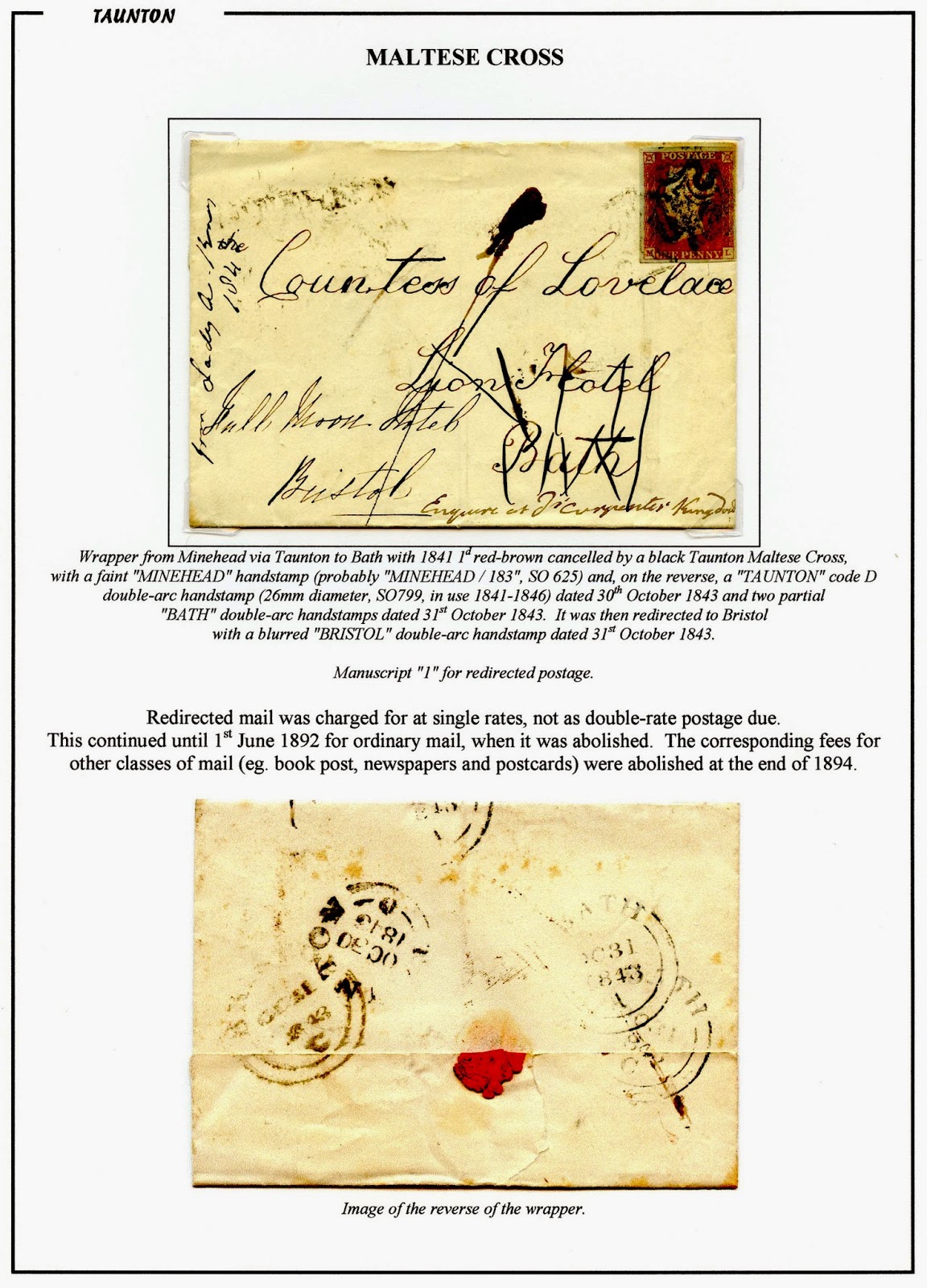 A few entires associated with Dulverton - firstly an entire from Hollam which is just outside Dulverton, with a clear "TIVERTON / Penny Post" and a boxed "No.2" handstamps.  Oxley has Dulverton in the Tiverton Penny Post but does not assign a Receiving House number - from this entire it can be seen to be No. 2.  I don't quite understand the postal charge which seems to have omitted the Penny Post charge. 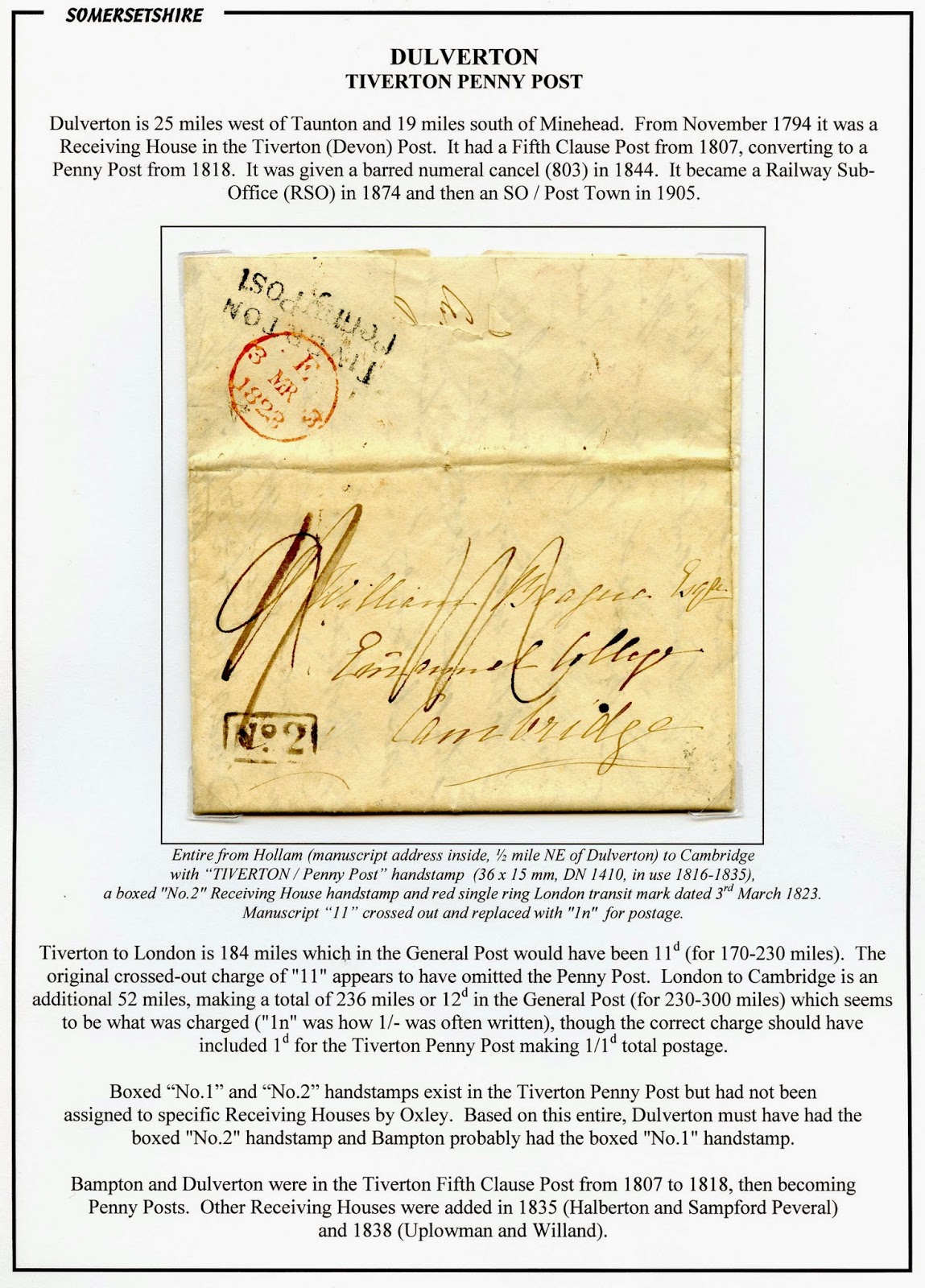 This second entire is from Tiverton with a "TIVERTON / Penny Post" handstamp dated August 1817, which is earlier than Oxley has the conversion from a Fifth Clause Post. 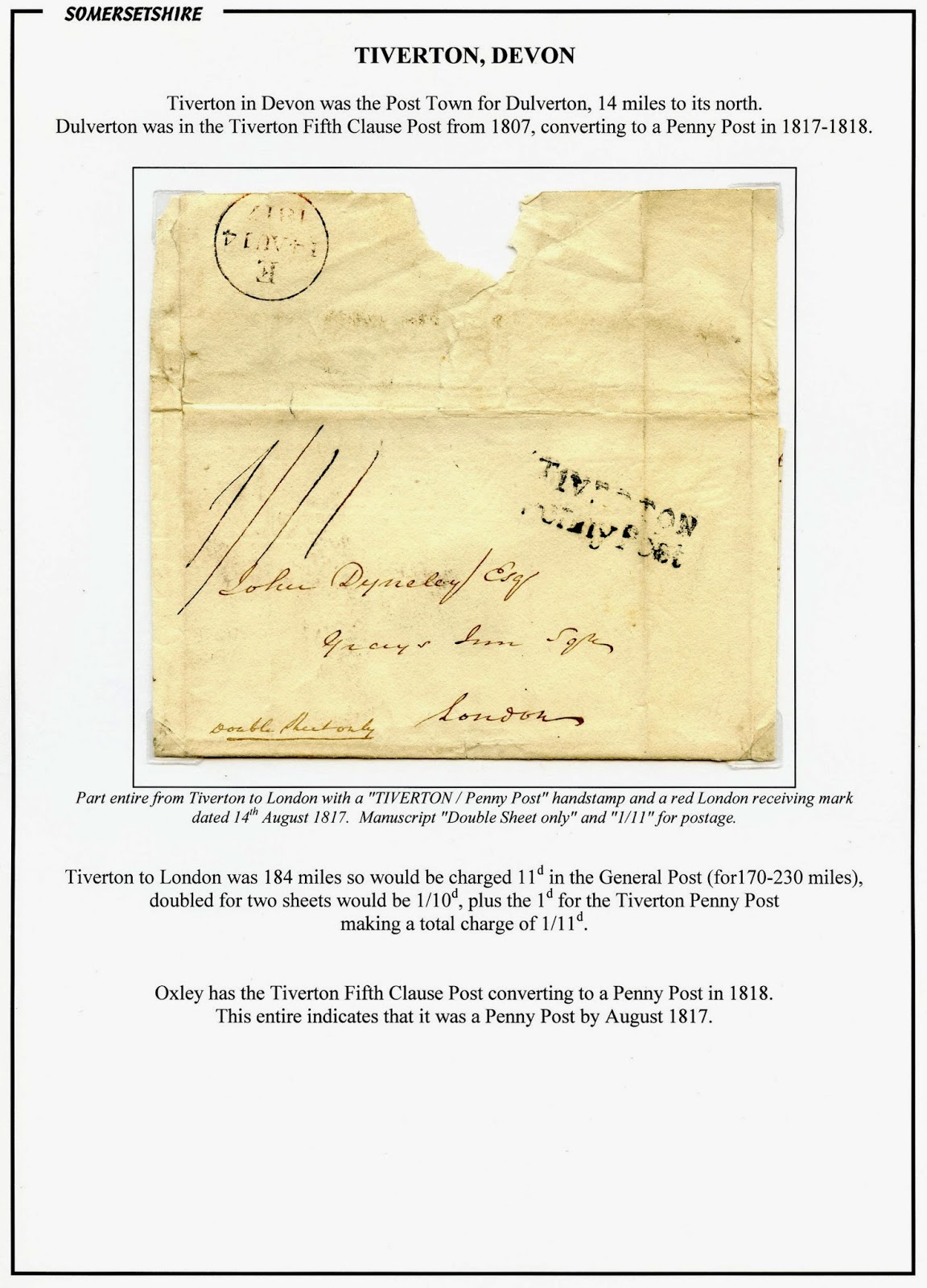 Two entires here from 1832 and 1835, with "DULVERTON" double-arc handstamps and no further markings. 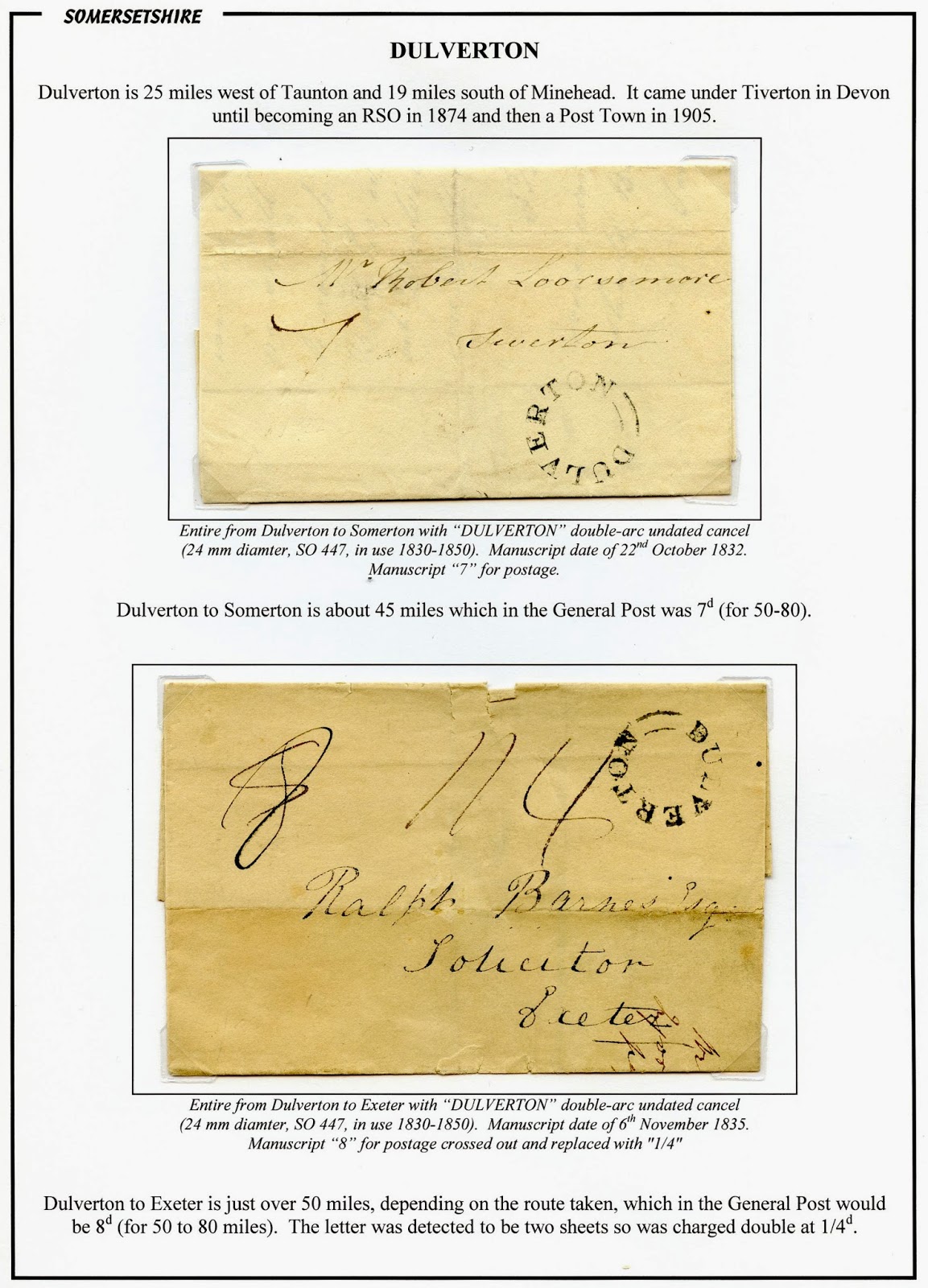 And finally an entire from May 1843 with an 1841 1d red-brown cancelled by a Maltese Cross.  While Dulverton was in the 1844 list of Offices that received Barred Numeral cancels (No. 803), the markings on this entire are not clear enough to say if the Maltese Cross came from Dulverton. 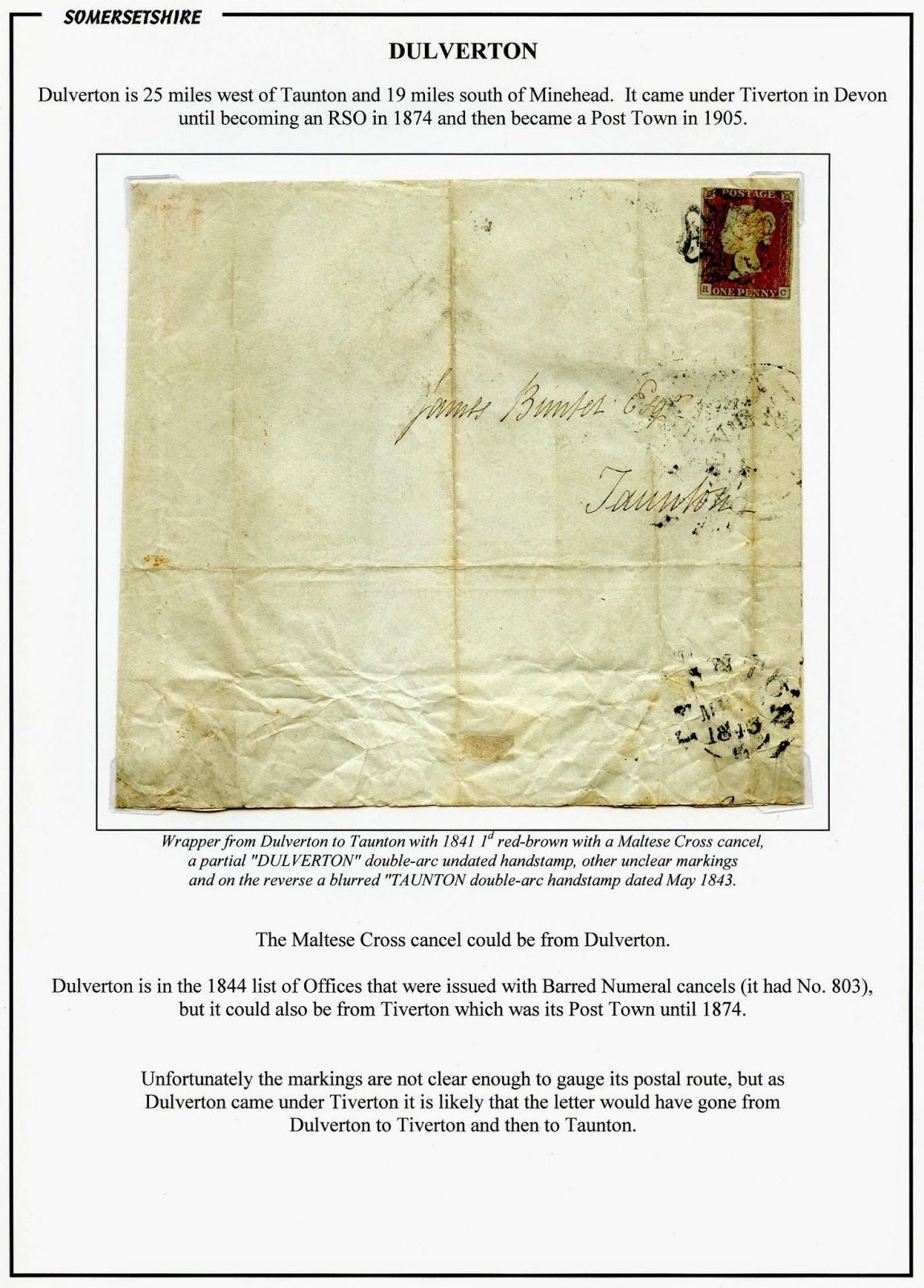 Three entires from Minehead with 2d postal charges.  Firstly an entire that went from Minehead in the Minehead and then Taunton Penny Posts to Stogumber and was charged 2d.  This was a prevalent charge for a "short" letter in the South-West, where letters that did not go into the General Post were charged 2d rather than 1d.  The entire also has a manuscript "put in 19th" as a forefunner of the modern "incorrectly dated by sender" cachet. 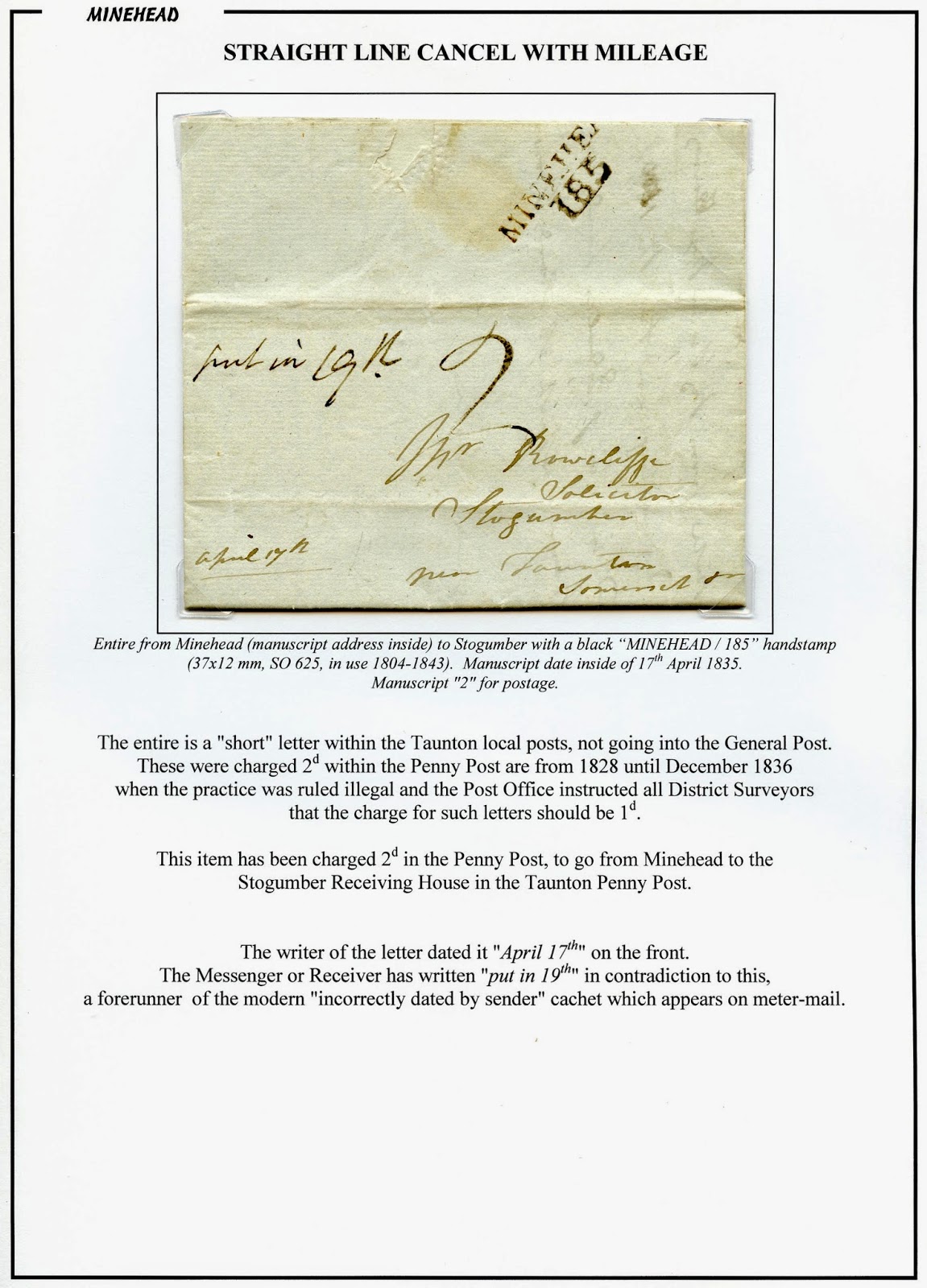 The second entire is a similar item going from Minehead to the Washford Receiving House in the Taunton Penny Post.  In addition to the large manuscript "2", it has a smaller "4d" top right of the front.  This probably represents the total charge including a local (private) delivery charge of 2d for delivery at Old Cleeve by the Receiver at Washford. 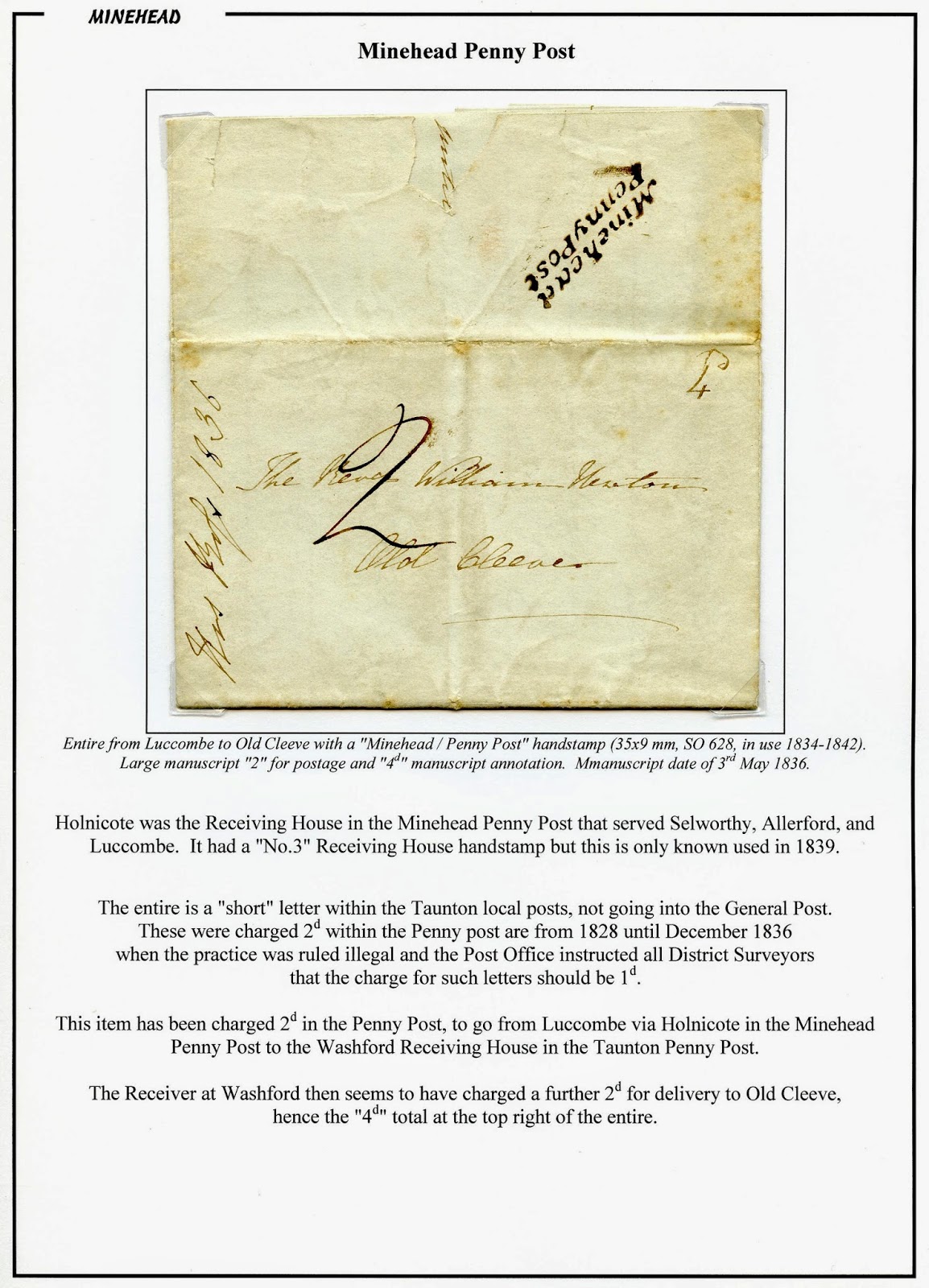 The third entire is charged 2d because it was posted unpaid in 1843 so was charged double as postage due. The "Minehead / 185" handstamp is very poor, being at the end of its life. 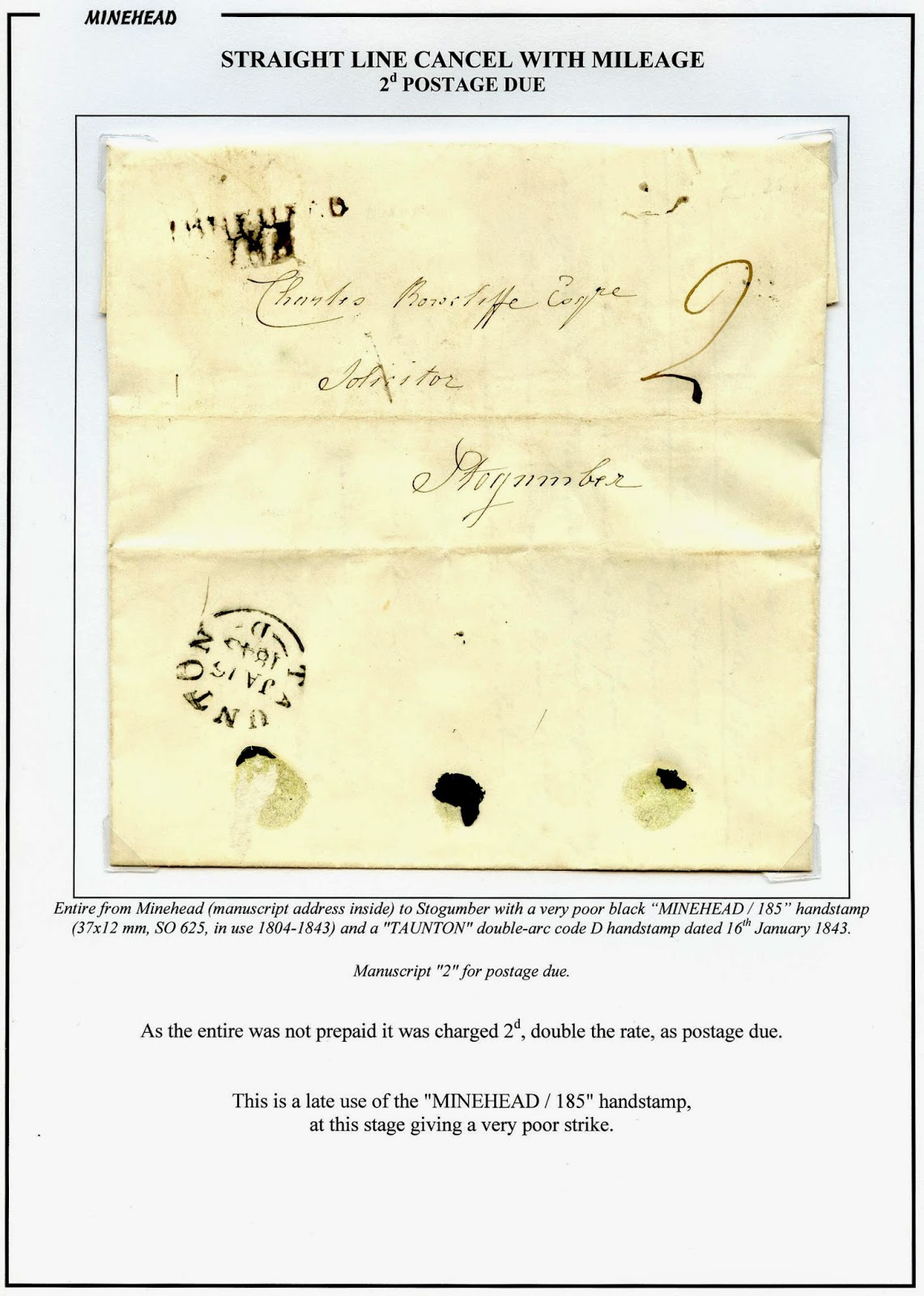 This entire gives a further hint that Bruton had a Maltese Cross.  It is from Bruton to Shaftesbury in May 1840, without any postage stamp (because Bruton was too minor an office to have received postage stamps that early). 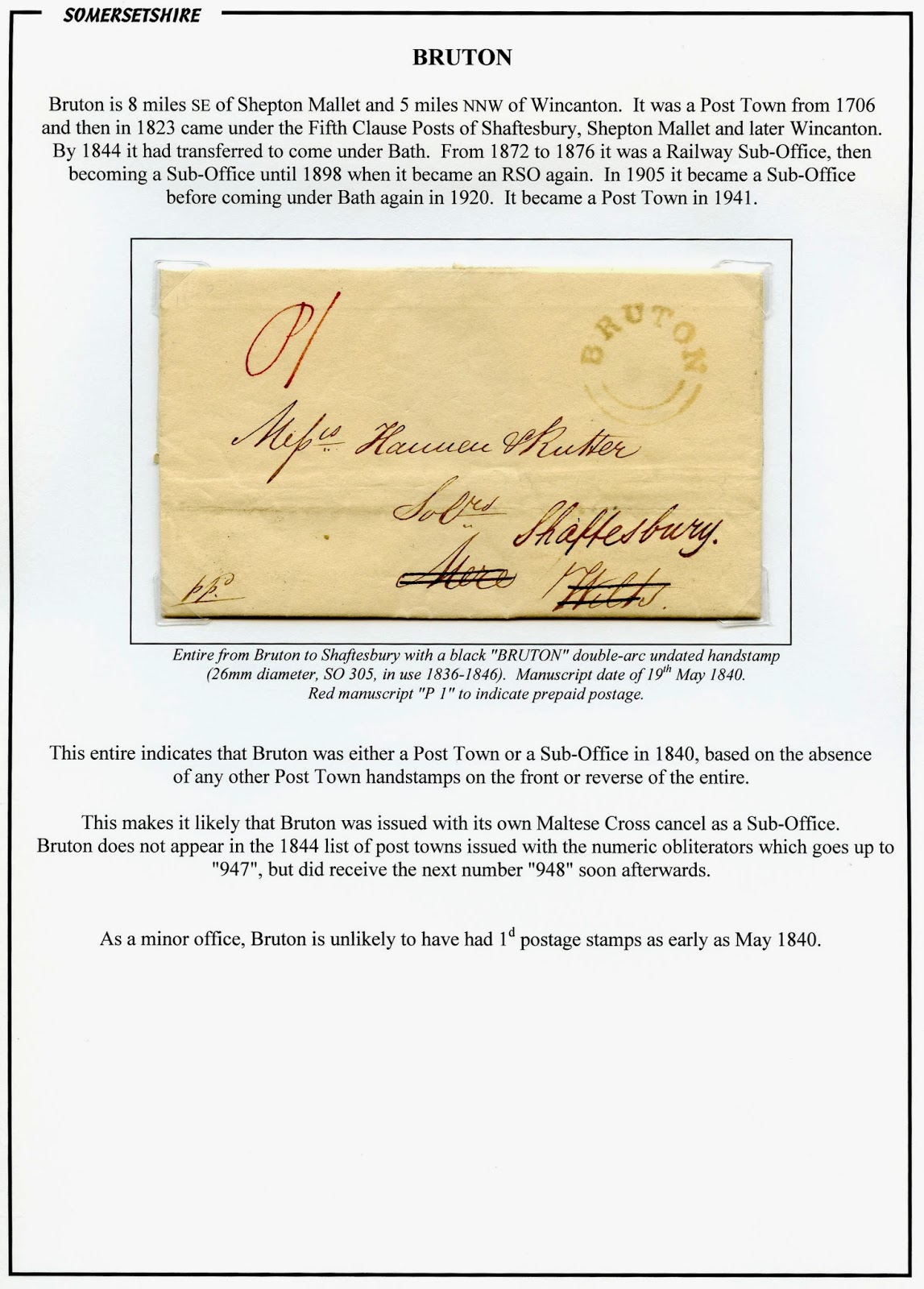 The interesting thing is that it did not receive any postal markings other than the "BRUTON" double-arc undated handstamp.  If Bruton had been a minor village office then it would have received a handstamp from its Post Town.  In particular, the route from Bruton to Shaftesbury will have gone via Wincanton, the most likely candidate for Bruton's Post Town, so the absence of a Wincanton handstamp is fairly indicative of Bruton's status in 1840.

So it is likely that Bruton was a Sub-Office by 1840, and as such should have received a Maltese Cross - perhaps at the same time as it received some 1d black stamps !
Posted by Leamphil at 07:00 No comments:

Here's a very nice example of the Wiveliscombe Maltese Cross in black from August 1841. 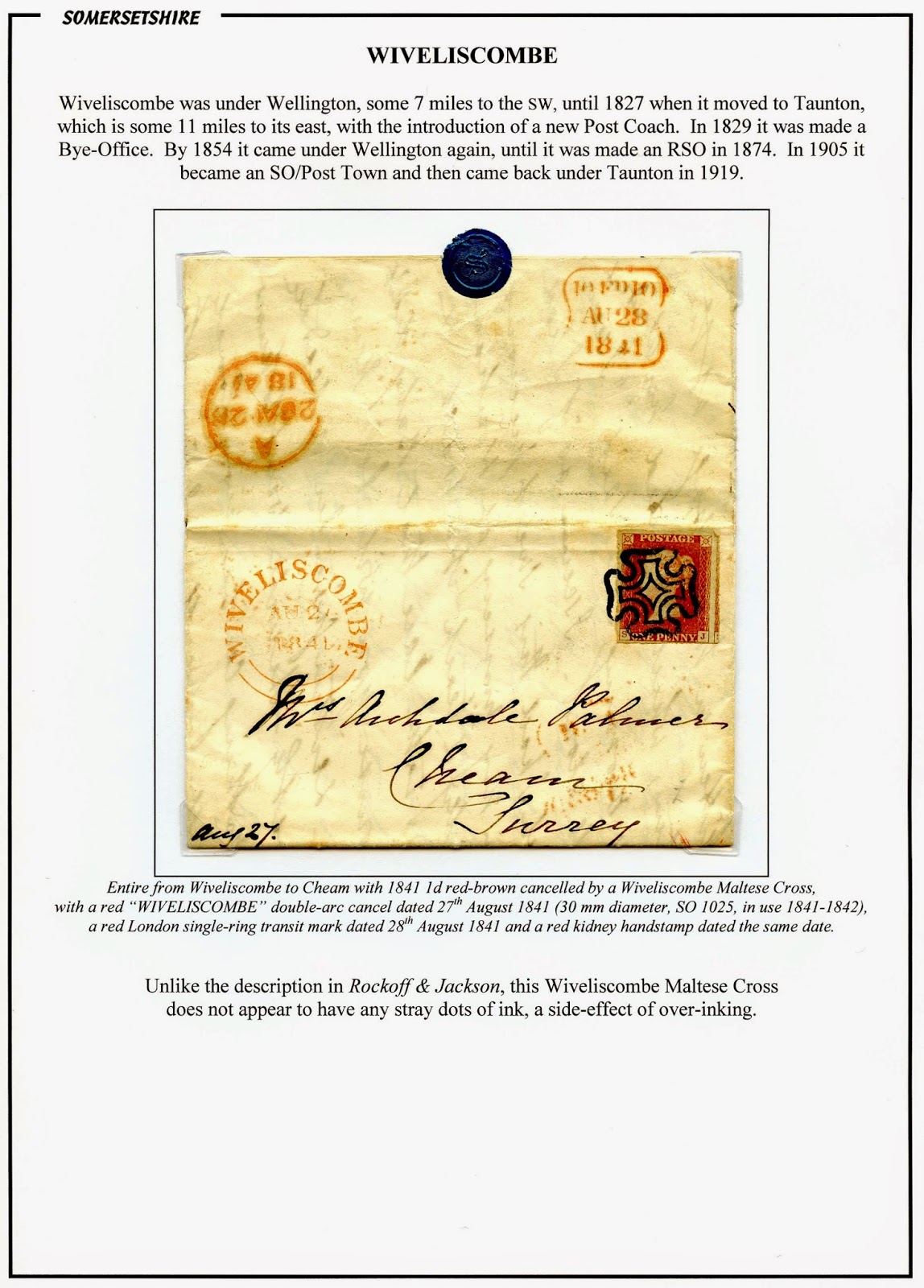 The Wiveliscombe Maltese Cross features in Rockoff & Jackson where it is described as being prone to over-inking and having stray dots of ink as a result.  This example does not exhibit this behaviour but is earlier than the examples shown in the book.
Posted by Leamphil at 07:00 No comments: