An example of an early Penny Post from Bridgewater (at this time the name was spelled with an 'e' in the middle), with a large boxed "No.1" cancel from the Receiving House in Stowey. 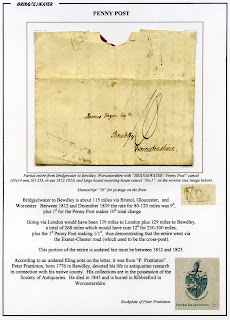 Posted by Leamphil at 19:44 No comments:

Cancels in the National Interest were also used.  This first sheet has examples of "British Goods Are Best" from 1925 to 1927. 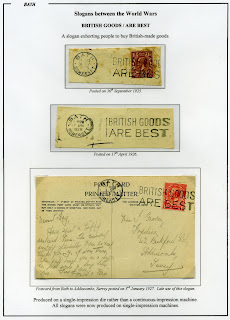 Road Safety was also in the public eye.  The 30 mph speed limit in built-up areas was introduced in 1935.  After this road fatalities fell from 7,343 to 6,502.  However they crept up again to 8,609 per year which prompted the safety campaign illustrated below. 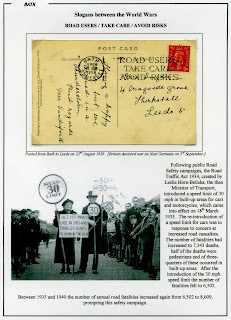 With the kind permission of Ken Smith, I've put his lists of Post Offices for Somerset, Dorset and Bristol up on the web page for the S&DPHG (links are at the top right of the page).

The lists are in PDF format so should (?) display and print out OK - please use the Enquiry form on the web page to let me know of any problems.

Please also use the Enquiry form to let me know of any errors or changes so I can feed them back to Ken.  Please give details/evidence of why things need to be changed so I can pass that on too.
Posted by Leamphil at 07:00 No comments:

"Say It By Telephone", "Its Quicker To Telephone"

The Post Office was also responsible for Telephony, so were not adverse to moving the public away from Mail to the Phone. 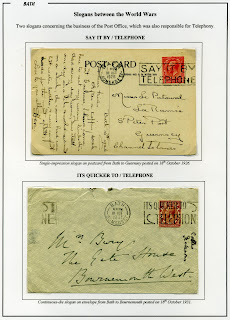 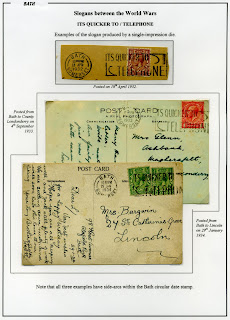 Email ThisBlogThis!Share to TwitterShare to FacebookShare to Pinterest
Labels: Bath, Its Quicker to Telephone, Say it by Telephone

I've just attended the October meeting of the Somerset & Dorset Postal History Group at Hornsbury Mill, Chard (having managed to persuade my wife to tag a couple of days on to a holiday in Cornwall and North Devon).

It was a very interesting day, with two 90-sheet displays on Parliamentary Mail and on Destination Mail from Bristol, plus about a dozen 9-12 sheet displays from the members attending on a variety of subjects (mainly but not exclusively Somerset or Dorset related).

Lunch was very good too !

As a result of the meeting I've started putting up a website for the Group - which has already generated one enquiry.

I took along a few sheets, mainly with questions, including the sheet below that I've already posted to this blog. 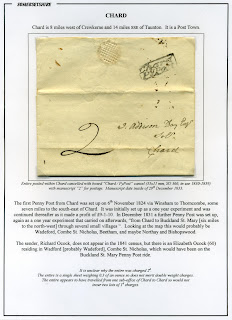 The general opinion was that this was an "illegal" 2d charge where the Penny Post had been increased to Two Pence by the Post Office, but which then had to be reduced to 1d when challenged in the courts.
Posted by Leamphil at 13:21 No comments:

It was three years after the end of WW I that the Post Office allowed slogan cancels again, confined to matters relevant to the postal services or which highlighted important national events.

Post Early for Christmas:  note the change in format for the later cancels, with the bars either side of "FOR" being omitted. 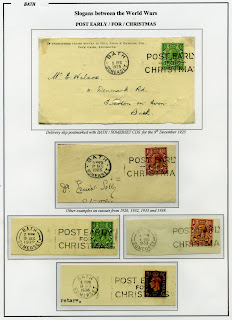 Post Early in the Day:  continuing campaign to get the public to adopt practices that made it easier for the Post Office. 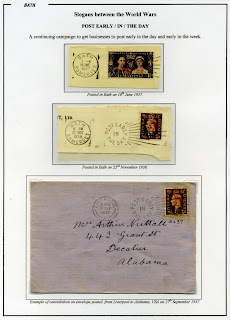 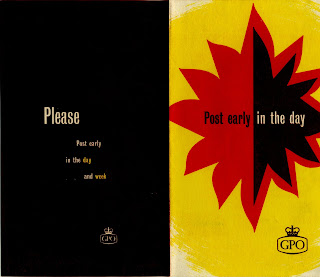 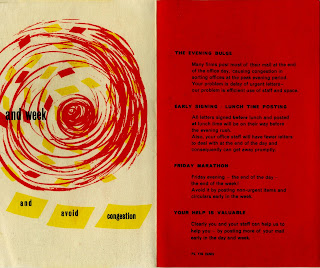 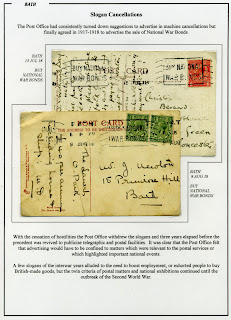 These cancels were withdrawn on the cessation of hostilities.
Posted by Leamphil at 07:00 No comments:

A few sheets of cachets - firstly "To Pay". 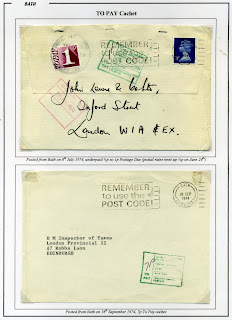 The bottom cover is a fairly common occurrence of someone deciding they should not have to pay postage to send mail to the Taxman.

Then three examples of "Undelivered for Reason Stated / Return to Sender", in purple, in black, and finally in green with a sticky label as well. 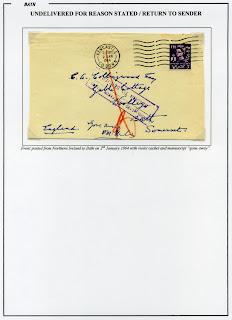 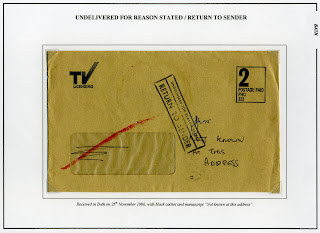 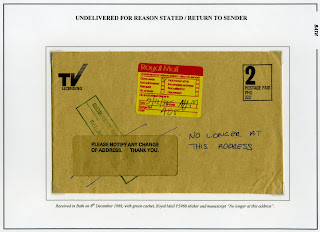 Three pages from the 1980s and 1990s, firstly of "BATH / AVON" cancel, then "BATH" (no county) at the top, and finally "BATH" (no county) at the bottom.  The cancels are noticeably getting less and less legible - is this anything to do with the move towards the transfer of duties to Consignia, a public limited company wholly owned by the UK government,  set up in November 2001.

It's also haphazard in the cancels I have got whether the time is shown on the cancel or not. 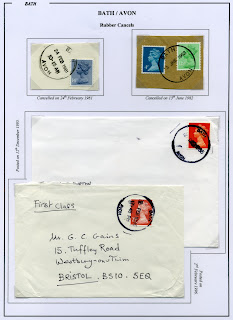 I've labelled the cancels above as "Rubber Cancels" - this is probably incorrect but was based on the general illegibility and blurring, similar to that shown on earlier rubber cancels.

The County of Avon was dissolved on 1st April 1996 (was it deliberate to set it up and dissolve it on April Fools Day ?) and Bath became part of the Bath and North-East Somerset Authority. 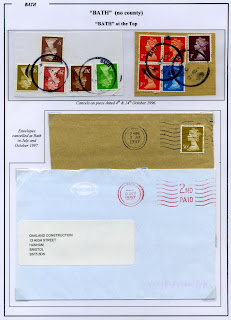 The cancels ceased to show a County, being either at the top or at the bottom of the cancels. 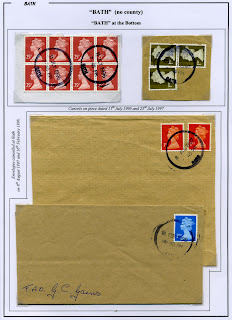 Transposed slogan cancels were first introduced in Bath on 1st July 1963, and reverted to untransposed format from 1976. 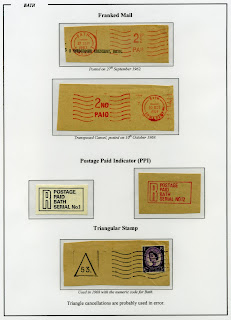 The County of Avon came into existence on 1st April 1974 and lasted until 1st April 1996, when Bath became part of the "Bath and North East Somerset" authority. 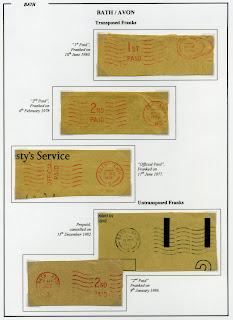 Just one example of each of these: 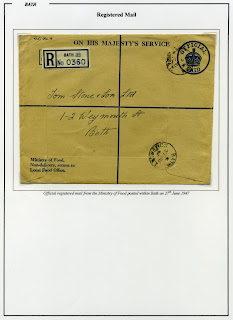 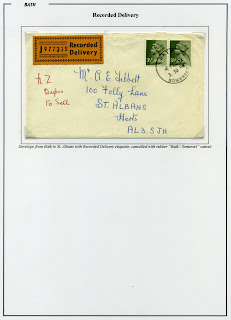 A few sheets illustrating Bath machine cancels, continuous and single impression.  More later when I get on to Slogan cancellations. 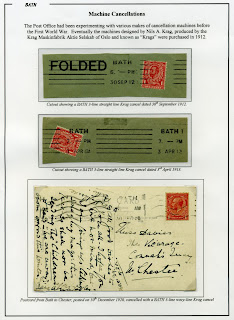 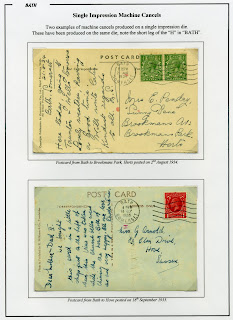 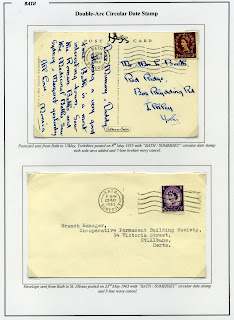