Here are a couple of cancels from Avonmouth, Bristol - Avonmouth being just north of the River Avon does not fall into my definition of Somerset but here are the cancels anyway ! 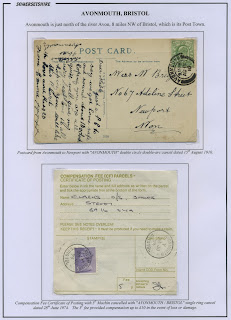 Thorncombe in Dorset is obviously also not in Somerset but the cancel is for "THORNCOMBE / CHARD.SOMERSET" so does fall within my definition of Somerset. 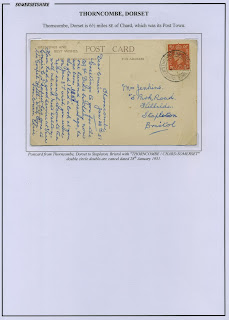 Two examples of the "CHARD" skeleton from 1920. 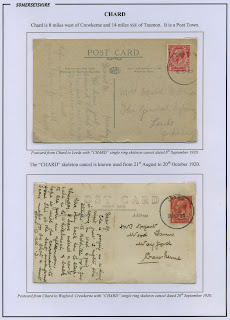 And two examples of the "CONGRESBURY / BRISTOL" skeleton from 1905. 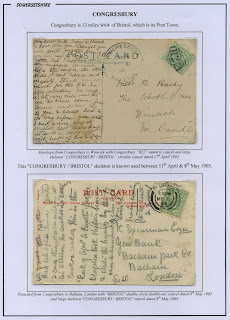 A few not too exciting entires, firstly a "Bridgewater / Penny Post" handstamp with a manuscript "To Late" [sic] inscription on the front, from 1833. 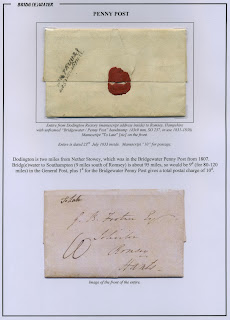 Another example of the "No.1" Receiving House handstamp from Beaminster in the Crewkerne Penny Post, from 1834. 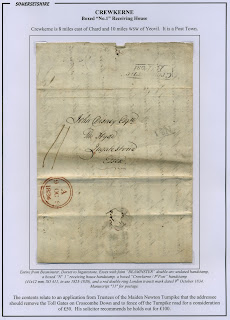 An undated example of the "DULVERTON" double-arc undated handstamp which has to come from 1830-39: 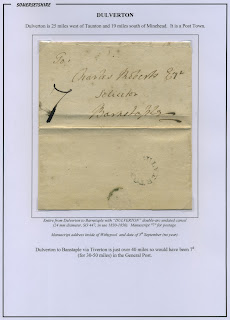 And finally a nice example of the "TAUNTON" dated circular handstamp with the mileage erased from 1829. 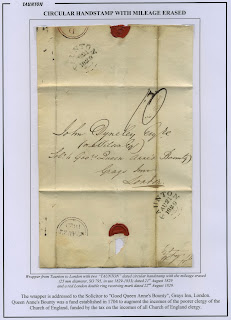 Some more recent acquisitions, this time from Bristol starting with a straight line handstamp from 1782 with a bishop mark and charged double rate. 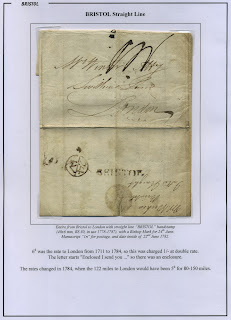 Next an entire with a single-arc "BRISTOL" handstamp and an unframed "TOO LATE" handstamp from 1831. 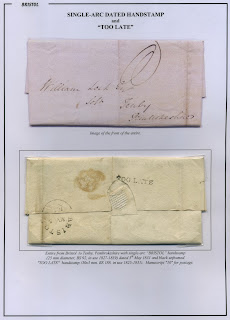 Here's another example of the "Redland / PennyPost" handstamp, this time from 1849. 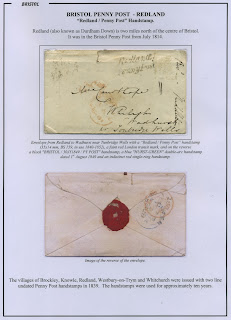 And finally a skeleton from St George, Bristol (not to be confused with St George's Somerset) from 1925. 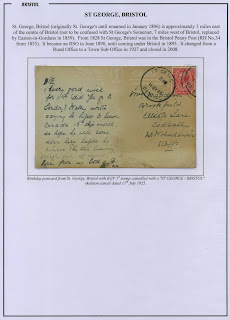 Three items associated with Wells, firstly an entire from 1844 with a boxed "No.3" Receiving House handstamp which was from Banwell. 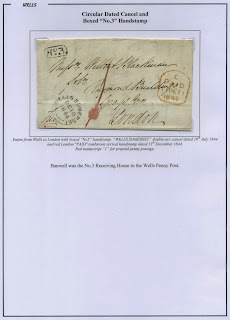 Then two examples of the "BANWELL / S O" skeleton handstamp from 1920. 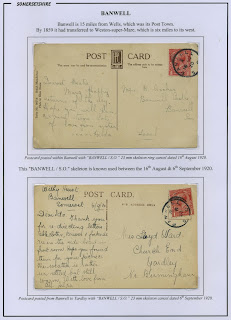 And finally a postal stationary letter postmarked "P.O.W. CAMP / GREAT BRITAIN / NO.107" which was located at Wookey Hole Road, Wells. 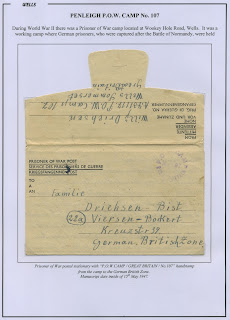 Bristol Postage Due Handstamps and Other Cachets

Here are a few Postage Due and other cachets from Bristol (Post Office number 134), starting with an envelope with a ½d stamp cancelled with a "BRISTOL" continuous machine cancel, with a triangular "134" handstamp (an inspector's mark ?) and a framed "1D / TO PAY / LIABLE TO LETTER RATE" cachet. 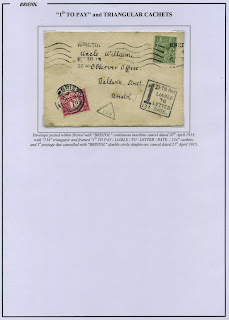 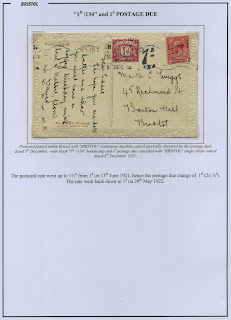 Next an example of a red "1D / TO PAY / 134" handstamp - the postcard was posted without a stamp but was only marked as 1d to pay so appears to have been treated as Printed Matter (the rate was ½d for up to 2 oz. from 1923 to 1940, so would be double rate or 1d postage due) despite the writing on the back. 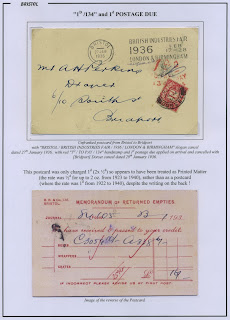 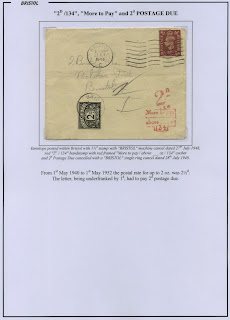 And finally an envelope that was underfranked with a cachet from Reading where it was posted, but then when it got to Bristol it received a framed "Not to be Found / 134" cachet and a boxed "UNDELIVERED FOR REASON STATED / RETURN TO SENDER" cachet.  One wonders if the recipient, Plymouth Philatelic Auctions, refused to accept the letter and pay the Postage Due ? 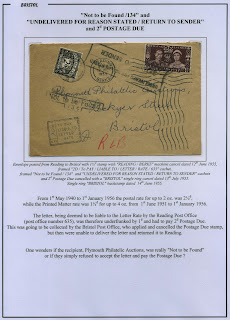 A Newspaper posted to Pensford in 1877

Below are images of the front and back of  a page of "The Local Government Chronicle and Knight's Official Advertiser" which was sent to "All Boards of Guardians and Sanitary Authorities" which was published weekly.  As stated on the front cover this had been "Registered at the General Post Office as a Newspaper".

From 1870 each copy of a periodical registered as a newspaper with the Post Office could be sent at a special rate (initially this was regardless of weight).  From 1870 to 1915 this rate was ½d each - but this posting of a registered newspaper for some reason did not take advantage of the rate, being franked with a 1d stamp. 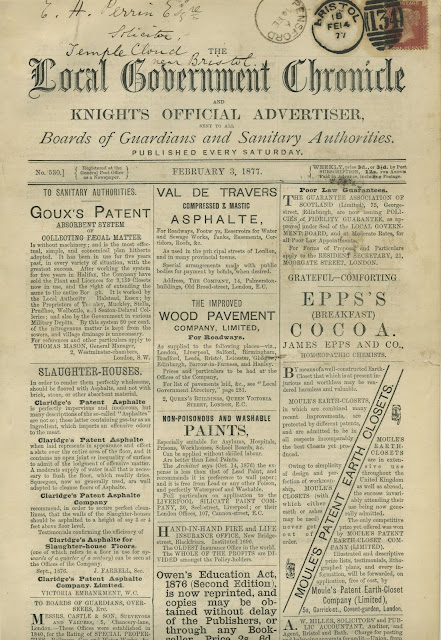 As can be seen and as was normal for newspapers of the time, the front consists of commercial advertisements aimed at the target audience of sanitary engineers and guardians who managed the workhouses or poor houses.  The reverse of the page has "official" advertisements for Medical Officers, Schoolmistresses, Nurses and other posts associated with the workhouses. 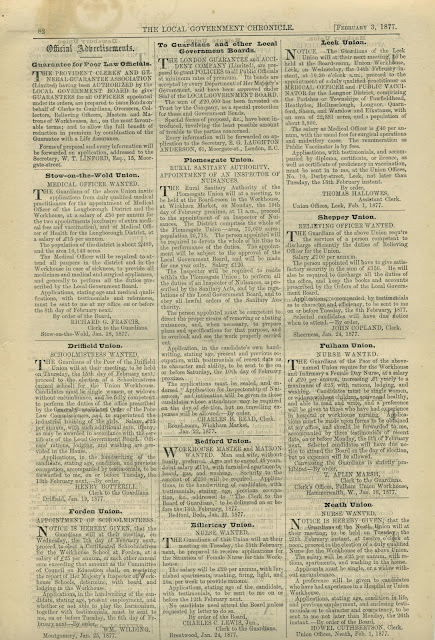 See here for the Wikipedia article on Workhouses.
Posted by Leamphil at 08:00 No comments:

In November last year I posted about the Shepton Mallet / 135 handstamps here - but unfortunately I did not have an example of the last type, with the spelling corrected and the mileage erased.  I've managed to obtain an example at last (the handstamp is only known used in 1830) and here it is.  One can clearly see the line from below where the mileage was. 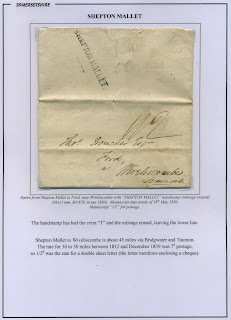 A Miscellany of items for the New Year, in alphabetical order starting with a Chard mileage mark from 1829 with a crossed-out inspector's mark and charge correction. 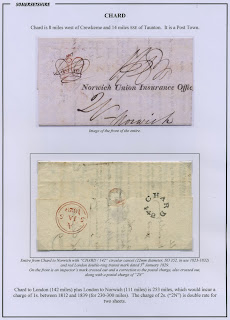 An item from Dulverton to Mr Hancock (the solicitor) near Wiveliscombe with a Tiverton Penny Post handstamp. 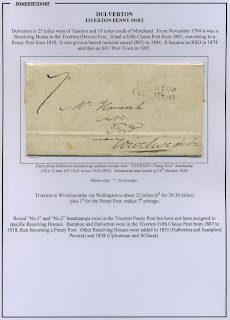 An Airgraph sent to Highbridge for Christmas 1944. 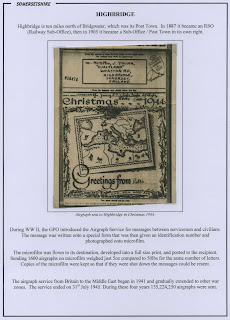 A rather messy entire from Somerton to Yeovil with a blurred Maltese Cross and a blurred double-arc dated handstamp from 1841. 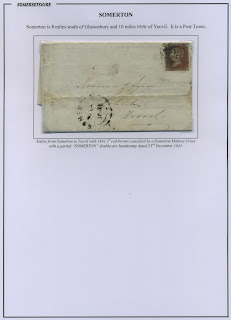 And finally a Wellington two-bar vertical oval obliterator, not in Parmenter, used to cancel a wrapper that was probably sent to Weston-super-Mare as Printed Matter. 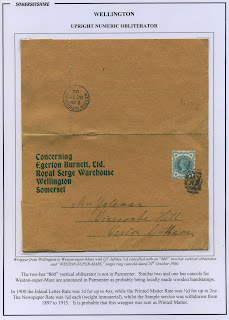