Axbridge to North Petherton - 1795 by Coach

There are no markings on the entire below to indicate that it went in the Post, just instructions to go by Coach from Cross.  The Post Office mail coach from Bristol to Bridgwater did not start until 1827. 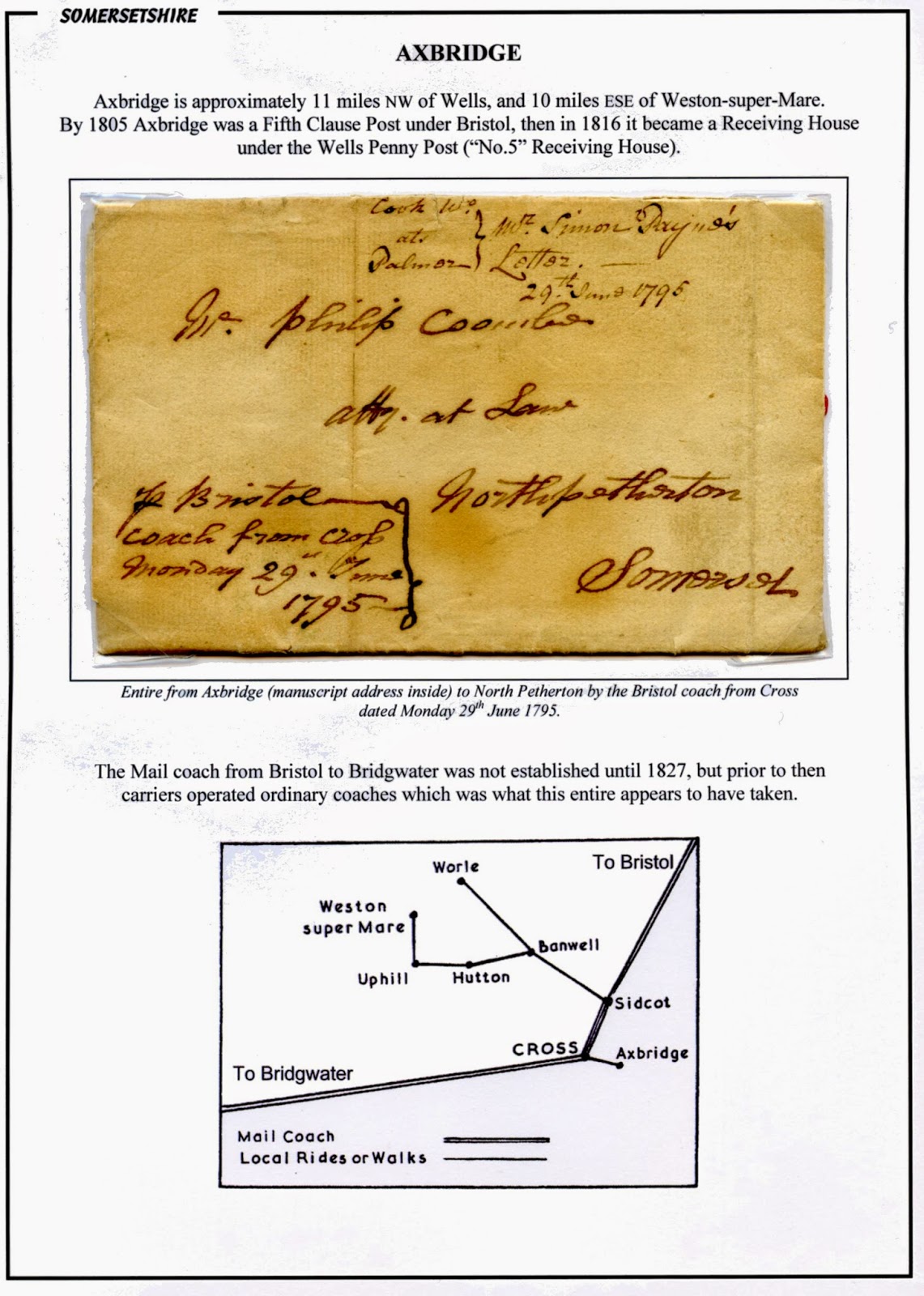 Email ThisBlogThis!Share to TwitterShare to FacebookShare to Pinterest
Labels: Axbridge 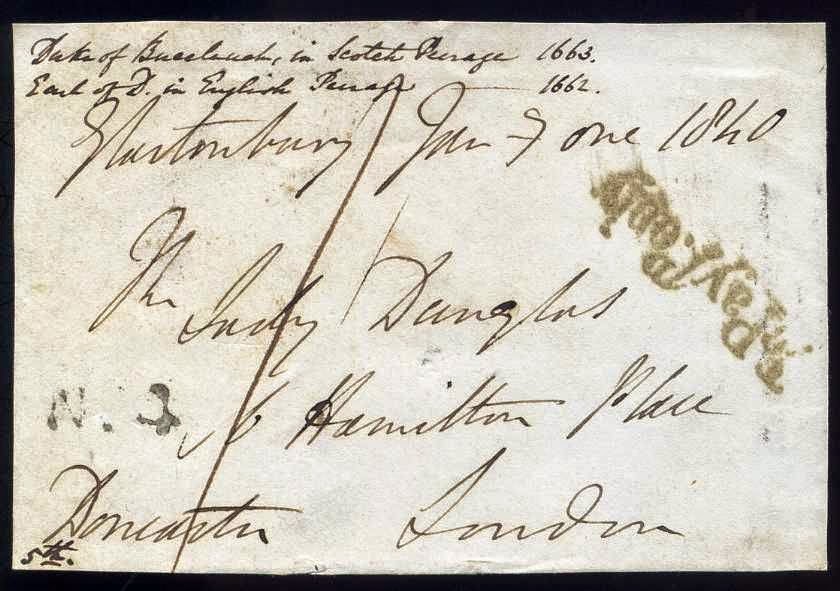 Free Front franked from Glastonbury on 1st January 1840 with unboxed “No.4” handstamp


The image above was provided by a private collector as a result of seeing the article in this blog on the Glastonbury Penny Post, where I indicated that the No.4 Receiving House handstamp was not known.

It is from the 1st of January 1840, just 9 days before the end of the parliamentary franking privilege on 10th January (with the introduction of the uniform penny post), and bears a “To Pay 1D only” cachet to indicate that only the Penny Post charge was payable.

The front is franked “Doncaster” - this was one of the titles of Walter Francis Montagu-Douglas-Scott, 5th Duke of Buccleuch, 7th Duke of Queensberry, and 5th Earl of Doncaster. The Earl of Doncaster's wife was Charlotte Anne Montagu-Douglas-Scott, daughter of Thomas Thynne, 2nd Marquess of Bath.  One of her brothers was the Right Hon. and Rev. Lord John Thynne who resided "in some style" at Walton Rectory as Rector of Street, one of his ecclesiastical appointments. The 1841 census records him as being at the Rectory in Walton, with his wife and five children.

It is probable that the Earl of Doncaster's wife was visiting her brother, Lord John Thynne at Walton when this front was sent.


It is believed that Walton was the No.4 Receiving House in the Glastonbury Penny Post and this front provides supportive evidence of this through the Thynne family connection to Walton.
Posted by Leamphil at 08:00 1 comment:

Here is an early mileage mark for Yeovil from 1790, rated at 1/- so with two enclosures.  The mileage to London had been measured at 126 miles. 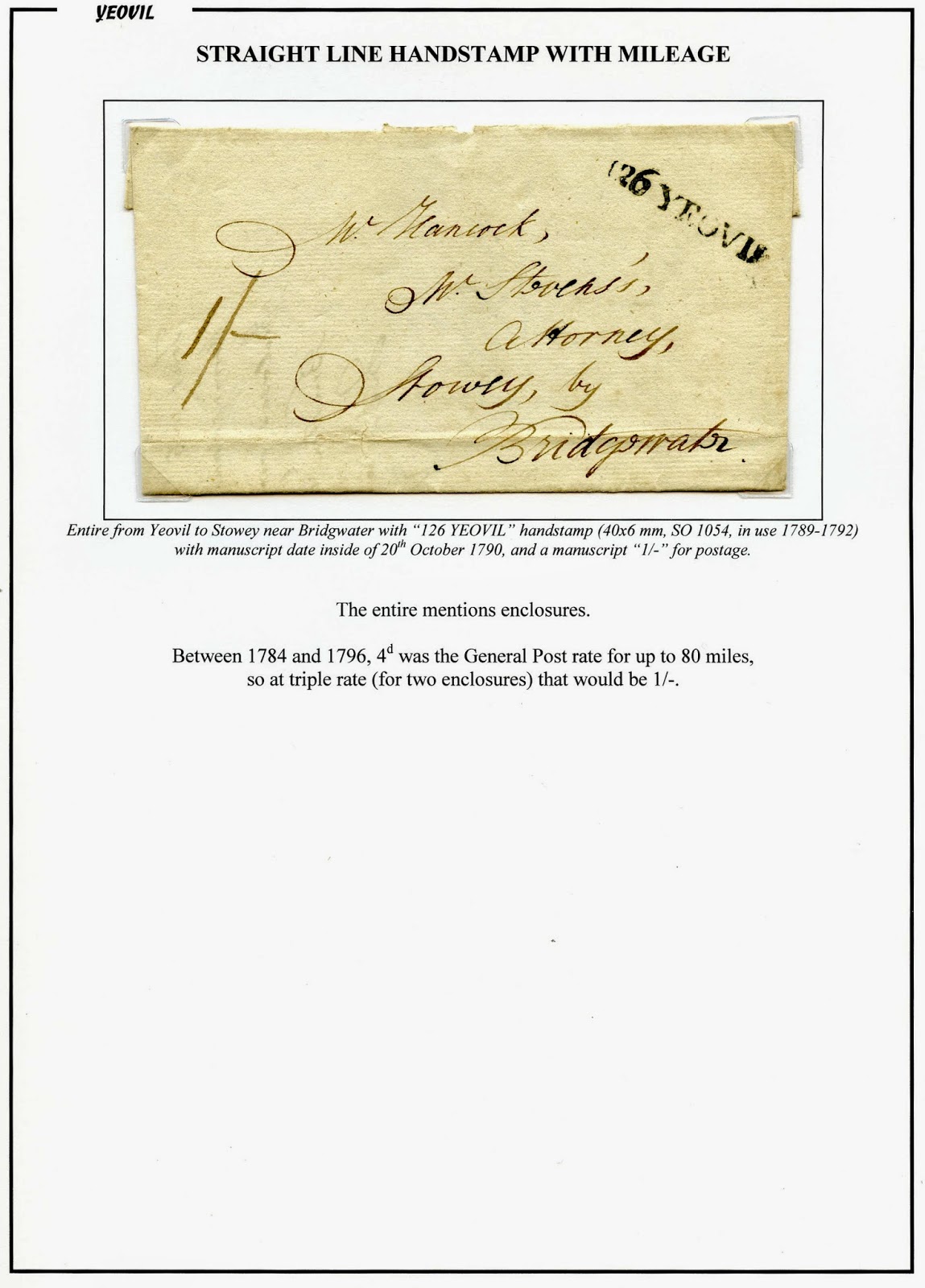 Following this is another Yeovil mileage mark from 1812 where the mileage to London is now 125 miles. 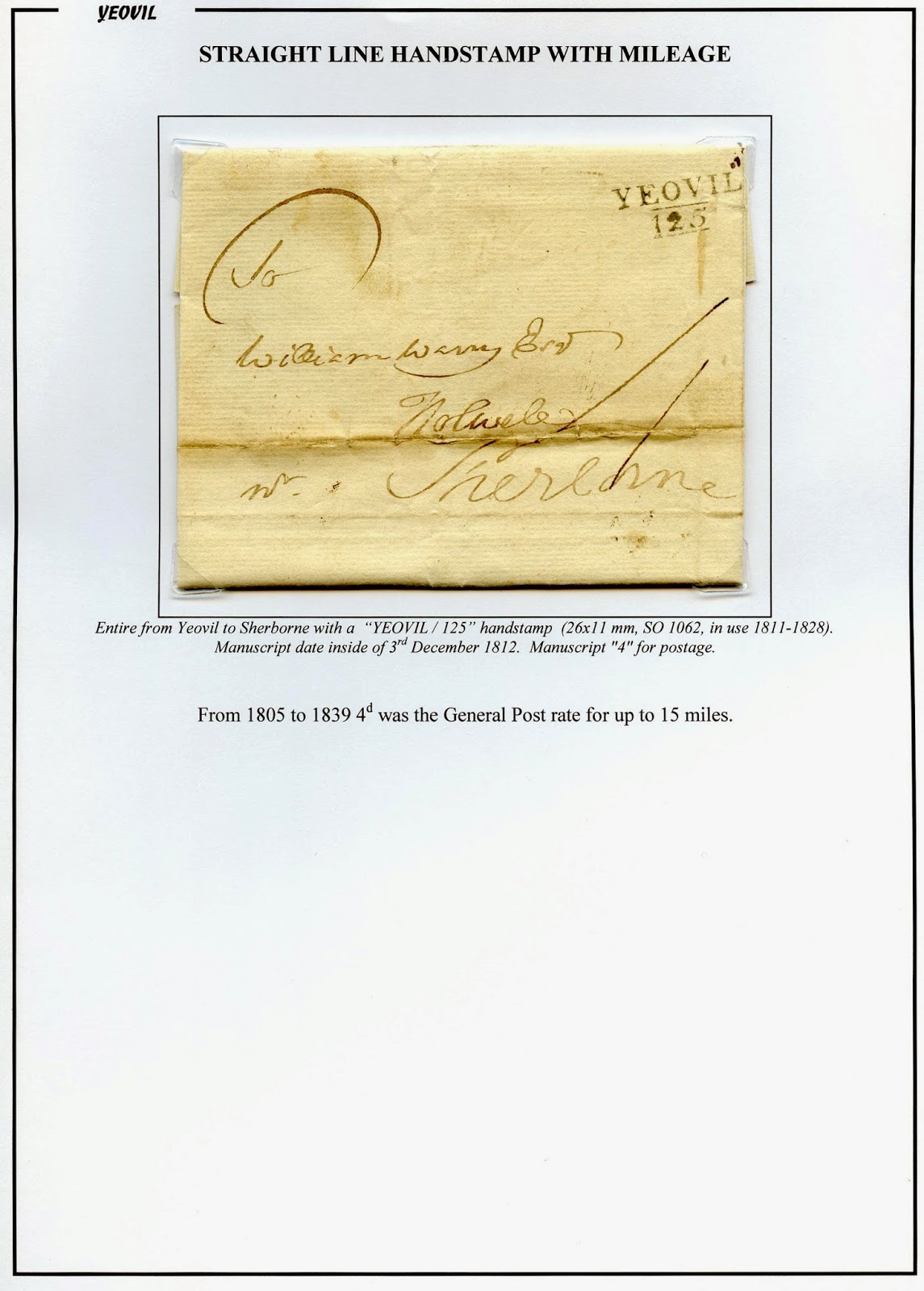 And finally a Yeovil entire from the Uniform Fourpenny Post period to Dublin, when the mileage to London no longer mattered, with a framed "Yeovil / Penny Post" handstamp. 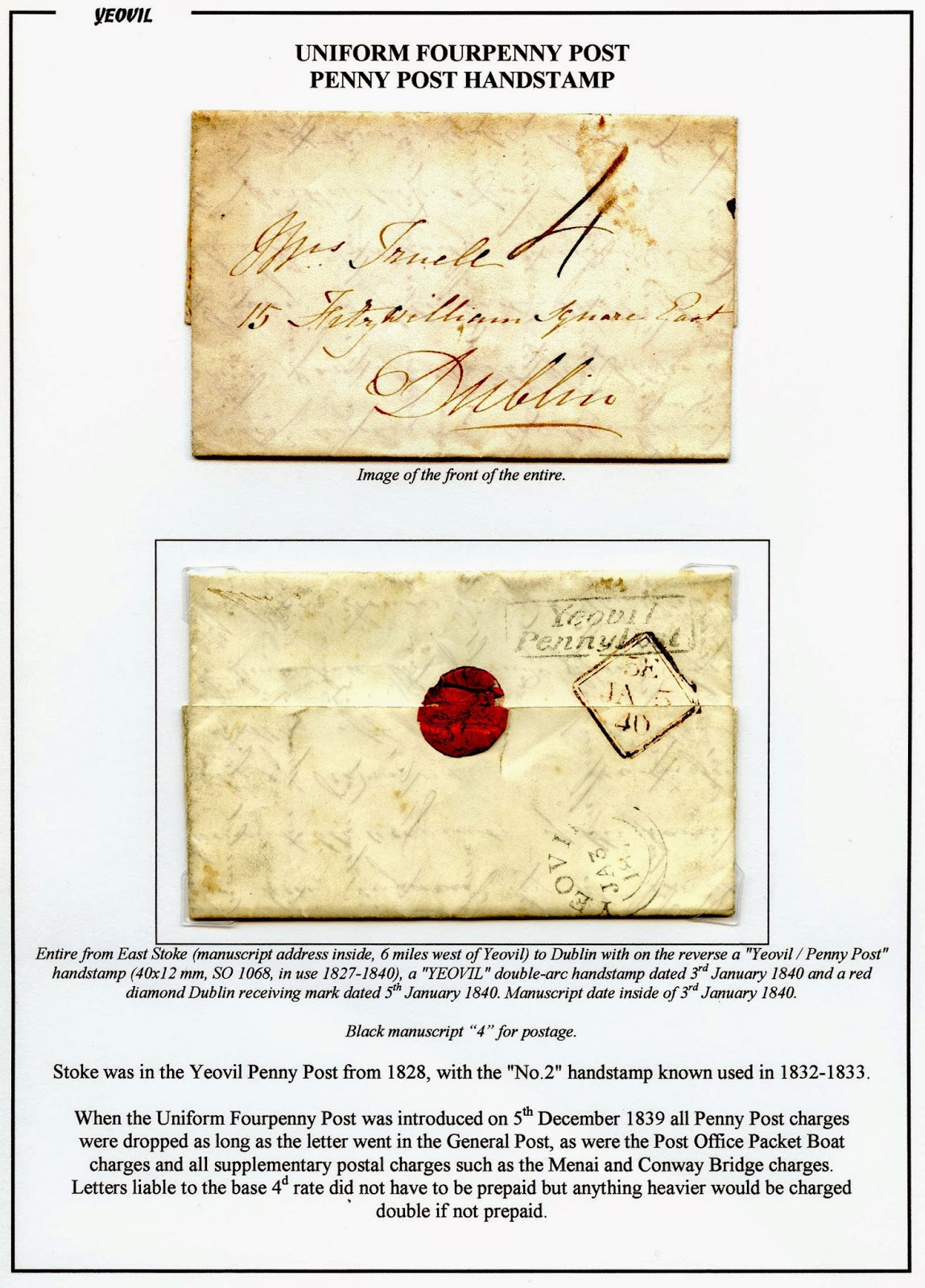 Here is an entire with a nice two-line "WELLING / TON.S" handstamp from 1786.  The postal charge of 5d implies that the route from Wellington to Maiden Newton near Dorchester was not direct ! 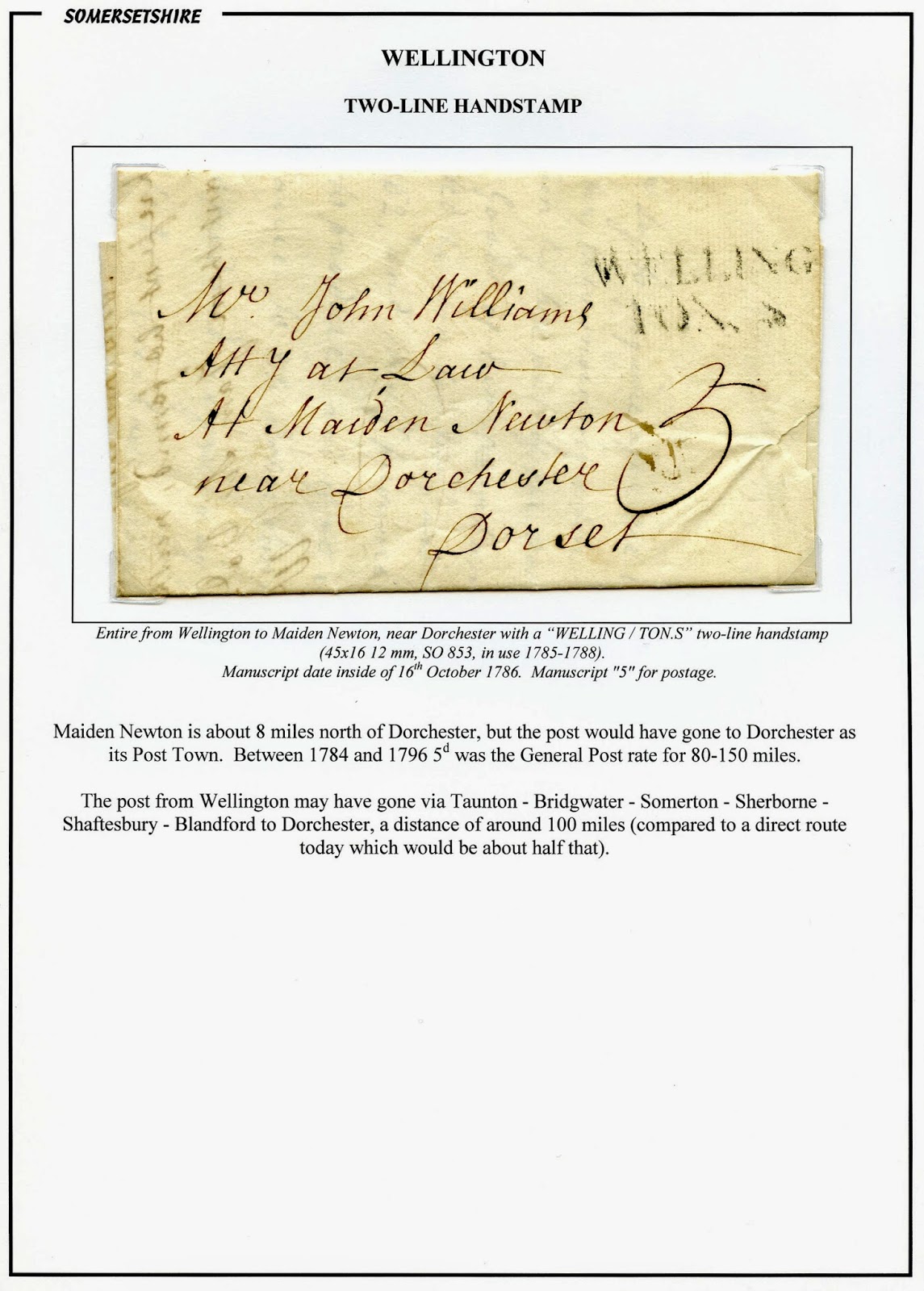 It is impossible to tell exactly when this pre-printed postcard was sent as Printed Matter.  The 1912 KGV stamp has been cancelled by a Wellington "860" two-bar vertical obliterator.  This cancel is not in Parmenter but similar two and one bar cancels for Weston-super-Mare are described in Parmenter as probably being locally made wooden handstamps. 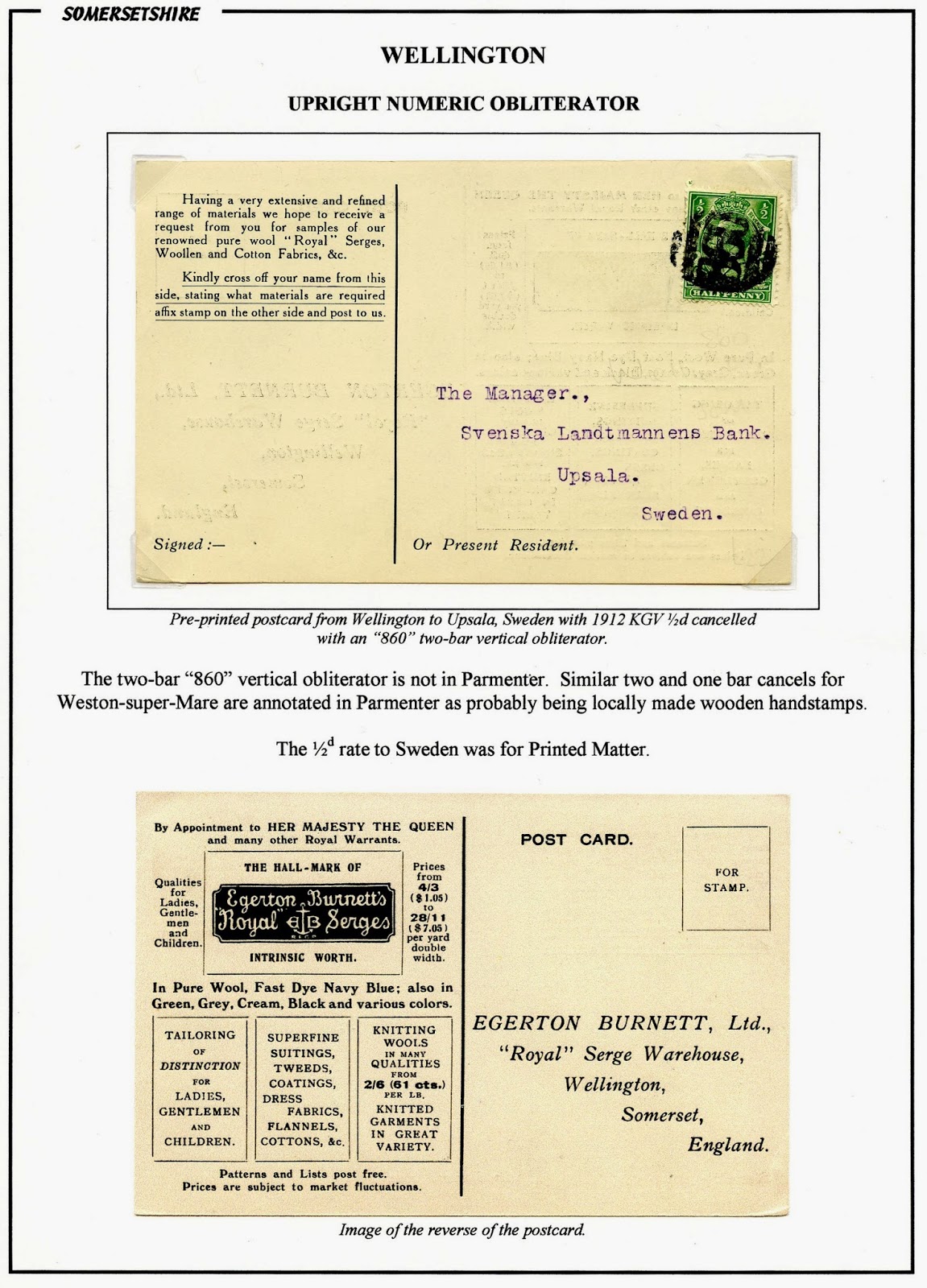 A nice clean wrapper from March 1842 with a crisp South Petherton Maltese Cross. 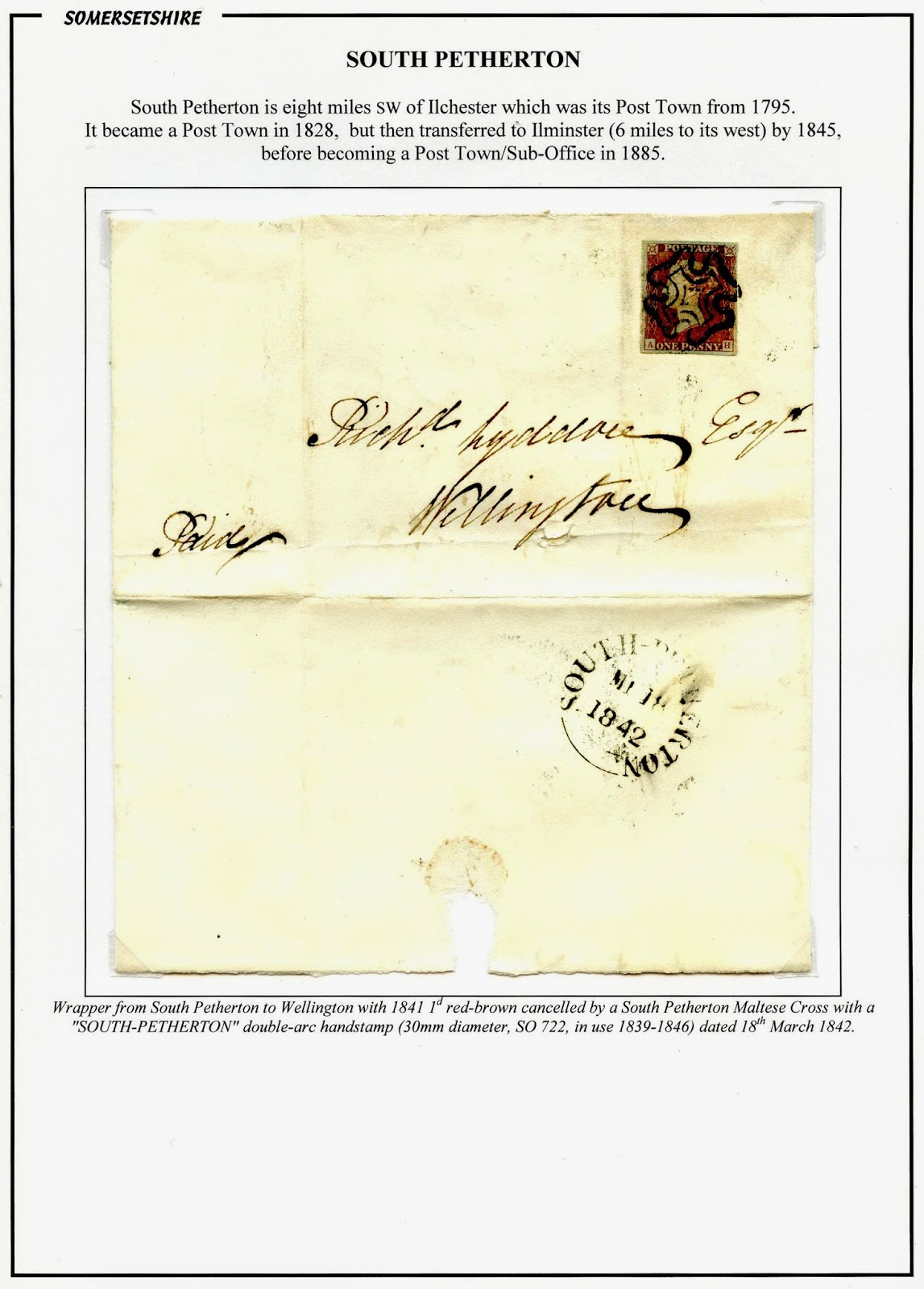 Somerton to London redirected to Sussex

Prior to 1797 the legs of a journey via London were charged separately so giving rise to a total postal charge of 7d - after 1797 the postal charge was based on the total mileage, but the mileage rates also increased so the total charge would probably have been the same. 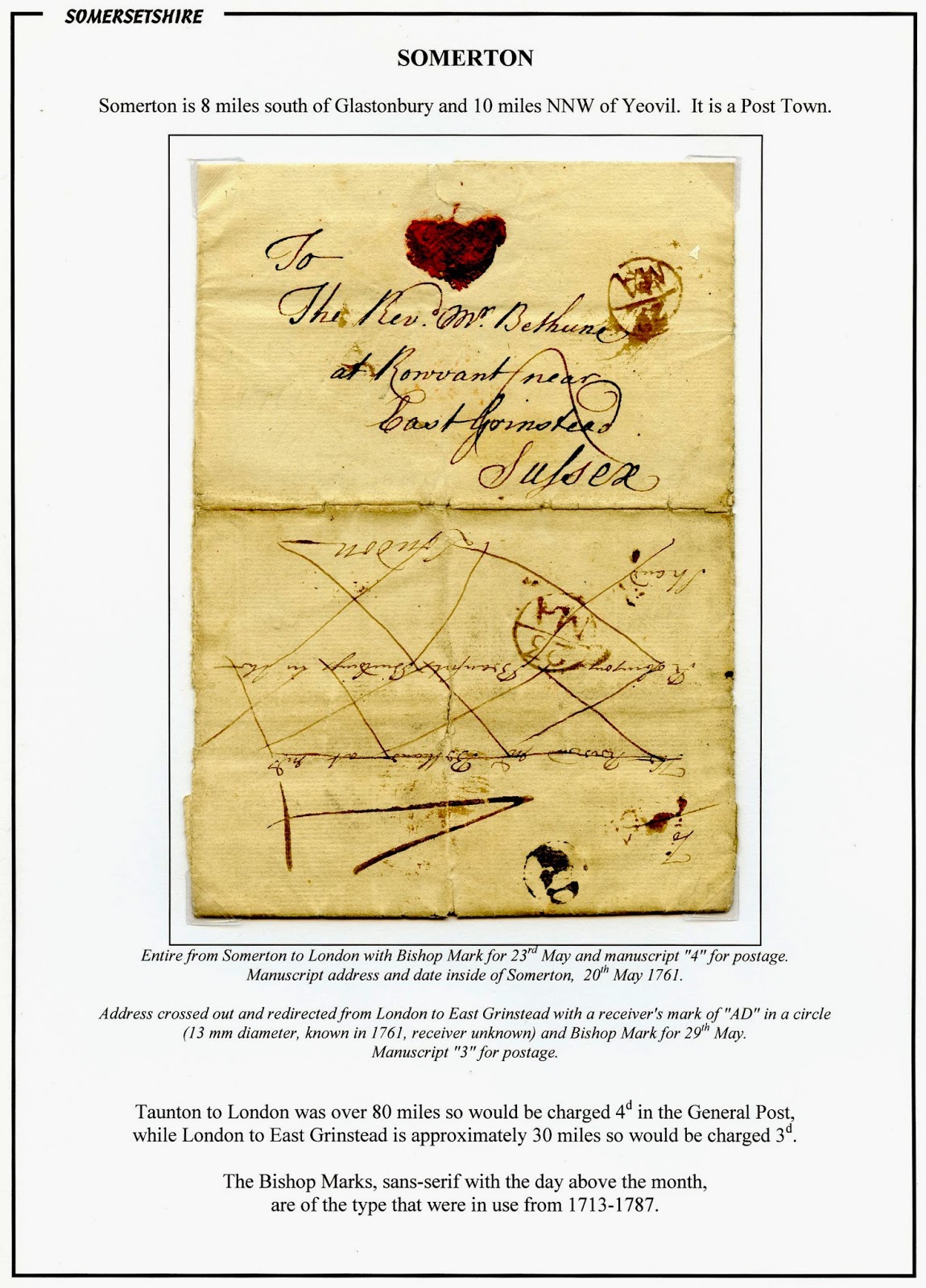 Here is a Free entire from Glastonbury to London which was initially going to be charged 5d but then received a London "FREE" handstamp and had the postal charge crossed out.  It has a nice two line "GLASTON / BURY" handstamp on the reverse. 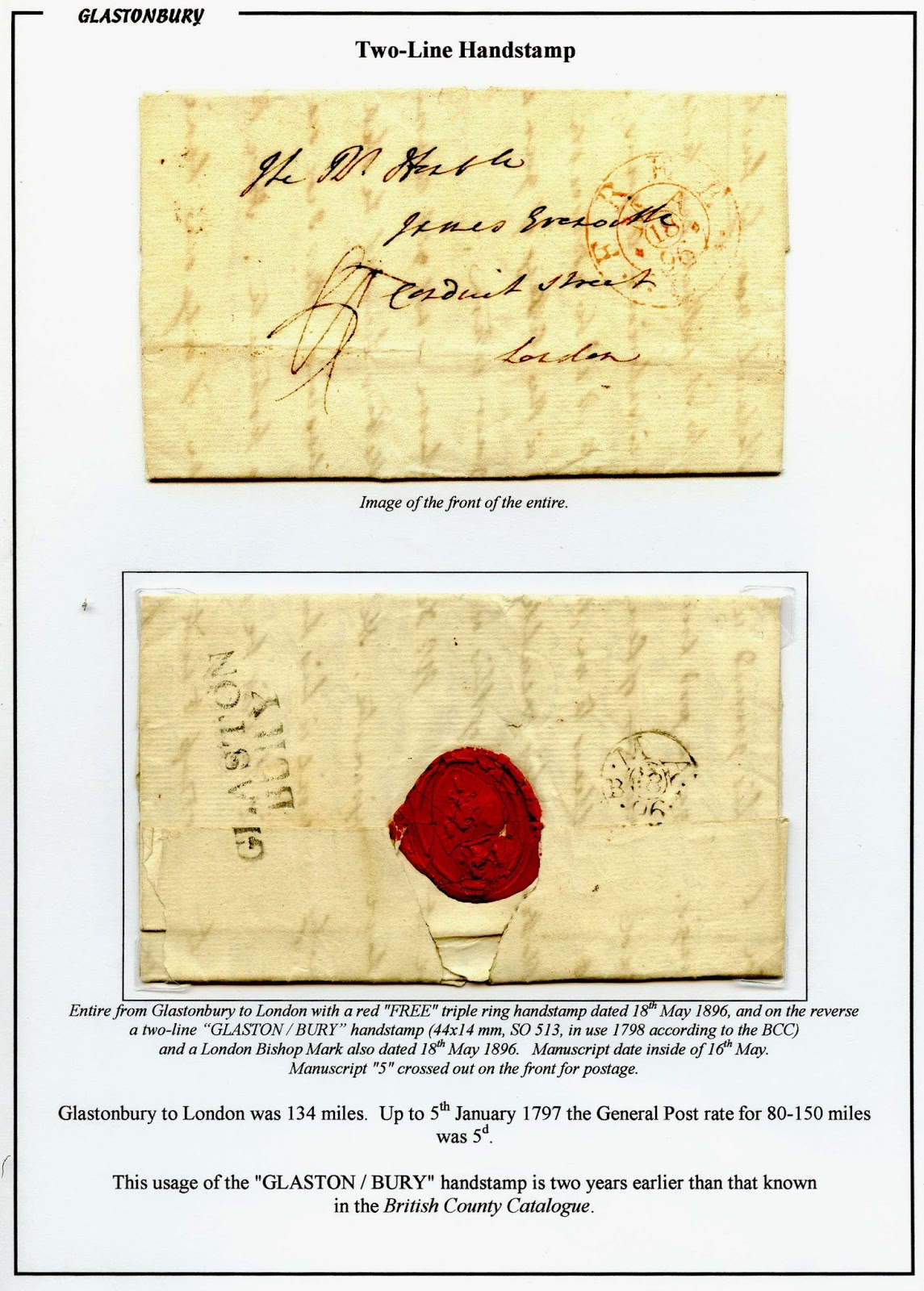 An entire from Ilchester with an 1841 1d red-brown just about tied with an Ilchester Maltese Cross. 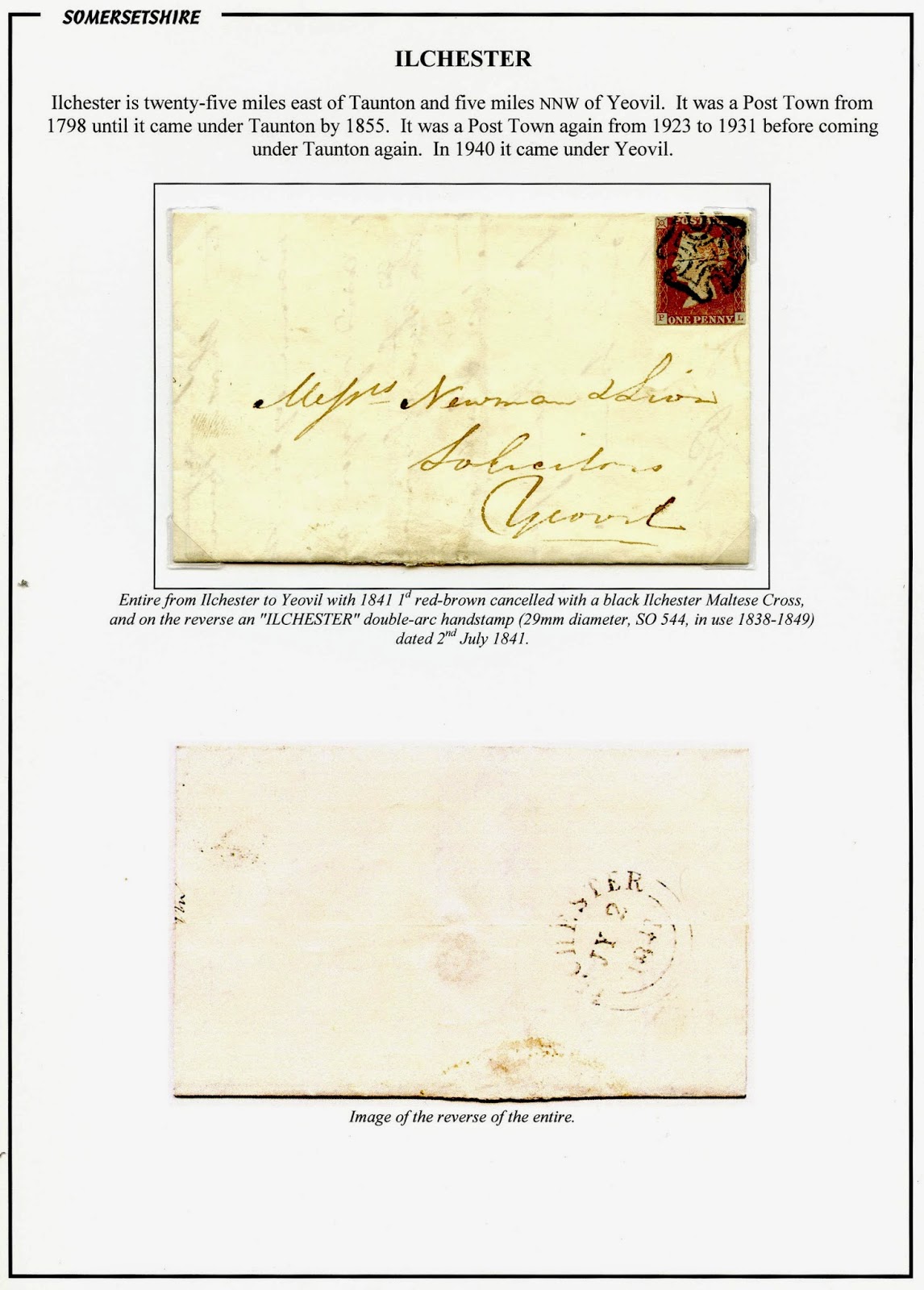 An entire from Milverton to Dulverton with a clear script "Milverton" handstamp. 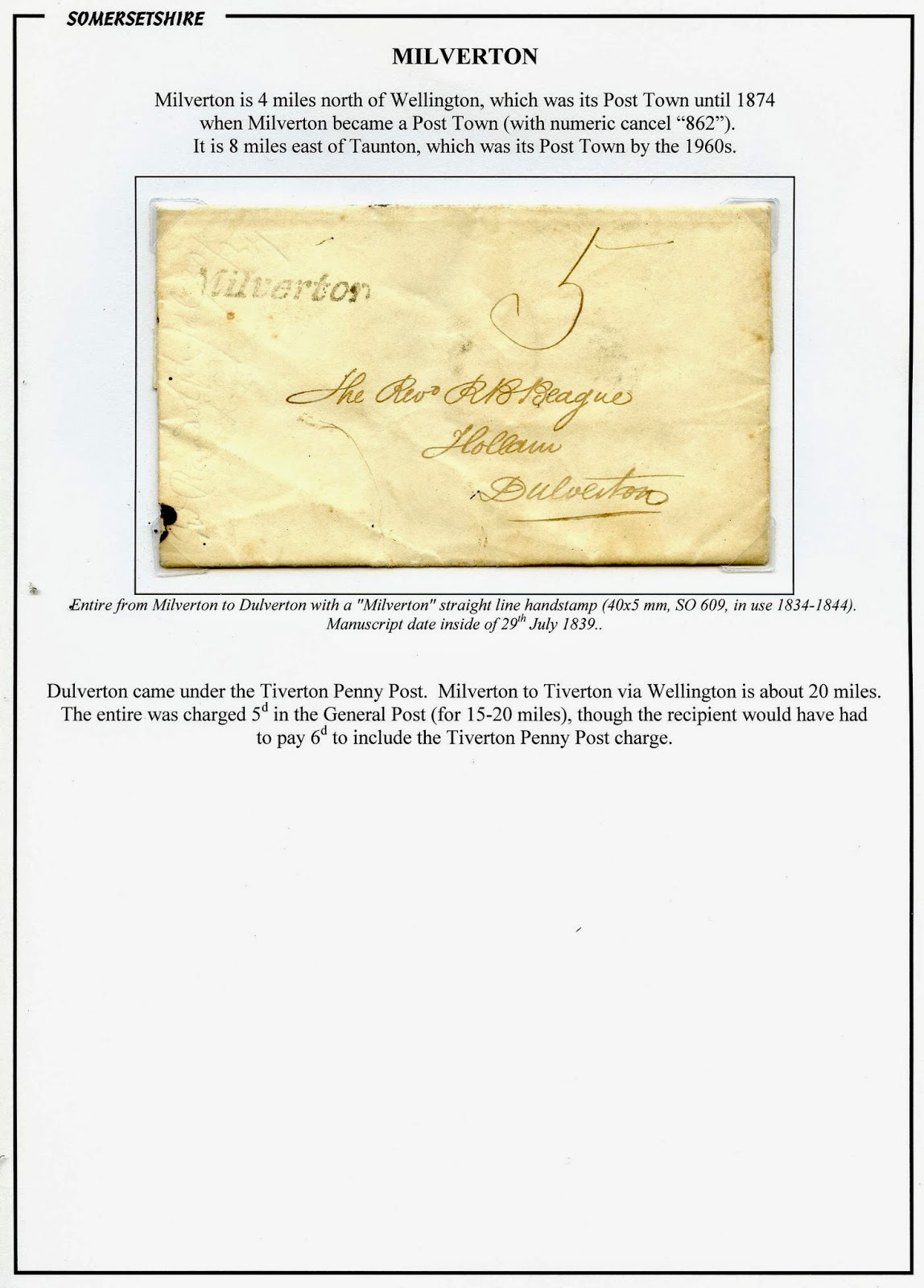 The entire below was from Gosport to Dulverton.  Dulverton came under Tiverton in Devon but this entire was missent to Crewkerne instead where it received a manuscript "Missent to " followed by a Crewkerne mileage handstamp. 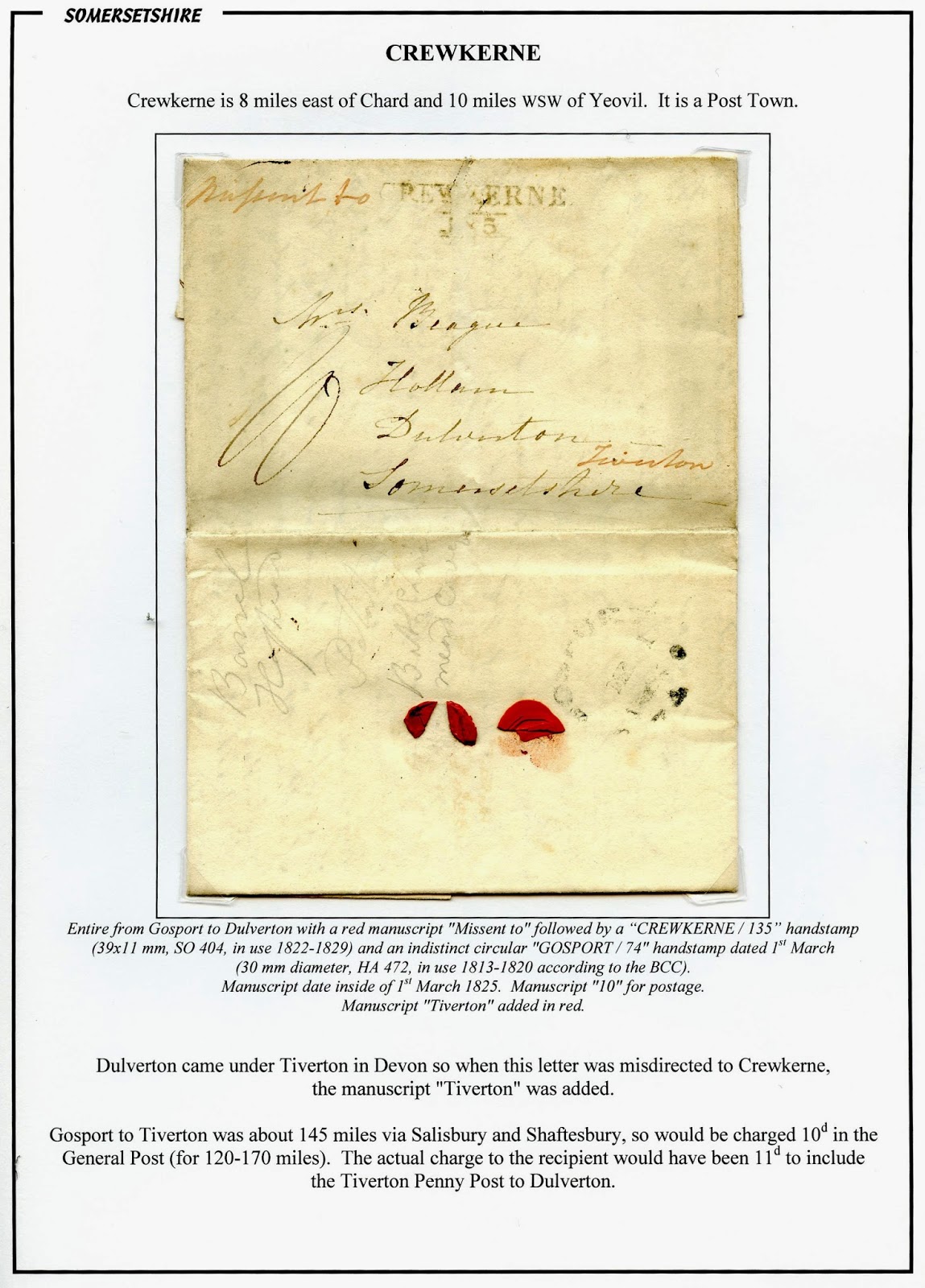 The manuscript charge on the entire is "10" but the recipient would also have had to pay for the Tiverton Penny Post.
Posted by Leamphil at 08:00 No comments:

Email ThisBlogThis!Share to TwitterShare to FacebookShare to Pinterest
Labels: Crewkerne

Three entires from Bath, the first from 1720 has had the surname of the addres cut out but the early "BATH" handstamp is quite clear.  The date written inside the entire is 1720, before Great Britain adopted the Gregorian calendar in 1752. 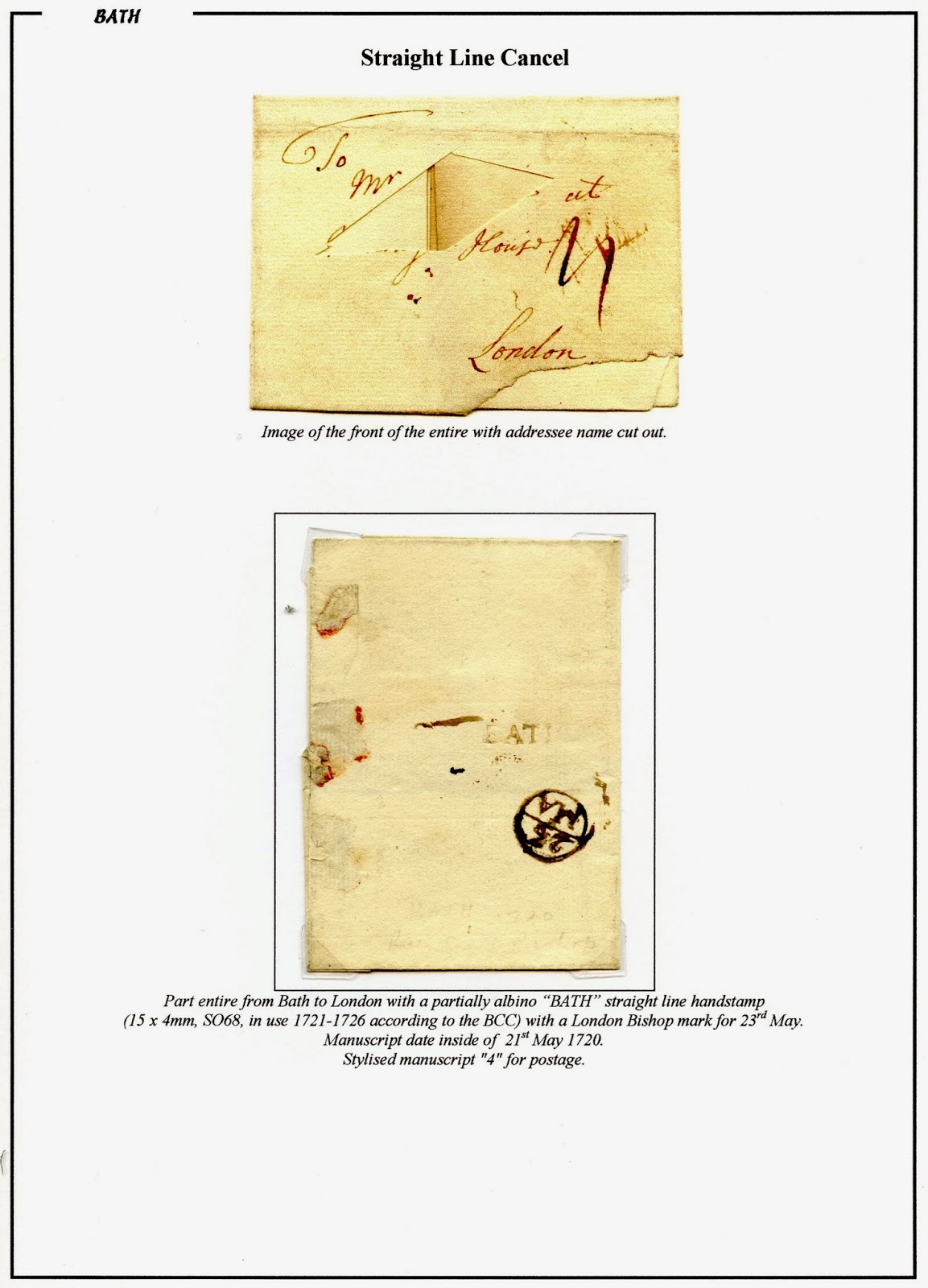 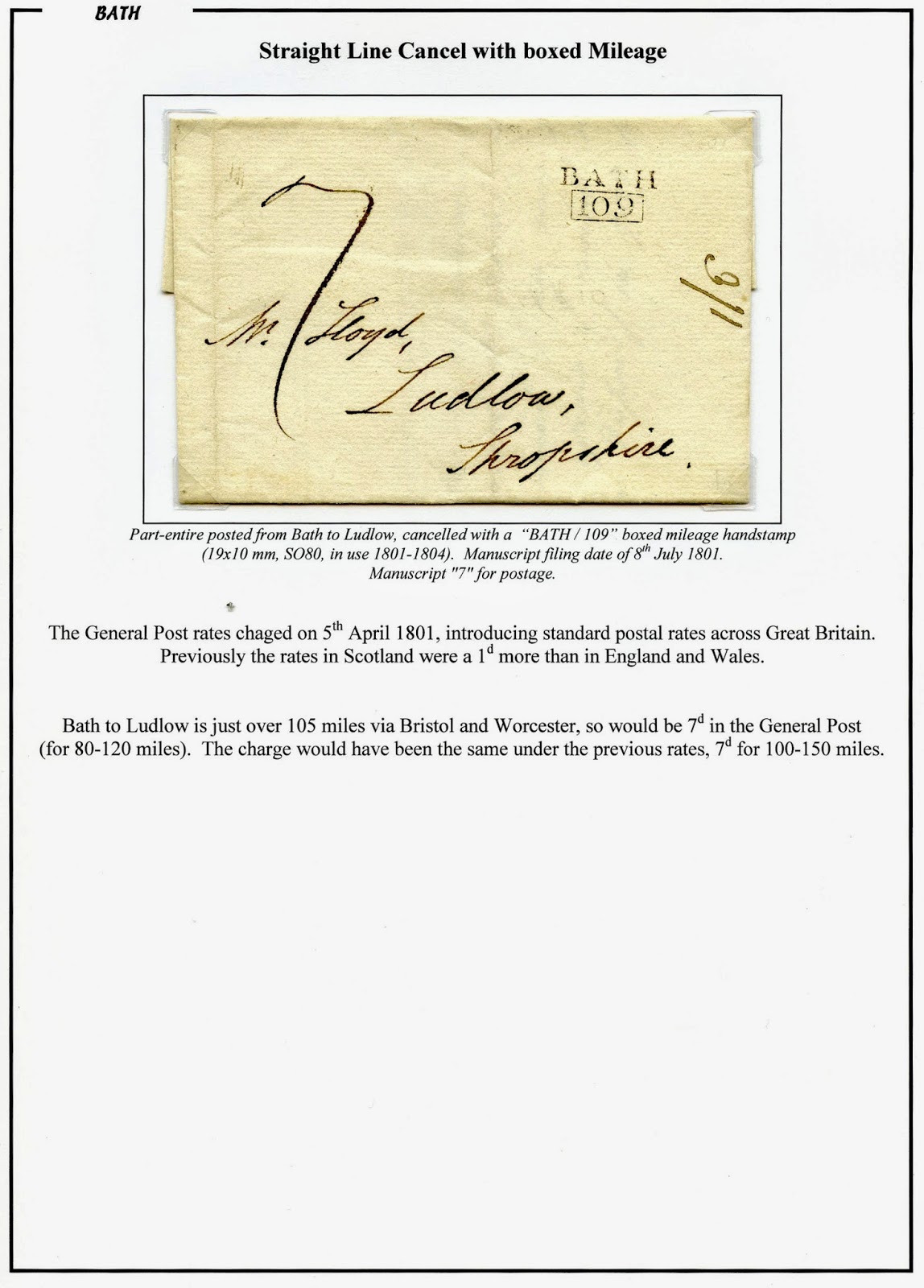 And finally a "BATH" vertical oval duplex cancel from 1877.  It is difficult to work out which specific handstamp these duplex cancels are. 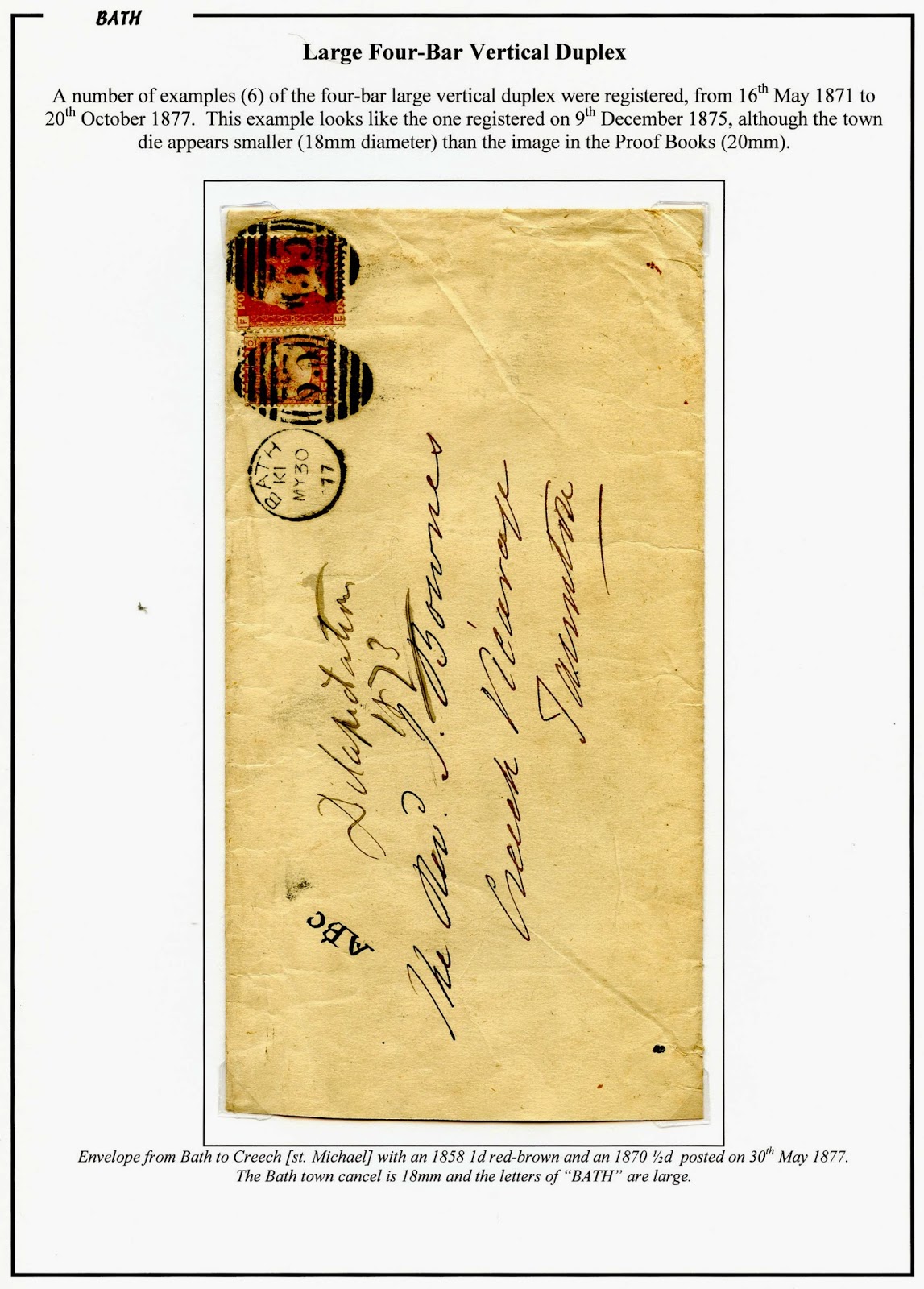