A couple of fairly recent acquisitions from the 18th century  (one has to make some really tricky decisions doing this, for example whether one put them in alphabetical or chronological order !). 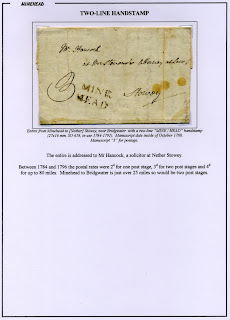 And then an entire from Bath to London from 1792, charged 10d, which was the double rate, as it had an enclosure. 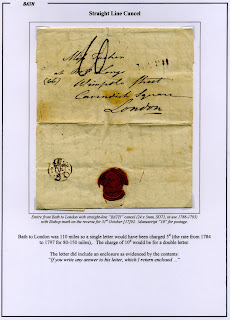 The other set of maps I scribbled were the extents of the different Penny Posts across Somerset.  What I've ended up doing is taking the individual Penny Post maps and superimposing them on an image of Greenwood's map of 1821/29 of the Turnpike Roads in Somerset. 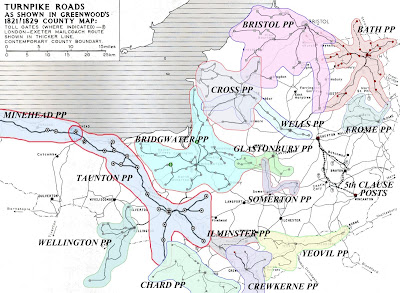 The superimposition is not exact and I may have another go at it - one wants the detail in the modern map to find the position of the Receiving Houses etc. but the road network as it was in the 1830s, so it is not straightforward to do.

The other thing that is needed on the map are the main Post Roads.  One should probably also add the Penny Posts from Post Towns outside Somerset that served towns inside Somerset (eg. Tiverton in Devon, Sherborne in Dorset).

It's also a bit of a muddle from a time perspective - not all the Penny Posts ran to their full extents at the same time ... but I found it fairly illuminating on the relationships and boundaries between the Penny Posts.
Posted by Leamphil at 07:00 No comments:

Taking Stock - and some Maps

It's now just about two years since I started this blog.  In that time I've managed to work my way through the larger places in Somerset (and those with the older postal history), at least those places that I have material for.

After a brief diversion onto some maps that I've "scribbled", I shall start working my way through the smaller villages in Somerset, those with UDC, Climax Rubber or CDS (double circle double-arc) cancels - with brief forays back into the older postal history of Somerst as I get any new (old) material.

Now for a few maps I've "scribbled" to do with Bath.  There is a site, www.scribblemaps.com, that allows one to scribble on maps - when I started playing with the site it was free, but there is now a $5 charge per month for the Pro features (I managed to get most of what I wanted to do done before the charges came in).

One thing I used the site for was to plot out the extent of the postal service managed out of Bath for:

Here are the series of four maps, to the same approximate scale.  Where there is a number in a circle, that indicates that there are that number of points there, within the scale of the map. 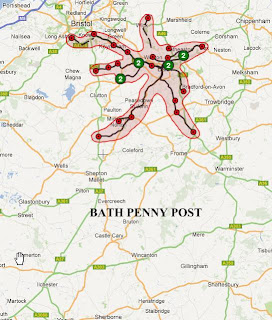 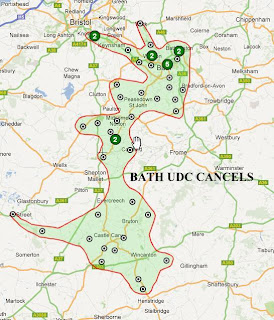 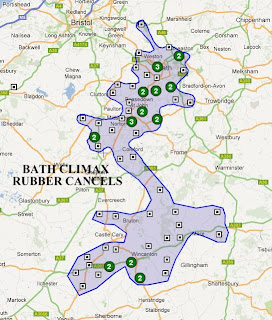 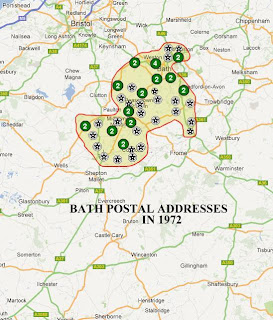 It is interesting to see that the area managed by Bath expands after the Penny Post period, staying approximately the same for UDCs (mainly 1844-1857) and Rubber Climax handstamps (1885-1933), and then shrank back, so that by 1972 the area served from Bath was similar to that in the Penny Post period.
Posted by Leamphil at 07:00 No comments: 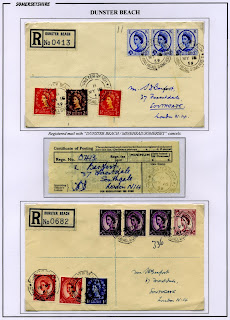 St. Audries Bay was open April to September from about 1949 to about 1973.  Here is another philatelic example from 1959. 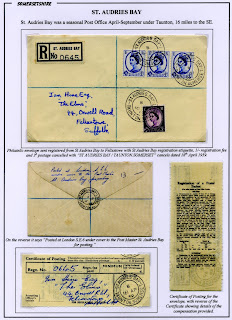 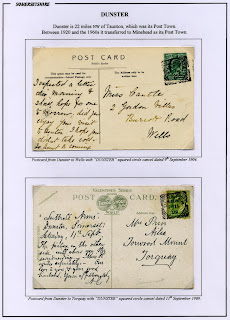 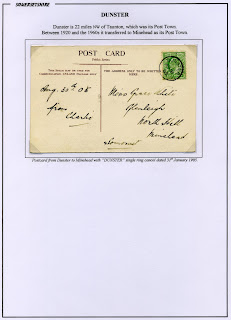 ... and then double circle double-arc cancels. 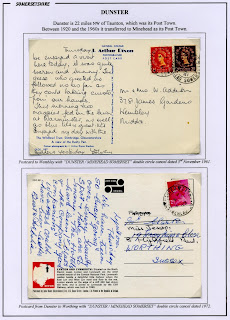 Finally a special commemorative cancel for the "COASTLINE DUNSTER MINEHEAD". 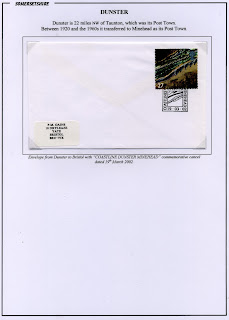 Firstly an introduction from The National Gazetteer of Great Britain and Ireland of 1868. 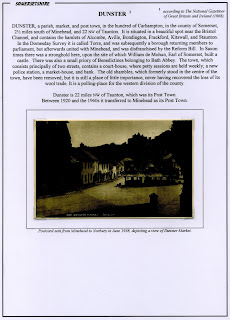 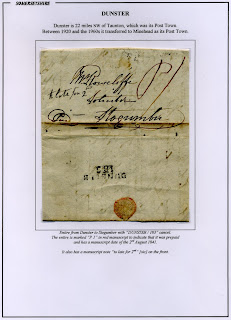 Here are a series of handstamps (and cancels) - the Dunster UDC in a serif font (more on this handstamp in a later post), the "778" numeric obliterator and the Dunster double-arc dated handstamp. 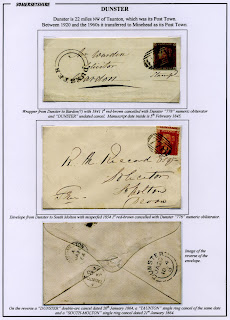 Another (fainter) example of the Dunster UDC. 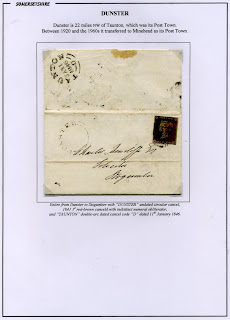 And again the "778" numeric obliterator with the double-arc dated handstamp. 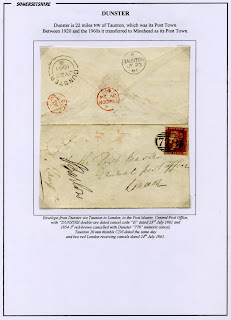 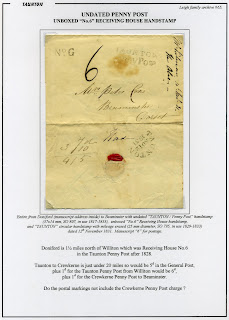 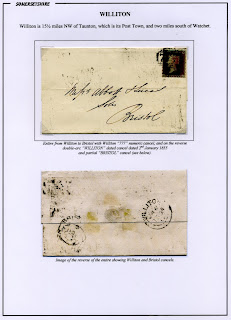 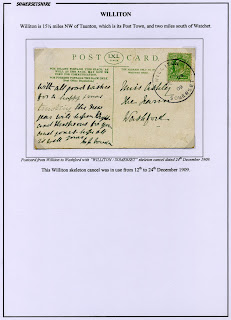 And finally a selection of double circle couble-arc cancels from 1933 to 1974. 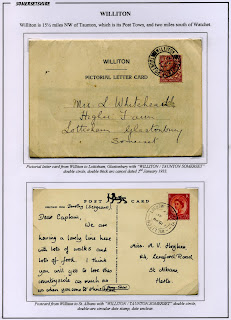 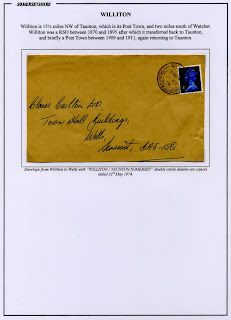 Email ThisBlogThis!Share to TwitterShare to FacebookShare to Pinterest
Labels: Williton

A selection of items with Radstock postmarks.  Firstly some Radstock "358" vertical duplex cancels (the envelope is from Stuckeys Banking Co. as can be seen from the scan of the reverse) ... 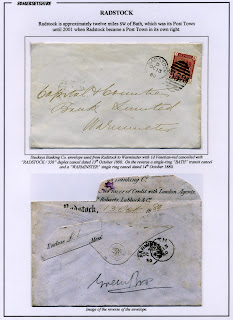 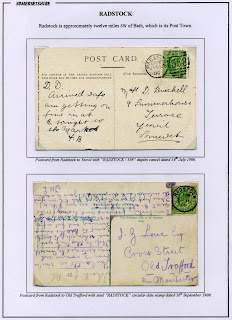 An item with some interesting marks ! 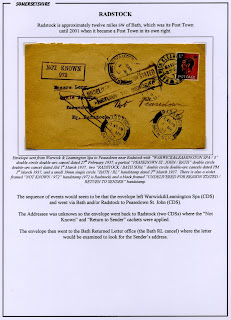 A couple of special commemorative cancels. 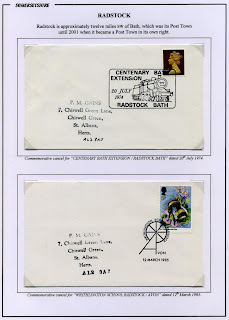 Email ThisBlogThis!Share to TwitterShare to FacebookShare to Pinterest
Labels: Radstock

Here is a registered envelope from Yeovilton (the address on the back says R.N. Air Station) from 1947. 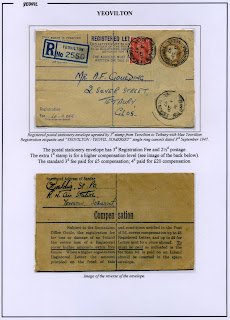 Some special commemorative cancels associated with the Royal Naval Air Station at Yeovilton. 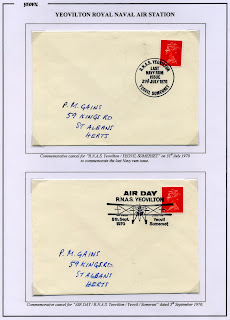