Finally, to bring the year to an end, here are the last Bath National slogan cancels I have before the introduction of decimal postage.  The first cancel "Remember to use the Postcode" was very early, being in 1968, the first postcodes being issued in Norwich.  It wasn't until 1971 that postcodes were put into general use and people started to get informed of what their postcode was.

These are also the first two National slogan cancels I've shown that are in transformed format - the town cancel is over the stamp while the slogan is in the middle of the envelope.  Local publicity slogans had been in the Transposed position since 1963 (more on this next year !). 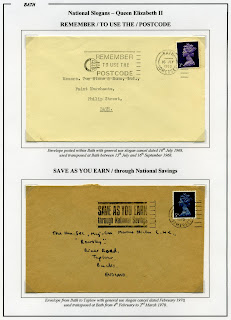 From 1959 Charity appeals appear as slogan cancels.
This first one, for World Refugee Year was rapidly withdrawn - if the stamp was (in-)correctly placed one got an unfortunate image of the Queen with her hand to her face. 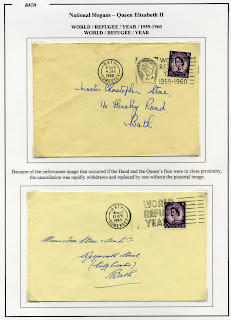 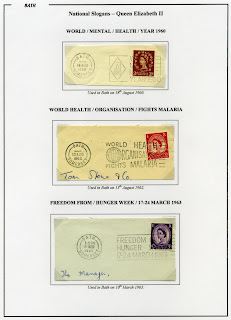 Both sheets contain entires from Wincanton to Wells, the first in 1824 and the second in 1829, both with postage charges of 10d from Wincanton to Wells, being made up of 1d in the 5th Clause Post from Wincanton to Shaftesbury plus 9d in the General Post (from Shaftesbury to Salisbury, Bath and to Wells being about 85 miles).  If the post had gone via Shepton Mallet the charge would only have been 1d for the 5th Clause Post plus 4d in the General Post (from Shepton Mallet to Wells being six miles) or 5d in total. 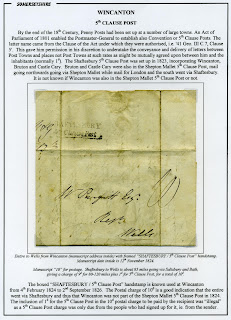 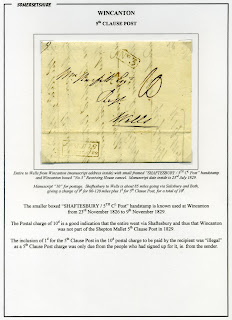 Posted by Leamphil at 19:01 No comments:

From my collection of items associated with the Mulready cover, here's a facsimile in red that was posted as a Christmas card.  The message inside was from W.V. Morten, a former postal worker.  Very little is known about W.V. Morten himself, other than his complete devotion to the postal service, studying and collecting things on every aspect. 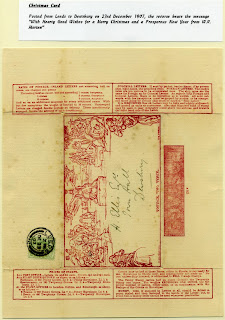 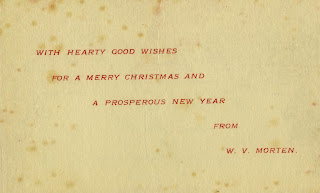 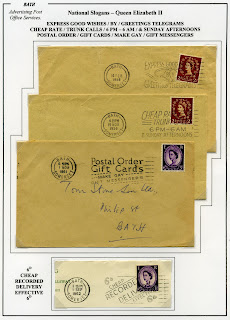 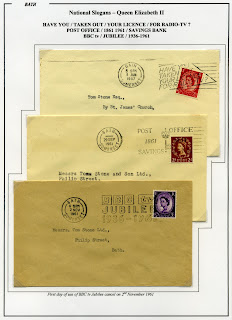 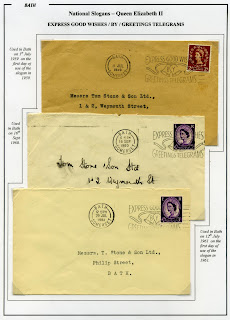 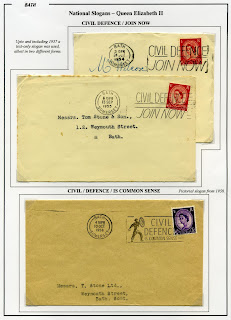 For future reference, note how crisp and readable the slogan cancels are !
Posted by Leamphil at 08:00 No comments:

How did the postmasters get their horses back if they provided horses ? Who looked after the horses (eg. feed & stabling) when the messenger had finished the stage (normally 15 to 20 miles) and got a fresh horse from the next postmaster ?

What did the messenger do when he’d handed the mail over to the next messenger ? Did he just set off back to where he came from or did he wait for a post coming the other way ? If so where did he stay, who paid for his meal (& his horse’s feed & stabling) ?

Was all of this covered in the contract that the postmaster signed, and if so what were the details ? Have any contracts survived ?

One possibility is that the horses for the post messengers were basically pooled - that the postmasters took a horse in and provided a fresh one, so that they did not keep ownership of specific horses - if so that seems a recipe for the provision of cheap (& not necessarily good) horses.

The provision of horses for people who wanted to ride post would have to have been handled differently. There were standard rates for the provision of such horses, eg. 3d a mile, with mention of a separate rate for a guide (4d per stage). Was a guide obligatory, so that they could be responsible for bringing the horses back after they had been used for a stage and changed at the next post ?

Any answers gratefully received !
Posted by Leamphil at 15:02 No comments:

To begin with the same Christmas Slogan cancel was used, but in 1960 a new pictorial cancel was introduced. 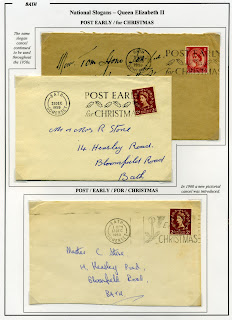 A couple of campaigns firstly to get people to use the correct address (this was before the introduction of the Post Code which happened after october 1965.  The second sheet is trying to get people to buy stamps in booklets. 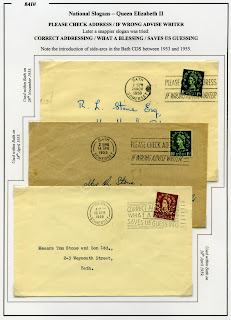 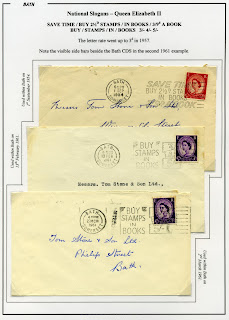 In the early part of Queen Elizabeth's reign, the use of slogan cancellations continued as before - for national campaigns, postal matters, and for national exhibitions.
Here is a long running campaign to get people to register for the voter's list, followed by a shorter-term one to get people to use the correct postage to Europe after the postal rates had gone up. 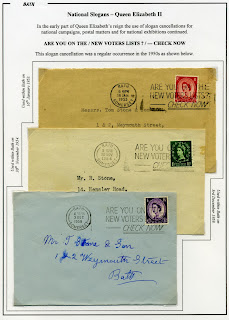 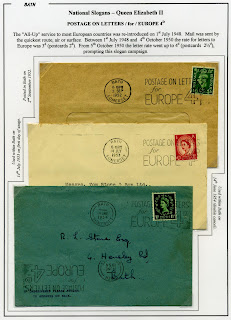 According to "A List of Post-Towns and Principal Places with the Postage of a Single Letter to or from London according to the Actual Routes of the Post" published for His Majesty's Stationery Office in 1830, the postage in the General Post from London to Castle Cary should be as follows (see scans below):
This indicates that at least by 1830 the correct postal rate in my previous post should have been 9d - so why were some letters charged 10d between the middle of 1825 and 1827 ?  If you have any examples of letters from London to Castle Cary in this period (1824 to 1830) please let me know what they were charged. 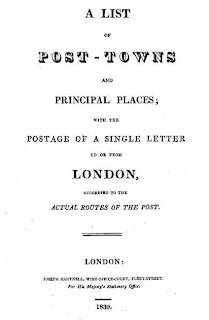 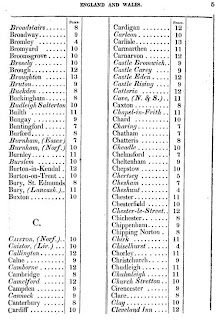 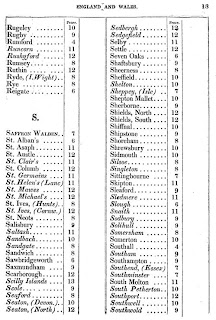 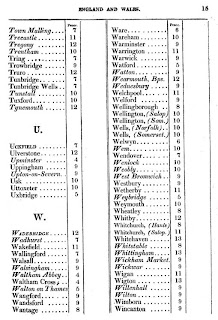 Just to stop any campaigns for reimbursement, this was in the 1820s.

First some background.  In the early 1820s Castle Cary became part of two 5th Clause Posts, one from Shaftesbury (for mail from the south and London) and one from Shepton Mallet (for mail to the north. 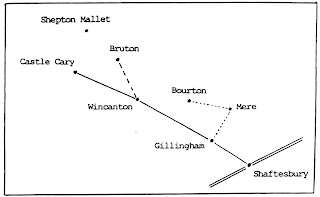 The map above shows the route for the mail that came via Shaftesbury which is the route that this relates to.

A 5th Clause Post was so-called because it was enacted in the 5th clause of the Act of George III, Cap. VII in 1801, and allowed the Post Office greater flexibility in setting charges to cover the expense of establishing local posts. The postal charge for the local post could be set by agreement or 'convention' with the local inhabitants, who agreed to cover any deficiency between the revenue coming in from the local post and the costs going out.

I've been reading up about this in the Somerset & Dorset Postal History Group Journal, where there is a whole article about the intricacies of the post and the different handstamps.  I then found another article about the Castle Cary Penny Post handstamp, which seems to have been used sparingly between 1824 and 1827 (just after the 5th Clause Posts had been set up).  This second article had details of 5 entires with this Penny Post handstamp - including the postage charges.

All the entires were from London, the postal rates did not change over the period, so you would expect the charges to be the same (or double or triple for double or treble letters).  Well, they weren't. The table below shows the details of the entires, with the postal charge in the right-hand column.

One would expect the mail coming from London to come to Shaftesbury in the General Post, and the charge for that is what you'd expect to see on the front of the entires.  Shaftesbury was deemed to be 104 miles from London (it had a mileage handstamp "Shaftesbury / 104").  Between 1812 and December 1829 the rate for 80-120 miles was 9d. so that is what one would have expected to see.  The London postal clerks would not know any details of local postal matters like the 5th Clause Post so there wouldn't be any charge for that included.  It would be up to the Castle Cary Receiving House to get the money for the postage from the recipient, and they would demand the extra 1d for the 5th Clause Post then.

The first two entires in the table above show this postage charge, 9d for a single letter and 1/6d for a double letter (one with two sheets of paper).

So, did the post route to Castle Cary change from via Shaftesbury to via Shepton Mallet ?  Or did perhaps the time of day a letter was posted determine which mail coach was used ?  If this was the case the inhabitants of Castle Cary were at the mercy of the Post Office as to what they got charged for a letter.
My second thought on looking at the postal rates is that there is alternative explanation for the higher charges seen on the later three entires, that it was due to human error.
It appears that before the 5th Clause Posts were introduced that Castle Cary was a Post Town, and based on its mileage handstamp was deemed to be 145 miles from London.  The postal rate for 120-170 miles was 10d. and this appears to be what the last three entires were charged (or 1/8d. for a double letter).  Did the London Post Office clerks for the later entires remember Castle Cary at 145 miles from London, and calculate the charge should be 10d. ?  ... rather than looking up Shaftesbury and doing the first calculation ?

Thus out of a sample of 5 entires, 3 (60%) look like they were charged more than they could have been, by 1d. or 2d, perhaps because they went the long way, via Shepton Mallet, or just perhaps because a Post Office clerk was working the charge out based on old postal routes.
Posted by Leamphil at 08:00 No comments: