Castle Cary became a Railway Sub-Office in 1898, and then a Sub-Office / Post Town on 1st August 1905 when the Post Office stopped using the R.S.O. terminology.

In 1920 it came back under Bath, having previously been under Bath before becoming an RSO in 1898.

The postcard below extends the known usage to October 1921, from after when Castle Cary moved back under Bath, and when it should really have been "CASTLE CARY / BATH". 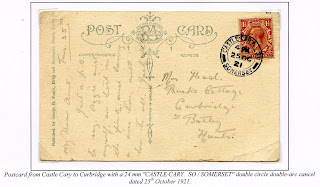 This cover from Bath to Reading in April 1861 has a nice "MORE TO PAY / OVER   OZ" cachet and a manuscript "2" with initials. 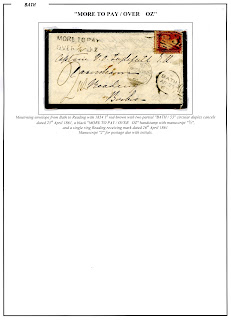 This next item was addressed to Clifton from Bridgwater in May 1883 but has a manuscript "Not Known" with initials.  The contents are a notice regarding the Somersetshire Drainage Act of 1877. 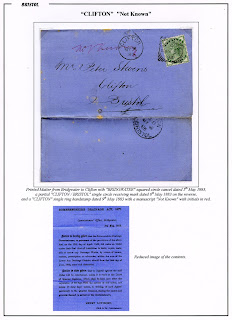 This next item from Weston-super-Mare to Cork in June 1942 was insufficiently paid and was censored.  The Examiner has taken the trouble to write "The" on the censorship seal where it overlaid the original address. 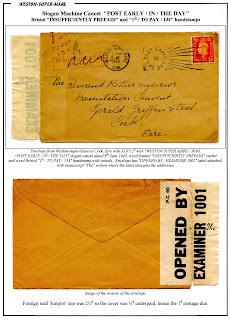 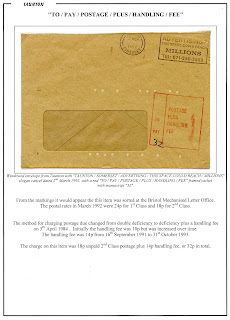 Email ThisBlogThis!Share to TwitterShare to FacebookShare to Pinterest
Labels: Bath, Clifton (B), Not Known, Postage Due, Taunton, Weston-super-Mare

A couple more UDCs - Cheddar, Widcombe, both in Brown 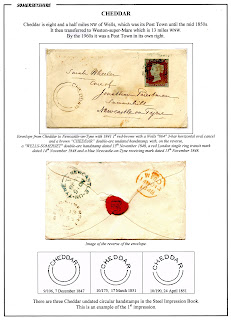 And here is an example of the first Widcombe UDC, issued on 2nd November 1844 under Bath, here used on 24th January 1847 in brown. 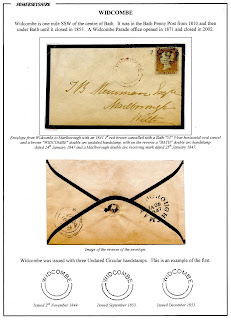 In 1839 new types of village Penny Post handstamps started to be introduced (just in time to be made unnecessary with the introduction of the uniform penny post).  Five such handstamps were introduced under Bristol - Brockley, Knowle, Redland, Westbury-on-Trym and Whitchurch.  The handstamps were used for approximately ten years. 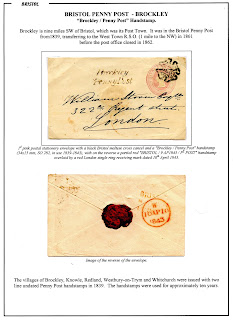 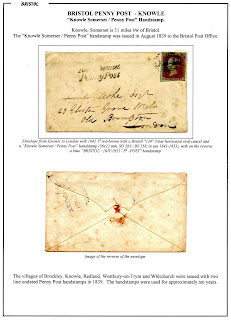 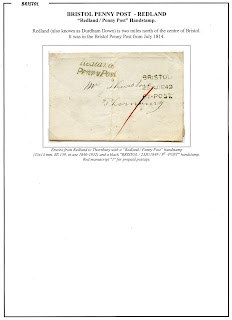 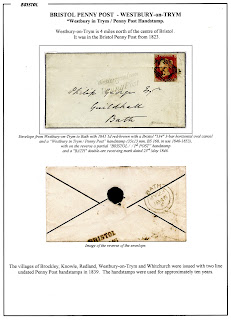 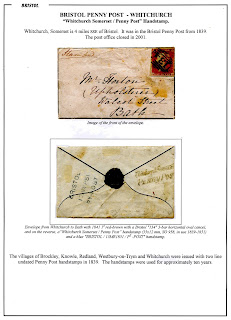 Here are three Maltese Crosses, starting with a red MX from Glastonbury in January 1841, unfortunately somewhat blurred and unclear. 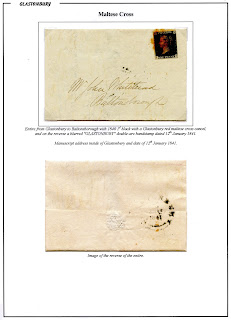 Next a nice crisp black MX from Langport in December 1842. 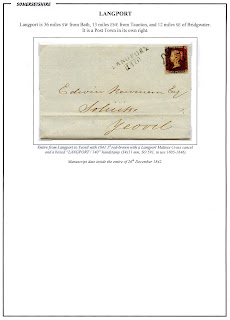 And finally a good black MX from Wells in January 1842. 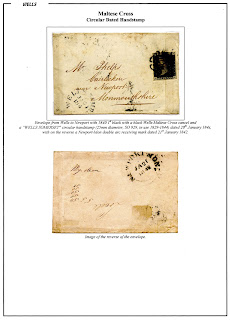 A couple of Free franks, starting with one from Ilminster to Chard franked by "Poulett" in November 1828 ... 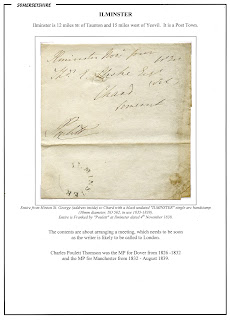 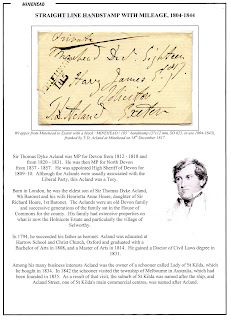 Staying with Minehead, here is a very poor Maltese Cross from July 1841. 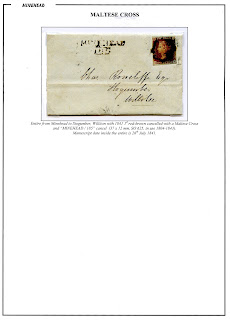 This next item is from South Petherton (which must have come under Somerton at the time) in December 1806. 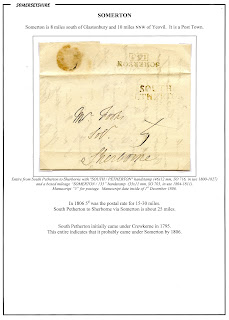 And finally a poor Somerton mileage mark from June 1827. 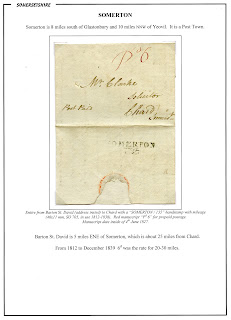 Weston-super-Mare had the boxed "No.2" receiving house handstamp in the Cross Penny Post.  Here is an example from September 1831. 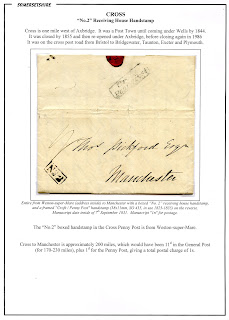 Dunster had the boxed "No.4" receiving house handstamp in the Taunton Fifth Clause Post up to 1828 (Mr Luttrell of Dunster Castle objecting to any conversion to Penny Post because he would then have to pay for his newspapers' delivery in the post).  This example is from April 1825. 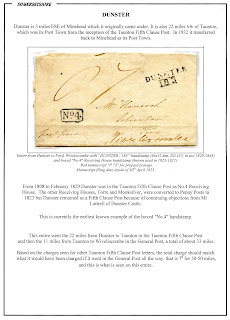 Here is an example of the Dunster undated circular handstamp from August 1846 with the date written in manuscript inside the handstamp. 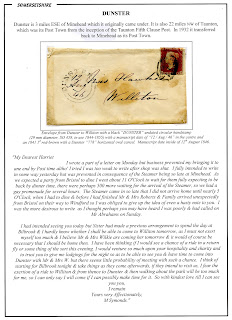 This pre-printed insturance letter was initially sent to "Wells, Somerset or Stratton near Chilcompton, Bath" and then returned from Old Down to London in July 1830. 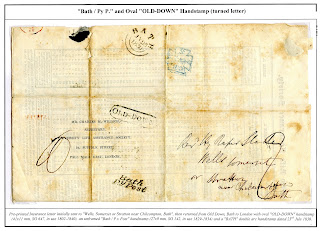 This fairly common "CHARD / 142" handstamp from 1817 has some interesting comments, being instructions to book "a place in the Maid to Chard, no other Coach passes through Chard", with the writer saying that he would meet the coach at "Windowhistle" (now Windwhistle) "if the weather be fine and the lanes passable". 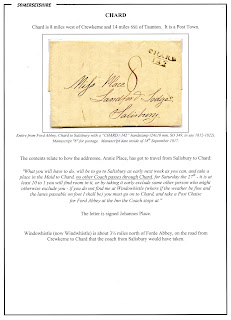 Two examples of another fairly common handstamp, the "FROME / 115" handstamp, from 1825 and 1826.  The first example appears to have been posted on Christmas Day. 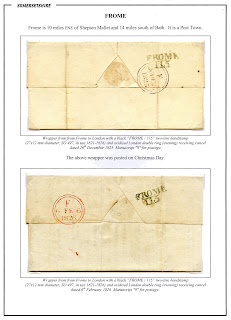 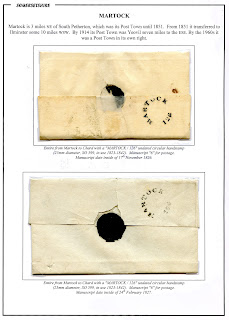