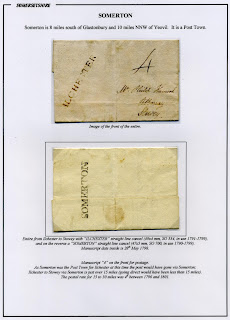 Moving along, the next two handstamps are "SOMERTON / 135" handstamps, fistly with the mileage boxed and then with the box reduced to lines above and below. 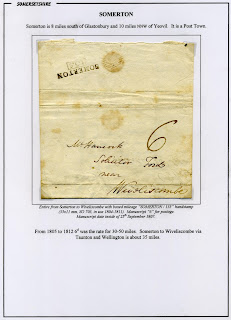 I cannot deciper the postal charge on this second entire - any ideas ? 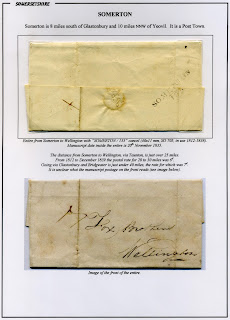 Somerton was the county town of Somerset; see below for a description from Pigot and Co.'s National Commercial Directory of Somerset, 1844. 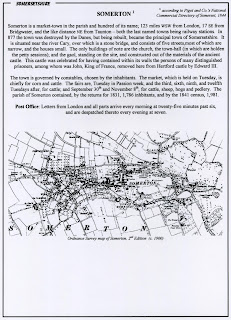 The entire shown below from 1748 has a two line "SOMER/TON" handstamp in use from 1743-82.  The handstamp is also known in red, according to the British County Catalogue.  Although the handstamp is somewhat indistinct, the entire also has a large Inspector's Crown and shows the rate being altered from 8d (double rate) to 1/- (triple rate). 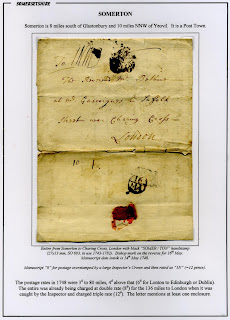 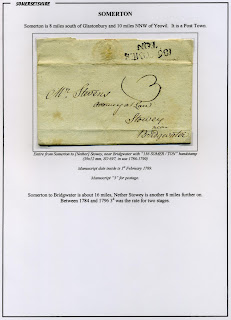 The location of the Receiving House with the boxed "No.7" handstamp in the Cross Penny Post is not known for sure - an example is known used in 1829 from Theale, midway between Wedmore (which had the "No.9" handstamp) and Mark, so it has been postulated in the S&DPHG Journal that it was used in Mark.

In 1843 and 1846 examples of large unboxed "No.7" handstamps are known, all bearing a "CROSS" undated circle handstamp.  It has not been known where this handstamp was used.

An example below that I acquired recently has a manuscript address of Burnham, which was not in the Cross Penny Post (it was in the Bridgwater PP).  Strangely the entire, if actually posted in Burnham, has gone via Cross to Wells (which at this time was the Post Town for Cross) and thence to Bridgwater - definitely the long way round.  The entire talks about sending some forms that were to be printed either via the railway or via the postman.  In 1846, the only railway from Bridgwater was the Bristol & Exeter line that went via Highbridge, just over a mile from Burnham, so this is consistent with the entire coming from Burnham. 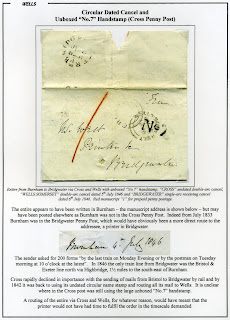 On the basis of this entire I postulate that Burnham was "No.7" in the Bridgwater Penny Post, and that the large unboxed "No.7" handstamp came from this usage (rather than from the Cross Penny Post).  That would explain where the handstamp came from BUT does not explain why the entire might have gone from Burnham via Cross and Wells to Bridgwater, rather than going directly (and much quicker).
Posted by Leamphil at 07:00 No comments: 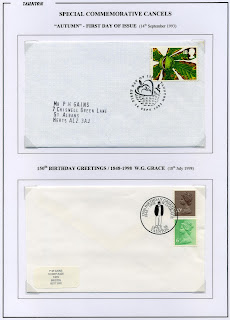 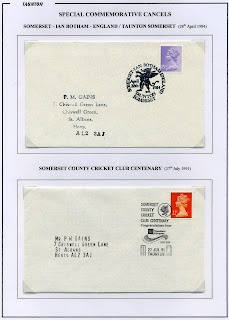 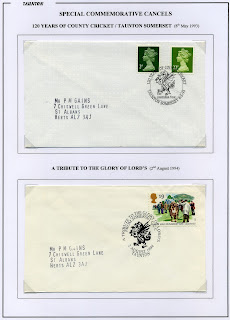 A cancel commemorating the 100th anniversary of the founding of King's College in 1980 (and a postcard illustrating Queens' College). 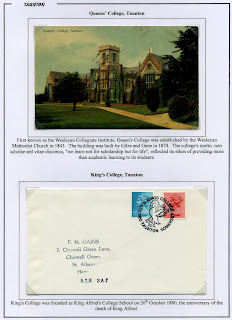 190 years of the Hydrographic Department (1985) and the 900th Anniversary of the Domesday Book with Taunton's Anglo-Saxon name of "TANTONE". 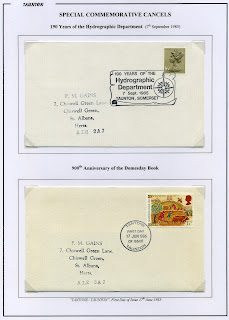 A cancellation from Taunton Philatelic Sales (1985). 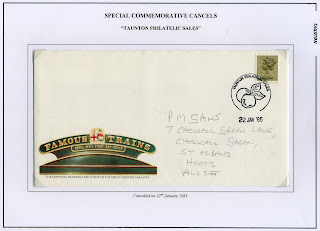 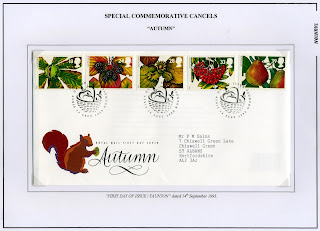 Finally on Taunton, here are a few posts of Commemorative Cancellations for Taunton.  Firstly the Silver Anniversary of the Stamp Club in 1969. 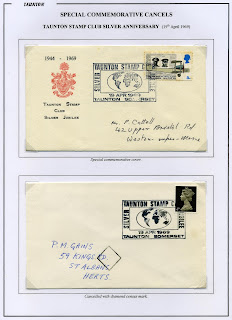 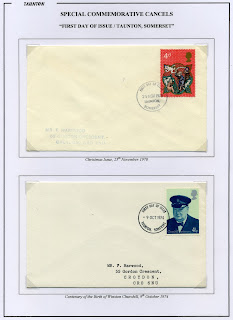 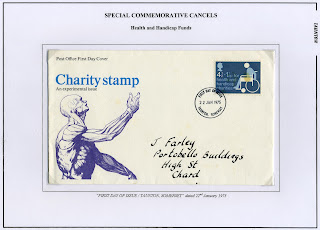 And cancels commemorating the Somerset Jamboree in 1970 and the Post Telecommunications Museum (1976). 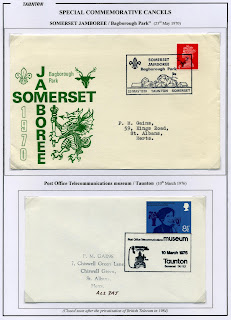 From the mid-1960s until the 1990s, Taunton has had some local slogan postmarks.  The first examples from the 1960s to the early 1970s were promoting Taunton as a tourist and shopping destination. 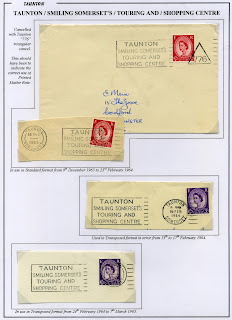 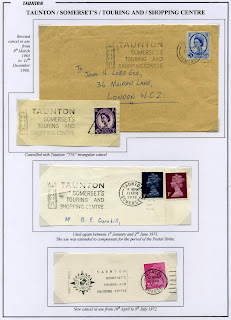 Another potential tourist destination was the Post Office Telecommunications Museum, the slogans running from the mid 1970s to the early 1980s. 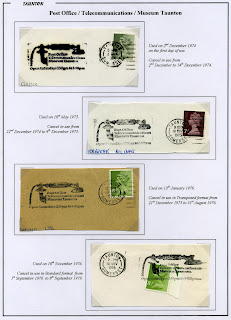 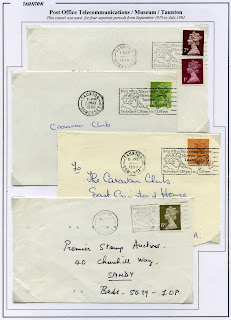 From the end of 1986 to March 1987 there was a slogan celebrating the Somerset County Gazette, a weekly tabloid newspaper. 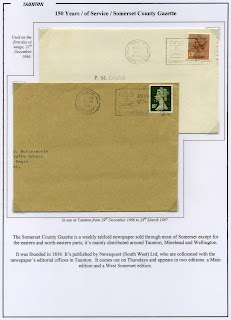 In 1995 there was a slogan cancel promoting King's College Taunton. 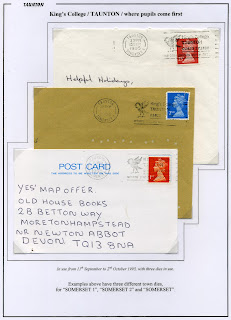 The Somerset & Dorset Postal History Group is gathering information to update its document "The Undated Circular Marks of Somerset and Dorset" by John Millener and Betty Savage, which was published in 1992.

Please email any updates on Types, Colours, and earliest and latest Dates against those shown in the S&DPHG publication (see the Publications page on the S&DPHG website).
Posted by Leamphil at 12:15 No comments:

A couple of maps of Taunton, the first is an early map already shown at a smaller size in my introduction to Taunton. 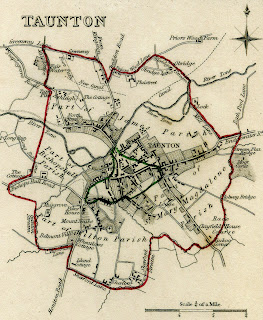 And secondly a piece of the Ordnance Survey map c. 1900. 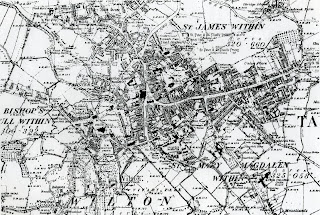 And then a few postcards illustrating Taunton. 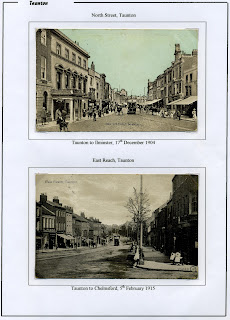 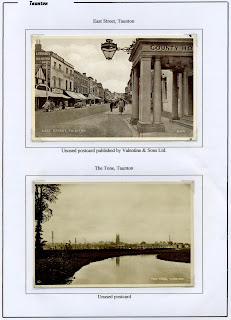 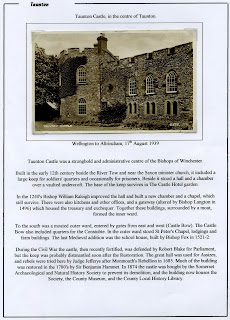