The following sheets show a couple of straight line cancels from Crewkerne - there are a lot more that I don't have examples of. The introduction is from "The National Gazetteer of Great Britain and Ireland" of 1868. 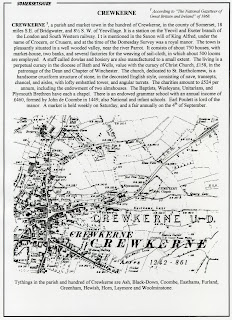 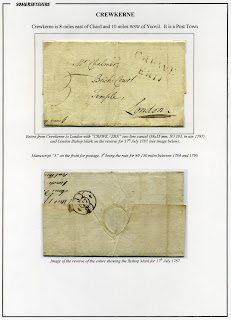 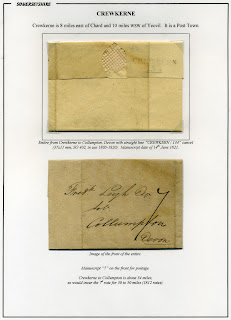 According to Oxley "The English Provincial Local Posts 1765-1840", Minehead's Penny Post was established in 1832 with three Receiving Houses at Holnicote, Porlock and Lynton (Minehead was a sub-office of Taunton).  Unboxed Receiving House cancels for No.2 (Porlock) and No.3 (Holnicote ?) are known, but a "No.1" cancel is not known to have been issued for Lynton.

The wrapper below, from Wellington to Lynton, has a rare manuscript "No 1" on the front apparently for the Lynton Receiving House. 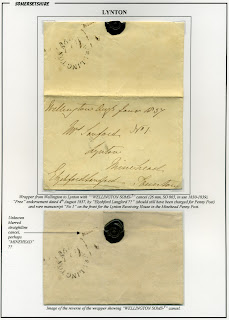 It also has a partial blurred small straight-line cancel on the reverse.  Any ideas ?  From a distance it might just be "MINEHEAD" ?? 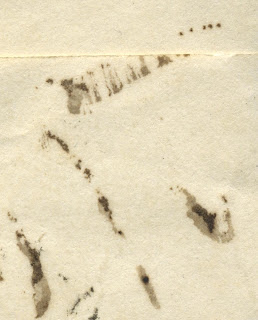 The wrapper has been sent "Free", endorsed on 4th August 1837.  It is signed by "E Ayshford Sanford".  Edward Ayshford Sanford was the MP for Somerset from 1830-1841 and lived in Nynehead Court.  Despite the "Free" endorsement it should still have been charged 1d for the Penny Post as the "Free" endorsement was only for the General Post.
Posted by Leamphil at 07:00 No comments:

Some examples of Chard postmarks after the introduction of the Uniform Penny Post. 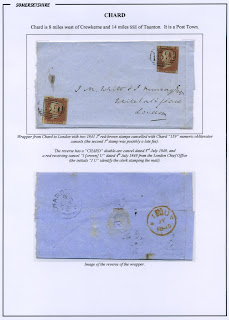 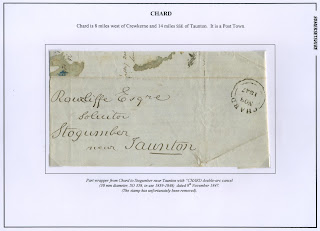 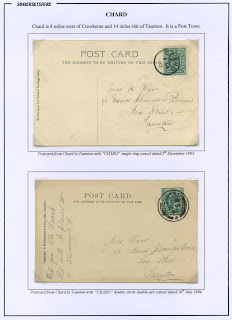 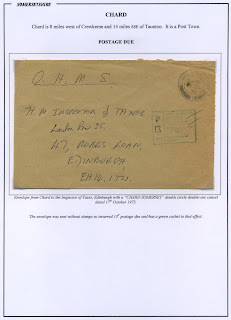 Email ThisBlogThis!Share to TwitterShare to FacebookShare to Pinterest
Labels: Chard

Continuing with the Postal History of Chard, here are some examples of the Chard Penny Post.  The details of the Penny Post are described in this article by Mike Welch taken from the Somerset & Dorset Postal History Group Journal. 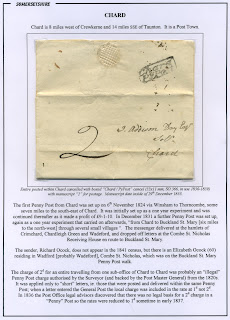 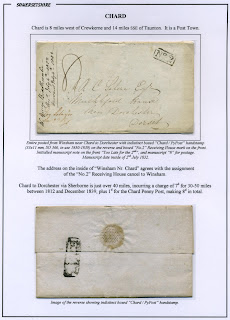 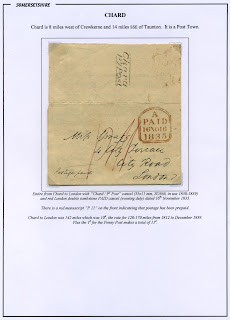 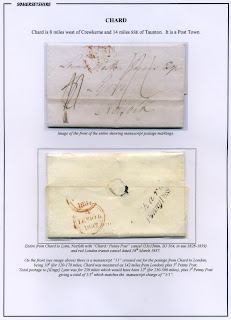 The Somerset & Dorset Postal History Group has just had its 2012 Spring meeting at Hornsbury Mill, Chard where we were entertained by displays on "Devonshire Terrestrial and Maritime Postal History", as well as by a number of short displays by members.  Mention must also go to the fine lunch, which made concentrating in the afternoon session a little harder, and to the pleasant weather.  The meeting was well-attended with over 20 members and guests.

The following sheets show a selection of straight-line cancels for Chard (unfortunately not including the earliest ones from 1762 to 1786).  The introduction comes from "The National Gazetteer of Great Britain and Ireland" of 1868. 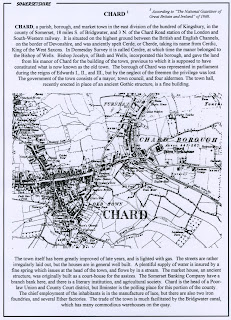 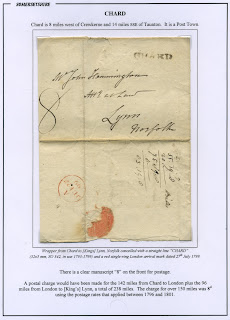 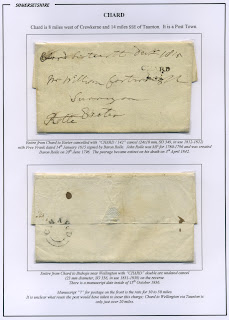 Email ThisBlogThis!Share to TwitterShare to FacebookShare to Pinterest
Labels: Chard

I've tried to build a list of the major milestones that affected the Postal service (excluding other services such as Telegrams, Telephone, Post Office Savings Bank, ....

And into the future ?
Any corrections, amendments or additions welcome !
Posted by Leamphil at 08:00 No comments:

Email ThisBlogThis!Share to TwitterShare to FacebookShare to Pinterest
Labels: Timeline

Up until 1795 South Petherton only had a private messenger service to Crewkerne; at that point it came on a route from Ilchester as shown on the plan proposed by the Surveyor, S. Lott, to Francis Freeling. 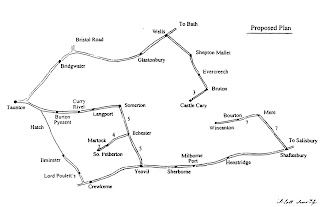 The entire shown below was sent from South Petherton to Chard in 1826 - the postal charge was 6d (for 20-30 miles) which matches a route of South Petherton - Ilchester - Yeovil - Crewkerne - Chard. Something changed in 1828 - perhaps South Petherton became a Post Town (the Proof Books show a "So. Petherton" undated circle cancel sent direct to South Petherton in May 1828) ?  The postal route also appears to have changed as shown by the entire below, also from South Petherton to Chard which is charged 5d (for 15-20 miles).  This is compatible with a route of South Petherton - Crewkerne - Chard. 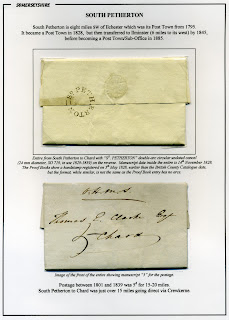 The following pages show examples of the 5th Clause Post to and from Bruton ("No.1" Receiving House"), and from Castle Cary ("No.2" Receiving House). (Apologies for some duplication with the previous post !). 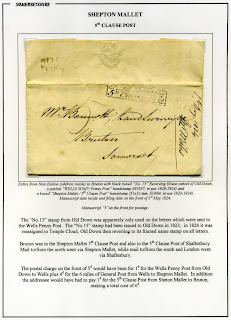 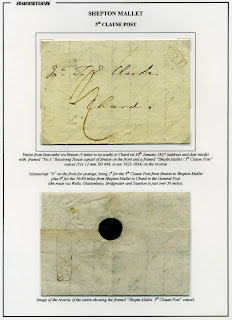 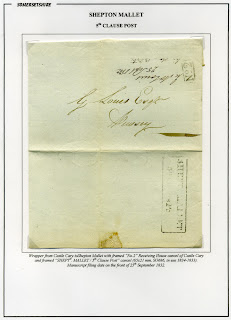