Unboxed "No.1" Receiving House handstamp through Cross in 1841

Receiving House handstamps continued to be used after the abolition of the local Penny Posts when the Uniform Penny Post was introduced in 1840.  They were generally used as despatch marks in the local village post offices, and this continued until the more general introduction of the undated circular handstamps from 1844. 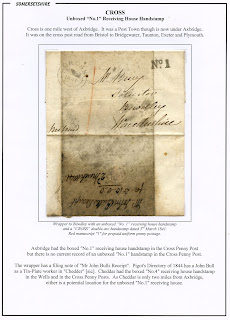 The wrapper has a filing note of "Mr John Bulls Receipt" and Pigot's Directory of 1844 has a John Bull as a Tin-Plate worker in "Chedder".  Both Cheddar and Axbridge were in the Cross Penny Post so either are potential locations for the unboxed "No.1" receiving house handstamp.