The envelope shown below has a KEVII 1d stamp with a "J.T.D" perfin, sent from Yeovil to Compton Pauncefoot.  The perfin was used by John Trevor Davies, a solicitor in Yeovil.  Perfins were used to prevent theft as the Post Office would not cash a stamp with perfins in (unlike normal stamps which could be exchanged for cash). 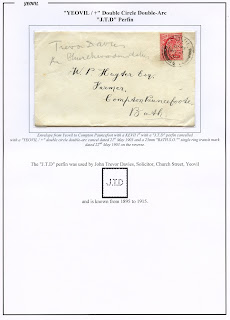 Somewhat later, here is another Yeovil perfin, this time a "R T / G" perfin sent within Yeovil in 1961.  The perfin was used by the Road Transport & General insurance company. 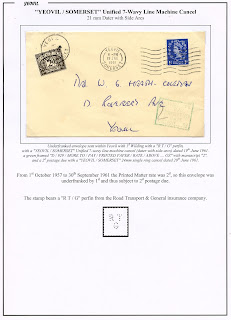