Underpaid Letter from USA to Weston-super-Mare, 1895 with Liverpool Packet mark

Here is an underpaid letter from Iowa to Weston-super-Mare.  It had a 2c stamp (the standard US domestic rate) rather than 5c, equivalent to 2½d which from 1892 was the standard UPU foreign mail rate. 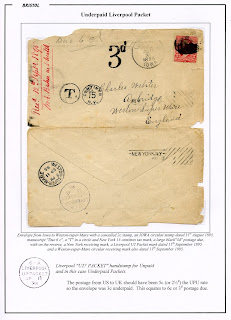 Among the many marks there is a circular Liverpool Packet mark "U2 PACKET" (not sure about the "2") which I think denotes an Unpaid or Underpaid Packet.  Any info gratefully received.
Posted by Leamphil at 08:00

Email ThisBlogThis!Share to TwitterShare to FacebookShare to Pinterest
Labels: Weston-super-Mare