The envelope below is going via Wells to London in February 1842, bears a reddish boxed “No.11” receiving house handstamp in addition to the Maltese Cross cancel and a “WELLS SOMERSET” circular cancel dated 14th February 1842. 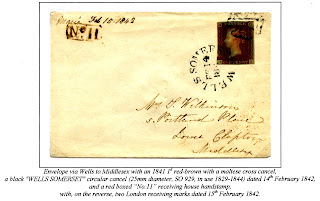