Acquired off the internet, the undated entire below has gone from Yeovil via Taunton and Bristol to Oxford via the cross post. The mileage is over 80 miles so would have been charged 4d, the rate for over 80 miles from 1711 to 1784. 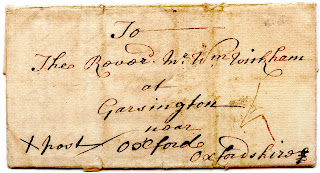 Undated entire from Yeovil to Garsington near Oxford, with mansucript “X post” and stylised “4” for postage. 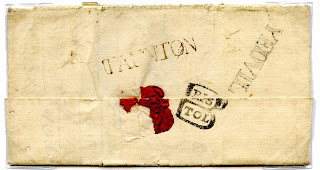 Based on the known dates for the Taunton handstamp, the entire is dated from between 1759 and 1769. This could match the date for the “YEOVIL” handstamp, SO 1042, known used in 1766, though the measurements are not precisely the same – the handstamp measures 34½x7½ mm, while SO 1042 is in the British County Catalogue as 35x8 mm. However the compilers of the BCC did not have the benefit of computers and scanners to be able to precisely measure their handstamps.
Posted by Leamphil at 08:00